Hypercalcemia is a common complication in cancer patients Mainly caused by Parathyroid hormone-related protein (PTHrP) secretion and metastasis. Calcitriol secretion is a rare source of hypercalcemia in solid tumors, especially in gastrointestinal stromal tumors (GIST). We present a case report of a female patient with a 23 cm gastric GIST that expressed somatostatin-receptors and presented with severe hypercalcemia due to calcitriol secretion. Calcium control was achieved with medical treatment before the use of targeted-directed therapies. Surgery was performed and allowed complete tumor resection. Two years later, patient remains free of disease. Molecular analysis revealed the mRNA expression of 25-hydroxyvitamin D3-1-hydroxylase (1αOHase) and vitamin-D receptors in the tumor cells, confirming the calcitriol-mediated mechanism. Furthermore, the expression of the endotoxin recognition factors CD14 and TLR4 suggests an inflammatory mediated mechanism. Finally, the expression of somatostatin-receptors, especially SST2 might have been related with clinical evolution and prognosis in this patient.

Humoral hypercalcemia of malignancy (HHM) is a common complication in cancer patients. Parathyroid hormone-related peptide (PTHrP) secretion is the most common cause, followed by metastatic bone disease (1, 2). Hypercalcemia due to 1,25-dihydroxyvitamin(OH)D3 [calcitriol;1,25(OH)2D3] overproduction is a rare cause of hypercalcemia (3). Specifically, sarcoidosis (49%), tuberculosis (8%) and lymphomas (17%) are the most frequent causes (4–7) of calcitriol-induced hypercalcemia; despite this, some other non-granulomatous diseases including solid tumors (5%) have been described (7). It is hypothesized that, in non-granulomatous diseases, macrophages and lymphocytes express 25-hydroxyvitamin D3-1-hydroxylase (1αOHase), which is responsible for conversion of 25-hydroxi vitamin D [25(OH)D3] to 1,25(OH)2D3, resulting in hypercalcemia due to increased calcium and phosphorus absorption from intestine and bone, but the exact pathophysiological mechanism is still not well understood (6, 8–11).

Very few cases of gastrointestinal stromal tumor (GIST) resulting in hypercalcemia have been reported. Among them, three have been related to calcitriol overproduction (3, 12–16). Calcitriol-mediated hypercalcemia seems to be associated with worse outcomes, suggesting that calcitriol might be a marker of high-grade tumors (17). Clinical management is challenging due to the limited information and the high associated mortality.

She was admitted for controlling hypercalcemia and to determine the underlying cause. CT showed a well-localized abdominal solid mass (23x13x18 cm), with necrotic-cystic zones, closely located to the lesser curvature of the stomach, and displacing the duodenum, pancreas, aorta and cave vein (Figures 1A, B). The 18-FDG PET/CT scan showed increased metabolic activity in the whole mass (Figures 1C, D). Additionally, a somatostatin receptor scintigraphy SPECT/CT revealed increased expression of somatostatin receptors (Figures 1E, F). The guided biopsy reported a low-grade (GIST with increased expression of CD34, DOG1 and CKIT. 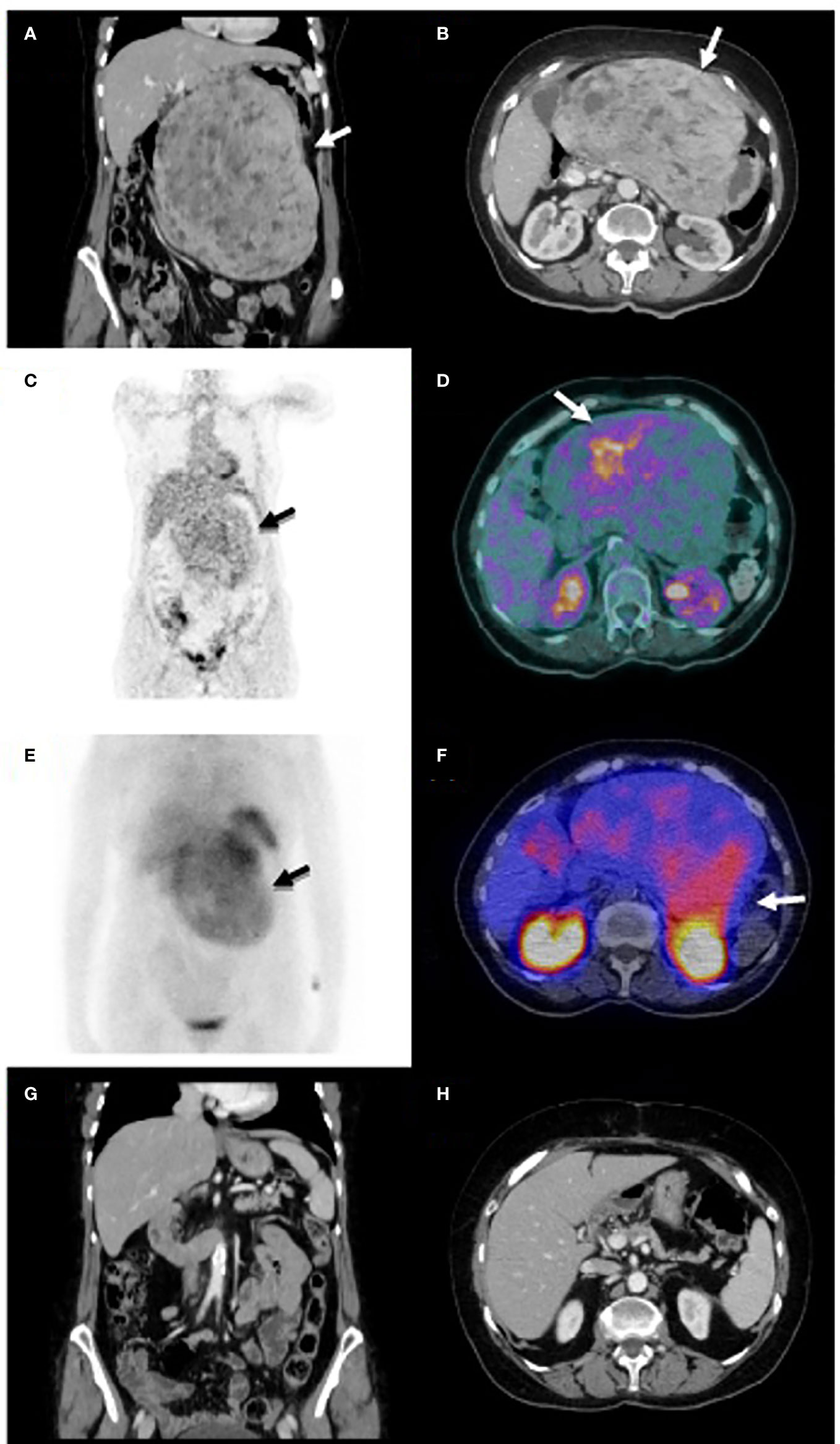 During admission, medical treatment with parenteral hydration, furosemide, intravenous corticoids and zoledronic acid was started. Patient was discharged with calcium levels of 13.2 mg/dL and close monitoring in the outpatient clinic. A single dose of denosumab 120 mg SC was administrated, and treatment with oral furosemide and corticoids (prednisone 1.5 mg/Kg body weight) was continued. Calcium was normalized after 6 weeks of treatment, and decreasing doses of corticoids and furosemide were started together with vitamin D supplementation. Imatinib was prescribed but administered during 6 weeks, since she presented with an atherothrombotic transient ischemic attack. Additionally, octreotide 10 mg IM was administered during three months. The evolution of serum calcium, calcitriol, other biochemical parameters and the respective treatment are depicted in Figure 2A. Surgery was performed five months after the diagnosis and total resection of the lesion was achieved (Figure 1G, H). According to the surgeon, tumor was smaller than expected according to the CT images. The pathology analysis revealed an 18-cm c-kit, CD34 and DOG1 positive GIST with necrosis and Ki67<1%. A mutation in exon 11 of the c-KIT gene was identified. Treatment was continued only with vitamin D. Fifty six months after diagnosis, the patient is asymptomatic, with normal serum calcium levels and no evidence of relapsed disease. 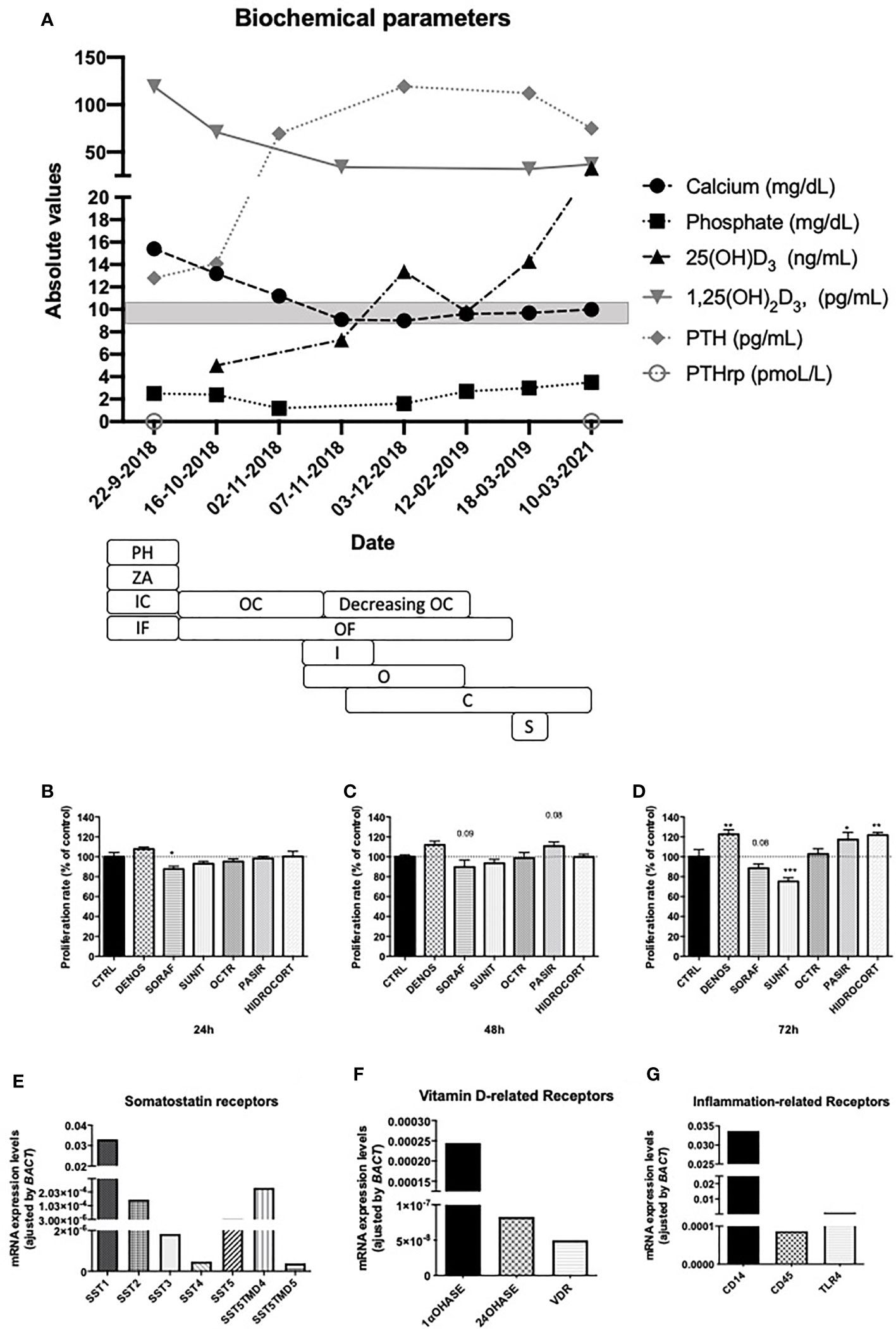 Serum calcium control was achieved in this patient before surgery, but the specific medical treatment and the underlying mechanism are unknown. According to the published cases, calcium control was not achieved in most of patients (18). Thus we aimed to evaluate the in vitro effects of the prescribed (or similar) drugs on cell proliferation, secretion and mRNA expression in a primary culture of the resected tumor. Specifically, hydrocortisone, denosumab, octreotide, pasireotide, sorafenib and sunitinib were evaluated. During the first 24h, sorafenib significantly decreased cell proliferation (Figure 2B), any significant change was observed after 48 hours (Figure 2C) but after 72h only sunitinib achieved this effect. Remarkably, denosumab, pasireotide and hydrocortisone increased cell proliferation at 72h (Figure 2D). Apoptosis and calcitriol secretion were undetectable (results not shown). The molecular analysis of tumor cells in the tumor sample reveled mRNA expression of somatostatin receptors (especially SST1, SST2 and the truncated receptor SST5TMD4; Figure 2E). Additionally, the mRNA expression of the enzyme 1αOHase was confirmed in the tumor sample, even the expression of the enzyme 25-hydroxyvitaminD324hydroxylase (24OHase), which hydroxylates 1,25(OH)2D3. mRNA levels of vitamin D receptors were also confirmed (Figure 2F). Furthermore, the expression of the inflammation related receptors CD14, CD45 and toll like receptor 4 (TLR4) were also confirmed (Figure 2G).

HHM affects approximately 20% of all cancer patients during their clinical course. In solid tumors, excessive secretion of PTHrP is the most common cause (80%). Structurally, PTHrP is similar to PTH in the first 13 amino acid sequences. In consequence, it binds the same receptor causing bone resorption, increased phosphate excretion and calcium reabsorption; but it does not have any effect on 1,25(OH)2D3 production (19). The second cause of HMM is bone metastases (20%), which release osteoclast activating factors, increasing bone-turnover and blood calcium levels. Commonly patients present with skeletal metastasis, low to low-normal PTH, PTHrP, and 1,25(OH)2D3 levels (19).

In our case the two most common causes of HHM, PTHrP secretion and bone metastasis, were excluded by negative PTHrP values and absence of metastasis in imaging. Hyperparathyroidism was also ruled out by decreased level of PTH. No other findings in the PET-CT scan and the absence of monoclonal protein in serum and urine excluded other solid tumors and multiple myeloma. The only mechanism that could explain hypercalcemia in our case was increased production of calcitriol by tumor cells, since elevated serum levels of calcitriol were observed at initial presentation and progressively decreased in parallel to calcium concentrations. After calcium normalization, PTH serum levels raised and physiologically responded to 25(OH)D3 serum levels.

GISTs comprise 1% of gastrointestinal tumors, these mesenchymal neoplasms most commonly arise in the stomach and small intestine (16). The incidence ranges 10–15 per million per year, affecting both sexes equally with a median age of 60 years-old (20). In >90% of cases activating mutations in KIT gene are present, producing significant amounts of KIT transmembrane receptor tyrosine kinase (21). Clinical presentation and tumor characteristics perfectly match with our case report.

Despite the uncommon clinical presentation, the main matter of discussion in this case is calcium response after medical treatment. Clinical response to calcitonin, zolendronic acid and corticoids has been previously described (3); additionally, partial or total calcium control has been reported in patients treated with imatinib (3, 13). It is well-known that management of GIST improved since systemic therapy with tyrosine kinase inhibitors (TKI) was started, among them, imatinib is considered prototype drug (22, 23). In our patient, a single dose of this drug was administered, but calcium serum levels were already normalized; similar situation occurred with octreotide, which was administered based on the somatostatin receptor scintigraphy SPECT/CT results. One, or both of them could have been responsible for decreased tumor size; the in vitro experiments showed that only a TKI decreased tumor proliferation after 72 hours of incubation. Importantly, according to the cited cases reports, calcium control was achieved in one patient in parallel with tumor response, but in the other patient, calcium control was lost one-year after treatment due to tumor progression (3, 13).

Interestingly, our case expressed somatostatin receptors on imaging and in the molecular analysis. This expression has been previously described (24). As in our case, SST1 and SST2 represented the most expressed receptors. Furthermore, SST2 has been considered as a prognosis factor in GIST tumors, since decreased SST2 expression has been associated with decreased recurrence-free survival. Based on this, medical treatment with somatostatin analogs has been suggested as a therapeutic option in advanced tumors with receptors expression (24). Importantly, two years after surgery, our patient remains asymptomatic and disease-free.

Other authors have also evaluated the underlying mechanisms of HHM. Specifically, the expression of 1αOHase has been reported as responsible for HHM in dysgerminomas, and the expression of this enzyme in combination with the endotoxin recognition factors CD14 and TLR4 in tumor cells suggested that inflammatory mechanisms would have been responsible for hypercalcemia (25). The expression of 1αOHase, CD14 and TLR4 was also observed in our case, and might represent the putative mechanism of hypercalcemia, thus treatment with high-dose corticoids was probably responsible for calcitriol secretion control. CD45 levels in our case also reveal the inflammatory nature of the tumor.

In conclusion, hypercalcemia in GIST tumor patients is a rare phenomenon. To the best of our knowledge, this is a very rare case of calcitriol secretion with appropriate control calcium levels before TKI use. Additionally, our case is the first one that demonstrate tumor 1α-hydroxylase activity and vitamin D receptor expression, which could explain the increased levels of calcitriol and subsequent hypercalcemia.

Informed consent has been obtained from the patient for publication of this case report and the accompanying images.

All authors have equally contributed with the preparation of this manuscript.

Copyright © 2022 Herrera-Martínez, Contreras González, Pedraza-Arévalo, Guerrero Martínez, Rodrigo Martínez, González Menchen, Blanco Molina, Gálvez-Moreno, Moreno-Vega, Luque and Herrera-Martínez. This is an open-access article distributed under the terms of the Creative Commons Attribution License (CC BY). The use, distribution or reproduction in other forums is permitted, provided the original author(s) and the copyright owner(s) are credited and that the original publication in this journal is cited, in accordance with accepted academic practice. No use, distribution or reproduction is permitted which does not comply with these terms.