Primary aldosteronism (PA) is defined as increased secretion of aldosterone by the adrenal cortex and suppressed activity of the renin–angiotensin system, which is clinically manifested as hypertension and hypokalemia (1). The prevalence of PA varied according to the population studied: it ranged from 3.2% to 12.7% in primary care and from 1% to 29.8% in referral centers (2, 3). Studies have demonstrated that patients with PA have more worse target organs of the heart and kidneys compared to patients with essential hypertension (4–7). Changes in left ventricular (LV) geometry, as an important target organ injury induced by elevated blood pressure, are independent predictors of cardiovascular events (8, 9). Early identification of the potential risk factors of changes in LV geometry plays an important role in preventing cardiovascular disease.

Vascular aging reflects the structural and functional changes of the large conduit arteries (10). Carotid intima-media thickness (cIMT), brachial–ankle pulse wave velocity (baPWV), and ankle–brachial index (ABI) are main evaluation indicators to detect the degree of vascular aging (11). The relationship between vascular aging and LV geometry patterns has been reported in a previous study. A recent study based on Northern Shanghai general populations revealed that baPWV, carotid-femoral PWV (cfPWV), and cIMT were associated with structural measurements of LV including relative wall thickness (RWT) with LV mass index (LVMI), and increased cfPWV and increased baPWV and decreased ABI were significantly associated with LV concentric geometry (LVCG) (12). A previous study found that cfPWV and baPWV were significantly correlated with LV hypertrophy (LVH) in a community-based elderly cohort (13). A prospective cohort study showed that baPWV had significant correlations with RWT and LVMI in untreated hypertensive patients, and baPWV was significantly increased in patients with LVH (14). Now, available studies are based on data from the general population and essential hypertension.

However, in PA, a population at high risk for cardiovascular events, the relationship between vascular aging and LV geometry has never been explored. In the present study, we aimed to investigate the association of the vascular aging parameter (baPWV, ABI, and cIMT) and LV geometry in new diagnosed patients with PA and to provide support for the assessment of target organ injury in the preliminary evaluation of PA.

The study participants were recruited from 1 January 2017 to 30 September 2021 at the Department of Cardiology, The Third Xiangya Hospital, Central South University, Changsha, China. The records of 146 patients with newly diagnosed PA were retrospectively collected in the database of the Third Xiangya Hospital. The inclusion criteria were as follows: (1) age ≥18 years old and (2) confirmed diagnosed with PA on this admission and not previously diagnosed with PA. The exclusion criteria were as follows: (1) missing echocardiography data; (2) simultaneously missing data of baPWV, ABI, and cIMT; (3) a definite diagnosis of other secondary hypertension; (4) serious heart disease (New York Heart Association functional classification ≥III) or severe chronic kidney disease [estimated glomerular filtration rate (eGFR) < 30 ml/min/1.73 m2]; (5) cardiovascular events within the last 6 months, including myocardial infarction or stroke; (6) suffered from cancer and other systemic diseases, including acute or chronic inflammatory diseases; and (7) pregnant or lactating women. The present study was approved by the Medical Ethics Committee of the Third Xiangya Hospital (Approval ID: I22013). All the patients signed informed consent at admission and agreed to share their health information for medical research.

Before screening and confirmatory tests, antihypertensive medicine with great influence on the aldosterone-to-renin ratio (ARR) was withdrawn at least 4 weeks according to the Endocrine Society’s clinical practice guideline (15). Patients with poor blood pressure control may be treated with alpha blockers or non-dihydropyridine calcium channel blockers, which have a lesser effect on ARR. Blood samples were collected to measure plasma aldosterone concentration (PAC) and plasma renin activity (PRA) in the morning after patients woke up and maintained a non-supine position (sitting, standing, or walking) for at least 2 h and sitting for 5–15 min. ARR was calculated as PAC/PRA. For patients with positive screening (ARR>20 ng·ml-1/ng·ml-1·h-1), further confirmatory tests were performed to confirm the diagnosis.

All patients with positive screening tests underwent seated saline suppression testing (SSST). PAC was measured basally at 08:00 and after the completion of an infusion of 2 L of normal saline in 4 h, and PA was diagnosed when PAC >10 ng·ml-1 after the infusion of 2 L of normal saline (15). Studies have confirmed that SSST is more sensitive than recumbent saline suppression testing (RSST) in the diagnosis of PA (16).

The ABI and baPWV were measured simultaneously with an automatic waveform analyzer (BP-203 RPE III; Omron, Dalian, China). The measurement was taken in the supine position after a rest period of at least 5 min. ABI was measured as the ratio of the systolic BP of the ankle artery to that of the brachial artery. The pulse waves of the brachial and posterior tibial arteries of the left and right limbs were measured to assess the transmission time between brachial and posterior tibial artery waveforms. The baPWV was calculated as the brachial–ankle distance divided by the transmission time (18). The average values of the left- and right-side assessments were calculated and used for analysis. ABI and baPWV were measured in 105 patients. Carotid ultrasonography was performed to measure cIMT using color Doppler ultrasound (Vivid E95; GE Healthcare, Massachusetts (MA), USA; or EPIQ 7C; Philips Medical Systems, Massachusetts (MA), USA). The cIMT represents the distance between two parallel echogenic lines corresponding to the lumen-intima interface and media-adventitia interface (19). The cIMT value used for analysis was defined as the average value of the left and right assessment. The cTMT was measured in 135 patients.

Echocardiography was performed by trained cardiologists using an available machine (Vivid E95; GE Healthcare, MA, USA or EPIQ 7C; Philips Medical Systems, MA, USA), according to the recommendation from the American Society of Echocardiography and the European Association of Cardiovascular Imaging (20). The LV internal diameter (LVID) at the end-diastole, interventricular septum (IVS), and posterior wall thickness (PWT) at the end-diastole were measured at the standard parasternal window. LV mass was calculated by a validated formula (20). LVMI was calculated with the formula (LV mass/body surface area) and RWT with the formula (2 × PWT/LVID) (20, 21).

This study included 146 patients with newly diagnosed PA. The characteristics of these patients are shown in Table 1. The participants’ mean age was 44.77 ± 9.79 years, and 46.58% of participants were female, with an elevated median value of systolic BP (160 mm Hg) and diastolic BP (96 mmHg). The duration of the hypertension of patients was 2.00 years, and approximately 60% of the patients were receiving BP-lowering drug treatment. The median of the baPWV value and cIMT value were 1,618 cm/s and 0.9 mm, respectively. The mean value of ABI was 1.15. Approximately 87.67% of the patients had abnormal LV geometry patterns. Approximately 50.68% of patients had LVH, and 83.56% had LVCG.

Table 2 Correlation of vascular parameters with LVMI and RWT. 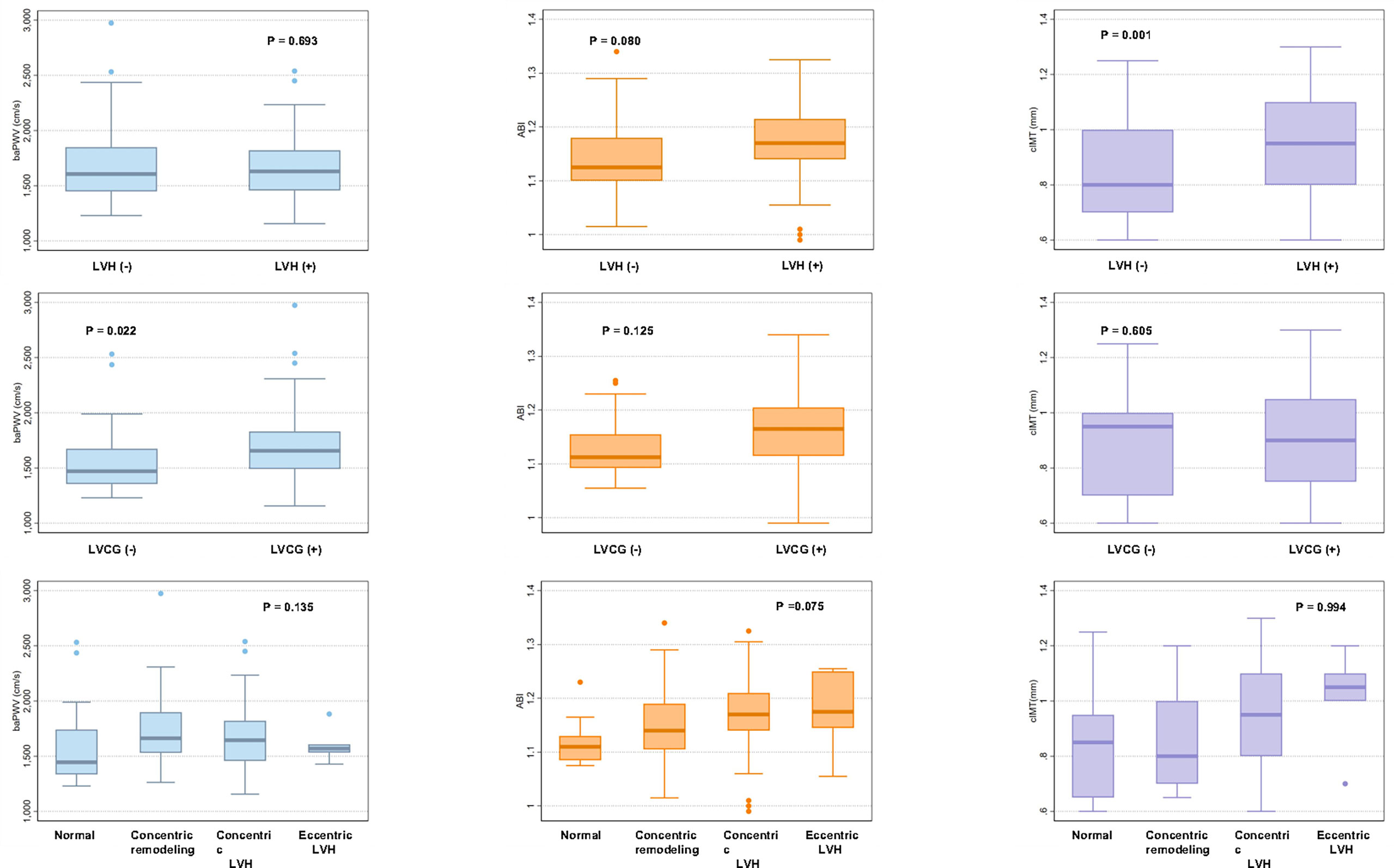 The change of LV geometry is a response to systemic and local hemodynamic changes and has also been described as target organ injury (22, 23). It is widely recognized that LV geometry changes are independent risk factors for cardiovascular events (24–26). A number of studies have examined the relationship between vascular aging parameters and LV geometry and found that they are closely related (12–14, 27–34). The Northern Shanghai Study (NSS) involving a community-dwelling older population suggested that baPWV, cfPWV, and cIMT were significantly associated with LVMI and RWT, and cIMT was significantly related to LVMI, even adjusting for conventional cardiovascular risk factors and diseases and treatments (12). A study investigated the association of baPWV with LV geometry in treatment-naive hypertensive patients, which found that baPWV had significant associations with RWT and LVMI and showed a fair discrimination ability of LVH (14). There were two studies that have assessed the relationship between cIMT and LV geometry in hypertensive patients (27, 28). A study on Italian hypertensive patients showed a significant correlation of cIMT and LVMI (28), and another study on Korean hypertensive patients found that cIMT was independently associated with RWT (20). Linde et al. demonstrated that increased cfPWV was also associated with LVH in non-elderly ischemic stroke survivors (32). However, those epidemiological results on the relationship of the vascular aging parameter and LV geometry were based on the general population or hypertensive patients.

Vascular remodeling in patients with PA mainly involves the increase of cells and extracellular matrix in the subintimal space and middle layer, which is manifested by vascular wall thickening, arterial stiffness, and subsequent vascular dysfunction (35, 36). BaPWV is an evaluation of arterial stiffness and reflects the elasticity of middle-sized and large arteries (37–39); cIMT is more reflective of the arterial wall structure throughout the body (40). A novel finding of our study is that baPWV was significantly associated with LVCG and cIMT was significantly associated with LVH in newly diagnosed PA. The study will provide a preliminary evidence of the association of the vascular aging parameter and LV geometry in patients with newly diagnosed PA. It is suggested that in newly diagnosed PA, early baPWV measurement has important clinical significance in assessing LV geometry changes and carotid vascular ultrasound in assessing LVH. The most plausible explanation for the association between vascular aging parameters and LV remodeling is that arterial stiffness and systemic changes in the vascular wall structure reflect the pressure pulse wave back to the LV more quickly, resulting in increased afterload of LV (41–43).

This study also has some limitations. First, since this study was retrospective, it could not provide a causal relationship between vascular parameters and LV geometry. Future studies could follow up the effects of increased baPWV or cIMT on LV geometry using a longitudinal design. Furthermore, we used baPWV as the indicator of arterial stiffness, while cfPWV is considered a gold indicator of arterial stiffness (18). However, the value of baPWV has been shown to be strongly associated with the value of cfPWV (44) and baPWV was better correlated with LV mass than cfPWV (45), suggesting baPWV as an acceptable indicator of vascular stiffness. In addition, our study participants were from a single center and the inclusion was Chinese patients, so that our results cannot be generalized to other groups of subjects with different demographics.

The present study suggested that baPWV was significantly and independently associated with LVCG and cIMT was significantly and independently associated with LVH in patients with newly diagnosed PA. This study provides insights on the importance of early baPWV and cIMT measurement in the assessment of LV geometry change in newly diagnosed PA.

This study was reviewed and approved by the Medical Ethics Committee of the Third Xiangya Hospital. The patients/participants provided their written informed consent to participate in this study.

The study was supported by the Key Research and Development program of Hunan Province (NO.2022SK2029), the National Natural Science Foundation of China Projects (NO.81800271).

Copyright © 2022 Huang, Li, Zhao, Chen, Li and Jiang. This is an open-access article distributed under the terms of the Creative Commons Attribution License (CC BY). The use, distribution or reproduction in other forums is permitted, provided the original author(s) and the copyright owner(s) are credited and that the original publication in this journal is cited, in accordance with accepted academic practice. No use, distribution or reproduction is permitted which does not comply with these terms.