Matthew B. Grisham2 and

Experimental models of colitis in mice have been used extensively for analyzing the molecular events that occur during inflammatory bowel disease (IBD) development. However, it is uncertain to what extent the experimental models reproduce features of human IBD. This is largely due to the lack of precise methods for direct and comprehensive comparison of mouse and human inflamed colon tissue at the molecular level. Here, we use global gene expression patterns of two sets of pediatric IBD and two mouse models of colitis to obtain a direct comparison of the genome signatures of mouse and human IBD. By comparing the two sets of pediatric IBD microarray data, we found 83 genes were differentially expressed in a similar manner between pediatric Crohn’s disease and ulcerative colitis. Up-regulation of the chemokine (C–C motif) ligand 2 (CCL2) gene that maps to 17q12, a confirmed IBD susceptibility loci, indicates that our comparison study can reveal known genetic associations with IBD. In comparing pediatric IBD and experimental colitis microarray data, we found common signatures amongst them including: (1) up-regulation of CXCL9 and S100A8; (2) cytokine–cytokine receptor pathway dysregulation; and (3) over-represented IRF1 and IRF2 transcription binding sites in the promoter region of up-regulated genes, and HNF1A and Lhx3 binding sites were over-represented in the promoter region of the down-regulated genes. In summary, this study provides a comprehensive view of transcriptome changes between different pediatric IBD populations in comparison with different colitis models. These findings reveal several new molecular targets for further study in the regulation of colitis.

Ulcerative colitis (UC) and Crohn’s disease (CD) are the two major forms of inflammatory bowel disease (IBD). The incidence rate of pediatric CD in the US is 43 per 100,000 and 28 per 100,000 for pediatric UC (1). As recently reported, the incidence and prevalence of pediatric IBD is rising in both developed and developing countries (2). Growth retardation poses a significant threat to the quality of life of 15–40% of children and adolescents with IBD (3). Although environmental factors, microbes in the gastroenterological tract, genetic susceptibility, and immune system dysfunction have been implicated, the etiology of pediatric IBD remains incompletely understood.

Two sets of pediatric IBD microarray data were uploaded to GeneSifter software1 and normalized for comparison by Robust Multichip Average (RMA) method. The gene expression difference threshold was set to 2 with no upper limit. Data were analyzed with a Student’s t-test followed by a Benjamini and Hochberg post test to limit false discovery rates, as we previously reported (7).

To see the relationship between differentially expressed genes, the selected genes identified as dysregulated in pediatric CD and pediatric UC microarray data were then imported to IPA2 for network analysis. Genes that were related to each other in biological functions and/or diseases were organized into networks according to the Ingenuity Pathways Knowledge Base (IPKB). IPKB is a database derived from the data mining of the expression of and functional relationships between molecules; this information was extracted from published papers found in NCBI PubMed, Medline, and several other databases.

To identify common properties of promoter regions of differentially expressed genes, the Affymetrix gene ID of identified genes in pediatric UC and CD were uploaded to the cREMaG system3 (8). The sequence upstream the transcription start site (TSS) is 5000 base pairs, and the downstream sequence of TSS is 1000 base pairs. Promoter sequences were scanned with TFBS matrices obtained from the JASPAR database and the public release of the TRANSFAC database using the TFBS BioPerl module (9, 10). The top 10 of the most over-represented binding sites were selected for comparison analysis.

By directly comparing differential gene expression between human and mouse inflamed colon tissue, we assessed the similarity between human and mouse colitis. The dysregulated gene in DSS-colitis (GEO data base accession number GSE22307) and T-cell transfer colitis model (accession number GSE27302) were divided into eight classes according to the genes expression trends. In the DSS-colitis model, there were 1609 genes that were significantly altered during the colitis development, with 501 progressively up-regulated genes and 173 progressively down-regulated genes (7). In the T-cell transfer colitis model, there were 1775 gene expressions that were significantly changed, with 341 progressively up-regulated genes and 361 progressively down-regulated genes (6). The two sets of microarray data were obtained by using the same platform, Mouse Genome 430 2.0 Array (Affymetrix), which provided the most comprehensive annotated coverage of the mouse genome, composing of over 34,000 well-characterized mouse genes. The genes whose expression progressively changed were correlated with inflammation development and were selected for promoter binding sites analysis. The over-presented promoter binding sites were further compared with the over-presented binding sites obtained from pediatric IBD array data. 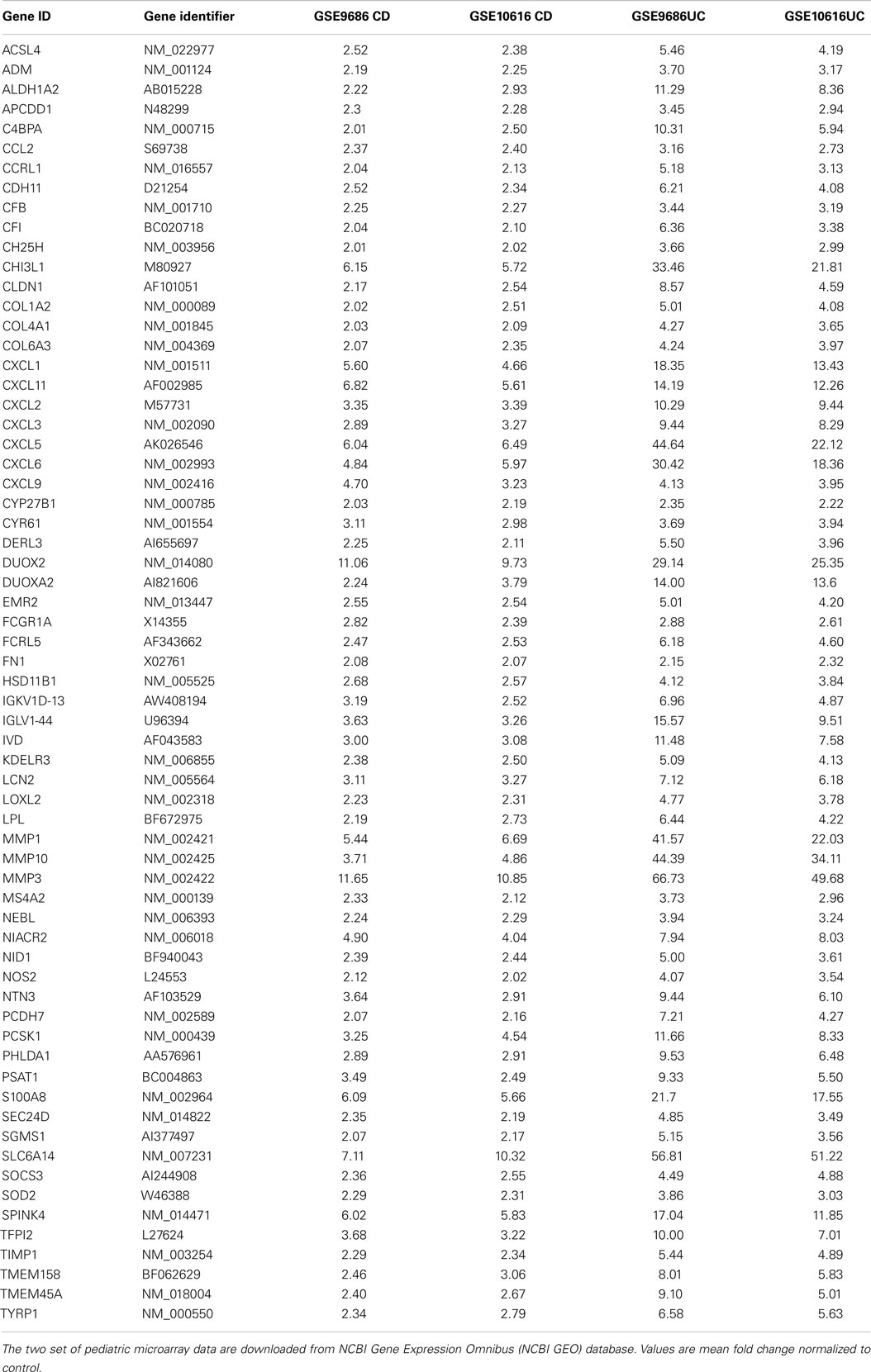 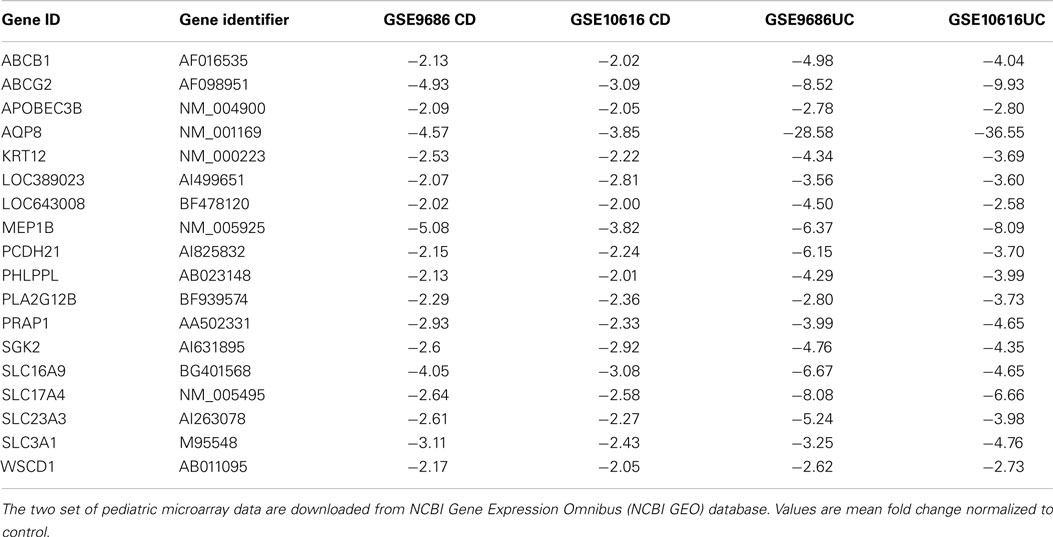 Of the down-regulated genes, four were solute carrier genes: SLC16A9, SLC17A4, SLC23A3, and SLC3A1. The functions of those down-regulated genes related to the transport of amino acids (20), monocarboxylate (21), glutamate (22), sodium-phosphate (23), and ascorbic acid (24).

Figure 2 shows the first network of pediatric CD inflamed colon tissue differentially expressed genes with their cell-to-cell signaling functions and their interactions, as they relate to gastrointestinal and hepatic system disease. As shown in Figure 2, the transcription of nine chemokine genes was up-regulated, and those genes indirectly react with the NF-κB complex. Figure 3 shows the network 2 differentially expressed genes in pediatric CD inflamed colon tissue, which is composed of 15 up-regulated genes with functions related to connective tissue and genetic disorders. MMP-1 and MMP-3 are located in the center of pediatric CD network 2. ChI3l1 is also implicated in this network through its indirect reaction with IGFBP5. 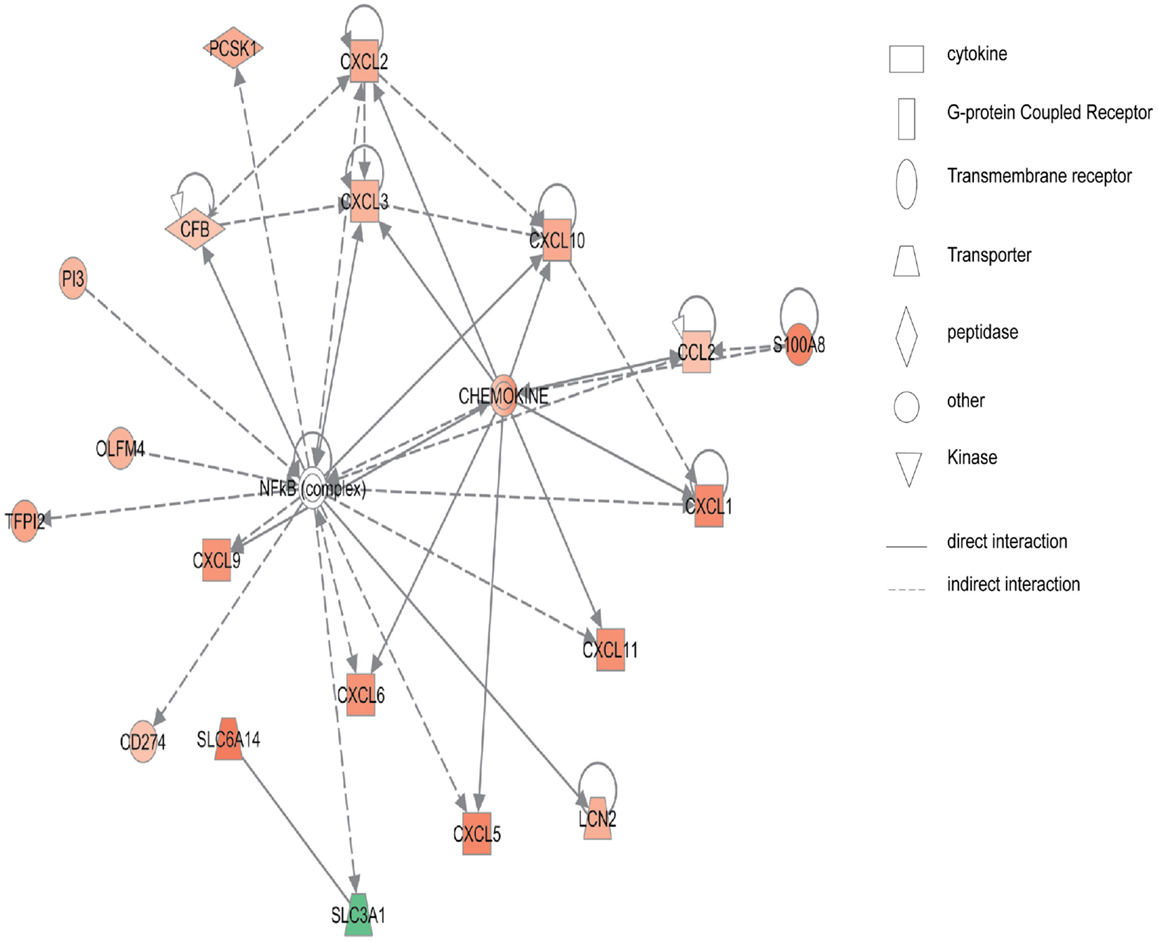 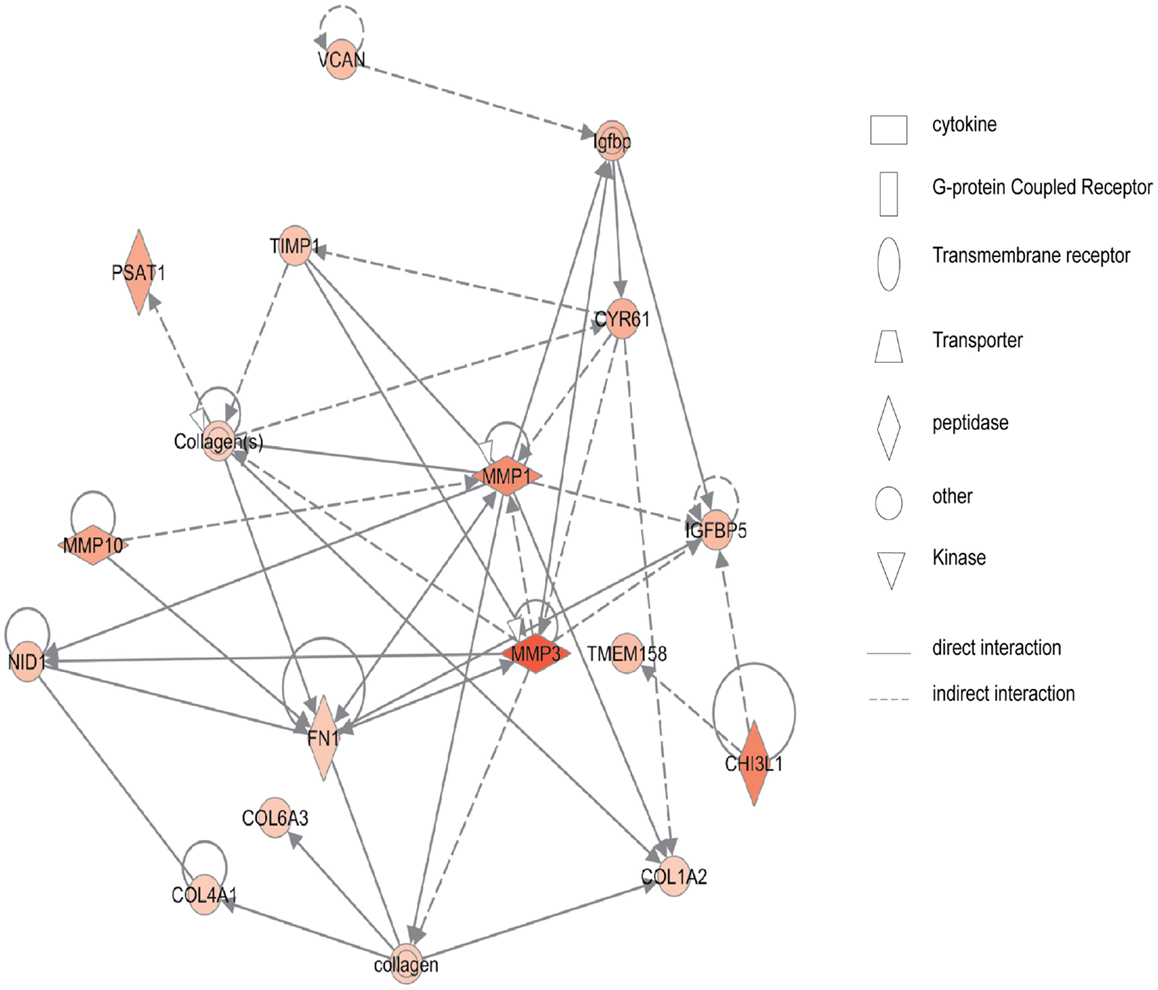 Figure 4 shows the first network of pediatric UC with functions related to cellular movement and signaling. Pediatric UC network 1 is mainly composed of eleven G-protein-coupled receptors, which were all up-regulated. Transcription of eight members of the collage family was up-regulated as shown in Figure 5, with functions related to connective tissue. Interestingly, ChI3L1 was in the center of the pediatric UC network 2 (Figure 5), and ChI3L1 indirectly interacts with COL16A2 and TNC. 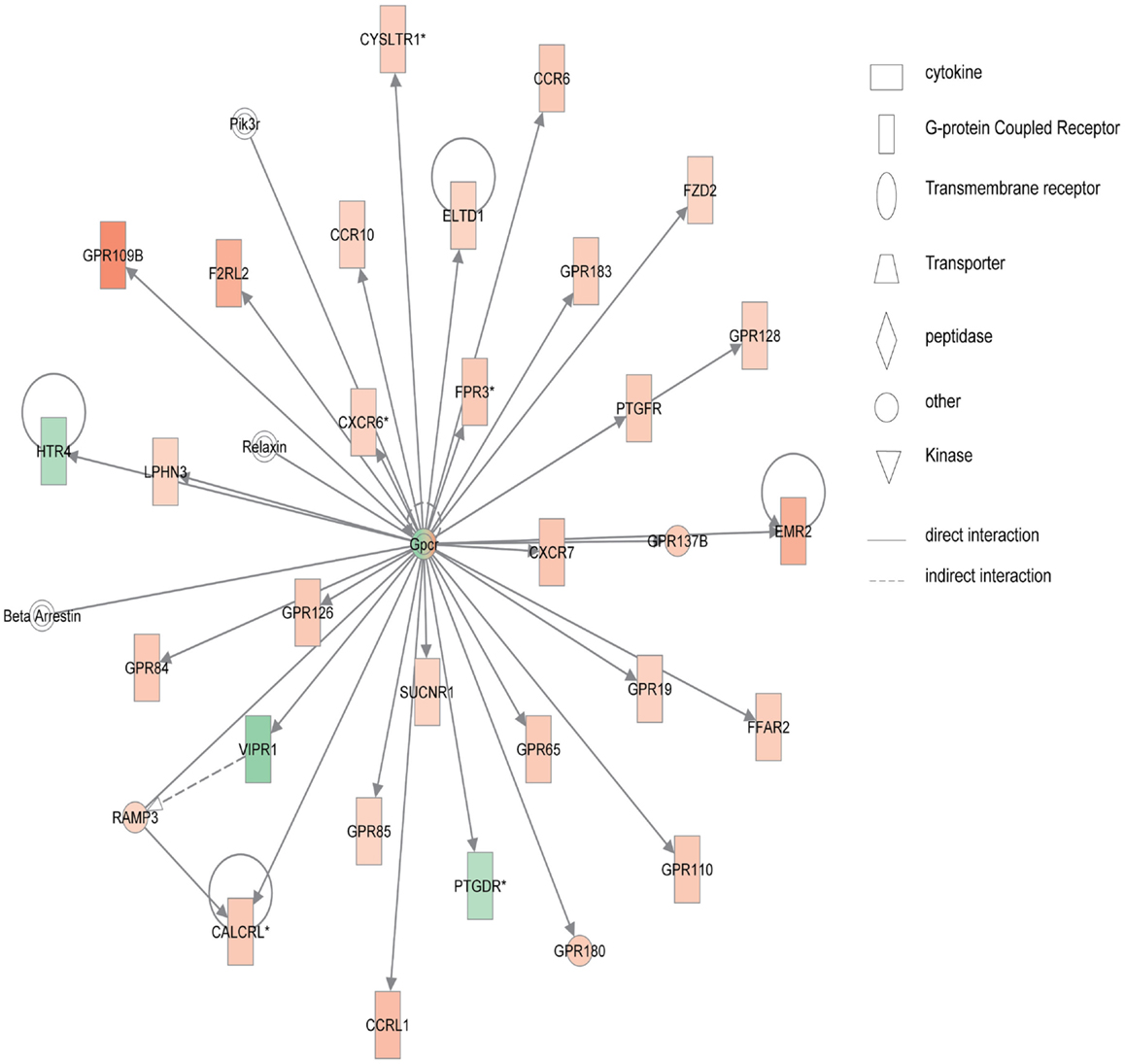 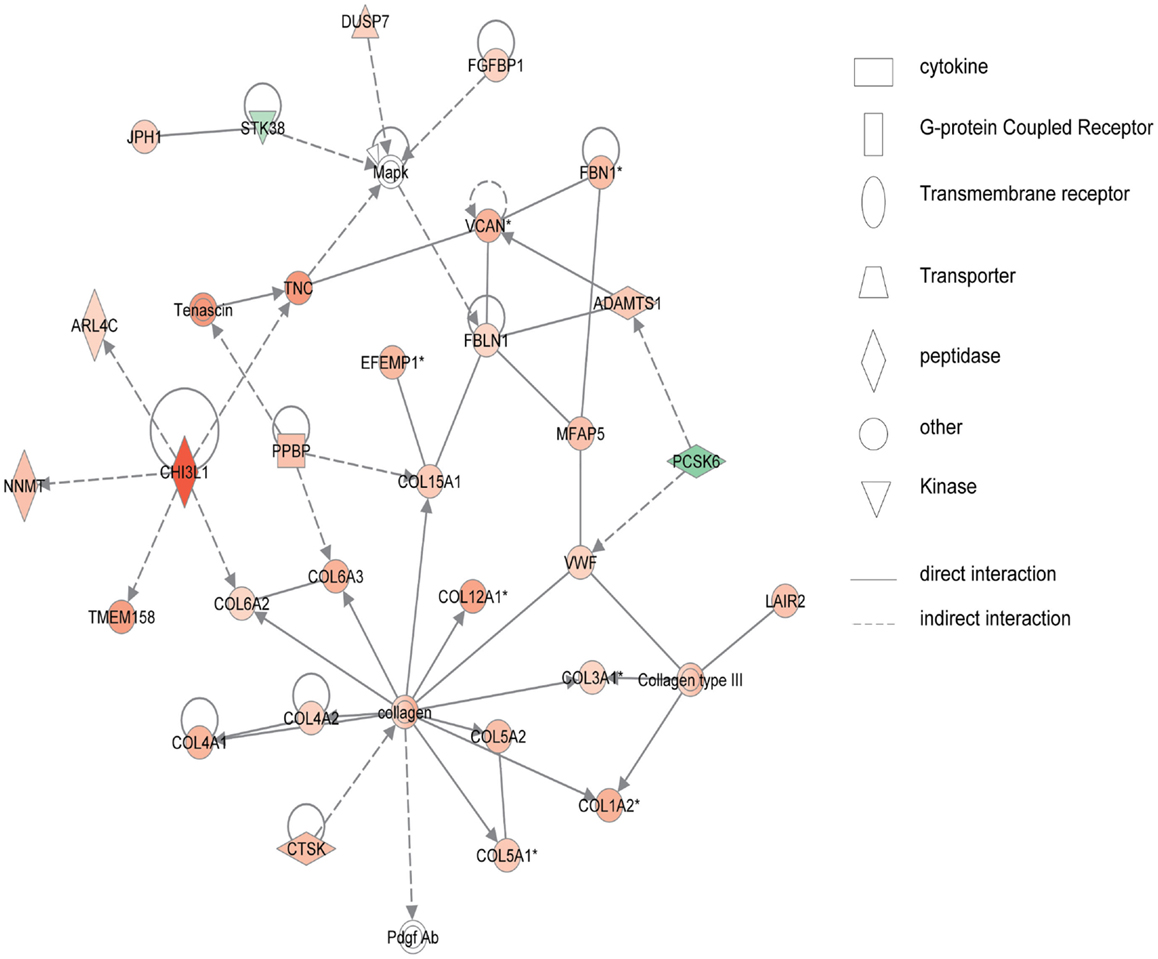 Comparison of differentially expressed genes in pediatric IBD and progressively up-regulated or down-regulated genes in experimental colitis is shown in Table 3 and Figures 6 and 7. The comparison of the over-presented promoters in the differentially expressed genes is shown in Table 4. Among them, the cytokine–cytokine receptor pathway was dysregulated in all the four sets of microarray data. CXCL9 and S100A8 were up-regulated in all the four sets of microarray data. The expression of S100A8 was also found to be up-regulated in the trinitrobenzene sulfonic acid (TNBS)-induced colitis rat model and T-cell-mediated colitis in SCID mice (25, 26). 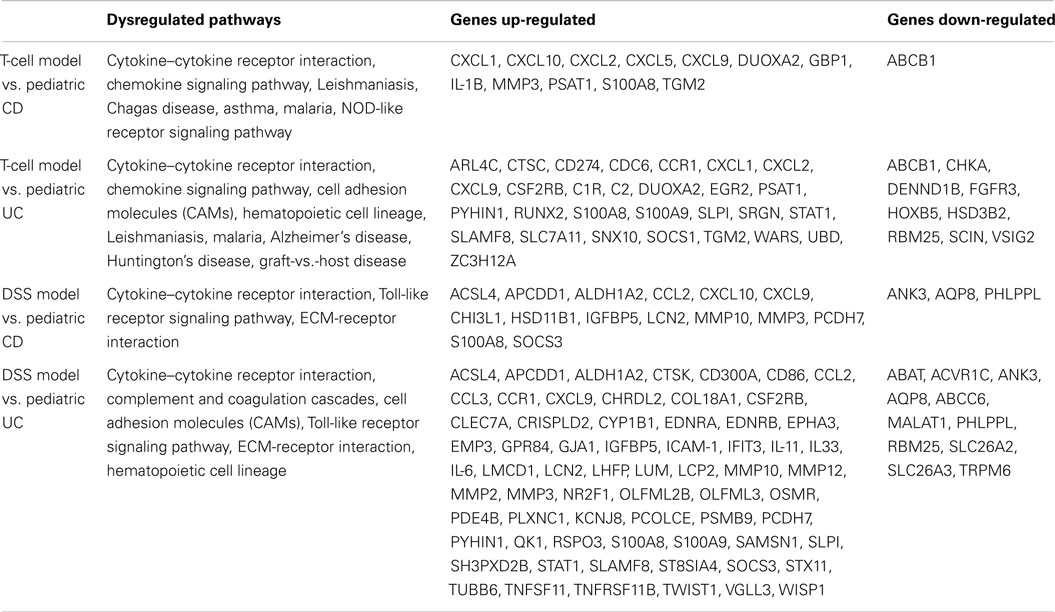 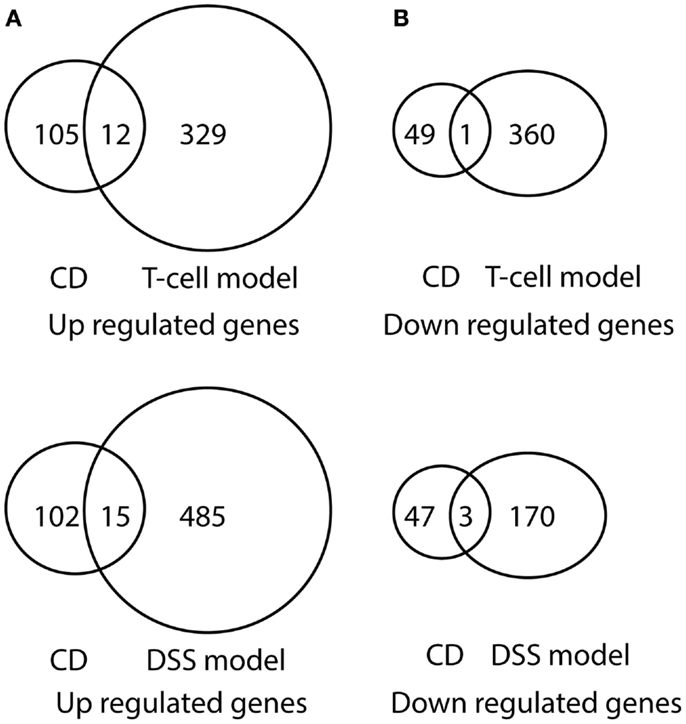 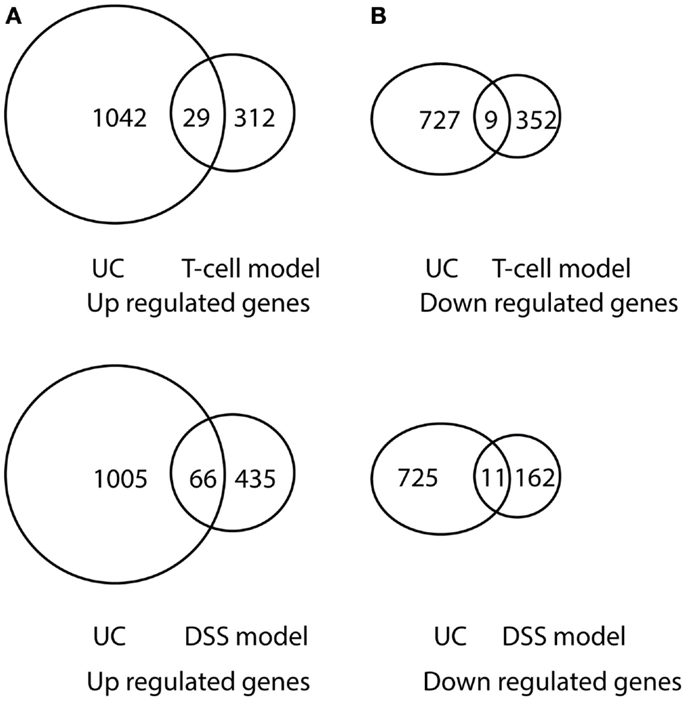 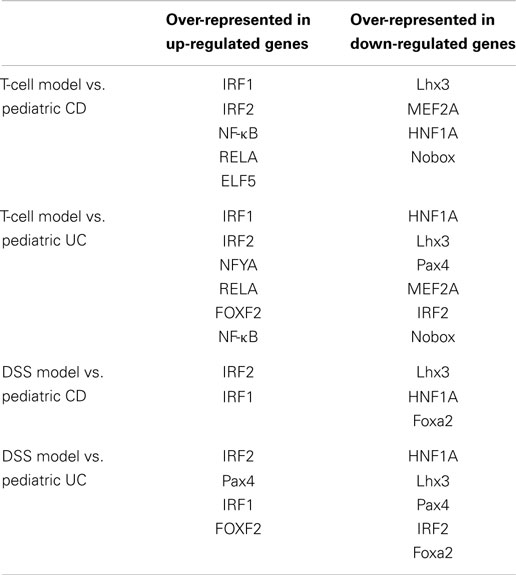 Promoter analysis provided the possible common regulatory mechanism of the expression of the dysregulated genes. As shown in Table 4, the IRF1 and IRF2 binding sites were over-represented in the up-regulated genes in pediatric IBD and experimental colitis. The HNF1A and Lhx3 binding sites were over-presented in the down-regulated genes in the four sets of microarray data. HNF1A is a transcription factor that regulates the expression of cytokine-driven C-reactive protein, which is a clinical marker of inflammation (27). Lhx3 is a transcription factor that is required for pituitary and motor neuron development (28).

Our microarray analysis revealed that chitinase 3-like 1 (cartilage glycoprotein-39, CHI3L1) was up-regulated in pediatric IBD samples. CHI3L1 has the ability to enhance the adhesion and internalization of bacteria in epithelial cells (29). In vivo, neutralizing CHI3L1 with an antibody suppresses DSS-induced colitis, and this neutralization dramatically decreases bacteria adhesion and invasion of epithelial cells. It has been demonstrated that CHI3L1 expression is up-regulated in epithelial cells under inflammatory conditions. CHI3L1 also activates Akt signaling in epithelial cells through its chitin binding motif, and increases secretion of IL-8 and TNF-α in a dose-dependent manner (30). Fecal CHI3L1 levels are positively correlated with pathology score (31). Serum concentration of CHI3L1 is also elevated in IBD patients (32). Thus, CHI3L1 might be selected as both a target and a marker of pediatric IBD.

Cysteine-rich, angiogenic inducer 61 (CYR61 or CCN1) was up-regulated in pediatric IBD. It has been demonstrated that CCN1 up-regulates pro-inflammatory gene transcription, such as TNF-α, IL-1α, IL-1β, IL-6, and IL-12b in mice macrophages (33). This induction results from CCN1 direct activation of NF-κB and increased TNF-α synthesis. CCN1 supports macrophage adhesion through integrin αMβ2 and syndecan-4. Because mice lacking CCN1 cannot develop in utero, involving vascular defects in the placenta, CCN1 is also related with vasculogenesis during embryogenesis (34). Moreover, CCN1 construct transfected mice showed increased angiogenesis in colon tissue (35). Together, these suggest that CCN1 might be a unique target to treat pediatric IBD through inhibition of pro-inflammatory gene expression and angiogenesis.

Chemokine (C–C motif) ligand 2 (CCL2), also known as monocyte chemotactic protein-1 or small inducible cytokine A2, was up-regulated in pediatric inflamed colon tissue. CCL2 attracts monocytes, memory T cells, and dendritic cells to sites of tissue injury, infection, and inflammation (36, 37). Interestingly, CCL2 is located in the confirmed CD and UC susceptibility loci 19q12 (38, 39). Increased expression of CCL2 (Table 1) in pediatric inflamed colon tissue supports the idea that CCL2 might be one of the causal genes of pediatric IBD. Interestingly, this has been demonstrated by nanomolar concentrations of CCL2 stimulating inflammatory responses of monocytes and effector T cells, whereas picomolar CCL2 exerts a global suppressive effect on T-cell trafficking into inflamed lymph nodes (40), as confirmed by picomolar levels of CCL2 ameliorating TNBS- and DSS-induced colitis (41). Thus, before targeting CCL2 for IBD therapy more information is needed regarding its dose effect on human colon tissue inflammation responses.

Promoter analysis provided potential targets at the transcription factor level. NF-κB transcription factors are comprised of five family members in mammalian cells: RelA (p65), RelB, c-Rel, p50/p105 (NF-κB1), and p52/p100 (NF-κB2). Those members form homo- or hetero-dimers of NF-κB complexes to regulate the expression of a variety of genes (43). Interestingly, Stronati et al. found that nuclear NF-κB and the binding activity of NF-κB to a consensus DNA sequence were significantly increased in the inflamed mucosa of patients, compared to controls (44). In IBD patients, the increased NF-κB expression in mucosal macrophages is accompanied with an increasing capacity of these cells to produce and secrete TNF-α, IL-1, and IL-6 (45). Many of the established immunosuppressive drugs for IBD, like corticosteroids, play anti-inflammatory roles, at least partly via the inhibition of the NF-κB activity (46). The fact that the NF-κB binding sites are over-represented in the T-cell transfer colitis model, combined with the fact that the NF-κB binding sites are over-represented in pediatric IBD inflamed colon tissue suggests that NF-κB likely plays an important role in pediatric IBD. In agreement with this idea, NF-κB has been extensively studied, and different ways to block NF-κB have been evaluated for IBD treatment. Unfortunately, due to significant side effects and liver toxicity, optimal ways to block NF-κB to treat IBD has not been realized (47).

Interferon regulatory factor-1 and -2 (IRF1 and IRF2) are transcription factors that regulate expression of inflammatory-related genes, but are primarily identified as transcription factors which regulate the human IFN-α/β gene (48). Interestingly, our promoter analysis showed that binding site of IRF1 and IFR2 are over-represented in the pediatric IBD up-regulated genes. Additionally, Clavell et al. found increased expression of IRF1 in lamina propria mononuclear cells from patients with CD (49). Compared with wild-type mice, production of TNF-α and IFN-γ in IRF1−/− mice is greatly impaired (50). Mice with a target mutation in IRF2 (IRF2−/−) exhibit significant inhibition of IL-12, IL-12R, IFN-γ, IL-1 β, and IL-6 expression (51). It has been demonstrated that IRF2 recruits the NF-κB transcription factor into the nucleus via physical interaction, which enhances TNF-α-induced NF-κB transcription (52). Thus, IRF1 and IRF2 have the potential to be selective and potentially effective targets for the treatment of both experimental colitis and pediatric IBD.

The Supplementary Material for this article can be found online at https://www.frontiersin.org/article/10.3389/fimmu.2015.00165/abstract

Copyright: © 2015 Fang, Grisham and Kevil. This is an open-access article distributed under the terms of the Creative Commons Attribution License (CC BY). The use, distribution or reproduction in other forums is permitted, provided the original author(s) or licensor are credited and that the original publication in this journal is cited, in accordance with accepted academic practice. No use, distribution or reproduction is permitted which does not comply with these terms.