Infection with cytomegalovirus (CMV) is associated with expansion of a subset of NKG2C-expressing natural killer (NK) cells (1). Such expansions have also been observed in CMV seropositive individuals infected with other infections such as hantavirus (2), HIV-1 (3, 4), and EBV (5). Expanded NK cell populations expressing the activating NKG2C receptor, or CD2 in the case of homozygous deletion of the NKG2C gene (6), are often dominated by the expression of a single inhibitory killer-cell immunoglobulin-like receptor (KIR) receptor (7). NK cell populations with these phenotypic traits have memory-like features including the lack of adaptor proteins EAT-2 (8) and FcεR1γ (9, 10) and have distinct epigenetic characteristics compared to non-expanded NK cells (8, 10, 11).

Cytomegalovirus-driven NK cell-expansions have been reported in viral hepatitis infections (12). Furthermore, increased NKG2C-expressing NK cell populations have been observed in patients with chronic hepatitis B virus (HBV) infection (13) or hepatitis C virus (HCV) infection (14). NK cell expansions in CMV seropositive HCV-infected patients share phenotypic traits with expansions found in healthy controls including loss of the FcεR1γ adaptor (15) and superior capacity to respond to CD16 stimulation (12, 15). However, the extents to which different hepatitis virus infections contribute to or modify these NK cell expansions are unknown.

To study this, we examined NK cell expansions in HBV-, HCV-, and hepatitis delta virus (HDV)-infected patients in the context of underlying CMV infection by studying the expression of differentiation markers and inhibitory KIRs on NK cells. The results suggest that the presence of adaptive-like NK cell expansions seen in HBV, HCV, and HDV infections is primarily caused by the underlying CMV infection, and not significantly influenced by the hepatitis virus infections per se.

Peripheral blood mononuclear cells (PBMCs) from patients used in this study were collected at the outpatient clinic of the Department of Gastroenterology, Hepatology, and Endocrinology at Hannover Medical School in Germany. A total of 24 HBV, 18 HCV, and 28 HDV patients were analyzed, of which 20, 12, and 24 were CMV seropositive, respectively. The detailed clinical characteristics of these patients have been reported previously (16). PBMCs from 29 healthy donors, of whom 23 were CMV seropositive, were collected at the Karolinska University Hospital, Stockholm, Sweden. PBMCs were isolated through standard density-gradient separation and cryopreserved for deferred analysis.

Since expanded NK cell subsets have narrow KIR-repertoires often dominated by a single inhibitory receptor, different statistical strategies aimed at identifying outliers have previously been utilized to identify NK cell expansions (7, 18, 19). For cohorts significantly larger than ours, the Chauvenet criterion has been applied to select for NK cell expansions combined with cellular maturation (7, 18). However, along with our smaller cohorts, the lower expression of some KIRs during hepatitis infections may affect selection. In line with how we previously identified NK cell expansions (19), a variation of the Tukey’s range test accounting for the cohort size was utilized to identify potential NK cell expansions. In more detail, CD56dim NK cells were subdivided into subsets based upon their expression of NKG2A and NKG2C. Subsequently, the expression repertoire of KIR2DL1, KIR2DL3, and KIR3DL1 was assessed. Particular KIR-defined subpopulations were considered as expanded populations if their population frequency was greater than one interquartile range above quartile three in each cohort. Threshold population sizes of either 5 or 20% were both analyzed. Further ensuring that the particular KIR-expressing NK cell subpopulation was a substantial constituent of the NK cell subset (e.g., NKG2A−NKG2C+), it was required to be greater than quartile one of the NK cell subset. Finally the geometric MFI of CD57 on the KIR-expressing NK cell subpopulation had to be greater than the geometric MFI of the subject’s total CD56dim NK cells, ensuring that the identified outliers contained terminally differentiated NK cells (7, 20). Identifications of NK cell expansions were performed using Microsoft Excel version 14.4.3 (Microsoft Corporation, Washington, USA). Data were analyzed using Prism version 5.0d (GraphPad Software Inc., CA, USA). For the discrete statistics, non-parametric tests were used as outlined in the respective figure legends.

First, NK cell differentiation-associated receptors NKG2A, CD57, and NKG2C, as well as inhibitory receptors KIR2DL1, KIR2DL3, and KIR3DL1 were stained for on CD56dim NK cells (Figure 1A). Expression of these markers was assessed in relation to CMV serostatus in the entire study cohort. As expected from previous reports (1, 21), CMV infection was associated with a higher frequency of CD56dim NK cells expressing NKG2C and CD57, and with lower NKG2A expression compared to CMV seronegative individuals. However, CMV serostatus did not significantly alter expression of individual KIRs (Figure 1B). 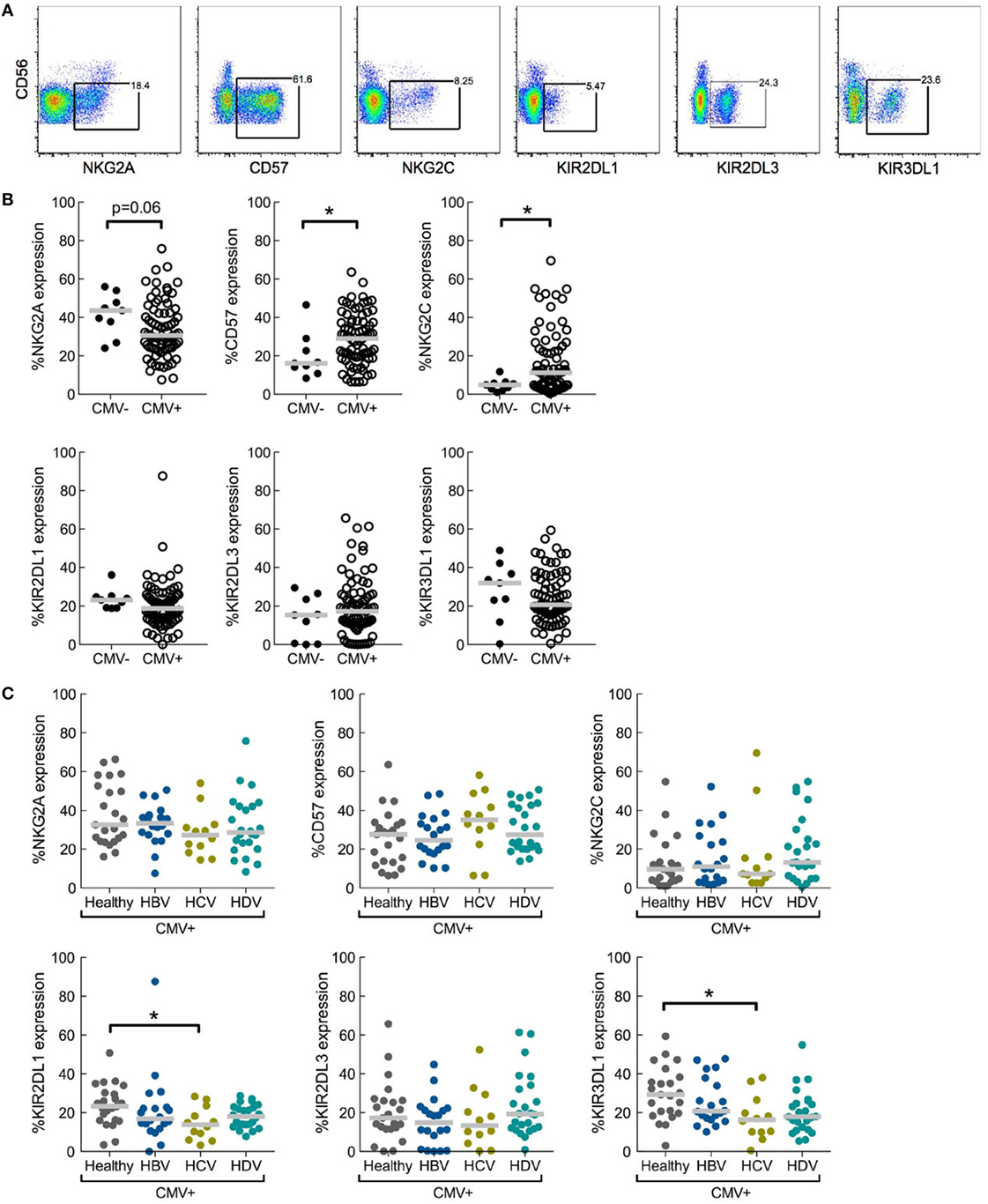 A recently published study including the same patient cohorts indicated that there was no overall difference in the expression of inhibitory KIRs on NK cells during hepatitis infection compared to healthy controls (16). However, in that report expression patterns of individual KIRs were not assessed. Here, a more detailed examination was performed. NK cells from CMV seropositive HCV-infected patients showed a significant decrease in expression of KIR2DL1 and KIR3DL1 relative to healthy controls, while expression of KIR2DL3 was unaltered (Figure 1C). HBV infection and HDV infection had no significant impact on KIR expression (Figure 1C).

As described, expansions of NKG2C+ NK cells with a specific KIR-repertoire driven by CMV infection have been observed in chronic hepatitis virus infections (12). However, whether hepatitis virus infection affects the prevalence of these expansions is unknown. Adaptive-like NK cell expansions have previously been identified based on deviations in KIR expression profiles, using statistical strategies such as the Chauvenet criterion (7, 18) and the Tukey’s range test (19), combined with cellular differentiation. As our analysis included patients with different hepatitis infections, likely affecting receptor expression to varying degrees, each group was analyzed separately. NK cell subsets were assessed for the presence of expansions (see Materials and Methods) and quantified (Figures 2A–C). For both NKG2A−NKG2C− and NKG2A−NKG2C+ NK cell subsets, there was no overall difference in the number of CMV seropositive individuals with NK cell expansions, irrespective of chronic hepatitis virus infections (Figure 2D). Since only 9 out of 88 studied patients were CMV seronegative, it was not possible to determine the influence of chronic viral hepatitis on potential expansions within this cohort. Together, we conclude that there is no difference between the prevalence of adaptive-like NK cell expansions observed in CMV seropositive subjects with HBV, HCV, and HDV infection as compared to CMV seropositive healthy controls. It has been previously shown that KIR2DL2/3 is the most frequently expressed KIR on expanded adaptive-like NK cells during chronic hepatitis virus infections (12). While, we were unable to KIR genotype the present patient cohort, to allow us to precisely examine KIR2DL2 expression, we did observe maintenance of KIR2DL3 expression and down-regulation of KIR2DL1 and KIR3DL1 in chronic hepatitis C compared to healthy controls (Figure 1C). This is in line with previous results from other groups (13, 24). Preservation of expression of KIR2DL3 may be due either to immune adaptation or selective pressure in response to hepatitis infection. Intriguingly, it was recently shown that HCV sequence variation in core protein-derived HLA-presented epitopes alters the binding of KIR2DL3 to its HLA-ligand with functional consequences for NK cells suggesting a potential pathway for viral escape via KIR2DL3 (25).

There are contradictory results regarding NKG2C expression on NK cells during hepatitis infections. A systematic review suggested increased levels of NKG2C on CD56dim NK cells during HBV infections relative to healthy donors (26). Further, levels of NKG2C in HBV infections were shown to be greater than those in HCV infections (13), while others have seen increased NKG2C during HCV infection (24). Data from our cohorts do not confirm these reports. As CMV serostatus associates with NKG2C expression, it is possible that these reported discrepancies would disappear had CMV serological status been considered. Indeed, such bias inferred by CMV was previously reported for individuals infected with HIV-1 (4).

In this study, we employed a non-parametric method to identify expanded NK cell populations. In brief, CD56dim NK cells were separated into subsets based on expression of NKG2A and NKG2C, further subdivided based upon their expression profile of KIR2DL1, KIR2DL3, and KIR3DL1, and assessed for KIR-expressing NK cell expansions. NK cell expansions were in all assessed patient groups and healthy controls primarily confined within the NKG2A−NKG2C+ or the NKG2A−NKG2C− groups of CD56dim NK cells (Figures 2A–C). Few, if any, expansions had an NKG2A+ phenotype (Figure 2A). Although NK cell expansions have predominantly been described as NKG2C+ (18), NKG2C− CD2+ NK cell expansions have also been reported (6). Therefore, we speculate that the NKG2A−NKG2C− NK cell expansions we observed may have had another activating receptor associated with their function, e.g., CD2 or activating KIRs. Taken together, the results validated our statistical strategy for identification of expansions, permitting us to compare how common expanded NK cell subsets were in CMV seropositive individuals with chronic viral hepatitis infections compared to healthy controls.

The NK cell expansions that we identified may be the reported adaptive-like NK cells, which lack the adaptor protein FcεR1γ and have been associated with reduced liver damage in HCV infection (15). Thus, the role for such cells, with increased levels of IFN-γ production in response to CD16 stimulation (10), should be thoroughly assessed in acquisition and progression of hepatitis virus infections in future studies.

Taken together, these results suggest that the NK cell differentiation status and the presence of NK cells with an adaptive phenotype, when controlled for CMV, remain unaffected by chronic viral hepatitis infection.

Copyright: © 2017 Malone, Lunemann, Hengst, Ljunggren, Manns, Sandberg, Cornberg, Wedemeyer and Björkström. This is an open-access article distributed under the terms of the Creative Commons Attribution License (CC BY). The use, distribution or reproduction in other forums is permitted, provided the original author(s) or licensor are credited and that the original publication in this journal is cited, in accordance with accepted academic practice. No use, distribution or reproduction is permitted which does not comply with these terms.