Introduction: Because of their immunomodulatory and anti-inflammatory effects, mesenchymal stem cells (MSCs) have been considered as potential therapeutic agents for treating immune-related or autoimmune diseases, such as graft-versus-host disease (GVHD). Nephrotic syndrome (NS) after allogeneic hematopoietic stem cell transplantation (allo-HSCT) is an uncommon complication with unclear etiology and pathogenesis. It may be an immune disorder involving immune complex deposition, B cells, regulatory T cells (Tregs), and Th1 cytokines and be a manifestation of chronic GVHD. Corticosteroids and calcium antagonists, alone or in combination, are the most common therapeutic agents in this setting. Rituximab is commonly administered as salvage treatment. However, treatment failure and progressive renal function deterioration has been reported to occur in approximately 20% of patients in a particular cohort.

Case presentation: We present a patient who developed NS 10 months after allo-HSCT. After treatment failure with cyclosporine A, prednisone, and rituximab, she achieved a complete response with MSC treatment. The clinical improvement of this patient was accompanied by a decreased B cell population together with an increased frequency of regulatory B cells (Bregs) and Tregs after MSC treatment.

Conclusion: MSCs could modulate NS after allo-HSCT by suppressing B cell proliferation, inducing Tregs and Bregs, and inhibiting inflammatory cytokine production by monocytes and NK cells. Among all these, Bregs might play an important role in ameliorating the NS of this patient.

Mesenchymal stem cells (MSCs) are multipotent stem cells that can be isolated from various adult tissues including umbilical cord blood, adipose tissue, muscle, and dental pulp. There has been a focus on the immunomodulatory and anti-inflammatory effects of MSCs as potential therapeutic agents for treating immune-related or autoimmune diseases, such as graft-versus-host disease (GVHD) (1). Nephrotic syndrome (NS) after allogeneic hematopoietic stem cell transplantation (allo-HSCT) with unclear etiology and pathogenesis. We and others have suggested that NS after allo-HSCT might be a manifestation of chronic GVHD (cGVHD) and occurs in isolation or accompany other manifestations of cGVHD (2–4). Corticosteroids and calcium antagonists [cyclosporine A (CsA) or tacrolimus], alone or in combination, are the most common therapeutic agents in this setting. Rituximab is commonly administered as salvage treatment. However, treatment failure and progressive renal function deterioration has been reported to occur in approximately 20% of patients in a particular cohort (4). In this case report, we present a patient with NS after allo-HSCT who was unresponsive to CsA and prednisone, poorly responsive to rituximab, achieved a complete response with MSC treatment.

A 31-year-old woman with acute monoblastic leukemia in first remission underwent HLA-identical sibling HSCT following conditioning with fludarabine and busulfan on February 24th, 2014. GVHD prophylaxis consisted of CsA and short-course methotrexate (5). Immunosuppression was tapered at +56 day posttransplantation as there was no evidence of GVHD. The patient developed lower extremity edema at 10 months posttransplantation. Laboratory analyses demonstrated a urinary protein level of 11 g/day (normal range: 0–0.14 g/day), a serum albumin level of 17.4 g/L (normal range: 40–55 g/L), and a serum cholesterol level of 10.72 mmol/L (normal range: 0–5.2 mmol/L). Immunoglobulin detection revealed low levels of IgG and normal levels of IgA and IgM. A renal biopsy specimen demonstrated glomerular basement membrane irregular thickening. Segmental spikelike projections were observed with argentaffin staining, and subepithelial granular fuchsinophilic protein was found with Masson staining under optical microscope (Figures 1A,B). An electron micrograph demonstrated a few electron-dense deposits in the subepithelial basement membrane and the fusion of most foot processes (Figure 1C). Depositions of IgG (Figure 1D) and C3+ (Figure 1E) were revealed by immunofluorescence microscopy. Additionally, PLA2R1 was negative (Figure 1F), indicating the NS was secondary. In view of the clinical presentation and histologic features, the diagnosis of membranous nephropathy was made. Based on the fact that there were no other inducements associated with acquired NS, such as history of cytomegalovirus infection, radiation, or utilization of new medicine, the NS she presented was considered a manifestation of cGVHD. No autoantibodies were found in the serum, and no other manifestations of cGVHD were observed in the patient (data not shown). 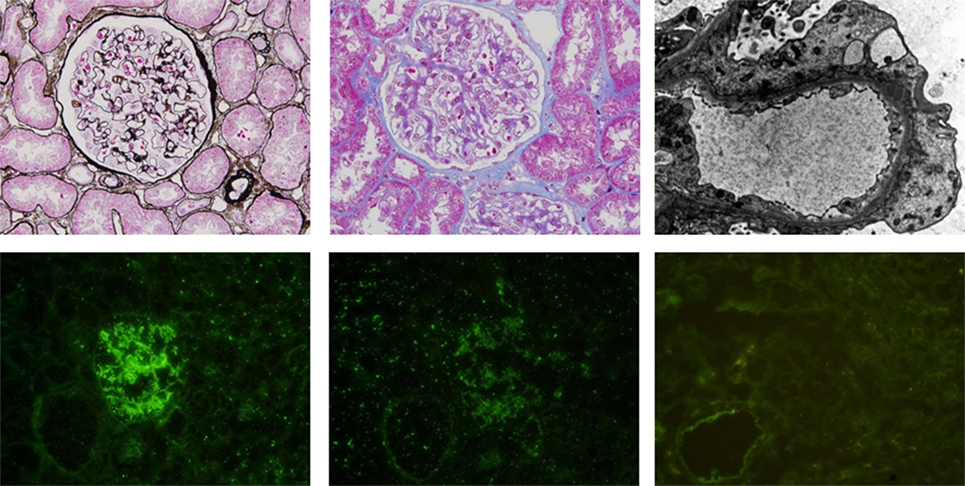 Figure 1. (A) (Above, left). Glomerular basement membrane irregular thickening and segmental spikelike projections were observed by periodic acid-silver methenamine staining. (B) (Above, middle). Granular fuchsinophilic protein was found to be subepithelial using Masson’s trichrome staining. (C) (Above, right). Electron micrograph demonstrating a few electron-dense deposits in the subepithelial basement membrane and fusions of most foot processes. Depositions of IgG (D) (below, left) and C3 (E) (below, middle) are shown by immunofluorescence microscopy. (F) (Below, right). PLA2R1 is negative.

Figure 2. (A) (Above) course of proteinuria and serum albumin during treatments. Prednisone (2 mg/kg/day) and cyclosporine A (serum values maintained at 200-300ng/ml) was administrated to the patient for 8 weeks after Nephrotic syndrome diagnosis, but the urine protein remained at a high level. Rituximab was given intravenously at a dose of 100 mg weekly on day 1 of weeks 9, 10, 11, and 12. Mesenchymal stem cells (MSCs) from the bone marrow of a third-party donor were administered from weeks 13 to 18. The dose was 1 × 106 cells/kg/infusion with a total of six doses planned in weekly intervals. (B) (Below) TNF-α and IFN-γ serum levels during treatments.

As immunomodulatory cells, MSCs can sensitively receive inflammation signals to exhibit their immune and inflammation regulation effects by indirectly secreting various cytokines or chemokines and directly interacting with peripheral immune cells, inducing the generation and proliferation of Tregs and Bregs (6). MSCs have been shown to be promising tools for the treatment of refractory cGVHD with a response rate of 73.6–86.9% (6–8). Based on NS is a manifestation of cGVHD, MSCs were administered to this patient who failed first- and second-line therapy, and she eventually obtained CR. It has been reported that MSCs may ameliorate disease in rats with minimal change NS (9) and reduce acute rejection in patients who undergo renal transplantation (10). To our knowledge, this is the first report of MSCs as a treatment for NS in clinical practice.

The pathogenesis of NS after allo-HSCT remains unclear. As a manifestation of cGVHD, NS should have the same pathogenesis as cGVHD, and to some extent it does. Our previous study has indicated that NS post-HSCT is an immune disorder involving immune complex deposition, B cell, Tregs, and Th1 cytokines such as tumor necrosis factor-α (TNF-α) and interferon-γ (IFN-γ) (3, 11). A growing body of experimental and clinical evidence suggests that, except for T cells, aberrant B cell homeostasis is associated with cGVHD (12–15), and decreased Breg frequencies are associated with cGVHD severity (16). Our study demonstrated that MSC might exert therapeutic effects in cGVHD patients by modulating plasma B cell activating factor (BAFF) levels and restoring B cell homeostasis, including the promotion of CD5+ Breg (7, 17).

For this patient, we analyzed peripheral B cell homeostasis, T cell subsets and TNF-α, and IFN-γ serum levels before and after treatments. The serum levels of TNF-α and IFN-γ showed a downward trend throughout the treatment process, (Figure 2B) and the Breg and Treg levels were on the rise after MSCs treatment (Figure S1 in Supplementary Material). Here, we compare the peripheral Breg and Treg level, TNF-α, and IFN-γ serum level at NS diagnosis, 4 weeks post-rituximab treatment, and 16 weeks post-MSC treatment. The proportion of CD19+ B cell was 19.84, 0.00, and 9.66% (data not shown), respectively, for NS diagnosis, 4 weeks post-rituximab treatment, and 16 weeks post-MSC treatment, and the frequency of CD5+IL-10+Breg within the CD19+ B cell population was 0.13, 0.00, and 1.91%, respectively, for these same time points. The proportion of CD4+CD25+FoxP3+ Treg among the CD4+CD25+ T cell population was 32.70, 12.00, and 68.46%, respectively, for the time points. The TNF-α serum level at these time points was 436.72, 386.65, and 124.90 pg/mL, respectively, and it was 6.78, 5.92, and 3.40 ng/mL, respectively, for IFN-γ. These results indicate that rituximab-depleted B cell, but there were no good therapeutic effects. The clinical improvement of this patient was accompanied by a decreased B cell population together with an increased frequency of Bregs and Tregs after MSC treatment (Figure 3). The immune modulatory function of Breg has recently gained increasing attention. It has been considered to be central to the maintenance of immune tolerance (18). The limited effectiveness of rituximab might be due to counterbalancing the beneficial effects of effector B cell depletion by concomitant depletion of Bregs, which was already decreased under basal conditions in this patient (18).

Based on what we have mentioned above, we speculated that MSCs could modulate NS after allo-HSCT by suppressing B cell proliferation, inducing Bregs and Tregs, and inhibiting inflammatory cytokine production by monocytes and NK cells (19–21). Among all these, Bregs might play an important role in ameliorating the NS of this patient (Figure 4). This finding might provide insight into the pathogenesis and treatment of NS after allo-HSCT and other immune-mediated NSs. 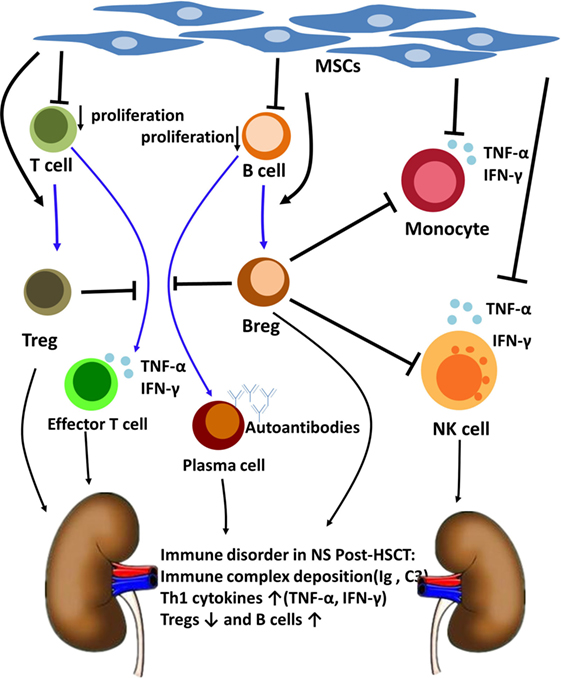 The patient has given her written, informed consent to publish the information appearing in the article.

QL, XZ, and YP have designed the paper; ZF, KZ, RL, and JS have been part of every step in this patients’ complicated diagnostic and therapeutic course and gave valuable interpretation of data. XC has done the flow cytometry analysis. All the coauthors revised paper critically and gave final approval of this version for publishing. They have ensured that all aspects of the work are accurate and have been appropriately investigated and resolved. GW, AX were their consultants (nephrologist and stem cell expert).

The Supplementary Material for this article can be found online at https://www.frontiersin.org/article/10.3389/fimmu.2017.00962/full#supplementary-material.

Copyright: © 2017 Zhang, Peng, Fan, Zhao, Chen, Lin, Sun, Wang, Xiang and Liu. This is an open-access article distributed under the terms of the Creative Commons Attribution License (CC BY). The use, distribution or reproduction in other forums is permitted, provided the original author(s) or licensor are credited and that the original publication in this journal is cited, in accordance with accepted academic practice. No use, distribution or reproduction is permitted which does not comply with these terms.