An Immunophenotyping of Ovarian Cancer With Clinical and Immunological Significance

Immune checkpoint blockade (ICB) is a new strategy of immunotherapy that has shown promising clinical benefits in the treatment of some cancer types (1, 2). Anti-CTLA-4 and anti-PD-1/PD-L1 therapy are the two main cancer treatments for ICB. In 2011, the US Food and Drug Administration (FDA) approved the first checkpoint-blocking antibody Yervoy, an anti-CTLA-4 antibody, for the treatment of patients with advanced melanoma (3). In 2014, the FDA approved the first anti-PD-1 antibody, Keytruda, for advanced melanoma (4). After that, the FDA approved application of this drug to other types of cancers, such as advanced non-small cell lung cancer and head and neck squamous cell cancer (5, 6). After these breakthroughs, new checkpoint-blocking antibodies (e.g., Opdivo, Tecentriq, Imfinzi, and Bavencio) have been approved or are undergoing clinical trials for many other cancers (e.g., breast cancer, colorectal cancer, and gastric cancer) (7–10).

Ovarian cancer is the most common cause of gynecological cancer-associated deaths in developed countries (11, 12). Clinical trials of anti-CTLA-4 antibody (NCT02571725), anti-PD-1/PD-L1 antibody (NCT02498600 NCT02674061), or a combination of these (NCT03249142) are undergoing for ovarian cancer. Therefore, it is important to evaluate and understand the response to ICB for ovarian cancer patients. According to previous study, CTLA-4, PD-L2, GZMA, and PRF1 genes were related to anti-CTLA-4 therapy, and PD-L1, CD8A, GZMA, and PRF1 genes were related to anti-PD-1/PD-L1 therapy (13–15).

In our study, we analyzed 907 ovarian cancer patients from eight Gene Expression Omnibus (GEO; https://www.ncbi.nlm.nih.gov/geo/) datasets measured by the Affymetrix Human Genome U133A Plus 2.0 Array microarray platform. We performed unsupervised consensus clustering based on the expression levels of 48 genes related to CTLA-4, PD-1/PD-L1, and cytotoxic lymphocyte (CL). We then investigated the different clinical and immunological characteristics of different immune molecular subtypes (IMMSs) of ovarian cancer. In addition, we explored the relationship between IMMS and TMIT.

The downloaded gene expression data were normalized using the robust multi-array average method (26). Batch effects between different datasets were removed by parametric empirical Bayes method (27). ConsensusClusterPlus R-package was used to conduct unsupervised consensus clustering, which can identify clusters (IMMS) in the expression data (28). The parameters were set as follows: 1,000 iterations, 80% sample resampling, a maximum of 10 clusters, hierarchical clustering with average inner and final linkage, and Pearson correlation as the similarity metric. Kaplan–Meier (K-M) survival curves were used to estimate disease-free survival and overall survival for patients in different IMMSs, and the differences in survival curves were assessed using the log-rank test. The association of clinical characteristics, genes, and disease-free survival were assessed by univariate and multivariate cox regression. Histology type, tumor stage, and grade of different IMMSs were compared using χ2 test. One-way analysis of variance was performed to test the difference in gene expression levels of IMMSs. Student–Newman–Keuls-q test was used for multiple comparisons. All statistical analyses were performed in the R platform (version 3.3.2). All statistical tests were two-sided and a P-value less than 0.05 was considered statistically significant unless specified otherwise.

In total, 907 ovarian cancer patients from 8 GEO datasets and 48 immunological genes were analyzed in our study (Tables S1 and S2 in Supplementary Material).

Clinical and Immunological Genes Related to Characteristics of Three IMMSs

Some important clinical characteristics, including age, histology type, stage, and grade, were compared across three IMMSs (Table 1). There was no significant difference in age among the IMMSs; however, differences in histology type, stage, and grade were statistically significant. The proportion of serous ovarian cancer in type I and II ovarian cancer (75.35 and 71.62%, respectively) was similar to the value of 75% reported in previous studies. The proportion of type III ovarian cancer (55.62%) was about 20% lower than 75%, whereas the proportions of other types were higher than those of types I and II to varying extents. Compared with type II and III ovarian cancer, type I cancer had more patients in stage IV and fewer patients in stage I. Regarding tumor grade, there were more patients with grade 3 and fewer patients with grade 1 and 2 in type I ovarian cancer compared with types II and III. 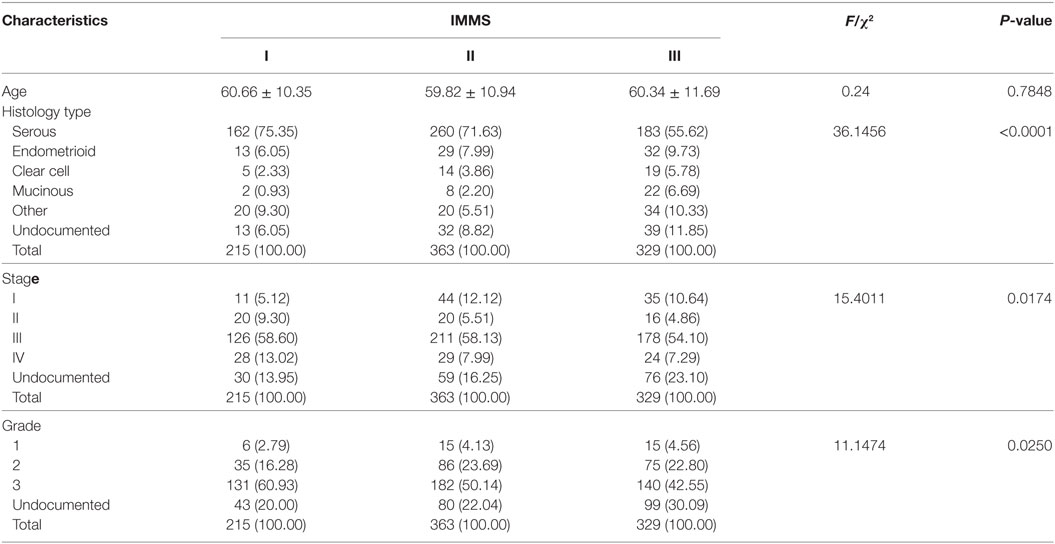 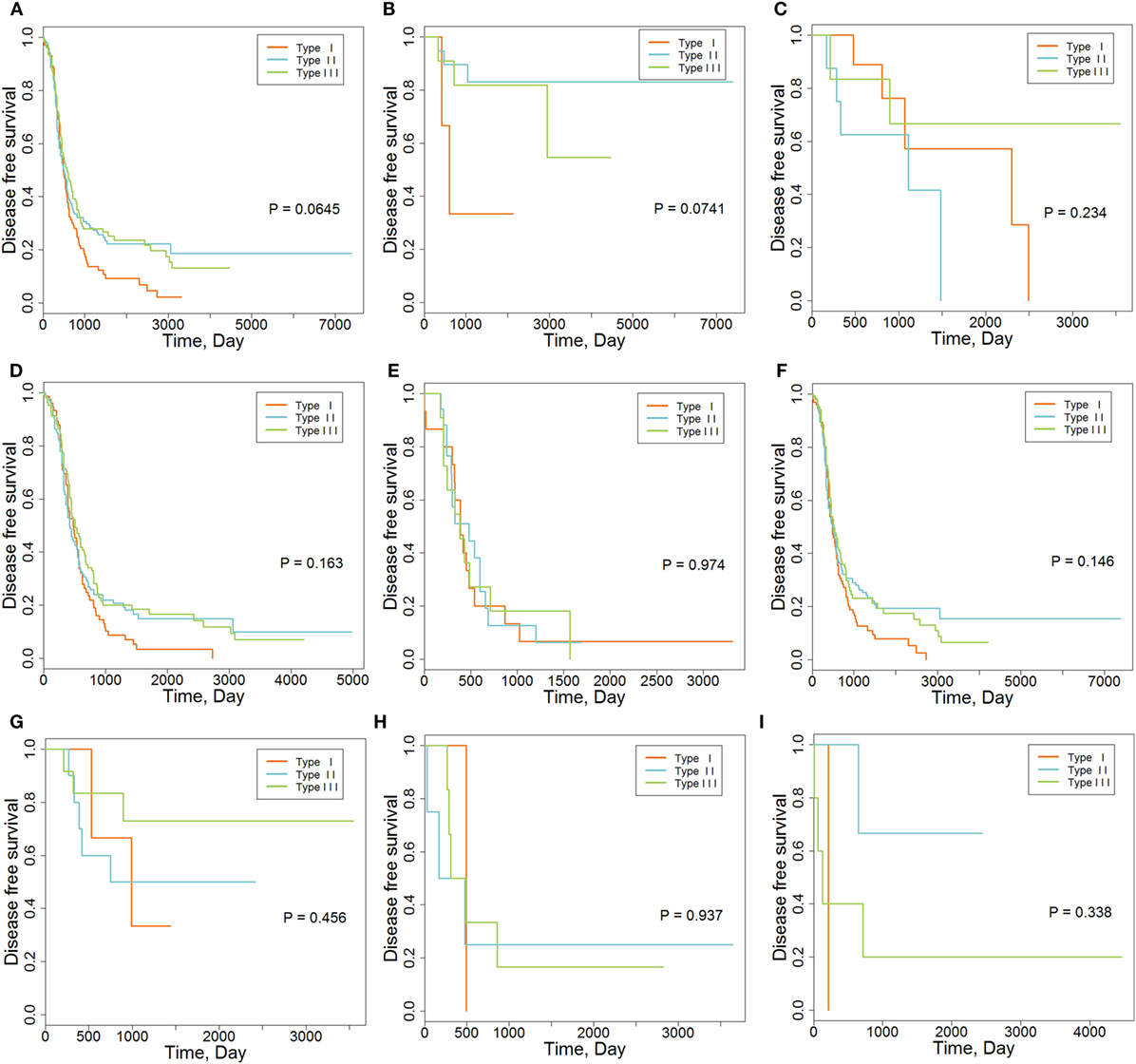 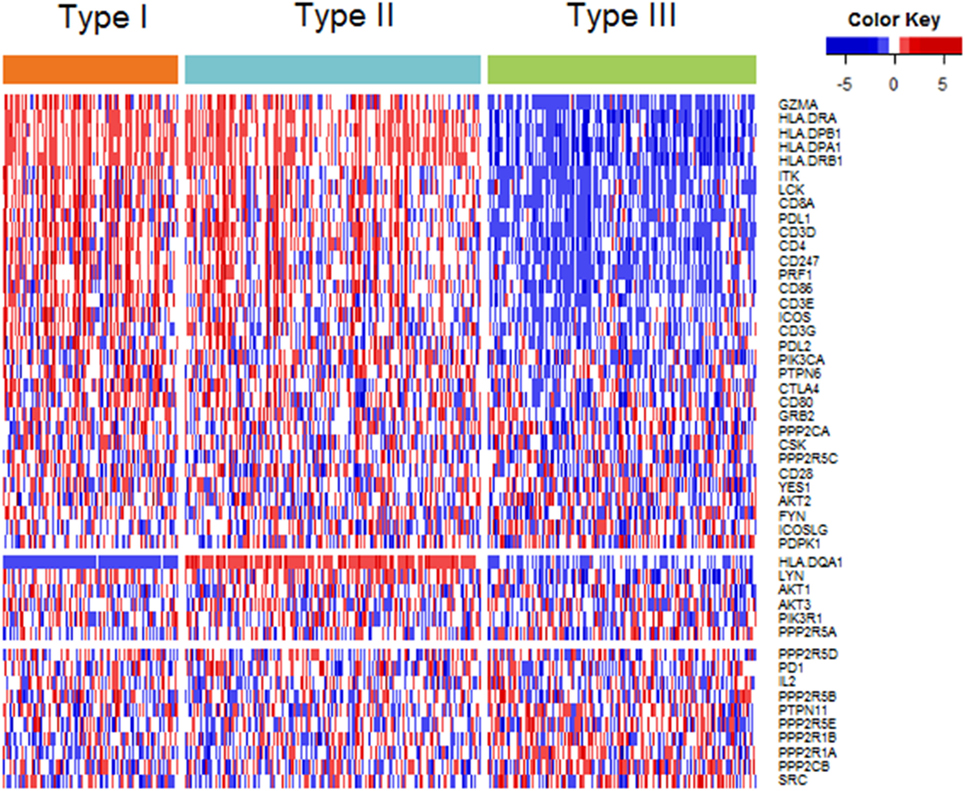 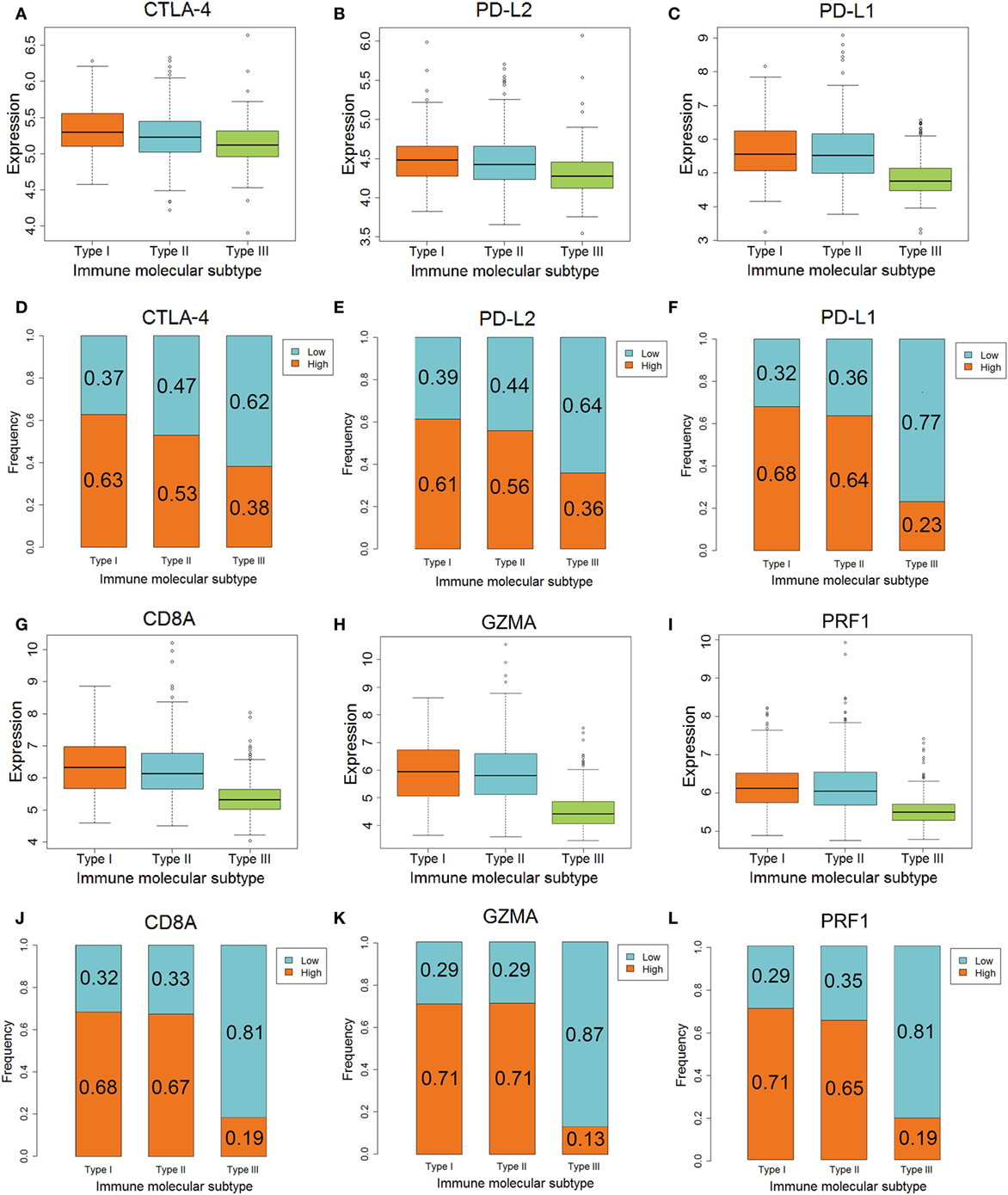 The differences in PD-L1, CD8A, GZMA, and PRF1 genes, which are related to anti-PD-1/PD-L1 therapy, in the three IMMSs were also statistically significant. The expression of each gene in type I and II ovarian cancer was higher than that in type III ovarian cancer (Figures 3C,G,H,I).

The Association Between IMMS and TMIT 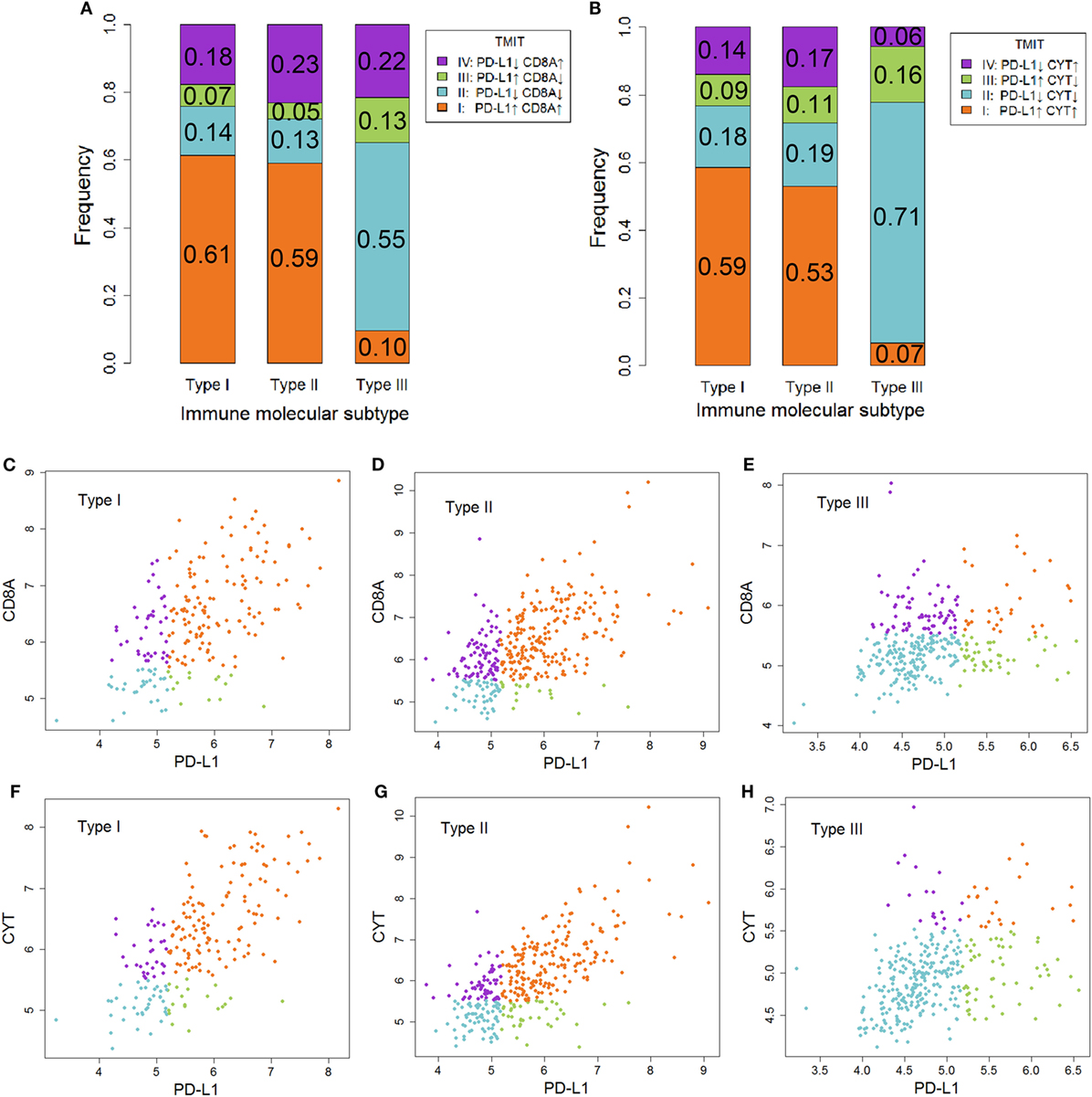 Immune checkpoint blockade was an important breakthrough for cancer immunotherapy in recent years (2). The application of ICB in ovarian cancer is currently being examined. However, like other tumors, many patients with ovarian cancer will be insensitive to ICB. Therefore, understanding the immunological characteristics of ovarian cancer is critical for ICB and identification of patients who are sensitive to ICB. In our study, we clustered ovarian cancer patients into three IMMSs with different clinical and immunological characteristics. There were more serous and low-grade tumors in type I and II ovarian cancer. Among the differentially expressed genes identified in our study, about 90% (25/28) were highly expressed in type I and II ovarian cancer. All analyses, including immune gene markers studied, cytotoxic function, and TMIT classification, suggested that type I and II categories of patients were similar to each other and distinct from type III. This result suggested that the pathogenesis of type III ovarian cancer may be dominated by other genes and pathways.

CTLA-4 is a transmembrane receptor on T cells that shares the B7 ligand (CD80/CD86) with CD28 but binds with a higher avidity (Figure 5A) (31). In contrast to the function of CD80/CD86, CTLA-4 can transmit an inhibitory signal to T cells to avoid some autoimmune diseases in normal people (32). However, the increase of the expression level of CTLA-4 in some cancer patients (type I and II ovarian cancer) will block the signaling pathway of CD28 and B7 (33). As a result, CD28 cannot promote T-cell activation to inhibit proliferation of cancer cells. Anti-CTLA-4 antibody selectively acts on CTLA-4 in these patients. B7 can bind to CD28 to promote T-cell proliferation and kill cancer cells (34). However, cancer patients with low-expression levels of CTLA-4 (type III ovarian cancer) will be not sensitive to anti-CTLA-4 therapy. There may also be other mechanisms of anti-CTLA-4 therapy. For example, some antibodies can remove tumor-induced regulatory T cells (35). Yervoy, the first anti-CTLA-4 antibody, can deplete regulatory T cells by engaging ex vivo Fc gamma receptor IIIA-expressing, non-classical monocytes in melanoma patients (36). 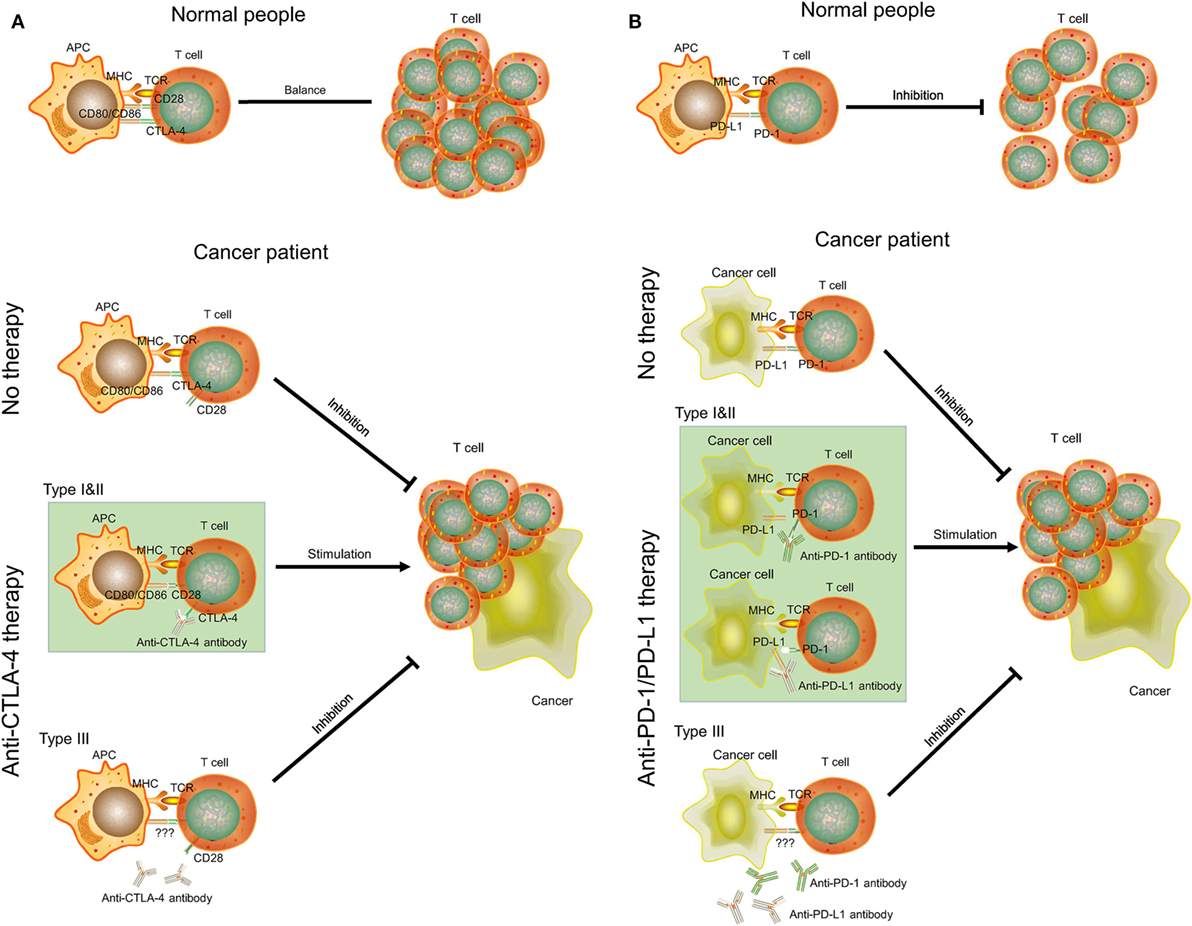 PD-1 is a member of the CD28 family on T cells. PD-L1, also known as CD274 and B7-H1, is the ligand of PD-1 and is often highly expressed on antigen-presenting cells (37). The binding of PD-1 and PD-L1 plays an important role in downregulating the immune system and promoting self-tolerance of T-cell inflammatory activity (Figure 5B). PD-L1 was upregulated in ovarian cancers, and anti-PD-L1 therapy could increase the proportion of CD4+ and CD8+ T cell (about 20%) and reduce regulatory T cell (about 5%) in mouse ovarian cancer model to promote tumor rejection (38, 39). Some studies also indicated that combination treatment can further improve antitumor microenvironment, including PD-1/PD-L1 blockade plus CTLA-4 blockade, vaccine, or irradiation (39–41). However, this effect may be positively related to expression level of PD-L1. Cancer cells with high expression of PD-L1 (type I and II ovarian cancer) may inhibit T-cell proliferation by binding PD-1 on T cells. Thus, anti-PD-L1 antibodies can bind to PD-L1 on cancer cells and T cells to promote T-cell proliferation. As for type III ovarian cancers with low-expression level of PD-L1, anti-PD-1/PD-L1 therapy may not be successful and a combination treatment would be considered.

There were several limitations in our study. The most prominent limitation is that some type I and II ovarian cancer patients may also be insensitive to anti-CTLA-4 and anti-PD-1/PD-L1 therapy. There was no gold standard for these patients who did not undergo ICB, therefore their real responses to the therapy were unknown. We used the expression of ICB-related genes and TMIT to evaluate ICB sensitivity. Our results can only identify those patients who are more likely to be sensitive to ICB.

In conclusion, we used unsupervised consensus clustering to identify three IMMSs of ovarian cancer with different clinical and immunological characteristics. Types I and II with more serous and low-grade tumors were similar to each other and had higher expression levels of genes related to ICB. These patients were likely to be more sensitive to anti-CTLA-4 therapy, anti-PD-1/PD-L1 therapy, and combination immunotherapy. However, the expression of these genes in type III ovarian cancer was low, suggesting that patients with type III disease may be insensitive to these treatments. New therapies for this group of patients should be explored. Overall, our study provides new information for the selection of patients suitable for ICB and personalized therapy of ovarian cancer.

KY and WZ wrote the manuscript. KY, GL, and ZR downloaded and analyzed the data. WZ, HX, and WW prepared all the figures and tables. KL and YH designed the entire study and edited the manuscript. All authors reviewed and approved the final manuscript.

This work was funded by National Natural Science Foundation of China under Grant number 81773551 and 81473072.

The Supplementary Material for this article can be found online at https://www.frontiersin.org/articles/10.3389/fimmu.2018.00757/full#supplementary-material.

Copyright: © 2018 Yang, Zhao, Lou, Rong, Xu, Wang, Song, Cai, Hou and Li. This is an open-access article distributed under the terms of the Creative Commons Attribution License (CC BY). The use, distribution or reproduction in other forums is permitted, provided the original author(s) and the copyright owner are credited and that the original publication in this journal is cited, in accordance with accepted academic practice. No use, distribution or reproduction is permitted which does not comply with these terms.