The Pathogenicity of BPI-ANCA in a Patient With Systemic Vasculitis

Objective: ANCA associated vasculitis (AAV) is characterized by systemic necrotizing vasculitis with the presence of ANCA. Although BPI-ANCA is one of the atypical ANCAs and is occasionally seen in patients with vasculitis, the pathogenicity of BPI-ANCA remains unclear. This study was performed to examine the pathogenic role of BPI-ANCA against neutrophils.

Results: BPI-AAV IgGs-treated neutrophils showed NET formation with histone citrullination. Interestingly, the monoclonal BPI-ANCA did not induce NET, but the immune complexes (ICs) of recombinant BPI and BPI-ANCA induced TNFα-dependent NET formation with hypercitrullination. Furthermore, TNFα increased the expression of BPIs in neutrophils and the BPIs were translocated to cell surface.

Conclusion: BPI-ANCA could affect neutrophils leading to NET formation and may play a role in the development of systemic vasculitis as pathogenic autoantibody.

2) BPI-ANCA-induced NET may play role in the pathogenesis of vasculitis.

3) Gram-negative infections might be involved in the development of BPI-ANCA.

Bactericidal/permeability-increasing protein (BPI) is an antibacterial neutrophil cytoplasmic protein that plays an important role in the immune system. BPI has anti-endotoxin properties, which allow it to work against Gram-negative bacteria (GNB) infection. In addition, BPI delivers components of GNB to dendritic cells for processing. Anti-neutrophil cytoplasmic autoantibodies (ANCAs) against neutrophil granule BPI (BPI-ANCA) have been reported in various kinds of diseases, such as cystic fibrosis and inflammatory bowel diseases (IBD), in which opportunistic infections with GNB are common. During persistent GNB infections, complexes of BPI and GNB are processed and presented by dendritic cells, potentially leading to the breakdown of immunological tolerance against BPI (1). Although BPI-ANCAs are known to be involved in the pathogenesis of systemic vasculitis (2), it remains unclear whether they play a pathogenic role in the development of vasculitis. Here, we report that BPI-ANCAs in a patient with systemic vasculitis affect neutrophils to undergo neutrophil extracellular trap (NET) with hypercitrullination, thus contributing to the development of systemic vasculitis.

A 76-year-old Japanese man who had experienced recurrent chronic bronchiolitis with Pseudomonas aeruginosa infection for over 10 years presented with a 6-month history of haematuria/proteinuria and purpura. A skin biopsy revealed cutaneous leukocytoclastic vasculitis, and a renal biopsy showed pauci-immune crescentic glomerulonephritis. Serum examination by immunofluorescence showed the patient was negative for P-ANCA, but positive for C-ANCA. Routine enzyme-linked immunosorbent assay (ELISA) revealed that he was negative for both MPO-ANCA and PR3-ANCA. The titer of serum immune complexes (C1q binding assay) was 50.0 μg/mL (normal range; < 3.0 μg/mL). Further ELISA assay (ANCA panel kit, Euro Diagnostica) revealed that the antigen for C-ANCA was BPI (titer; 6.5 O.D. ratio, Table 1) and other atypical ANCAs including azurocidin, cathepsin G, elastase, lactoferrin, and lysozyme were negative. Based on these findings, the patient was diagnosed with BPI-ANCA-associated systemic vasculitis (AAV). He was treated with prednisolone with antibiotics for GNB infections and his clinical findings were recovered (Figure 1). 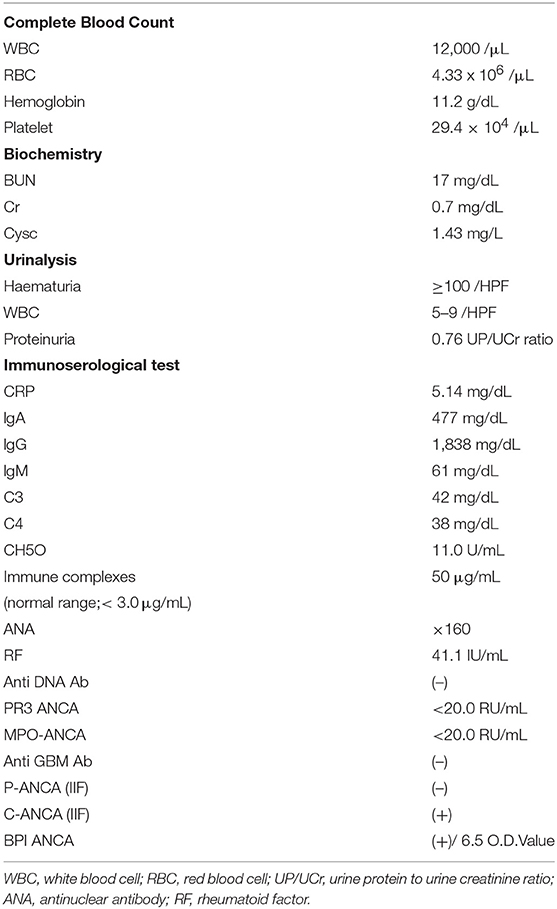 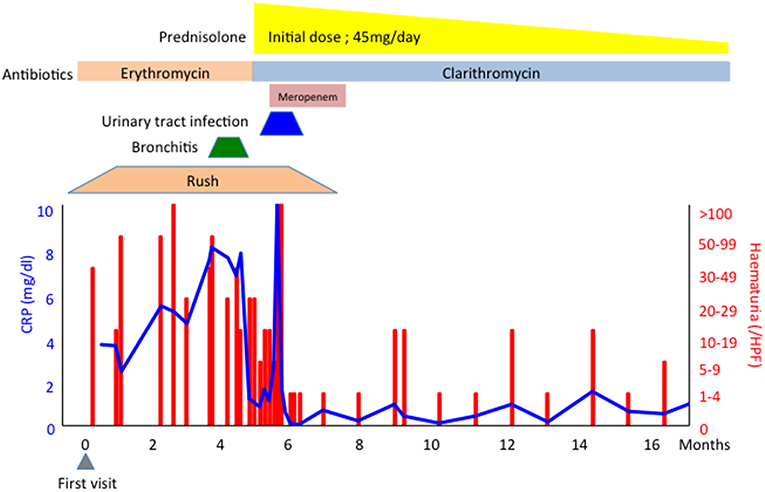 Figure 1. Clinical course of a patient.

The Pathogenicity of BPI-ANCA in in vitro Experiments

To evaluate the significance of BPI-ANCAs in vasculitis, healthy donor neutrophils were treated in vitro with BPI-ANCA immunoglobulin (Ig)Gs derived from the patient. BPI-AAV IgGs-treated neutrophils underwent Sytox Green-positive NET formation with histone citrullination under TNFα stimulation in a manner similar to that of MPO-AAV IgGs-treated neutrophils (Figures 2A,B). Since the polyclonal ANCA-IgGs were extracted from patient sera using Protein G column, to elucidate the pathogenicity of BPI-ANCA, a TNFα-primed neutrophils were treated with monoclonal BPI-ANCA and control antibody in the presence of recombinant BPI. Although the monoclonal BPI-ANCA did not induce NET formation, the immune complexes (ICs) of recombinant BPI and BPI-ANCA induced TNFα-dependent NET formation with hypercitrullination (Figure 2C). To elucidate the phenomenon that TNFα accelerated the ICs-induced NET formation, the expression of BPI in neutrophils with or without TNFα stimulation was evaluated by immunostaining. TNFα up-regulated BPI expression in neutrophils and the overexpressed BPIs were translocated to cell surface (Figure 2D). 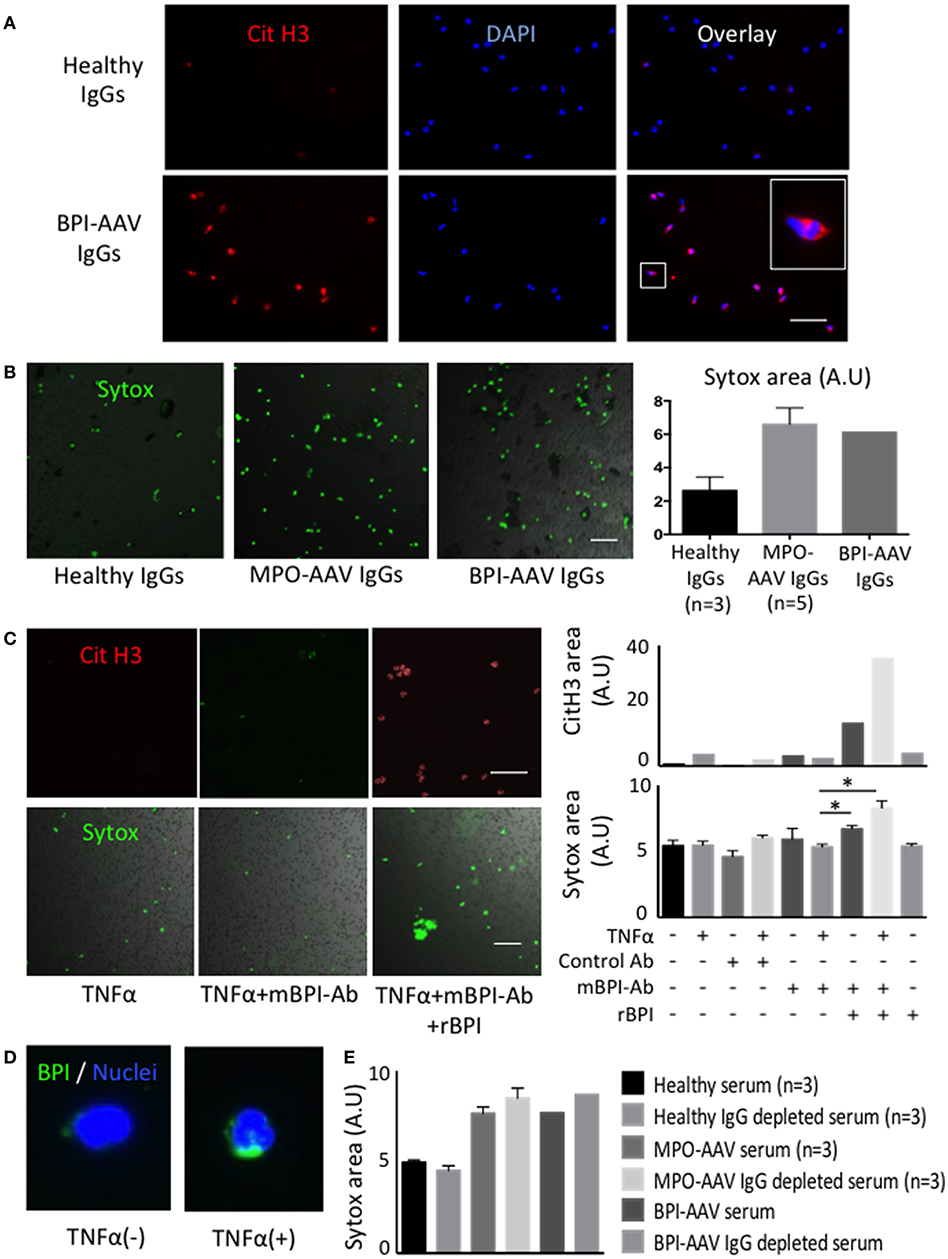 We demonstrated that BPI-ANCAs in a patient with systemic vasculitis activated neutrophils to undergo NET formation in vitro studies, suggesting that BPI-ANCAs contribute to the pathogenicity during the development of vasculitis.

BPI-ANCAs have been frequently detected in various kinds of disease, including cystic fibrosis and inflammatory bowel diseases, and these auto-antibodies were found to be involved in organ damage and excessive inflammation (1). Meanwhile, Zhao et al. reported that BPI-ANCAs were detected in 40% of patients with double-negative ANCA (negative for MPO- and PR3-ANCA) vasculitis (2). Although MPO- and PR3-ANCAs are known as pathogenic antibodies that can activate neutrophils (3, 4), the role of BPI-ANCAs remains unclear.

Here, we found that BPI-ANCA IgGs activated neutrophils under TNFα stimulation, leading to NET formation with hypercitrullination. Furthermore, monoclonal BPI-ANCA induced NETs with hyper-citrullination via forming ICs of BPI and BPI-ANCAs in accordance with TNFα stimulation. The C1q binding ICs were detected by ELISA method in this patient (Table 1), implying that the patient-eluded BPI-ANCAs may form ICs with BPI in the absence of additional exogenous BPIs and IgGs themselves could have NET inducibility. In addition, BPIs on neutrophils were translocated to cell surface and overexpressed by TNFα stimulation. These phenomena indicate that BPI-ANCAs may be produced during chronic inflammatory diseases, such as cystic fibrosis and IBD, and consequently (1) BPI-ANCAs bind to circulating excessive BPIs that are exposed by infections, inducing the formation of ICs, (2) the circulating ICs may bind to neutrophils with overexpressed BPI, (3) TNFα facilitated ICs mediated signaling such as spleen tyrosine kinase (5), leading to NET formation, and (4) these contribute to the development of systemic vasculitis.

Although most patients with cystic fibrosis have BPI-ANCAs, it remains controversial why only a few patients of BPI-ANCAs positive develop systemic vasculitis. There are several possible explanations, including the amount of exposed BPI during infection, the presence of refractory infection, and the characteristics of BPI-ANCAs (e.g., affinity to antigen and IgG subclasses). While, BPI-ANCAs IgG derived from patients in this study.

This study showed that BPI-ANCAs could influence NET formation and may play a role in the development of systemic vasculitis as pathogenic autoantibodies.

Blood samples were obtained from the patient with BPI-AAV, MPO-AAV and healthy control. This study was approved by the Institutional Review Board of Hokkaido University Hospital. We obtained written informed consent for the publication from the patient.

Neutrophils were extracted from a peripheral blood sample of a healthy volunteer using Polymorph Prep. After 30 min of 5 ng/mL tumor necrosis factor (TNF)α pretreatment at 37°C, the neutrophils were treated with 3% serum, or 3% IgG depleted serum, or 400 μg/mL IgGs eluted from serum of patients with BPI- AAV, MPO-AAV, healthy control. In experiment using monoclonal antibody, mouse BPI monoclonal antibody (10 μg/mL) and recombinant BPI (Santa Cruz) were used. The neutrophils were seeded on chamber slides or 96-well plate and incubated for 3 h at 37°C in vitro.

IgGs were eluted from serum using an immunoadsorbent column (Protein G HP SpinTrap; GE Healthcare, Tokyo, Japan) according to the manufacturer protocol. Contamination of endotoxin in samples was ruled out using the Limulus test kit (Wako Pure Chemical, Osaka, Japan). NETs were evaluated by immunofluorescent staining and by live imaging.

All procedures performed in the study were in accordance with the Declaration of Helsinki. Written informed consent was obtained from the patient presented here.

ST and DN wrote and summarized the manuscript. KW-K and DN conducted in vitro neutrophil experiments. ST, KW-K, YK, SN, and TA managed and followed up the patients' care. All authors reviewed the manuscript and approved the final version.

We thank the patients who participated in this study. We thank Katie Oakley, Ph.D, from Edanz Group (English language editing service, www.edanzediting.com/ac) for editing a draft of this manuscript.

Copyright © 2019 Takeda, Watanabe-Kusunoki, Nakazawa, Kusunoki, Nishio and Atsumi. This is an open-access article distributed under the terms of the Creative Commons Attribution License (CC BY). The use, distribution or reproduction in other forums is permitted, provided the original author(s) and the copyright owner(s) are credited and that the original publication in this journal is cited, in accordance with accepted academic practice. No use, distribution or reproduction is permitted which does not comply with these terms.