Objective: To investigate whether low-density granulocytes (LDGs) are an immunophenotypic feature of patients with multiple sclerosis (MS) or neuromyelitis optica spectrum disorder (NMOSD).

Methods: Blood samples were collected from 20 patients with NMOSD and 17 patients with MS, as well as from 15 patients with Systemic Lupus Erythematosus (SLE) and 23 Healthy Donors (HD). We isolated peripheral blood mononuclear cells (PBMCs) with density gradient separation and stained the cells with antibodies against CD14, CD15, CD16, and CD45, and analyzed the cells by flow cytometry or imaging flow cytometry. We defined LDGs as CD14−CD15high and calculated their share in total PBMC leukocytes (CD45+) as well as the share of CD16hi LDGs. Clinical data on disease course, medication, and antibody status were obtained.

Results: LDGs were significantly more common in MS and NMOSD than in HDs, comparable to SLE samples (median values HD 0.2%, MS 0.9%, NMOSD 2.1%, SLE 4.3%). 0/23 of the HDs, but 17/20 NMOSD and 11/17 MS samples as well as 13/15 SLE samples had at least 0.7 % LDGs. NMOSD patients without continuous immunosuppressive treatment had significantly more LDGs compared to their treated counterparts. LDG nuclear morphology ranged from segmented to rounded, suggesting a heterogeneity within the group.

Conclusion: LDGs are a feature of the immunophenotype in some patients with MS and NMOSD.

Low-Density Granulocytes (LDGs) are neutrophilic granulocytes that remain in the fraction of peripheral blood mononuclear cells (PBMC) after density gradient separation. When first described, they were noted to be a feature of rheumatologic diseases such as Systemic Lupus Erythematosus (SLE) (1), while more recent works described LDGs in various conditions such as asthma (2), tuberculosis (3), and psoriasis (4). LDGs have been implicated in the pathogenesis of SLE by producing type I interferons and undergoing spontaneous NETosis (generation of Neutrophil extracellular traps), thus providing potentially immunogenic nuclear matter (5, 6). Their role in the pathogenesis of other diseases is less clear.

The origin of the LDGs has not yet been elucidated and it has been proposed that they represent immature or degranulated neutrophils. Interestingly, LDGs in SLE display an immature nuclear structure even though they express the surface markers of mature granulocytes, such as CD16 (5, 6).

Neuromyelitis Optica Spectrum Disorder (NMOSD) and Multiple Sclerosis (MS) are neuroinflammatory conditions of unknown etiology. The evidence for the involvement of granulocytes in the pathogenesis of MS has been scarce so far, while some early studies indicate a role of neutrophils in NMOSD pathogenesis (7, 8).

In this study, we provide the first evidence for the existence of LDGs in MS and NMOSD and thus add another puzzle piece to the role of the innate immune system in the pathogenesis of these diseases.

All MS and NMOSD patients were a stable phase of disease with a minimum of 3 months since the last relapse and last glucocorticoid pulse. We excluded patients if they had additional autoimmune, infectious or malignant conditions. We correlated the LDG percentage with clinical information such as Expanded Disability Status Scale (EDSS) score, number of relapses, treatment, and duration of disease as well as titers for anti-MOG (myelin oligodendrocyte glycoprotein) and anti-AQP-4 (aquaporin-4) antibodies.

We excluded sub-cell-sized detritus and doublets based on scatter characteristics and gated on CD45+ leukocytes. Of these, we defined LDGs as CD14−CD15high and calculated the ratio of LDGs of all CD45+ PBMCs (Figure 1A). We then determined the fraction of CD16high LDGs. FACS Data Analysis was performed using FlowJo Version 10.4.1 (FlowJo LLC). We analyzed the ImageStream data with IDEAS Version 6.2 (Amnis). 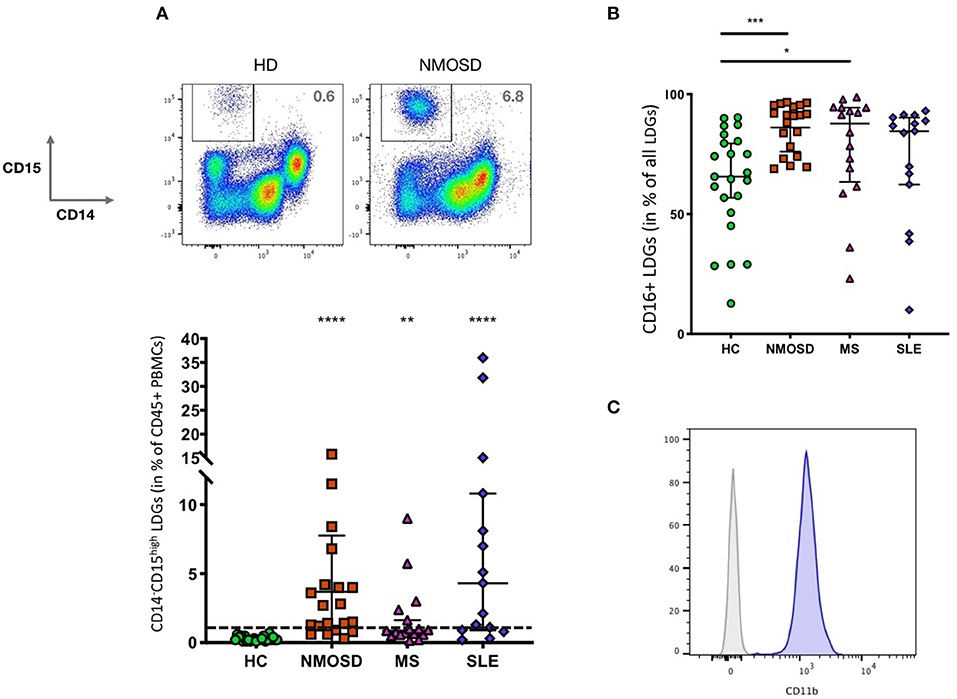 The percentage of LDGs of different disease states and the percentage of CD16high LDGs were compared to HDs using the Kruskal-Wallis test with Dunn's Correction for multiple testing. For the difference between two groups, we used the Mann-Whitney test. All statistical analysis was performed in GraphPad Prism Version 7.0e for Mac OS X (GraphPad Software).

LDGs are a feature of many inflammatory conditions and of unknown pathogenic significance. To elucidate whether LDGs also exist in NMOSD and MS, we performed FACS analyses of 76 peripheral blood samples.

We conducted the analysis of 17 MS patients as well as 20 patients with NMOSD, of which 8 were anti-AQP4 positive and 4 positive for anti-MOG antibodies. Fifteen patients with SLE and 23 HDs served as controls. Median EDSS scores were 4.0 in the MS and 3.0 in the NMOSD group. The most common treatments in the MS group were dimethylfumarate (6/17) and beta Interferon (4/17). The median number of relapses in the relapse-remitting MS (RRMS) patients was 2.5. NMOSD Patients were most often treated with Rituximab (8/20), Mycophenolate (4/20), and azathioprine (4/20) (Table 1). 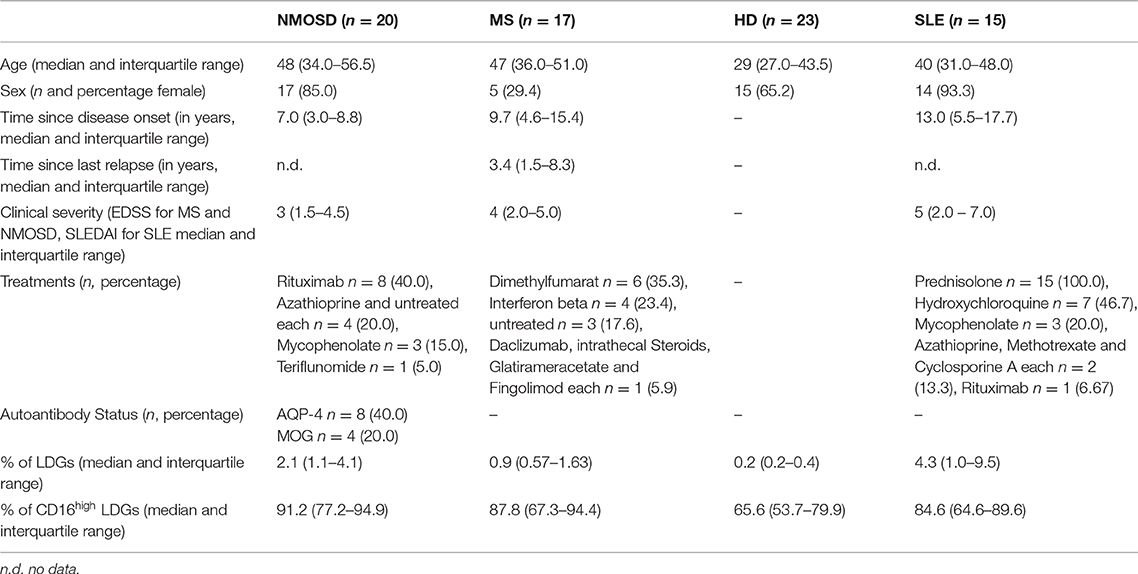 In comparison to healthy controls, both MS and NMO patients feature a significantly higher percentage of LDGs. SLE samples displayed the highest frequencies of LDGs (MS: 0.9%, NMO 2.1%, SLE: 4.3%, HD: 0.2%, median fraction of CD45+ cells) (Figure 1A). None of the HDs, but 17/20 NMOSD and 11/17 MS samples as well as 13/15 SLE samples had at least 0.7 % LDGs. The fraction of CD16high LDGs differed both between and within groups (Figure 1B), but was significantly higher in NMOSD and MS compared to HCs. LDGs uniformly expressed CD11b (Figure 1C).

We analyzed the nuclear morphology of the LDGs of patients with NMOSD, MS, and SLE. While some of the CD14−, CD15high cells displayed the segmented nuclear shape typical of mature granulocytes, others showed band-formed or rounded nuclei, which are traditionally thought to be immature forms (Figure 2). 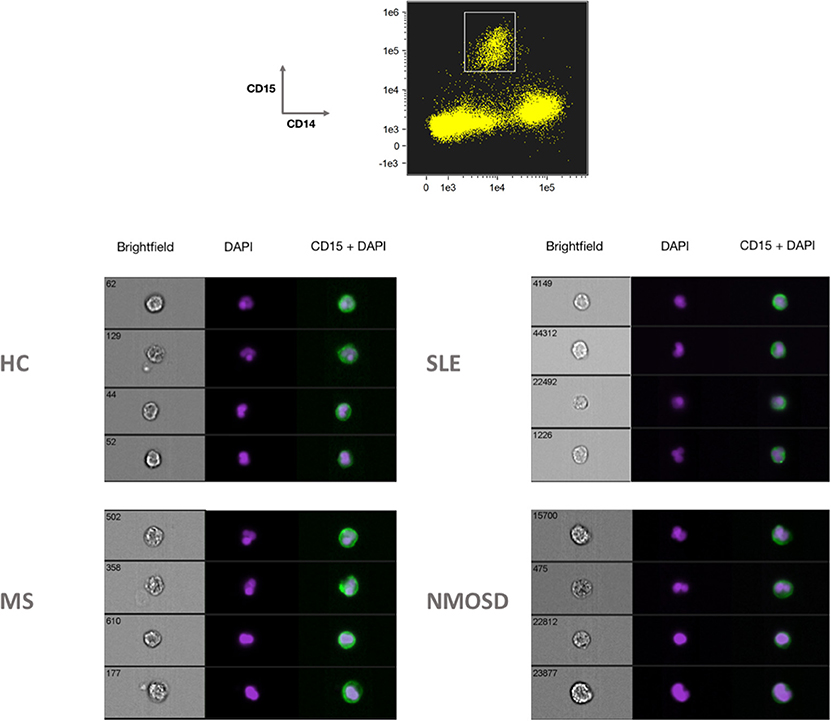 Figure 2. Imaging flow cytometry analysis of LDGs from a healthy donor and patients with SLE, MS, and NMOSD revealed LDGs with heterogenous nuclear shapes, ranging from round to multisegmented.

We looked for associations between the fraction of LDGs in MS and NMOSD patients and their clinical characteristics such as time since first manifestation of disease, number of relapses, severity of disability as judged by the EDSS score, type of treatment and antibody status, but did not find any significant correlations (data not shown). NMOSD patients who did not receive a continuous immunosuppressive treatment had significantly higher LDG percentages compared to their peers receiving treatment (median LDGs treated 1.4%, untreated 7.9%, p < 0.01). The percentage of the LDG fraction did not correlate with clinical severity, number of relapses or antibody status.

This study demonstrates the presence of Low-Density Granulocytes in MS and NMOSD.

In contrast to MS, in NMOSD classical granulocytes are thought to play a pivotal role as they can be found in tissue biopsies (7) and alterations in neutrophil function have been described (8). We recently described CD11b+ leucocytes in the PBMCs of MS patients that were characterized by increased activation of NAD(P)H oxidase (NOX) (13). In these, NOX activation correlated with clinical activity. While we assumed these cells to be monocytes at the time, the presence of LDGs in the peripheral blood mononuclear cell (PBMC) fraction could pose an alternative explanation for our previous results.

We found the LDG fraction of NMOSD and MS patients to contain significantly more CD16high cells, a marker indicating neutrophil maturity. As previously described for LDGs in SLE, LDG nuclei in NMOSD vary between mature segmented and immature round forms. In previous studies, the immature nuclear morphology was associated with an expression of surface markers characteristic of mature cells, suggesting that LDGs do not fit into the traditional maturity spectrum of granulocytes (6).

This work adds MS and NMOSD to the diverse list of inflammatory conditions featuring LDGs. In our opinion, this makes it more likely that LDGs are an epiphenomenon of ongoing inflammation rather than a causal part of the pathogenesis of a specific disease, but further research is needed to establish the role of these cells in different conditions. Interestingly, NMOSD patients often have additional immune-mediated disorders, especially SLE (14). The fact that these disorders both show high fractions of LDGs could also point toward shared pathogenetic mechanisms. A recent study reported a strong correlation of LDGs and glucocorticoid use in large transcriptional data sets of SLE patients (15). This is in contrast to our results, as none of the MS and NMOSD patients received systemic glucocorticoid treatment in the last 3 months.

To establish the potential of LDGs as a biomarker in neuroinflammatory diseases or inflammation in general, analysis of larger and longitudinal cohorts should be performed to uncover potential correlations with disease severity or prognosis.

The datasets generated for this study can be obtained from the corresponding author upon reasonable request.

The studies involving human participants were reviewed and approved by Ethikkommission, Charité – Universitätsmedizin Berlin. The patients/participants provided their written informed consent to participate in this study.

We thank Peggy Mex (DRFZ) for technical assistance. We are indebted to our patients and healthy controls for their blood donations. We acknowledge support from the German Research Foundation (DFG) and the Open access Publication Fund of Charité - Universitätsmedizin Berlin. A preprint of this manuscript is available at bioRxiv (16).

Copyright © 2019 Ostendorf, Mothes, van Koppen, Lindquist, Bellmann-Strobl, Asseyer, Ruprecht, Alexander, Niesner, Hauser, Paul and Radbruch. This is an open-access article distributed under the terms of the Creative Commons Attribution License (CC BY). The use, distribution or reproduction in other forums is permitted, provided the original author(s) and the copyright owner(s) are credited and that the original publication in this journal is cited, in accordance with accepted academic practice. No use, distribution or reproduction is permitted which does not comply with these terms.