NK-cell resistance to transduction is a major technical hurdle for developing NK-cell immunotherapy. By using Baboon envelope pseudotyped lentiviral vectors (BaEV-LVs) encoding eGFP, we obtained a transduction rate of 23.0 ± 6.6% (mean ± SD) in freshly-isolated human NK-cells (FI-NK) and 83.4 ± 10.1% (mean ± SD) in NK-cells obtained from the NK-cell Activation and Expansion System (NKAES), with a sustained transgene expression for at least 21 days. BaEV-LVs outperformed Vesicular Stomatitis Virus type-G (VSV-G)-, RD114- and Measles Virus (MV)- pseudotyped LVs (p < 0.0001). mRNA expression of both BaEV receptors, ASCT1 and ASCT2, was detected in FI-NK and NKAES, with higher expression in NKAES. Transduction with BaEV-LVs encoding for CAR-CD22 resulted in robust CAR-expression on 38.3 ± 23.8% (mean ± SD) of NKAES cells, leading to specific killing of NK-resistant pre-B-ALL-RS4;11 cell line. Using a larger vector encoding a dual CD19/CD22-CAR, we were able to transduce and re-expand dual-CAR-expressing NKAES, even with lower viral titer. These dual-CAR-NK efficiently killed both CD19KO- and CD22KO-RS4;11 cells. Our results suggest that BaEV-LVs may efficiently enable NK-cell biological studies and translation of NK-cell-based immunotherapy to the clinic.

The relative resistance of NK cells to transduction hampers the study of NK-cell biology and the development of NK cell-based immunotherapy. VSV-G-LVs, classically used to generate chimeric antigen receptor (CAR)-T cells (1), do not efficiently transduce NK-cells. RD114-pseudotype viral vectors represent an attractive alternative since their entry receptor, the sodium-dependent neutral amino acid transporter (ASCT2) (2, 3), is widely expressed in the hematopoietic lineage (4). However, despite encouraging initial report, RD114-based viral vectors only transduce NK-cells at low levels. Nevertheless, they recently enabled clinical development of cord-blood derived CAR-NK-cells (5). To fill the need for an efficient method for transducing NK cells, we investigated alternative pseudotyping proteins. Since the Baboon envelope pseudotyped lentiviral vector (BaEV-LV) binds ASCT1 (6) in addition to ASCT2 for viral entry, we assessed their efficacy to transduce NK-cells for therapeutic purposes. As observed independently by Bari et al. (7) our data demonstrate the efficacy of BaEV-LV in NK-cell transduction.

An UCOE sequence (10) was added to the lentiviral vector pHRSIN-SFFV-eGFP (11) upstream of the SFFV promoter to produce pHUS-GFP vector. For the CAR-expression vector, GFP in pHUS-GFP was replaced by an anti-CD22 CAR (m971 ScFv) fused to 28BBz constructed from 28z and BBz (Dr. Orentas, National Cancer Institute) (12). For the dual CAR-expression vector, the GFP-cassette was replaced by 2nd-generation anti-CD19 and anti-CD22 CARs, separated by a self-cleaving T2A peptide (Figure 3A). The pMD2.G (VSV-G) was a gift from Didier Trono (Addgene plasmid#12259; http://n2t.net/addgene:12259; RRID:Addgene_12259) and pLTR-RD114A (13) (RD114) was a gift from Jakob Reiser (Addgene plasmid#17576; http://n2t.net/addgene:17576; RRID:Addgene_17576). The Measles virus (MV-LV) and BaEVRLess envelope plasmids were used as previously described (6). Titration was performed on HEK293T cells (ATCC) using serial virus dilutions (6).

NKAES were transduced after 1 week of expansion. One day before transduction, a 12-well plate was coated with RetroNectin (Takara). The following day, concentrated vectors at indicated multiplicity of infection (MOI), were added to coated plates for 4 h at 37°C. Then NK cells were seeded in these wells in IL-2-supplemented medium and protamine sulfate (Pharmaceutical Partners of Canada Inc.) (8 ug/mL). The plates were then centrifuged at 1,000 g for 1 h and incubated at 37°C overnight. The next day, IL-2-supplemented medium was added to each well. Transduction was assessed on day 3 or day 5 after transduction for NKAES and freshly isolated NK-cells (FI-NK), respectively.

Cytotoxicity was assessed 24 h after cell contact by flow cytometry. Targets cells were loaded with PKH26 dye (Sigma-Aldrich) according to the manufacturer's directives and seeded in 96 well round bottom plates. Effector cells were then added at different effector:target ratios and medium alone was added to control wells. Before acquisition, 7AAD was added to each well to discriminate dead cells. The cytotoxicity was calculated as: Cytotoxicity (%) = [1-live targets (sample)/live targets (control)] × 100%.

Blood samples were obtained from healthy volunteers after informed and written consent. The study was approved by the institutional ethical board of the CHU Sainte-Justine (approved protocol #CER-3527). 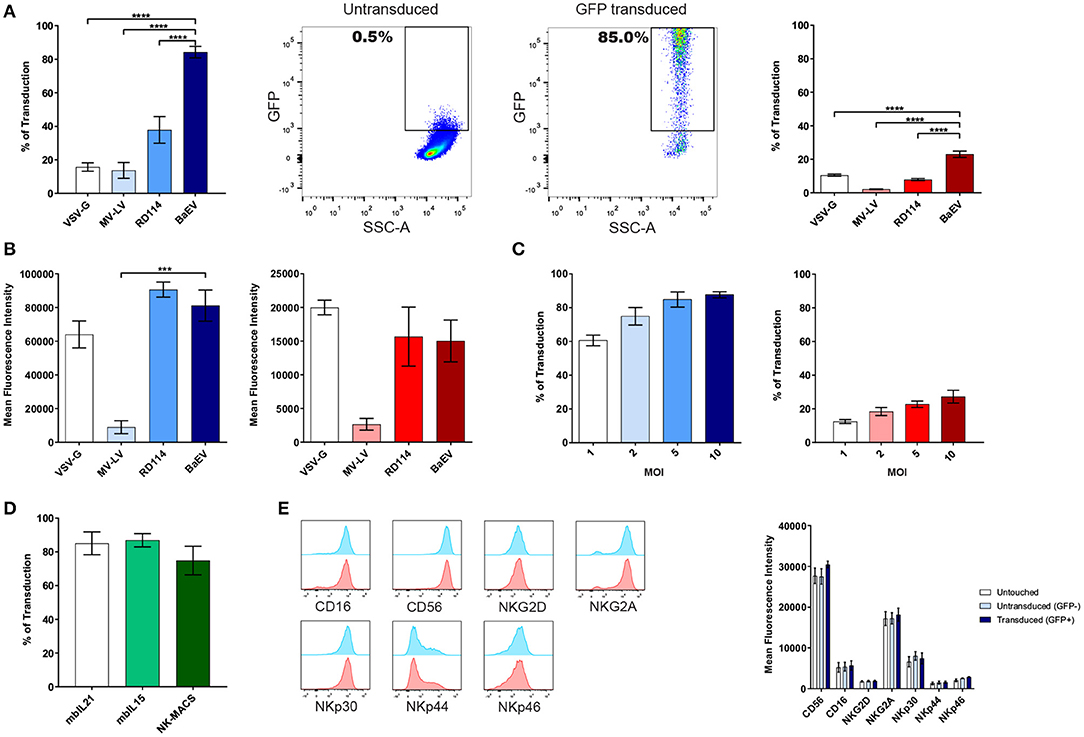 NK-cell receptors expression was assessed on untouched and BaEV-LV treated NKAES, which were either transduced (GFP+) or non-transduced (GFP-) (Figure 1E). There was no difference in CD56, CD16, NKG2D, NKG2A, NKp30, NKp44, and NKp46 receptors expression, suggesting that those markers are neither linked to the transduction efficiency, nor affected by the transduction (Figure 1E), unlike what has been recently reported (7). This difference could be attributed to the different expansion system used in our study.

The number of recovered living cells in both NKAES and FI-NK was preserved after transduction with BaEV-LVs (Figure 2A) although MV-LV transduction on NKAES yielded more living recovered cells than BaEV-LV transduction (p < 0.05). Although the percentage of dead cells in culture was low for all conditions (Figure 2B), it was higher in NKAES transduced with MV-LV and RD114-LV as compared to BaEV (p < 0.01 and p < 0.05, respectively). Together these results suggest that BaEV-LV transduction did not affect viability nor NK-cell proliferation. 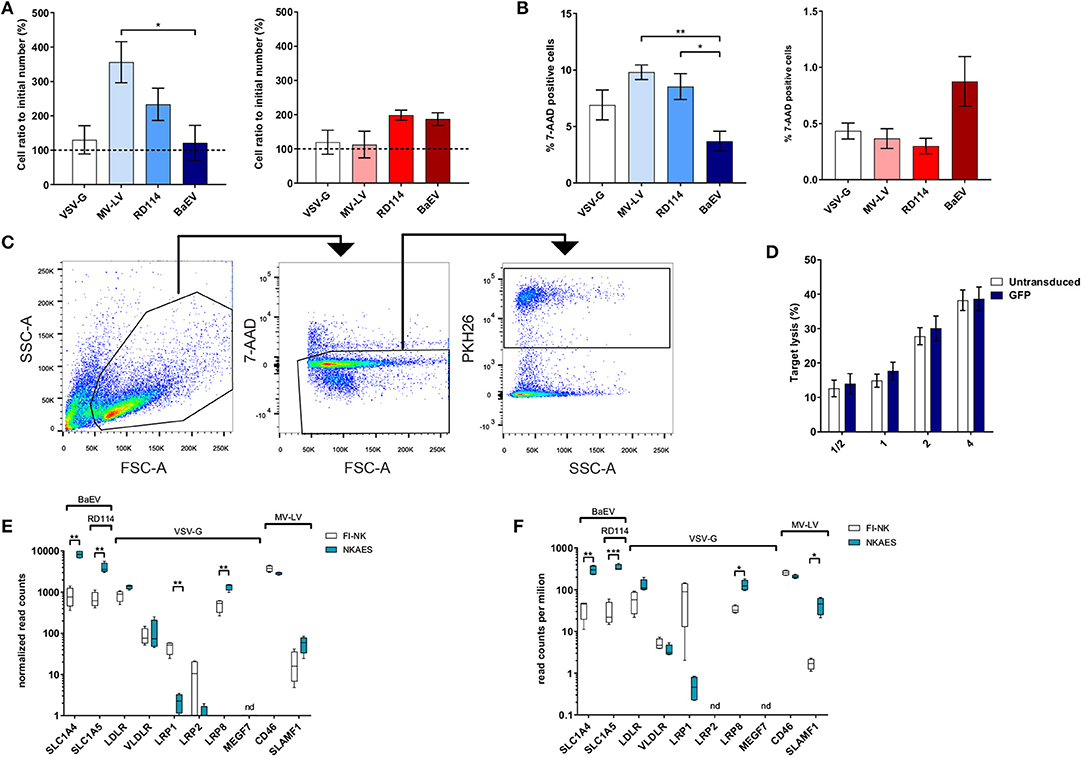 We then assessed whether NK-cell cytotoxic function was preserved after BaEV-LV transduction and confirmed that the cytotoxicity of eGFP-transduced NKAES cells against K562 cells was equivalent to non-transduced NKAES (Figures 2C,D).

RNAseq analyses of both FI-NK and NKAES showed that ASCT1 and ASCT2 mRNAs were detected at significantly higher frequency in both IL-15- and IL-21-NKAES than in FI-NK (Figures 2E,F), which may explain the higher transduction rate of NKAES. These data were confirmed by qPCR (not shown). Also, the expression of both BaEV receptors by NK cells may explain the higher transduction efficacy of BaEV-LVs as compared to RD114 which use only one of those receptors.

CAR-expressing NK-cells represent one of the most relevant clinical applications of efficient NK-cell transduction. We first tested a single 3rd generation CAR construct recognizing CD22 (Figure 3A). We obtained a transduction rate of 38.3% ± 23.8% (mean ± SD) of NKAES and a high sustained level of CAR-expression (58.4% ± 7.8%; mean ± SD) after sorting and re-expansion (Figures 3B,C). We demonstrated that CD22-CAR-NK-cells efficiently and specifically killed B-ALL RS4;11 target cells, which were resistant to untransduced NKAES (Figure 3D). We could obtain 5 × 108 CAR-expressing cells from 5 × 105 transduced cells after an expansion of 14 days (not shown). Since transgene size affects transduction efficacy (16, 17), we also tested a dual CAR-expressing vector with two independent chains recognizing CD19 and CD22. The length of the dual CAR-CD22/19 LV had a significant impact on virus production and NK transduction was lower (23.1 ± 20.5%; mean ± SD) (Figures 3E,F). However, we were able to sort and re-expand these dual-CAR-transduced NK-cells for 2 weeks, keeping the transgene expression at a high level (79.0 ± 8.7%; mean ± SD) (Figure 3E). These CAR-CD22/19-NKAES killed efficiently CD19KO or CD22KO-RS4;11 cells, which suggest that this strategy could be efficient for preventing tumor evasion to CAR therapy (18, 19) (Figure 3G). 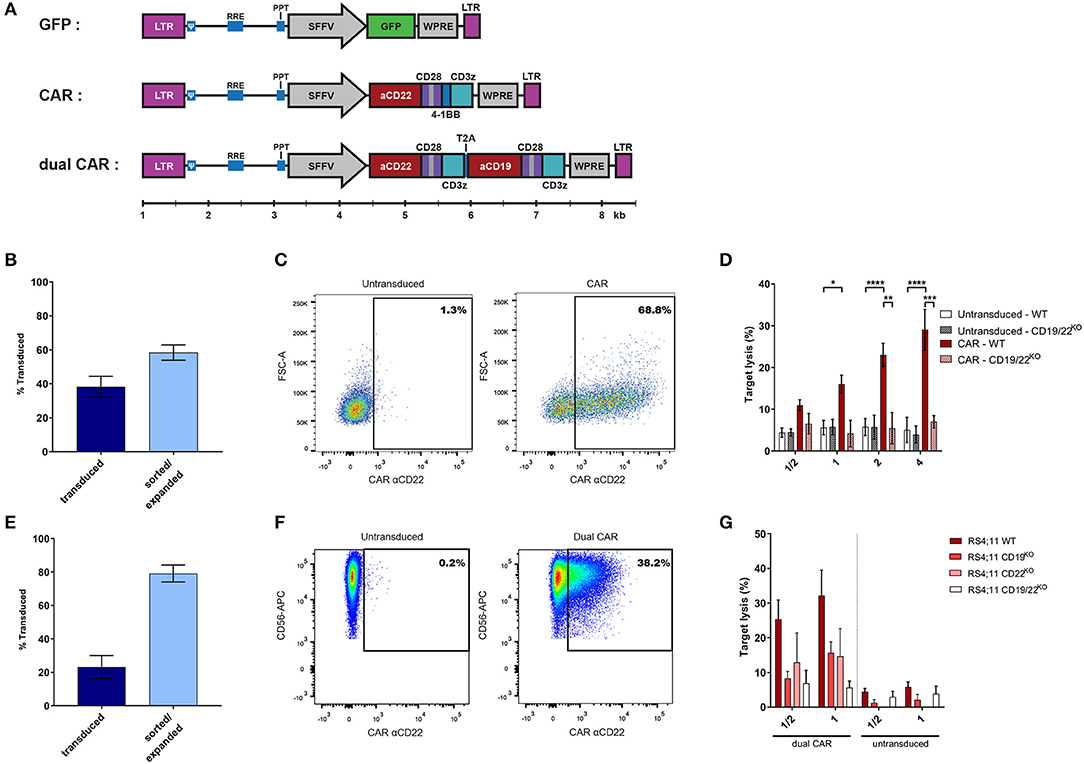 In this study we showed that BaEV-LV is an efficient and robust tool to transduce NK cells. As a proof-of-concept, we generated large numbers of engineered CAR-NK-cells, which induced specific killing of antigen-bearing cancer cells, even with a large dual CAR-LV construct. This technique was robust and reproducible in different expansion systems, including a feeder-cell-free system. The higher level of transduction could open up possibilities for the use of this method to generate an immunotherapeutic product. The prevalence of receptors, as seen by RNAseq, could explain the difference seen between the transduction of activated and resting NK cells. The fact that activated NK cells express both entry receptors at high level could also explain why this envelope protein is more efficient than the others. The development of such a tool could have a major impact on both basic research of NK-cell biology study and NK-cell-based immunotherapy.

The studies involving human participants were reviewed and approved by the institutional ethical board of the CHU Sainte-Justine (approved protocol #CER-3527). The participants (healthy volunteers) provided their written informed consent to participate in this study.

EV has a patent EP2761010 licensed to Lentigen/Miltenyi Inc.

The authors would like to thank Dr. Dario Campana (St. Jude Children's Research Hospital) for the K562-mbIL15-41BBL cell line, and Dr. Rimas J. Orentas from the National Cancer Institute for the CAR-CD22 construct. This manuscript has been released as a Pre-Print at bioRxiv (20).

Copyright © 2019 Colamartino, Lemieux, Bifsha, Nicoletti, Chakravarti, Sanz, Roméro, Selleri, Béland, Guiot, Tremblay-Laganière, Dicaire, Barreiro, Lee, Verhoeyen and Haddad. This is an open-access article distributed under the terms of the Creative Commons Attribution License (CC BY). The use, distribution or reproduction in other forums is permitted, provided the original author(s) and the copyright owner(s) are credited and that the original publication in this journal is cited, in accordance with accepted academic practice. No use, distribution or reproduction is permitted which does not comply with these terms.