A major challenge in dengue vaccine development is to induce robust and protective cross-reactive immunity against all four serotypes of dengue viruses (DENV). DENV 1–4 are antigenically distinct, but closely related viruses (1, 2) with up to 70% sequence homology (3, 4). In endemic countries, co-circulation of multiple serotypes of DENV is prevalent, and therefore, chances of getting either co-infection with multiple serotypes or sequential encounter with heterotypic dengue viruses is a common phenomenon (5).

The current licensed DENV vaccine, Dengvaxia, is a tetravalent vaccine composed of four DENV serotypes. However, the vaccine has limited overall efficacy (approx. 60%) against acute dengue, with only 50% and 35–42% for DENV1 and DENV2, respectively (6–8). Besides antigen selection, optimization and vaccine types in vaccine development, the immunization regimen is also critical. Traditionally, vaccination regimens employ multiple inoculations of immunogens, such as inactivated virus and cocktails of antigens. However, such regimens might not be optimal. Conserved epitopes may be masked by highly variable regions (9, 10), and the presence of these more accessible and non-immunogenic epitopes can “distract” B cell responses (11). Indeed, in a monkey DENV vaccination model, interference between DENV serotypes and immunodominance of certain epitopes led to dominance of neutralizing antibody titers against DENV4 (12). Instead, sequential immunization with a series of directional immunogens with decreasing epitope modifications have been shown to elicit heterologous neutralizing responses against HIV-1 (13). Additionally, our recent publication clearly demonstrated sequential immunization induced stronger and broader T and B immunity against four DENV serotypes than tetravalent-formulated immunization (14). The underlying mechanism of this strategy relies on directing B cell education. The successive boosting with epitopes of decreasing complexity forced B cells to rearrange the immunoglobin and promoted antibody avidity to recognize the conserved epitopes through somatic hypermutations.

One concern for sequential vaccination in DENV vaccine development is the phenomenon of antibody-dependent enhancement (ADE) (15–17). The ADE hypothesis suggests that pre-existing antibodies generated in response to a primary infection may have insufficient antibody avidity or concentration to neutralize secondary infection by a different dengue serotype. During secondary dengue infection, such weakly neutralizing antibodies may promote the infection of Fc receptor-bearing cells leading to virus amplification, cytokine storm and subsequent plasma leakage (18). The occurrence of ADE thus raises safety concerns about whether incomplete protection against all four dengue serotypes prior to complete vaccination can increase disease severity (19). The results from a phase 2b trial of CYD tetravalent dengue vaccine in Thai schoolchildren requiring multiple vaccination doses showed no increased risk for severe diseases during the course of the vaccinations (6). Consistently, clinical trials on monovalent chimeric dengue vaccine (20) and bivalent CYD dengue vaccine (21) both showed a lack of adverse events and viremia after heterotypic dengue vaccine inoculation. These findings demonstrated the safety and feasibility of sequential vaccination.

In this study, we examine whether introducing a series of directional DENV immunogens with decreasing epitope modifications sequentially can improve both T cell and B cell immune responses against four DENV serotypes in mice model. Our results show that epitope-decreasing vaccination potentially induces higher cellular immune responses targeting conserved epitopes compared to repeated immunization with a priming immunogen. We further study the immunoglobulin diversification in antigen-specific B cells after each immunization to understand the evolutionary dynamics in different immunization approaches.

C57BL/6J (B6) mice were used for the experiment. Mice were bred and housed at the Animal Facility, National University of Singapore (NUS). All procedures and care were approved by the NUS Research Ethics Committee under Protocol R13-6157. All ethical regulations regarding animal research were complied with.

Neutralizing antibody titer (nAb) was determined by PRNT as previously described (24) on four strains DENV1/2402DK1, DENV2/3295DK1, DENV3/863DK1 and DENV4/2240DK1. The highest serum dilution that resulted in 50% or more plaques reduction compared to the virus control wells was considered as the neutralizing endpoint titer (PRNT50).

Ninety-six-well plates were coated with 1µg/ml in-house produced recombinant EDIII protein and kept at 4°C overnight. The plates were washed 5 times with PBST (0.05% Tween 20) and blocked with 5% BSA at 4°C overnight. After washing, serum samples were added to plates in dilution from 1:200 to 1:25,600 and incubated for 2 h in 37°C. Secondary HRP-labeled anti-mouse IgG diluted to 1:5000 was added to plates and incubated for 1 h at 37°C. TMB substrate was added and the absorbance was read at 450nm. The cut-off threshold was set at least two times higher than the result of negative sera sample. The titer was determined by the last dilution giving value above the cut-off threshold.

A total of 10,000 DENV-specific B cells (either DENV1+ or DENV2+ or DENV1+DENV2+) were sorted on FACS Aria II cell sorter (BD Biosciences). The RNA extraction, cDNA synthesis and target gene amplification, sequencing library preparation as described previously (14). The libraries were multiplexed and subjected to MiSeq V3 2×301 bp sequencing.

Raw sequences were processed using the toolkit “pRESTO” (version 0.5.13) (25). Briefly, the paired-ends MiSeq data was firstly assembled into a full-length B cell receptor (BCR) sequences, followed by removing the low-quality reads, annotating Ig isotype, masking the primer regions and yielding the final sequences comprised of unique sequence with at least two representative reads. The IMGT/High database of mouse immunoglobulin repertoire was used as reference to perform V(D)J alignment using IgBLAST in tool “Change-O” (version 0.4.6) (26). The V segment genotypes were inferred using package “TIgGER” (version 0.2.10) (26). Ig sequences were assigned into clonally related lineages and the full germline sequences were built after preforming automated detection of the clonal assignment threshold by using package “SHazaM” (version 0.2.1) (26). Mutations were defined as nucleotides that were different from the inferred germline sequence. The clonal diversity of the repertoire was analyzed using the general form of the diversity index, as proposed by Hill (27) and implemented in the package “Alakazam” (version 0.3.0) (26). The somatic hypermutation targeting models were computed by the SHazaM software (version 0.2.1) (26). The raw data has been deposited in Gene Expression Omnibus (GSE154371). 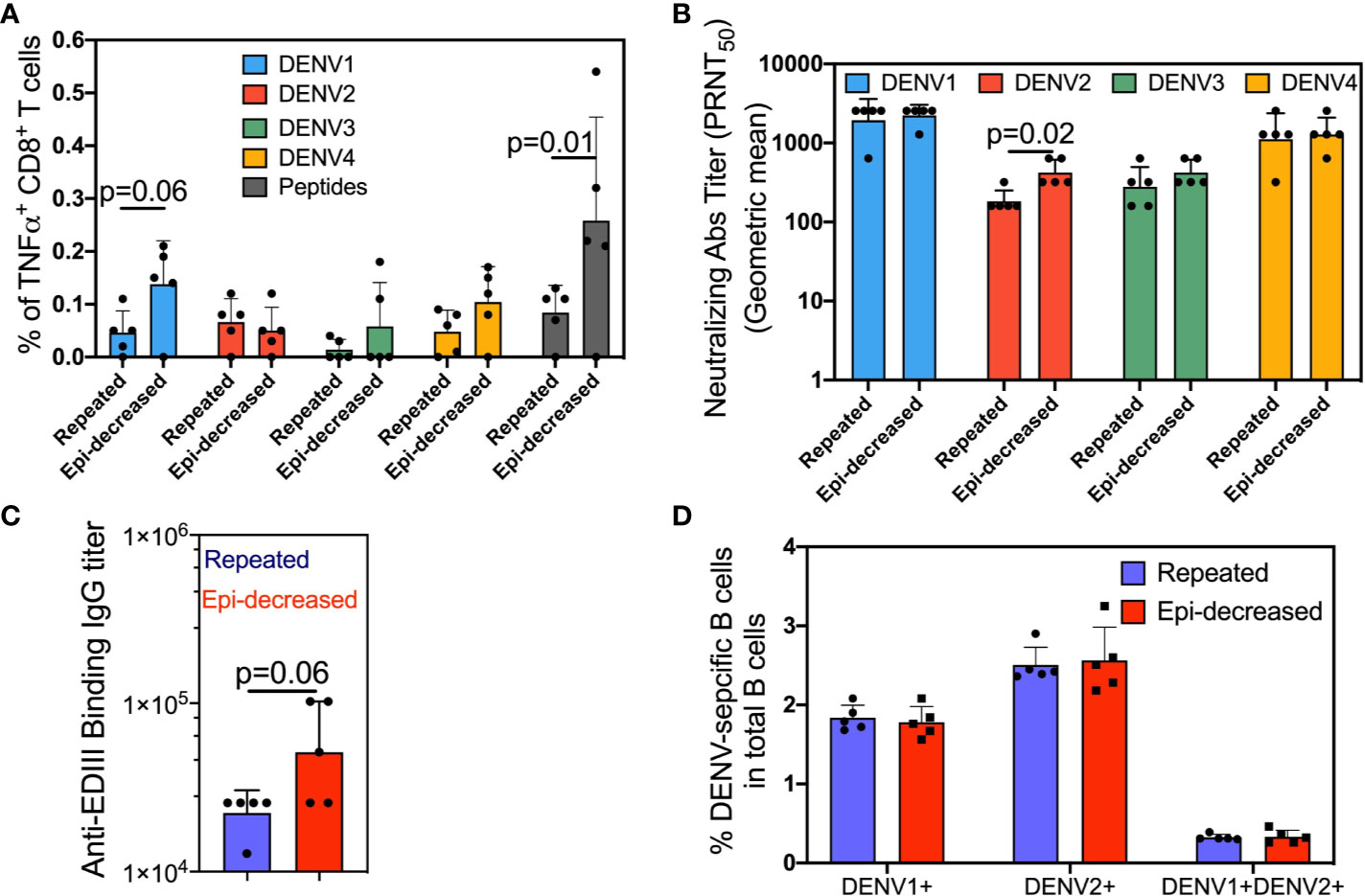 To further investigate and quantify homo- and heterotypic antigen-specific B cell responses following two immunizations, we utilized DENV1/E-AF647 and DENV2/E-AF548 to stain for DENV1 and DENV2-specific B cells in the spleen two weeks after the last immunization dose. Both repeated immunization and epitope-decreasing immunization induced comparable levels of homotypic DENV1+ or heterotypic DENV2+ single positive, and cross-reactive (DENV1+ and DENV2+ double-positive) B cells (Figure 1D).

Cumulatively, these results suggest that epitope-decreasing immunization strategy is beneficial for inducing T cell responses and promoting nAb responses that target conserved immunodominant regions, such as the EDIII domain.

Table 2 The summary of RNA-seq results. 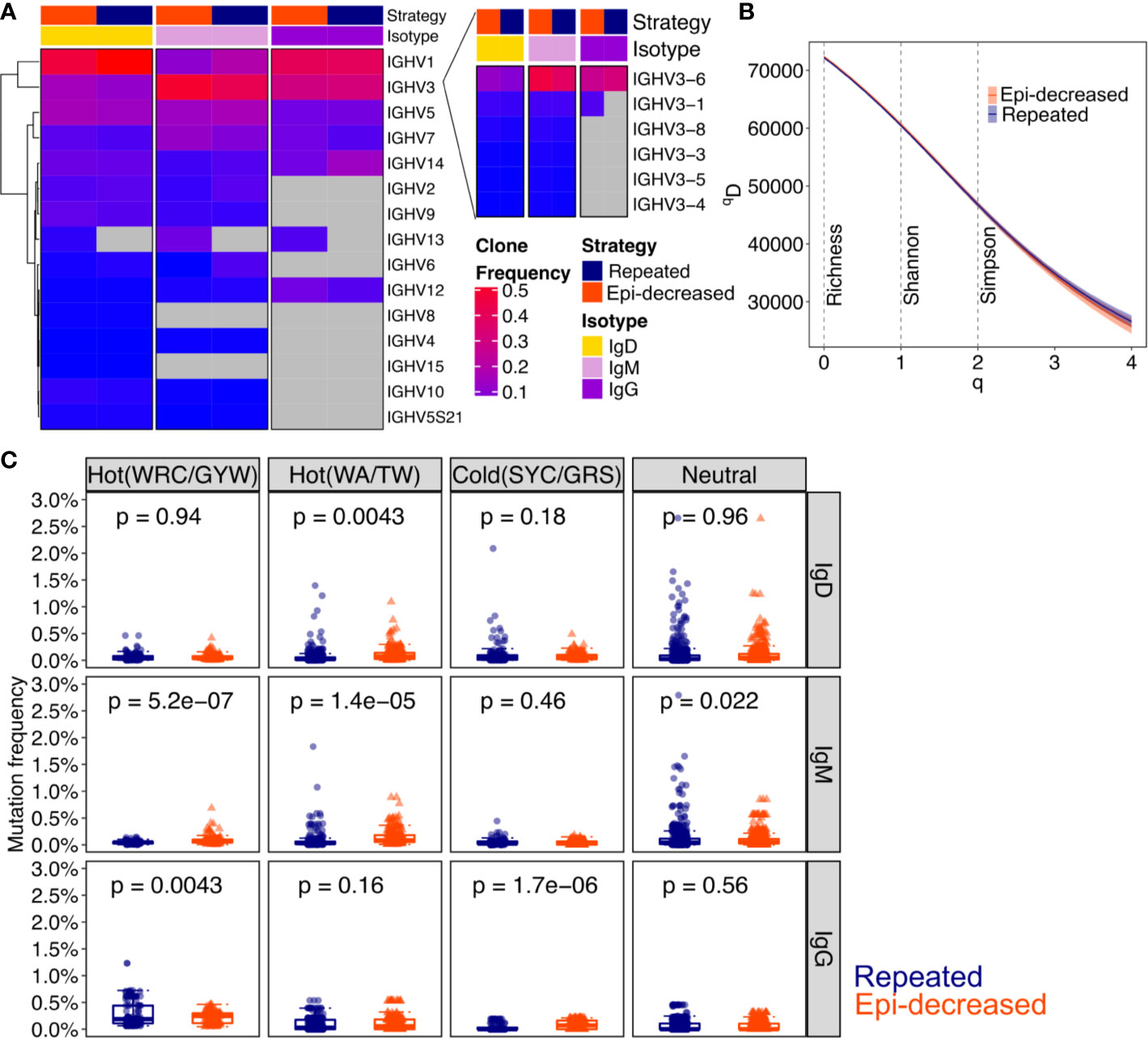 Figure 2 The characteristic of immunoglobulin and somatic hypermutation induced by different strategies. (A) Heatmap shows the VH family usages by clone frequencies with red to blue to grey corresponding to from high, low to absence. Strategy indicates the immunization and isotype indicates IgD, IgM and IgG. The Chi-square test was performed for statistical analysis. (B) The clonal diversity analysis was performed by using the generalized Hill’s diversity index. The diversity index (qD) was calculated over a range of diversity orders (q) and plotted as a smooth curve. The qD values depict the level of diversity for a given value of q. The lower qD values represent lower diversity. Shaded area represents 95% percentiles. The Richness diversity index, which equates to q = 0, the Shannon diversity index, q = 1, and the Simpson diversity index, q = 2, were plotted as dashed vertical lines. (C) The bar plots for the levels of somatic hypermutation (SMH) in hot- and cold spots with Ig isotypes. SMH targeting profiles were analyzed for 5-mer motifs from both immunization strategies. The WRC/GYW hotspot motifs, WA/TW hotspot motifs, SYC/GRS cold spot motifs and neutral spots are shown. Each dot represents a 5-mer motif and each box covers the 25th – 75th percentiles of the mutability rates of the 5-mer motifs in its corresponding groups, with the horizontal bar indicating the median. The p values show the statistical significance by Wilcoxon test analysis for indicated groups.

Together, these results suggest that epitope-decreasing immunization, through antigen-driven progression, reinforces some mutations through somatic hypermutations to generate high specificity and affinity antibody that recognize conserved domains.

A comprehensive understanding of how vaccine elicits protective and broadly cross-reactive immune responses is critical when handling pathogens that deceive and escape the immune memory by continually changing their antigenic characteristics. Here, we investigate the effect of epitope-decreasing sequential immunization strategy on the generation of cross-reactive responses against DENV1-4. Epitope-decreasing immunization can be considered as a form of supervised learning, which guides the immune response to focus on conserved domains.

As neutralization of DENV1 is generally weaker compared to other dengue serotype, we investigated the T cell and B cell responses induced by repeated live DENV1 virus vaccination compared to sequential vaccination with DENV1 live virus, followed by DENV1 Env protein and finally by DENV1 EDIII subunit protein in mice model. In agreement with previous reports, as the complexity of the immunogens decreased, the immune responses elicited were guided toward immunodominant targets (13). In this study we show that epitope-decreasing immunization can reinforce specific T cell immune responses on consensus epitopes. Additionally, it also induces heterotypic humoral immunity as shown by nAb capable of cross-neutralizing DENV2 and DENV3. This presumptively is due to antibodies generated through epitope-decreasing immunization having greater binding capacity for EDIII domains.

The immunoglobulin repertoire sequencing results revealed that successive boost with epitope-decreased antigens generated similar Ig diversity as repeated immunization strategy. This suggest that repeated homologous immunization does not effectively increase Ig diversity as not all exposed surfaces of the DENV1 virus are antigenic epitopes. Consequently, epitope-decreased sequential immunization not only did not lead to a loss of Ig diversity, but also help to navigate T and B cells to focus on the conservative epitopes.

The sequential immunization approach presumptively can educate the memory cell to recognize homological domains that have a high probability of harboring conserved epitopes (11). Through stepwise boosts with antigens of decreasing epitope complexity, shared domains are emphasized thereby allowing the development of cross-reactivity. Sequential immunization serves to train the memory immune response to concentrate on “familiar” domains that already existed in the memory subset, thus directing antibody evolution. On the other hand, the consistent immunogens used in repeated immunization may burden the naïve or memory cells due to antigenic variation and frustrate memory maturation impeding cross-reactive Ab formation. In a realistic way, the principle of sequential immunization generally aligns with the reality for individuals living in dengue endemic areas, whose immune responses may become protective after multiple heterotypic exposures. Moreover, through this specific epitope decreasing approach, we were able to find a similar affect based on the use of sequential immunization but avoid the potential side effect of vaccine-induced ADE, which will pave the way for a safe and effective use of the vaccine and to combat the virus.

Finally, this study sheds light on how we can manipulate the immune system and supervise it to focus immunity on specific conserved domains to achieve the goal of broad cross-reactivity.

The animal study was reviewed and approved by National University of Singapore (NUS) Research Ethics Committee under Protocol R13-6157.

This work was supported by the National Research Foundation of Singapore through the Singapore–MIT Alliance for Research and Technology’s (SMART) Interdisciplinary Research Group in Infectious Disease Research Program.

We thank Hwee Cheng Tan for preparing the dengue viruses, and Farzad Olfat for administrative support.

Copyright © 2020 Hou, Ye, Loo, Wong and Chen. This is an open-access article distributed under the terms of the Creative Commons Attribution License (CC BY). The use, distribution or reproduction in other forums is permitted, provided the original author(s) and the copyright owner(s) are credited and that the original publication in this journal is cited, in accordance with accepted academic practice. No use, distribution or reproduction is permitted which does not comply with these terms.

Development of Vaccines Against Emerging Pathogens