Immunological Microenvironment Alterations in Follicles of Patients With Autoimmune Thyroiditis

Autoimmune thyroiditis (AIT) is the most prevalent autoimmune endocrine disease, with a higher incidence in women than in men. Immunological abnormalities may lead to the impairment of ovarian folliculogenesis; however, whether the presence of AIT affects immunological microenvironment in follicles remains controversial. We performed a cross-sectional study including 122 patients, aged 20–40 years, who underwent IVF/ICSI treatment owing to isolated male or tube factor infertility. Patients were divided into AIT and control groups according to clinical presentation, thyroid function, and thyroid autoantibody measurements. Follicular fluid was collected and the distribution of cytokines/chemokines in follicular fluid was measured by flow cytometry using multiplex bead assays between the two groups. Based on differences in levels of intrafollicular chemokines and cytokines between the AIT and control groups, the relevant inflammatory cascade was further demonstrated. Among the 12 chemokines analyzed, three (CXCL9, CXCL10, and CXCL11) showed significantly elevated levels in the follicular fluid of patients with AIT. Among the 11 cytokines detected, compared with those in the control group, significantly higher levels of IFNγ were observed in patients with AIT. IFNγ dose-dependently stimulated the expression and secretion of CXCL9/10/11 in cultured primary granulosa cells. The percentage of CXCR3+ T lymphocytes was significantly elevated in the follicular microenvironment of patients with AIT. We concluded that the IFNγ-CXCL9/10/11-CXCR3+ T lymphocyte inflammatory cascade is activated in the follicular microenvironment of patients with AIT. These findings indicate that a considerable immune imbalance occurred in the follicular microenvironment of patients with AIT.

Autoimmune thyroiditis (AIT) is an organ-specific autoimmune disorder characterized by the production of autoimmune thyroid antibodies and the infiltration of self-reactive lymphocytes into the thyroid, resulting in the destruction of thyrocytes and hypothyroidism. T cell-mediated immune disorders play an important role in the pathogenesis of AIT. In patients with AIT, both in the peripheral blood and in the thyroid gland, the balance between Th1 and Th2 cells is skewed toward Th1 cells and cytotoxic T lymphocytes are considerably activated, which triggers a dramatic activation of the immune response. Meanwhile, pro-inflammatory cytokines such as interferon-gamma (IFNγ) and IL-17 were significantly elevated. Pro-inflammatory chemokines CXCL9, CXCL10, and CXCL11 were also activated in patients with AIT, which further promoted the migration of pro-inflammatory Th1 lymphocytes into the thyroid and aggravated the destruction of the thyroid gland (1–4).

Immunological abnormalities may lead to the impairment of ovarian folliculogenesis; however, whether the presence of AIT affects follicular development and ovulation remains controversial and the relevant studies are limited. Our previous large-scale retrospective cohort study found that after adjusting for thyroid function and ovarian reserve markers, the number of oocytes retrieved during in vitro fertilization/intracytoplasmic sperm injection (IVF/ICSI) treatment significantly decreased in infertile women with positive thyroid antibodies. This suggests a possible role of AIT in follicular development; however, the mechanism remains unclear (5).

Follicle development and oocyte maturation depend heavily on the follicle fluid, which is derived from blood infiltration and ovarian secretion. An altered follicular microenvironment may directly damage follicle recruitment and growth. A large number of cytokines/chemokines are activated in follicular fluid and interact with each other to form a network that regulates folliculogenesis, oocyte maturation, and luteinization (6). Recent studies have reported an association between abnormal elevation of specific cytokines/chemokines and follicle developmental disorders (7, 8).

This study aimed to investigate the distribution of intrafollicular cytokines/chemokines and the activation of relevant inflammatory pathways in patients with AIT compared to those without AIT.

The study consisted of 122 patients, aged 20–40 years, who underwent IVF/ICSI treatment owing to isolated male or tube factor infertility. Patients were divided into AIT and control groups according to clinical presentation, thyroid function, and thyroid autoantibody measurements. The reference values for serum thyroid-stimulating hormone (TSH) were 0.55–4.78 uIU/mL, and those for serum-free thyroxin (FT4) were 0.89–1.80 ng/dL. The detection range for thyroglobulin antibody (TGAb) was 15–500 IU/mL, and that for thyroid peroxidase antibody (TPOAb) was 28–1300 IU/mL. A value >60 IU/mL was defined as positive for TGAb or TPOAb. Patients positive for TGAb and/or TPOAb were placed in the AIT group. The levels of TSH and FT4 in all patients were required to be within the normal reference range prior to controlled ovarian stimulation; thus, 14 patients that were thyroid antibody-positive received oral levothyroxine owing to abnormal TSH and FT4 levels. Patients with a history of other reproductive diseases, such as polycystic ovarian syndrome or endometriosis; a history of other thyroid diseases, such as hyperthyroidism or thyroid cancer; abnormal results on parental karyotyping; other endocrinological diseases, such as hyperprolactinemia or diabetes; or positive tests for antinuclear antibodies or lupus anticoagulants were excluded.

All patients underwent standardized protocols for controlled ovarian stimulation (COS) and oocyte retrieval. The individualized dose of recombinant follicle-stimulating hormones for inducing COS was decided based on the patient’s age, body mass index (BMI), antral follicle count, and anti-Mullerian hormone levels. Two hundred and fifty micrograms of recombinant human chorionic gonadotropin (HCG; Eiser, Serono, Germany) was administered to trigger oocyte maturation when at least two follicles reached 18 mm. Oocyte retrieval was performed 34–36 h after HCG administration. Follicular fluid without visible blood contamination was aspirated from the first and largest follicle, collected separately and centrifuged at 800 g for 10 min. Supernatants were collected and stored at −80°C until further analysis.

Primary granulosa cells were collected from follicular aspirates and purified via centrifugation at 600 g for 30 min using the Ficoll gradient method. For chemokine secretion assays, primary granulosa cells were seeded onto six-well plates in growth medium (Dulbecco’s modified Eagle’s medium/Ham’s F-12 nutrient mixture containing 10% fetal bovine serum). The growth medium containing leukocytes was removed after 24 h, granulosa cells were washed in PBS, and incubated in serum-free growth medium. Cells were incubated for 24 h with different doses of IFNγ (R&D Systems; 500, 1000, 5000, and 10,000 IU/mL). The supernatant was removed after 24 h and stored at −20°C until required for the chemokine assay.

The percentage of intrafollicular CXCR3+ T lymphocytes was detected in 14 patients with AIT and in the 12 control patients. The remaining follicle fluid in each patient was collected after the oocytes were removed and centrifugated at 800 g for 10 min. Cells were aspirated and washed with Dulbecco’s PBS. The cells were treated with lysis buffer (BD Biosciences) to remove red blood cells. Approximately 2 × 106 cells were filtered through a 70-μm mesh to remove clumps of cells. Cells were incubated with 100 μL PBS containing CD45 microbeads and CD45 antibody. CD45+ cells were isolated using a MACS separator (Miltenyi Biotec). Cells were further phenotyped by staining with CD3, CD4, and CD183 (CXCR3) and counted using a flow cytometer (BD FACSCelesta™).

Table 1 Baseline characteristics in patients with and without autoimmune thyroiditis (AIT). 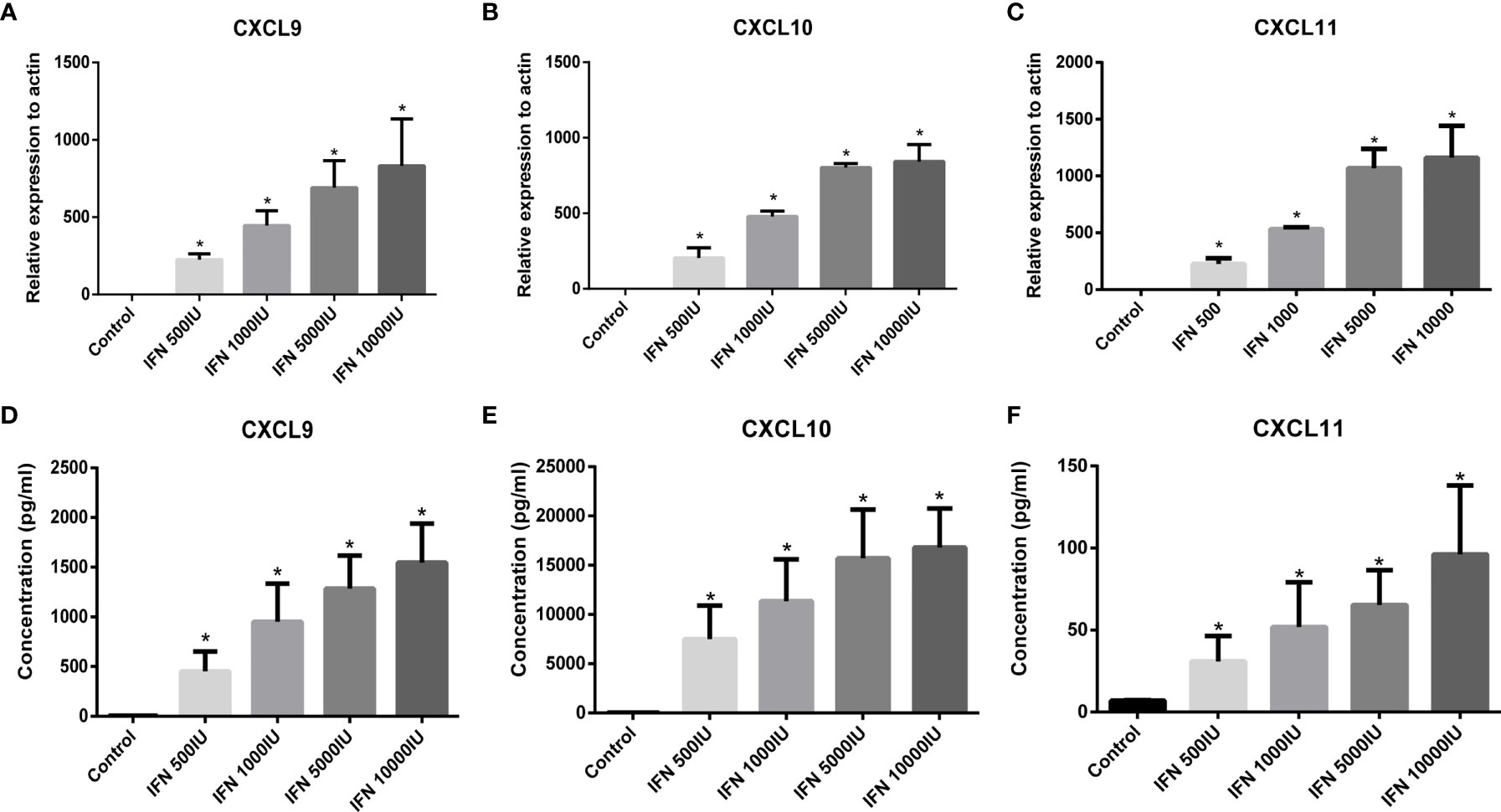 Our study is the first to demonstrate the substantial activation of IFNγ-CXCL9/10/11-CXCR3+ T lymphocytes in the ovarian microenvironment of patients with AIT. This cascade included a classical inflammatory response: IFNγ secreted by T lymphocytes stimulated the release of CXCL9/10/11 from granulosa cells. CXCL9, CXCL10, and CXCL11 belong to the chemokine family and share the common receptor CXCR3, which is particularly expressed in T lymphocytes. Elevation of CXCL9/10/11 in follicle fluid attracts CXCR3+ T lymphocytes to infiltrate the follicle. T lymphocytes that remained in the follicle further increased the secretion of IFNγ, which constitutes an intact response loop in the follicular microenvironment (Figure 4). 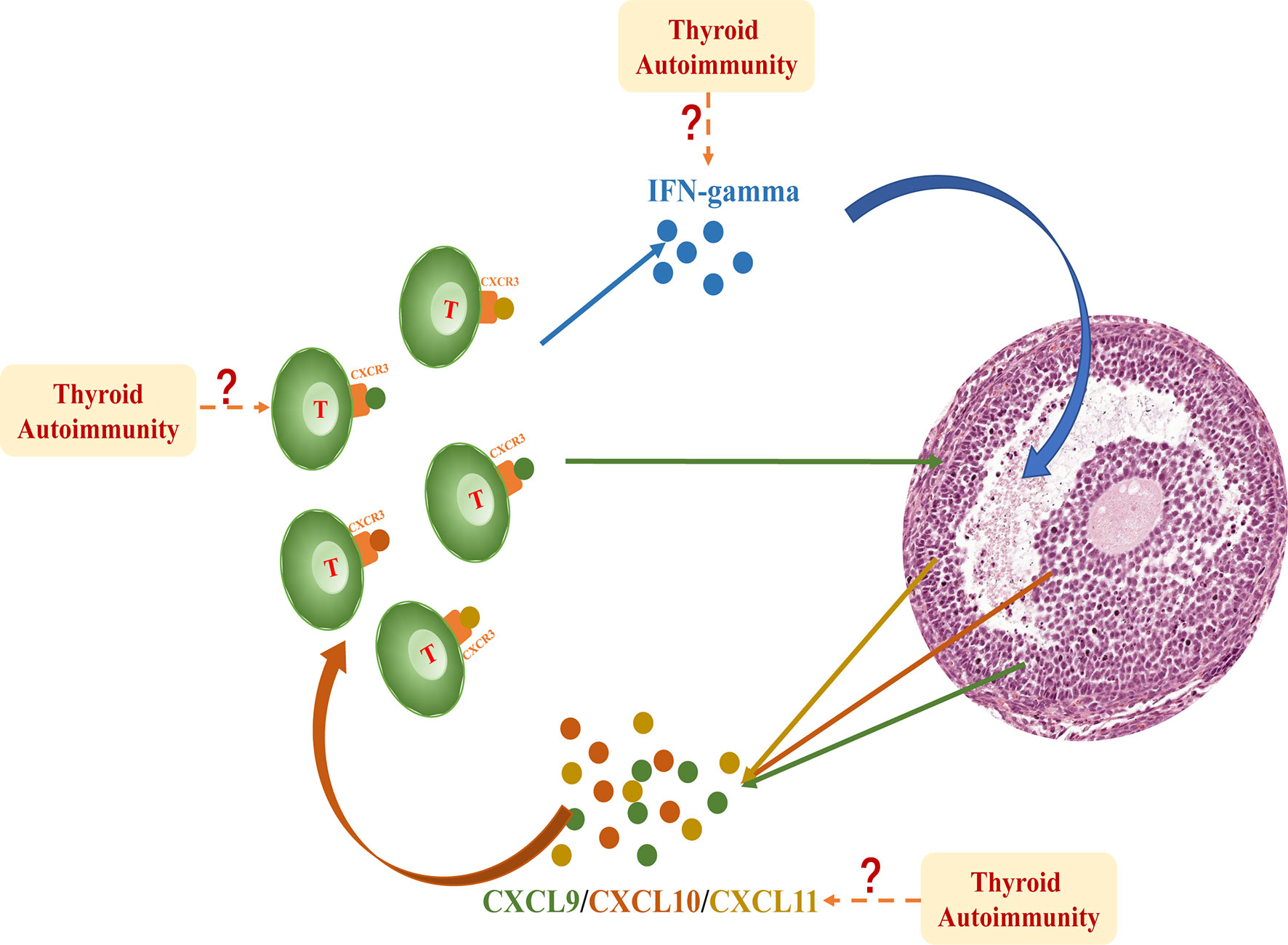 Figure 4 IFNγproduced by T lymphocytes dose-dependently induced the expression and secretion of CXCL9/10/11 in primary granulosa cells. These chemokines bind to their receptor CXCR3 and further promote the migration of T lymphocytes into the follicle, thereby perpetuating an inflammatory cascade in the follicular microenvironment. This intrafollicular response is significantly activated in patients with AIT; however, the initiation of this cascade is still unclear. The excess influx of inflammatory cells and factors into the follicle fluid may be involved in this mechanism.

There is increasing evidence to demonstrate the role of intrafollicular inflammation in the pathogenesis of reproductive diseases. A previous study analyzed the association between follicular pro-inflammatory cytokines/chemokines and infertility related diseases and showed that different types of cytokines/chemokines were activated in patients with different reproductive diseases. For example, higher follicular MIP-1α (CCL3) and CD44 were correlated with polycystic ovary syndrome and IL-23, IFN-γ, and TNF-α correlated with endometriosis (11). An imbalance between pro-inflammatory cytokines such as IFNγ and TNFα and anti-inflammatory cytokines such as IL-10 has also been reported to play a critical role in the pathological mechanism of premature ovarian insufficiency (8). Our study showed a significant difference in the distribution of intrafollicular chemokines and cytokines between the AIT and control groups, suggesting the presence of an activated abnormal immune response in the follicular microenvironment in patients with AIT.

CXCL9/10/11 belongs to a family of chemokines with the capacity to attract circulating leukocytes to inflammatory sites by binding to their specific receptor, CXCR3. Prior to ovulation, only a few resident immune cells were present in vessels around the thecal cells. Upon LH surge or stimulation by HCG, the basal lamina is disrupted and several capillaries form and extend into the granulosa cell compartment, with numerous infiltrating leukocytes and a large number of cytokines are secreted into the follicle fluid (16). The association between the infiltration of leukocytes and ovulation is not completely clear, and the complexity of the inflammatory response and leukocyte types makes it difficult to investigate the role that a specific type of leukocyte plays in follicle fluid. A previous study reported that perfused LH and leukocytes in rat ovaries produced a higher number of ovulations; however, perfused leukocytes alone failed to induce ovulation, suggesting that the influx of leukocytes plays a synergetic, yet not necessary, role in ovulation (17). In our study, elevated CXCL9/10/11 levels enhanced the migration of T lymphocytes via CXCR3 and led to a higher proportion of intrafollicular T lymphocytes in patients with AIT, which may aggravate the regional inflammatory response.

Second, local activation of the inflammatory response may be another hypothesis for the initiation of this cascade. A previous study identified thyroid peroxidase using immunocytochemistry in granulosa cells of the human ovarian follicle and provided a hypothesis that the human ovarian follicle may be an independent thyroid-hormone-producing unit (19). Here, thyroid antibodies were detected in the follicular fluid of patients with AIT, with a similar concentration in the serum (Table 1). The presence of thyroid peroxidase and thyroid antibodies in follicular fluid may provide a hypothesis for activation of the intrafollicular antibody-mediated immune response.

Although our findings demonstrate an immunological alteration occurred in follicles of patients with AIT, whether the substantial activation of inflammatory cascade affect folliculogenesis requires further study.

This work was supported by the National Natural Science Foundation of China (Grant No. 81871212) and The Second Tibetan Plateau Scientific Expedition and Research (Grand No. 2019QZKK0607).

Copyright © 2021 Huang, Liu, Lian, Chi and Qiao. This is an open-access article distributed under the terms of the Creative Commons Attribution License (CC BY). The use, distribution or reproduction in other forums is permitted, provided the original author(s) and the copyright owner(s) are credited and that the original publication in this journal is cited, in accordance with accepted academic practice. No use, distribution or reproduction is permitted which does not comply with these terms.