Fish in aquatic environments generally obtain oxygen from the water. Mud loaches inhabit muddy swamps, ponds, and rice fields subject to periodic drying. The respiratory systems of freshwater fish subject to drought have adapted to enable cutaneous/air respiration via other organs. Loaches can breathe in water or soil depending on the dissolved oxygen content (Park et al., 2001). Mud loach aquaculture in freshwater is common in South Korea, Taiwan, China, and Japan. The mud loach Misgurnus mizolepis belongs to the family Cobitidae and is widely used in basic biological research. It can live in soil and water and survive in human wastewater, such as ditches and septic tanks; it is also useful for harvesting antimicrobial peptides. Controlling disease outbreaks in aquaculture systems, such as the 2012 Aeromonas sobria outbreak that caused 61% mortality in 2 days, is a major challenge. This devastated fisheries aquaculture production; the production in the previous 5 years averaged 766 tons and was valued at $ 7.2 M (https://www.kostat.go.kr/). Considering the above, and to expand genetic research to preserve this species, we generated a draft genome for Misgurnus mizolepis. Presently, only the mitochondrial genome of this species is available (Lee, 2016) and no nuclear genomes for the family Cobitidae have been reported.

Value of the Data

The gDNA and RNA were isolated from the samples by the DNeasy Animal Mini Kit and RNeasy Animal Mini Kit (QIAGEN, Hilden, Germany), respectively. The isolated gDNA sequenced with PacBio Sequel platform (Pacific Biosciences of California, Menlo Park, CA, USA), by capturing a 240-min movies for each SMRT cell. The RNA from the same individual was converted into cDNA using the SMARTer PCR cDNA Synthesis kit and subjected for the above steps for SMRTbell™ library preparation (except for fragmentation), and then sequenced with the PacBio Sequel platform. Similarly, another portion of the isolated gDNA and RNA from three different tissue samples of the three biological replicates was used to prepare sequencing libraries with the stranded Illumina paired-end (PE) protocol, using the TruSeq Nano DNA Prep Kit and TruSeq Stranded mRNA LT Sample Prep Kit (Illumina, San Diego, CA, USA), respectively. The Illumina NovaSeq6000 sequence machine used with desire size of DNA and RNA fragments.

Error correction for the complete sequence processed with SMRT Analysis v2.3, and imported into a diploid-aware FALCON (Chin et al., 2016) genome assembler used to assemble long contigs from the PacBio reads. Additionally, assembled contigs subjected to polishing by Quiver method to reduce the base call errors (Chin et al., 2013). Further, contigs were used to assess the genome completeness with BUSCO v5.0 (Simão et al., 2015). The reference BUSCO dataset was actinopterygii_odb10. The quality of the assembled genome was assessed by short-read mapping to the draft assembly with Bowtie2. Finally, the assembled contigs were scaffolded based on 25 chromosomes of the stone loach Triplophysa tibetana genome (GCA_008369825.1), which belongs to suborder Cobitoidei, using RagTag v2.0.1 (Alonge et al., 2019). The unknown sequences between contigs in a scaffold were filled with 100 bp of N.

Repeat regions in assembled genome were predicted using the de-novo method and categorized into repeat subclasses; de novo repeats estimation for M. mizolepis was conducted using RepeatModeler, which incorporated with methods as RECON (Bao and Eddy, 2002), RepeatScout (Price et al., 2005), and TRF (Benson, 1999). Those modeled repeats were sub-categorized using the Repbase v20.08 database as a reference (Bao et al., 2015), and the repeats were masked using RepeatMasker v4.0.5 with RMBlastn v2.2.27+.

The pre-processed RNA-Seq reads from the liver, muscle, and brain tissues of three biological replicates were mapped to the coding sequences of the predicted genes using Salmon v1.4 (Patro et al., 2017). Genes with NumReads (estimated read counts) values greater than five and transcript per million (TPM) values > 0.3 in one or more tissue-specific group(s) were counted as expressed. Differentially expressed genes (DEGs) were identified using edgeR v3.30 in the TCC v1.28 R package (Robinson et al., 2010; Sun et al., 2013), with a threshold of 2 for log2 fold-change values and 0.05 for false-discovery rates (FDRs) in the pairwise control-case comparisons.

Initially, the M. mizolepis genome was estimated to be 974.4 MB (Figure 1A), with 49.6 GB of short read sequences (Table 1A; Supplementary Tables 1, 2); 1.112 GB of the representative contigs were de-novo assembled from 96.2 GB of error-corrected long read sequences (Supplementary Tables 2, 3). Then, the de-novo assembled contigs were scaffolded into 135 scaffolds of the draft genome, with a scaffold length N50 of 41,826,286 bases and an average scaffold length of 8,237,736.20 bases (Table 1B; Figure 1B). In total, 574 MB (i.e., 51.65%) of the draft genome was covered by repeats, in which DNA elements dominated (i.e., 28.09%) (Table 1B; Figure 1C; Supplementary Table 5). First, 99.33% of the pre-processed whole-genome sequencing reads, and an average of 81.82% of the pre-processed RNA-Seq reads, were mapped on the draft genome (Supplementary Table 1; Supplementary Figure 2). In total, 43,153 genes predicted in the genome, with an average size of 10,169.51 bases and a 95.8% complete BUSCO score (Tables 1B,C and Figure 1D). Ultimately, 33,326 genes had homologous sequences in GenBank and 31,338 had Gene Ontology annotations (Table 1D). Of the 43,153 genes, 24,699 were found to be expressed and 13,385 were DEGs (Supplementary Table 6; Supplementary Figure 3). The mitogenome was assembled into a complete circular sequence of 16,570 bases, annotated with 13 protein-coding genes, 22 tRNA genes, and 2 rRNA genes (Greiner et al., 2019) (Supplementary Table 7; Supplementary Figure 4). The complete workflow used in this study is shown in Supplementary Figure 1. This is the first genome assembly for the family Cobitidae. Due to the lack of genomic knowledge of this lineage, most of the NCBI-NR BLAST annotations overlapped with the proteome of the closely related suborder Cyprinoidei, which have well-established genomic profiles (Figure 1E). Distinct HoxBb cluster duplication was inferred in the M. mizolepis genome, but was not found in most genomes of closely related teleosts, including zebra fish (Danio rerio) (Hoegg et al., 2007; Henkel et al., 2012) (Figure 1F). This first genome assembly for the family Cobitidae can be used to elucidate additional genomic features to better understand this lineage, and provides new insight for comparative genomic studies of teleosts. 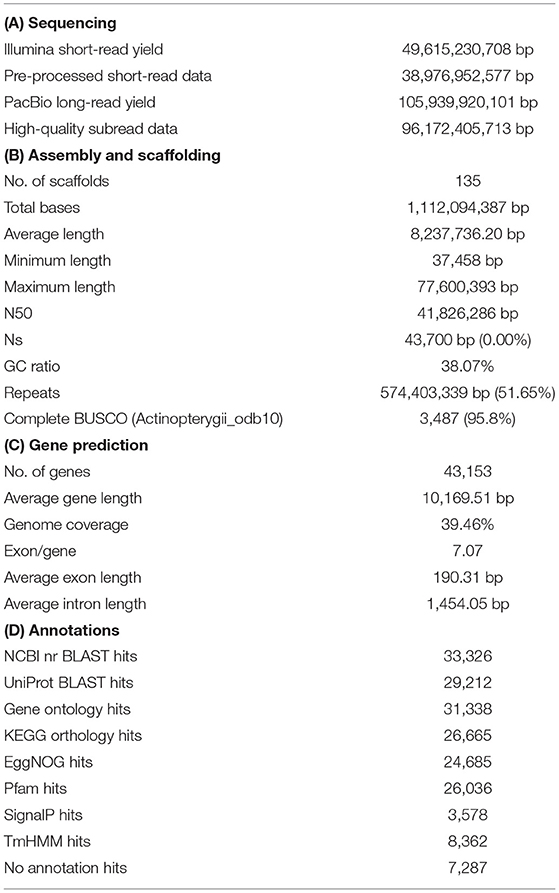 Table 1. Summary of the sequencing for annotation of the Misgurnus mizolepis draft genome.

The animal study was reviewed and approved by National Institute Fisheries Science (2018-NIFS-IACUC-03). Written informed consent was obtained from the owners for the participation of their animals in this study.

This work contributed by the Collaborative Genome Program of the Korea Institute of Marine Science and Technology Promotion (KIMST) funded by the Ministry of Oceans and Fisheries (MOF) (No. 2018043) and the National Institute of Fisheries Science (R2021041).

The Supplementary Material for this article can be found online at: https://www.frontiersin.org/articles/10.3389/fmars.2021.799148/full#supplementary-material

Copyright © 2022 Shin, Noh, Jeon, Shin, Kim, Kim, Kim, Jung and Nam. This is an open-access article distributed under the terms of the Creative Commons Attribution License (CC BY). The use, distribution or reproduction in other forums is permitted, provided the original author(s) and the copyright owner(s) are credited and that the original publication in this journal is cited, in accordance with accepted academic practice. No use, distribution or reproduction is permitted which does not comply with these terms.

Advances in the Biology, Aquaculture, and Conservation of Threatened Marine Species and their Application in Human Health and Nutrition