Impact of interspecific interactions on antimicrobial activity among soil bacteria

Whole genome sequencing has revealed that many soil microorganisms possess so-called cryptic gene clusters encoding for putative new secondary metabolites that are not produced during common in vitro conditions (Ikeda et al., 2003; Scherlach and Hertweck, 2009; Chiang et al., 2011; Saleh et al., 2012). In nature, however, antibiotics may be produced after perception of specific environmental signals (stress/nutrient signals) or signals from neighboring microorganisms (competitor sensing) (Firn and Jones, 2003; Cornforth and Foster, 2013; Zhu, 2014). Indeed, several studies have indicated that antibiotic production in soil bacteria can be induced when they are confronted with other bacterial species (Slattery et al., 2001; Lyon and Muir, 2003; Maurhofer et al., 2004; De Boer et al., 2007b; Seyedsayamdost et al., 2012). We hypothesize that competitor induced (facultative) rather than constitutive antibiotic production represents a key strategy in interference competition that is cost-effective and/or may reduce selection of antibiotic-resistant competitors (Garbeva et al., 2011b). Interaction-mediated induction of antibiotic production is also interesting from an applied perspective as it may lead to the discovery of novel antibiotics.

The aim of the current study was to obtain insight in the frequency of interaction-mediated induction of antibiotic production in natural soil bacterial communities. To this end, we screened a collection of bacterial isolates obtained from similar soil habitats. We developed and applied a high-throughput method to screen bacteria for the production of compounds that inhibit growth of Gram-positive and Gram-negative isolates that are closely related to human pathogens. By selecting these target organisms the study not only revealed information on the frequency of interaction-mediated antibiotic production, but also on specific soil bacterial genera or species that could be promising candidates for the discovery of novel antibiotics. The obtained results revealed that interactions have a major impact on antimicrobial compound production albeit with effects in both directions i.e., induction and suppression of antimicrobial activity.

96-well Microtiter plates (Greiner bio-one B.V., Alphen a/d Rijn, The Netherlands, Cat# 655180) were prepared to inoculate the selected bacterial isolates and the reference strains. Each well was filled with 150 μl liquid LB broth. Bacterial isolates were inoculated in 10 rows containing quadruplicates of each strain, the 11th row was kept empty and the 12th row was used as positive control by inoculating known antibiotic-producing Streptomyces strains in duplicate with one free well between each strain (Figure 1). Inoculation was done by picking cells from a single colony of each bacterial strain with a disposable inoculation loop (VWR international B.V., Amsterdam, The Netherlands Cat# 50806-404) and transferring to the designated well in the 96-well source plates. The plates were incubated for 2 days at 24°C, after which the plates were prepared for long-term storage (−80°C freezer) by adding 50 μl of 50% (v/v) glycerol to achieve a final concentration of 12.5% (v/v). In total, 15 Microtiter plates (source plates A–O) containing different compositions of monocultures of bacterial isolates were prepared for the high-throughput interaction assay. 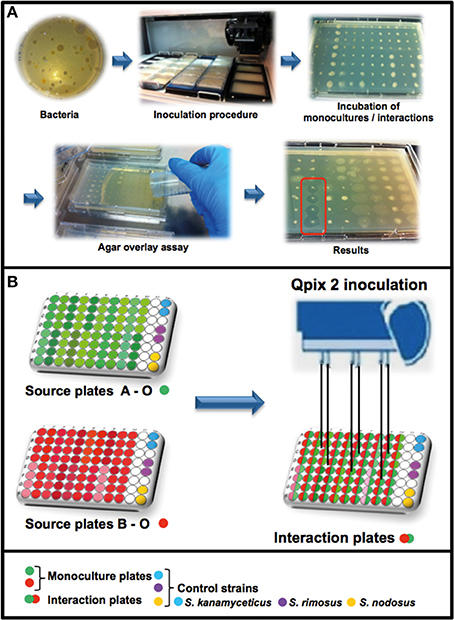 Figure 1. Workflow of the high-throughput interaction assay. (A) Overview of the antimicrobial screening: bacteria were inoculated with a Genetix Qpix 2 colony picking robot either in monoculture or in one-to-one interactions on OmniTray™ plates. For the detection of antimicrobial activity an agar overlay assay with two target organisms was performed on the fourth day of incubation. Antimicrobial activity was determined on the 5th day after overnight incubation at 37°C by screening for visible zones of inhibition (ZOI) in the upper agar layer. (B) Overview of the 96-well plates design and the inoculation procedure using the Genetix QPix2 colony picking robot.

A Genetix QPix 2 colony picking robot (Molecular Devices, UK Limited, Wokingham, United Kingdom) was used for the high-throughput interaction assay. The Genetix QPix 2 robot was mounted with a bacterial 96-pin picking head and programmed to replicate the source plates (96-well Microtiter plates) into the OmniTray™ plates (Figure 1). The source plates were replicated two times, one set of inoculated plates was removed from the robot and was used as control to estimate growth and antimicrobial activity of the monocultures. The remaining plates in the robot were used for the interaction assay by inoculating a second set of source-plates in various combinations. The second set of bacterial isolates was inoculated at the same position as the first set of bacteria, in this way the bacterial isolates had physical cell contact and could interact in one-to-one interactions (in quadruplicates). The inoculated OmniTray™ plates (monocultures and interaction plates) were incubated for 4 days at 24°C. In total, 146 bacterial isolates were combined with each other in various arrangements and tested in 2798 unique interactions for the production of antimicrobial compounds.

For detection of antimicrobial activity, an agar overlay assay was performed on the 4th day of incubation (Nkanga and Hagedorn, 1978). The two target organisms E. coli WA321 and S. aureus 533R4 were grown overnight in liquid LB broth at 37°C, 220 rpm. Fresh LB- agar (1.5% Merck Agar) was prepared, cooled down to ~45°C and the target organisms were added to a final OD600 of 0.002 corresponding to approximately 6 × 10∧5 CFU/mL (E. coli WA321) or 4 × 10∧5 CFU/mL (S. aureus 533R4) and mixed well. A volume of 15 mL liquid LB-agar containing the target organisms was poured over the OmniTray™ plates with the empty 11th row as the start position for pouring. After solidification of the overlay agar, the OmniTray™ plates were incubated overnight at 37°C. The next day (5th day), plates were examined for visible zones of inhibition (ZOI). Monocultures or mixed-cultures of the soil bacterial isolates were scored as positive for antibiotic production if at least two out of four replicates produced zones of inhibition (Figure 1A). The majority of activity reported (>55%) involved ≥3 out of 4 replicates. For confirmation of the high-throughput screening results, several of the antibiotic-triggering/suppressing interactions were tested outside the HTS setup (Figures S7, S8).

For identification of the bacterial isolates, PCRs were performed directly on colonies or with extracted genomic DNA. For genomic DNA extraction the QIAGEN QIAmp DNA Mini Kit (QIAGEN Benelux B.V., Venlo, The Netherlands cat# 51 304) was applied according to the manufacturer's manual. For the colony PCRs, a few colonies of each bacterial isolate were scraped from the plate with a disposable inoculation loop (VWR international B.V., Amsterdam, The Netherlands Cat# 50806-404) and re-suspended in 250 μl sterile MQ-water. The re-suspended bacterial cells were pulse vortexed and heated to 95°C for 5 min. Tubes were centrifuged for 3 min at 12,000×g and 1 μl supernatant from each bacterial isolate was applied in a 50 μl PCR- master mix (Promega Corp. Madison, USA cat# M7505). For 16S rRNA gene amplification, one of the two primer combinations was used: (1) forward primer pA (5′- AGA GTT TGA TCC TGG CTC AG -3′), reverse primer 1492r (5′- GRT ACC TTG TTA CGA CTT -3′), amplifying ~1492 bp from the 16S rRNA gene or (2) forward primer 27f (5′- AGA GTTT GAT CMT GGC TCAG -3′), reverse primer 1492r amplifying ~1465 bp from the 16S rRNA gene (Edwards et al., 1989; Lane, 1991) (modified). All PCR reactions were performed on a MJ Research Peltier thermal cycler 200 PCR machine (Harlow Scientific, Arlington, USA) with the following settings: initial cycle 95°C for 5 min. and 30 cycles of 94°C for 30 sec., 55°C for 30 sec. and 72°C for 1 min. After amplification, a volume of 5 μl of each PCR reaction was loaded on a 1.25 % (w/v) agarose gel and checked after electrophoresis for presence of PCR fragment. The PCR products were sent to MACROGEN (MACROGEN Europe, Amsterdam, The Netherlands) for sequencing.

Statistical analyses on frequencies for induction and/or suppression of antimicrobial compound production between the different Gram-groups were performed with http://math.hws.edu/javamath/ryan/ChiSquare.html using online chi square tests. Results of the chi-square test are shown in Tables S5, S6.

Phylogeny of the Tested Bacterial Isolates

Table 1. Frequencies of antimicrobial activity for the phyla included in this study. 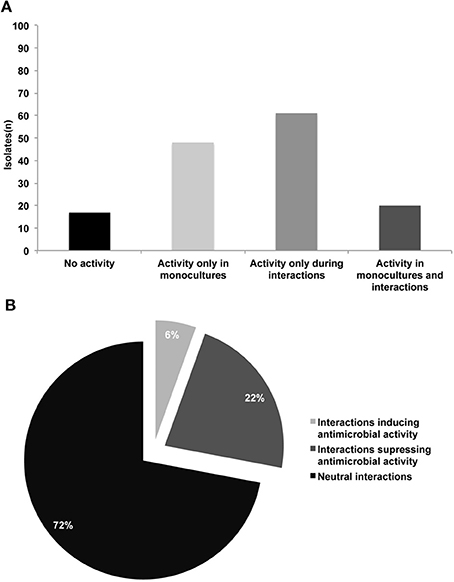 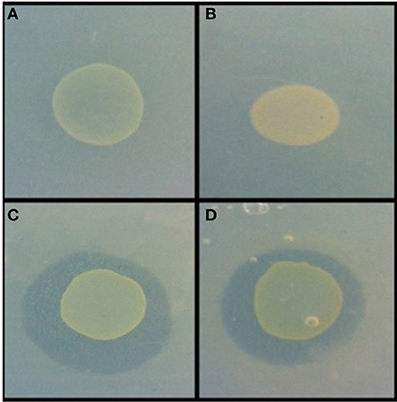 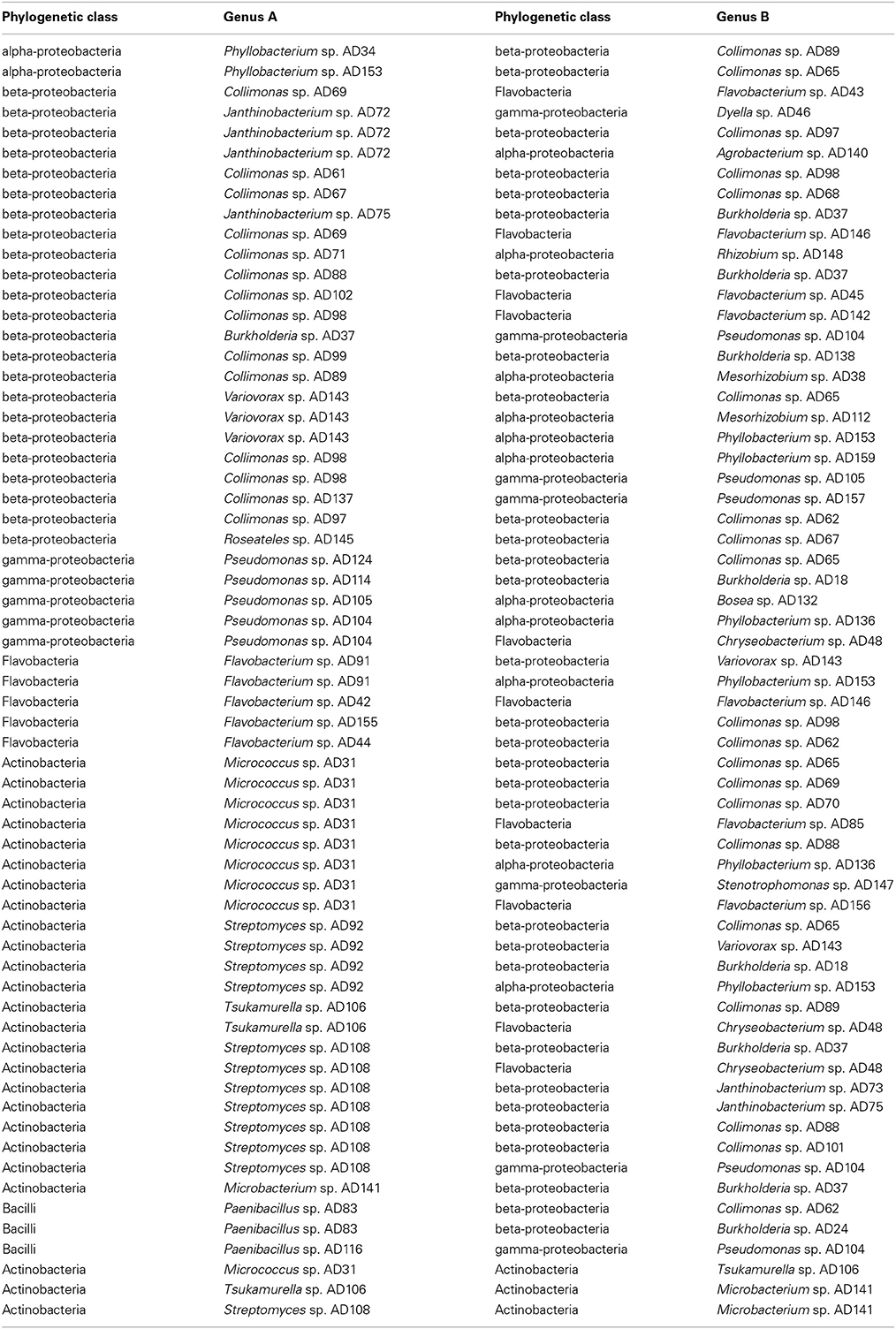 Interaction-mediated activity against both target organisms 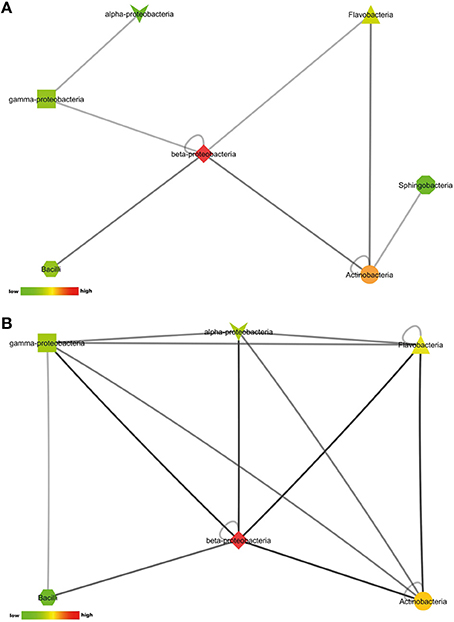 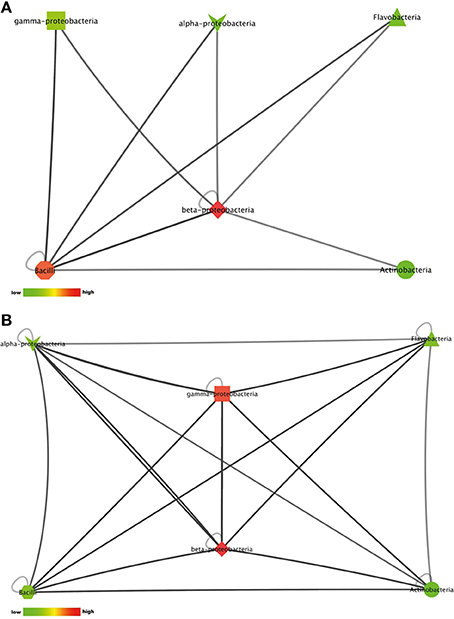 Recent studies indicated the importance of interspecific bacterial interactions for triggering antibiotic production (Garbeva et al., 2011a; Seyedsayamdost et al., 2012). However, the frequency of such events in natural bacterial communities is not known. Our study focused on a collection of bacterial isolates from similar soil habitats, i.e., sandy soils covered by vegetation patches consisting of sand sedge (C. arenaria). Hence, the chance that actual interactions between these bacteria can occur in their natural habitat seems plausible. Induction of antibiotic production in pair-wise combinations was not found to be an abundant phenomenon as it occurred in ~6% of all interactions studied. Yet, 42% of the bacterial isolates were present in combinations that showed activity against at least one of the target organisms, whereas they did not show activity in monocultures. This seems to indicate that the composition of the interacting pairs is an important factor in the induction of antibiotic production.

The observed frequency of interaction-mediated induction of antibiotic production exemplifies that a high-throughput screening as the one developed here can be an important strategy for the discovery of novel cryptic antibiotics. Many pair-wise combinations have to be screened and, subsequently, interesting pairs can be studied in more detail with respect to elucidate the mechanisms underlying the induction, signals and genes involved in the production of the antibiotic compounds (Garbeva et al., 2011a; Traxler et al., 2013). Interactions that induced antimicrobial activity often involved combinations of phylogenetically different bacteria or interactions among beta-Proteobacteria and among Actinobacteria. The present work included several bacterial genera (e.g., Streptomyces, Burkholderia, Janthinobacterium and Paenibacillus) for which multiple antibiotics have been described previously (Pantanella et al., 2007; Berdy, 2012; Cornforth and Foster, 2013; Debois et al., 2013; Zhu, 2014). Hence, there is the possibility that our screening method will reveal bacteria that produce known antibiotics but only during co-cultivation.

Depending on the target organism there was a clear difference in antimicrobial activity with higher activity against the Gram-positive than against the Gram-negative organism (in both monocultures and interactions), which is in line with previous reports that Gram-positive bacteria are generally more sensitive to antibiotics (Rice, 2006; Giske et al., 2008; Zhu, 2014).

Soil and rhizosphere are environments where bacteria evolved the ability to produce antibiotics as competitive tool for their survival (Hibbing et al., 2010). Root-associated bacteria with antimicrobial potential play an important role in plant health (Raaijmakers and Mazzola, 2012) and understanding microbial interactions affecting antimicrobial activity may be helpful in understanding the functions and mechanisms of microbial communities contributing to plant protection. The knowledge obtained here could help in selecting the right players in microbial consortia and as suggested by Mendes (Mendes et al., 2013) to design “a minimal microbiome” that comprises a set of microorganisms needed to fulfill a specific ecosystem services like e.g., disease suppression.

In conclusion, the high-throughput screening method developed in this work allows for a fast detection of interaction-mediated induction or suppression of antibiotic production in soil bacteria. Such screening also allows for a better insight into different interference competitive strategies that are operational in microbial communities. This knowledge in turn can be used for construction of synthetic microbial communities (Shong et al., 2012; De Roy et al., 2013; Grosskopf and Soyer, 2014).

This work is supported by the BE-Basic Foundation. Paolina Garbeva is financed by The Netherlands Organization for Scientific Research (NWO) MEERVOUD personal grant (836.09.004). This is publication 5682 of the NIOO-KNAW.

The Supplementary Material for this article can be found online at: http://www.frontiersin.org/journal/10.3389/fmicb.2014.00567/abstract

Copyright © 2014 Tyc, van den Berg, Gerards, van Veen, Raaijmakers, de Boer and Garbeva. This is an open-access article distributed under the terms of the Creative Commons Attribution License (CC BY). The use, distribution or reproduction in other forums is permitted, provided the original author(s) or licensor are credited and that the original publication in this journal is cited, in accordance with accepted academic practice. No use, distribution or reproduction is permitted which does not comply with these terms.