Nitrobenzoates (NBs) including 2-nitrobenzoate (2NB), 3-nitrobenzoate (3NB), and 4-nitrobenzoate (4NB) are used in the synthesis of chemicals, pharmaceuticals and dyes (Zylstra et al., 2000). NBs are white to light yellow colored crystals, which are insoluble in water, but soluble in alcohol. These compounds are toxic to living beings because of their genotoxicity, mutagenicity, and hematologic toxicity (Sundvall et al., 1984; NTP, 1994; Grummt et al., 2006).

In past, several bacteria have been reported for their ability to degrade various nitroaromatics in soil, which is prerequisite for bio-augmentation of contaminated soil (Arora et al., 2014a). Despite the fact that NBs are wide spread in soil, there is no single strain of NBs-degrading bacterium that could degrade NBs in soil. Arthrobacter sp. SPG has also been reported for its ability to degrade nitroaromatics in soil (Arora et al., 2014b); therefore, the potential of Arthrobacter sp. SPG to degrade 2NB in soil has also investigated using soil microcosms in this study.

A bacterium, Arthrobacter sp. SPG used in this study was previously isolated from a pesticide contaminated site of India and able to utilize 2NB as its sole source of carbon and energy (Arora, 2012). Strain SPG was grown on 250 ml Erlenmeyer flasks on 100 ml minimal medium supplemented with 0.5 mM 2NB. The minimal media was composed of Na2HPO4 (4 g/L), KH2PO4 (2 g/L), (NH4)2SO4 (0.8 g/L), MgSO4.7H2O (0.8 g/L), and trace element solution. The trace element solution was prepared freshly as described previously (Arora and Jain, 2012). The pH of minimal medium was adjusted at 7.0 pH using 5 M NaOH and medium was autoclaved at 15 psi for 20 min. The autoclaved minimal medium was allowed to cool at room temperature and the filter sterilized 2NB was added into the medium at the concentration of 0.5 mM. The stock solution of 2NB was prepared in methanol at the concentration of 100 mM. The incubation was carried out under shaking conditions (200 rpm) at ambient temperature. Bacterial cultures (samples, 3 ml) were collected at every 4 h up to the 48 h for analysis of bacterial growth, 2NB depletion, nitrite release and ammonia release. The bacterial growth was measured in spectrophotometer by an increase in optical density (OD) at 600 nm. To monitor 2NB depletion and detection of the nitrite and ammonia ions, samples (2 ml) collected at regular intervals were centrifuged at 10000 rpm for 5 min and supernatants were used for further analysis. 2NB depletion was monitored with decrease in absorbance at 268 nm using UV-visible spectrophotometer (Perkin Elmer; Chauhan and Jain, 2000). The residual amounts was calculated from a standard curve prepared using authentic 2NB. The nitrite and ammonia releases were monitored by the methods as described previously (Arora and Jain, 2012).

To identify the metabolite of the degradation of 2NB, strain SPG was grown on 1 L Erlenmeyer flask containing 500 ml minimal media and 0.5 mM 2NB as its sole source of carbon energy. Samples (50 ml) were collected at regular intervals (0, 12, 24, and 36 h) and centrifuged at 10000 rpm for 15 min. The supernatants were extracted with ethyl acetate as described previously (Arora and Jain, 2012). The extracted samples were dissolved in 20 μl methanol, and subjected to high performance liquid chromatography (HPLC) and gas chromatography–mass spectrometry (GC–MS) for analysis.

A Waters 600 model HPLC system was used for this study. This system was equipped with a photodiode array detector system. Separation was performed on C18 reverse-phase silica column with a solvent [methanol: water (20:80, v/v) containing 1% glacial acetic acid] at flow rate of 1.0 ml/min.

The enzyme, 2NB-2-monooxygenase catalyzed conversion of 2NB to salicylate with release of nitrite ions. The enzyme activity was determined by measuring nitrite ions released from 2NB upon incubation with cell-free lysate containing 50 mM Tris-HCl buffer (pH 8.0), 0.2 mM NADH (nicotinamide adenine dinucleotide, reduced form) 0.08 mM FAD (flavin adenine dinucleotide), 1 mM MgSO4, 20 mg of cell-free lysate, and 500 μM 2NB in a total reaction volume of 5 ml. The reaction was initiated by the addition of 2NB in the reaction mixture and the sample (500 μl) was collected after 15 min of incubation and subjected to quantitation of the nitrite release in reaction mixture. The remaining sample was extracted with ethyl acetate and analyzed by GC–MS for identification of final product. The cell free lysate was prepared as described previously using 2NB (Arora and Jain, 2012).

Catechol-1,2-dioxygenase activity was determined spectrophotometrically by measuring the increase of absorbance at 260 nm due to the cleavage of catechol into cis,cis-muconate. The reaction mixture contained 50 μmol of 50 mM Tris-HCl (pH 7.4) buffer, and 200 μM of catechol in a total volume of 1 ml. After addition of crude extracts, the increase at 260 nm (corresponding to the formation of cis,cis-muconate) was measured in a silica cuvette with a 1.0-cm light path at spectrophotometer.

Microcosm studies were carried out to monitor the 2NB degradation in soil by Arthrobacter sp. SPG. Soil (pH 7.2, 2.4% organic matter content and 30% moisture content) was collected from the University campus. Microcosms were prepared in 100 ml beakers containing 20 g soil artificially contaminated with 100 ppm 2NB. Four sets of experiments were performed in this study: (a) sterile soil microcosm inoculated with strain SPG at ∼2 × 108 cells colony-forming units (CFUs) g-1 soil; (b) non-sterile soil microcosm inoculated with strain SPG at ∼2 × 108 cells CFUs g-1 soil; (c) control sterile microcosm without bacterial inoculation; and (d) Control non-sterile microcosm without bacterial inoculation. All beakers covered with aluminum foil were maintained under sterile conditions at 30°C for 10 days. Distilled water (5–10 ml) was added at regular interval to maintain the water contents in soil. Soil samples (1 g) were removed at regular intervals up to 12 days and extracted as described previously (Arora and Jain, 2012). The extracted samples were analyzed by HPLC as described above. All experiments were carried out in triplicate and under optimum conditions, which include inoculum size (2 × 108 CFU g-1 soil), pH (7.0), temperature (30°C), and 2NB concentration (100 ppm).

The growth of strain SPG was monitored in minimal medium containing 0.5 mM 2NB as its sole source of carbon and energy. Bacterial growth was directly correlated with 2NB degradation by Arthrobacter sp. SPG. Neither bacterial growth nor 2NB degradation was observed at initial 8 h when the bacterial cells were in lag phase of growth cycle (Figures 1A,B). Cells of strain SPG grew after 8 h of the incubation and degraded almost 75% 2NB in 28 h of incubation. The complete degradation of 2NB has achieved after the incubation of 36 h when the bacterial cells reached at stationary phase. The stoichiometric amounts of nitrite ions (0.5 mM) were detected during the degradation of 2NB by Arthrobacter sp. SPG (Figure 1C). 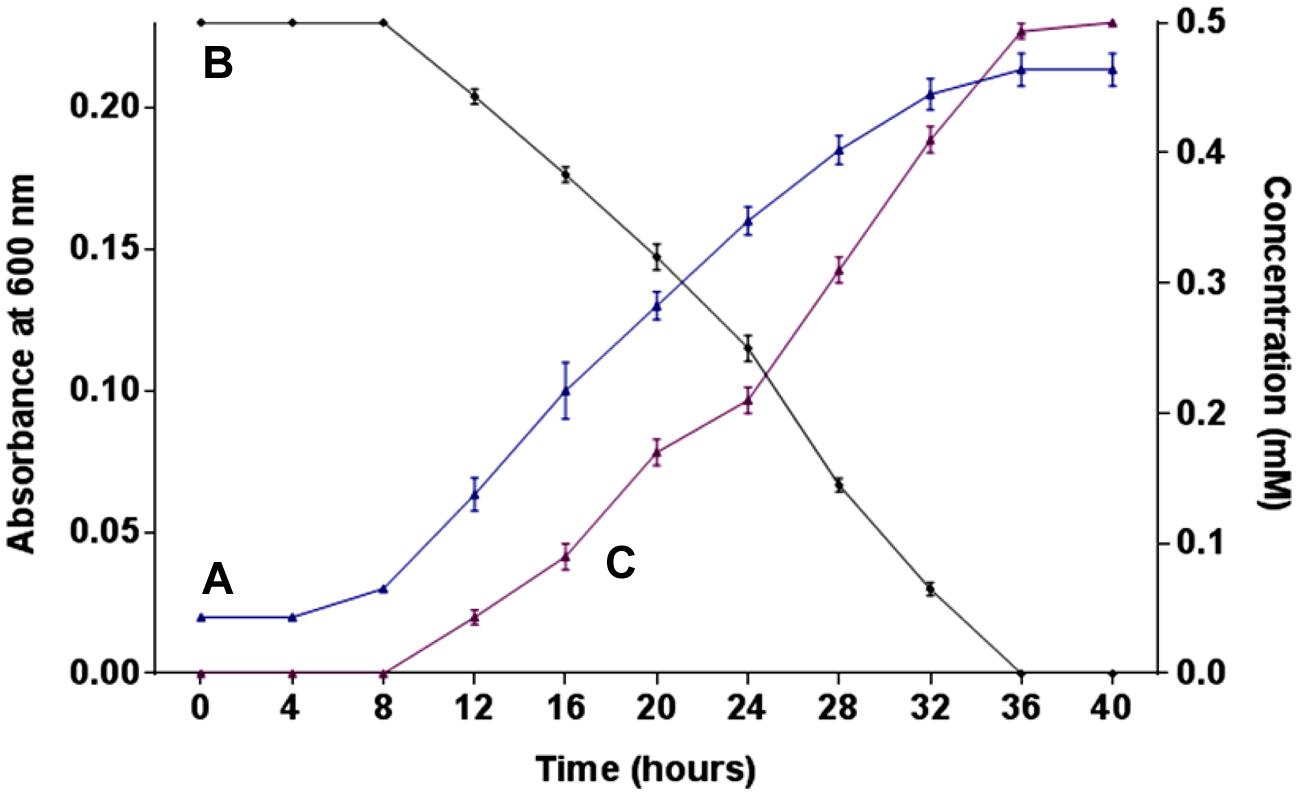 High performance liquid chromatography studies confirmed the complete degradation of the 2NB within 36 h. In the sample of 12 h, only peak of 2NB was detected (Figure 2A), while peaks of two metabolites in addition to 2NB peak were detected in sample collected at 24 h (Figure 2B). The retention time of the metabolite I and II corresponded to those of authentic standards of the salicylate and catechol. In the sample of 36 h, neither peak of the 2NB or any metabolite was detected suggesting the complete utilization of 2NB. To identify the metabolites, GC–MS analysis was carried out. The mass spectra of metabolite I had a molecular ion peak at m/z 138 and other major fragments were observed at m/z 120 and 119 (Figure 3A). The mass spectra of metabolite II contained a main peak at m/z 110 and other fragments were observed at m/z 92, 81, and 64 (Figure 3B). On the basis of the NIST (National Institute of Standards and Technology) library match, metabolites I and II were identified as salicylate and catechol, respectively. 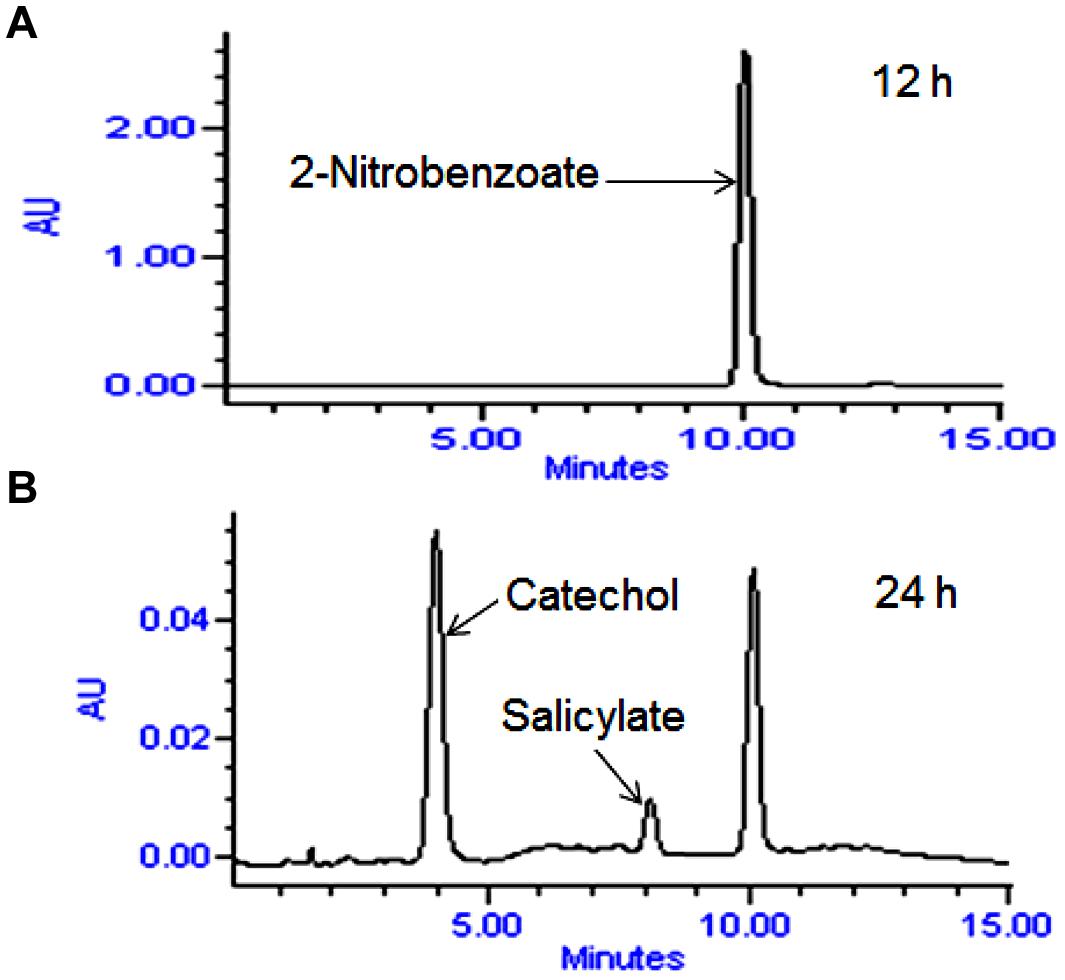 FIGURE 2. High performance liquid chromatography (HPLC) elution profiles of the samples during the 2NB degradation. (A) 12 h sample showing only the peak of 2NB; and (B) 24 h sample showing the peaks of two metabolites along with the 2NB. 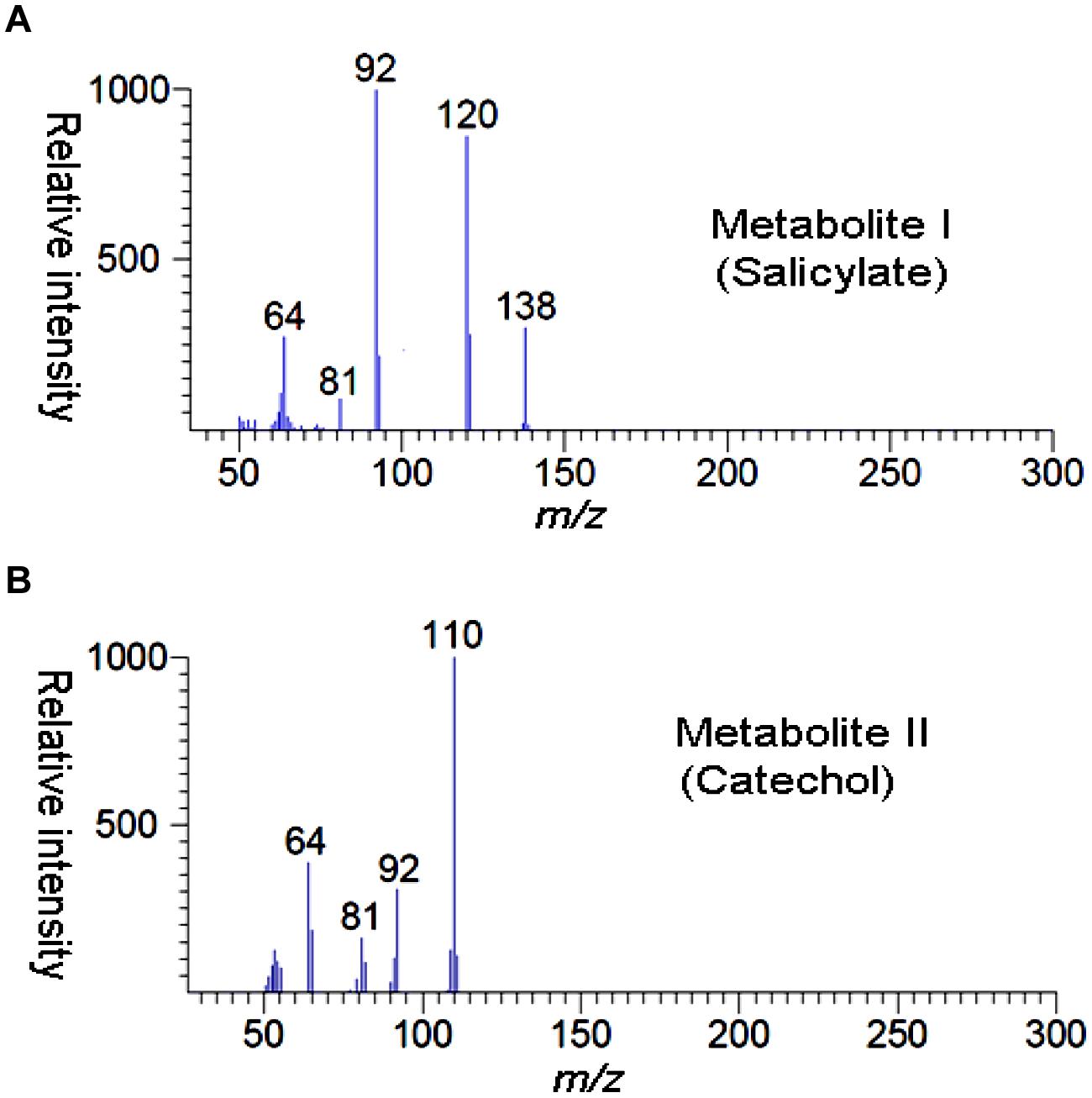 In the crude extracts of the 2NB-induced cells of strain SPG, we have detected enzyme activities for 2NB-2-monooxygenase, salicylate hydroxylase, and catechol-1,2-dioxygenase. The activity of 2NB-2-monoxygenase was confirmed by detection of salicylate using GC–MS and release of nitrite ions in reaction mixture. The salicylate hydroxylase activity was confirmed by the detection of catechol using a spectrophotometer. The catechol-1, 2-dioxygenase activity was confirmed spectrophotometrically with the increase in absorbance at 260 nm (corresponding to formation of cis,cis-muconate). 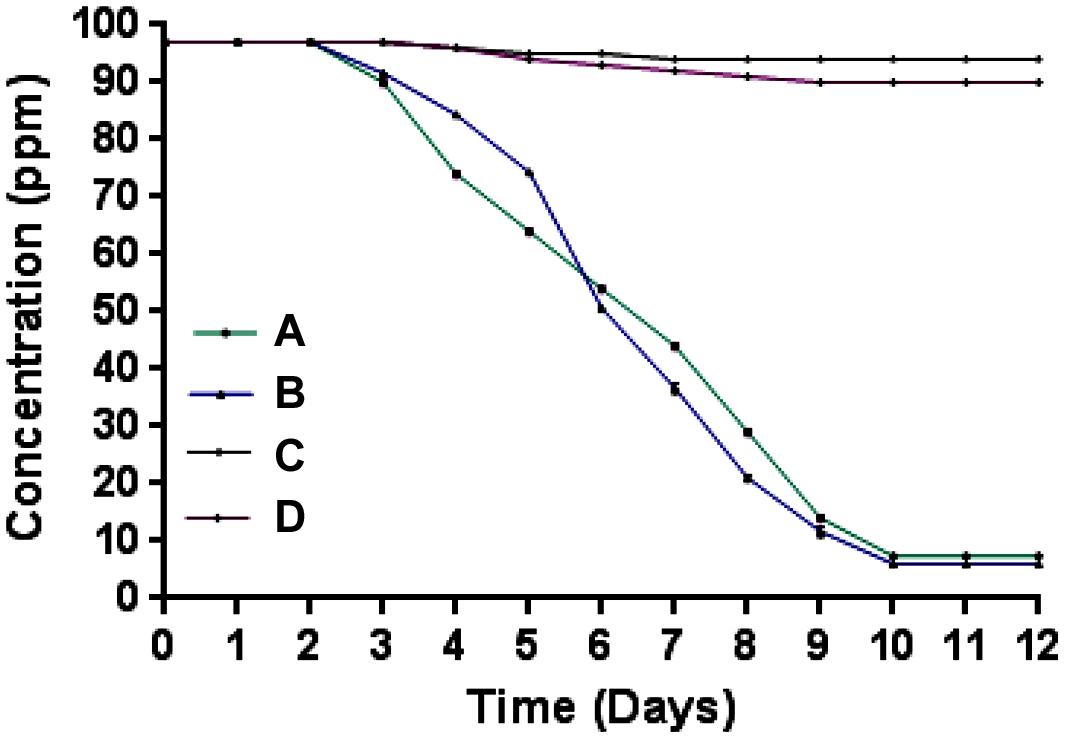 Arthrobacter sp. SPG utilizes 2NB as its sole source of carbon and energy and degrades it with stoichiometric release of nitrite ions. Initially, a 2NB-monooxygenase catalyzes conversion of 2NB to salicylate with release of nitrite ions. The next step, catalyzed by salicylate hydroxylase, involves conversion of salicylate to catechol, which undergoes ortho ring cleavage by a catechol-1,2-dioxygenase to produce cis,cis-muconic acid (Figure 5).

Arthrobacter sp. SPG has also potential to degrade 2NB in soil. Strain SPG efficiently degrades 2NB in sterile as well as non-sterile soil. This strain may be used for bioremediation of 2NB-contaminated sites.

Arthrobacter sp. SPG utilized 2NB as its sole source of carbon and energy and degraded it in broth culture as well as from soil (sterile and non-sterile) under laboratory conditions. The present study clearly indicates that strain SPG degraded 2NB via salicylate and catechol with potential to be used in bioremediation of 2NB-contaminated sites.

Copyright © 2015 Arora and Sharma. This is an open-access article distributed under the terms of the Creative Commons Attribution License (CC BY). The use, distribution or reproduction in other forums is permitted, provided the original author(s) or licensor are credited and that the original publication in this journal is cited, in accordance with accepted academic practice. No use, distribution or reproduction is permitted which does not comply with these terms.

New and Emerging Trends of Biotechnology in Bioremediation