Water hyacinth was used as substrate for bioethanol production in the present study. Combination of acid pretreatment and enzymatic hydrolysis was the most effective process for sugar production that resulted in the production of 402.93 mg reducing sugar at optimal condition. A regression model was built to optimize the fermentation factors according to response surface method in saccharification and fermentation (SSF) process. The optimized condition for ethanol production by SSF process was fermented at 38.87°C in 81.87 h when inoculated with 6.11 ml yeast, where 1.291 g/L bioethanol was produced. Meanwhile, 1.289 g/L ethanol was produced during experimentation, which showed reliability of presented regression model in this research. The optimization method discussed in the present study leading to relatively high bioethanol production could provide a promising way for Alien Invasive Species with high cellulose content.

Bioethanol, as a clean, safe and renewable resource, is considered as a potential alternative to fossil fuels (Rezania et al., 2015). However, it is mainly produced from either starch- or sugar-rich crops that may raise land competition between food production and biomass energy utilization, and can lead to deforestation (Zhao and Xia, 2010; Das et al., 2015). Hence, lignocellulose is gradually considered as more attractive because of its low cost and easy availability (Valentine et al., 2012; Bayrakci and Koçar, 2014).

Water hyacinth (Eichornia crassipes), which is originated from Amazon basin (Barrett, 1989), is listed as one of the world's most invasive and recalcitrant weeds because of its availability in large quantities, extraordinary adaptive ability, and remarkable growth rate (Hu et al., 2015). It grows at an extreme rapid rate and produce almost 2 tons of biomass per acre and its population doubles every 5–15 days (Craft et al., 2003). Water hyacinth is usually blamed for depleting nutrients and oxygen from water bodies, increasing evapotranspiration, and reducing biodiversity, which could influence fishing, shipping, irrigation, and destroy aquatic eco-system (Malik, 2007; Guerrero-Coronilla et al., 2015). This species was brought to mainland China in the 1930s. With its extremely high growth rate, this floating plant has infested many aquatic systems in 19 provinces of China (Xia et al., 2013). Moreover, water hyacinth is considered as an attractive raw material for the bioenergy production including bioethanol, hydrogen, and biochar in many tropical regions of the world among various types of lignocellulosic substances (Masto et al., 2013; Buller et al., 2015; Jiu et al., 2015; Zhang et al., 2015).

Due to its abundant availability and high carbohydrate contents, water hyacinth highly satisfies the requirements as a potential substrate for bioethanol production (Ganguly et al., 2012; Rezania et al., 2015). The dry biomass of water hyacinth mainly comprises low lignin (7–26%) and high amount of cellulose (18–31%) and hemicellulose (18–43%), which can be easily hydrolyzed to reducing sugars and then fermented to bioethanol by effective yeasts (Bergier et al., 2012). However, there are many problems hindering the effective enzymatic hydrolysis. One of these problems is the lignin seal that prevents penetration by degrading enzymes (Taniguichi et al., 2005). Thus, many researchers tried to seek effective pretreatment methods to break the lignin seal (Forrest et al., 2010; Ma et al., 2010; Gao et al., 2013; Yan et al., 2015). Another bottleneck is the feedback inhibition of cellobiose on fermentation process after hydrolysis during bioethanol production (Guan et al., 2013; Ha et al., 2013; Cheng et al., 2015a,b). The most effective method to solve the feedback inhibition problem is simultaneous saccharification and fermentation (SSF), a process in which enzymatic process hydrolyzes lignocelluloses to sugars and ferments to bioethanol simultaneously, being already used in many lignocelluloses fermentation systems (Huang et al., 2013; Soares and Gouveia, 2013). However, there is no detail report on SSF process using water hyacinth as substrate.

In the present study, water hyacinth was collected from wastewater and pretreated. The major factors affecting the efficiency of SSF process were analyzed by response surface method (RSM) that provided an optimal fermentation parameter for bioethanol production by water hyacinth.

Water hyacinth was obtained from Huangpu River, Minhang District, Shanghai, China. It was washed three times with tap water to remove extraneous matter and roots, and then smashed by grinder below 40 meshes for further use.

Cellulase extracted from Trichoderma viride was bought from Sinopharm Chemical Reagent Co., Ltd, Shanghai. The activity of cellulase is 15000 U/g.

Saccharomyces cerevisiae was preserved in Shanghai Key Lab for Urban Ecological Processes and Eco-Restoration at East China Normal University (SHUES, ECNU), Shanghai. To prepare the yeast inoculum, one loop of S. cerevisiae spores was suspended in fluid enrichment medium (10 g/L yeast extract, 20 g/L peptone and 20 g/L glucose) for 24 h. The exponential inoculum was centrifuged at 4000 r/min for 5 min, followed by washing the precipitate by deionized water. After calculating dry weight of the yeast, 2 g/L yeast inoculum was prepared finally.

The solid residue after pretreatment was collected by filtration and washed extensively with distilled water until neutral pH. Subsequently, this pretreated water hyacinth was dried in the oven at 70°C to maintain a constant weight to be used as the substrate for enzymatic hydrolysis.

Cellulase dosage, hydrolysis temperature and time were selected as three factors for single factor experiment. The reducing sugars in hydrolysates were detected to determine an optimum enzymatic hydrolysis process.

One gram smashed water hyacinth sample was firstly pretreated by acid (1% H2SO4) at the optimal condition followed by alkali (6 mol/L NaOH) was used to regulate pH value to 5.3. After that the mixture was autoclaved at 121°C for 20 min, and 0.05 g cellulase with 0.05 g CaCl2 were added to the pretreated sample to hydrolyze. Meanwhile, yeast inoculum was added into pretreated sample according to the experimental design along with 2.0 g/L yeast extract, 0.2 g/L (NH4)2HPO4 and 0.02 g/L MgSO4. Nitrogen was aerated to exclude air in the system, and SSF was carried out at constant temperature shaker with the speed of 120 rpm. After SSF process, the fermented samples were centrifuged at 5000 rpm for 8 min and supernatant was used for bioethanol determination.

The moisture content of water hyacinth was detected by oven drying method at 105°C for three times, and the average value was calculated ultimately. Cellulose, hemicelluloses and lignin contents in water hyacinth were determined by the methods of Goering and Van soest (1970). The DNS method was used for the measurement of total reducing sugar contents (Miller, 1959).

The bioethanol production during fermentation was measured using headspace sampling Gas Chromatography (GC, Agilent 7890A) method. HS-9A was selected as heated static headspace. The treated samples were examined by GC on a HP-5MS capillary column (30 m × 0.25 mm × 0.25 μm) with FID detector. Nitrogen was used as carrier gas. All the experiments and sample injection were performed in triplicates, and the average values were represented and used ultimately. The conditions were as follow:

Pretreatment and Hydrolysis of Water Hyacinth

The surplus residue part of water hyacinth was hydrolyzed by cellulase after pretreatment. Various factors that influence cellulase hydrolysis, including cellulase dosage, enzyme temperature and reaction time, were optimized by single factor experiment (Figures 1A–C). The result showed that the yield of reducing sugar could reach 205.33 mg at 45°C at the end of 96 h when 0.05 g cellulase was added. Thus, totally 402.93 mg (197.60 mg in hydrolysates and 205.33 mg by residue hydrolysis) reducing sugar could be produced at the optimal condition. 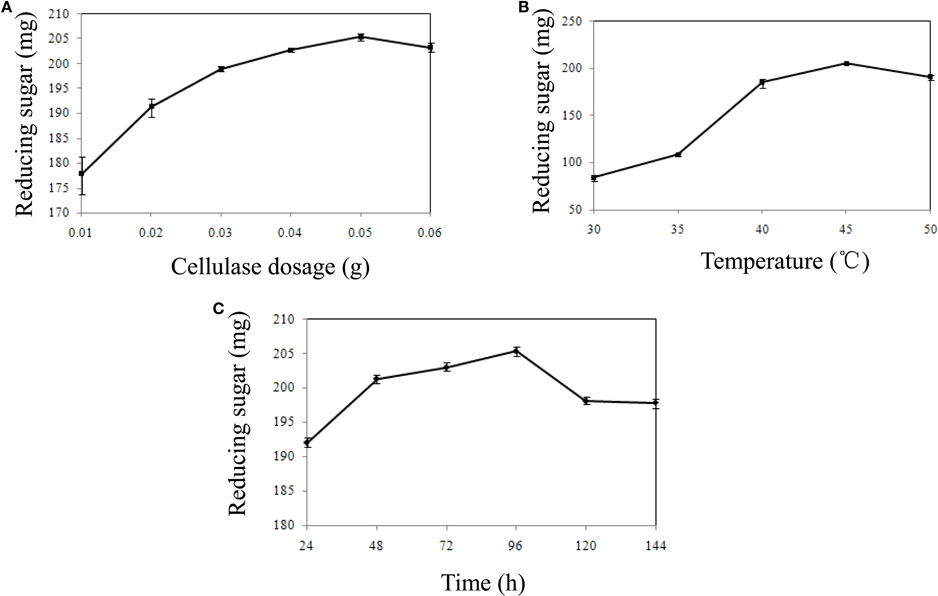 The Box-Behnken design and experimental results were listed in Table 2. Variance test and regression were analyzed by Design-expert software after manual operation, which was shown in Table 3. It was showed that the regression model was highly significant (P < 0.05) and the regression equation obtained in the present study could predict the response value effectively. 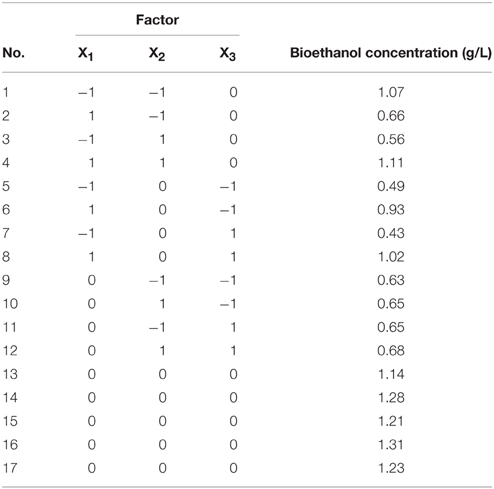 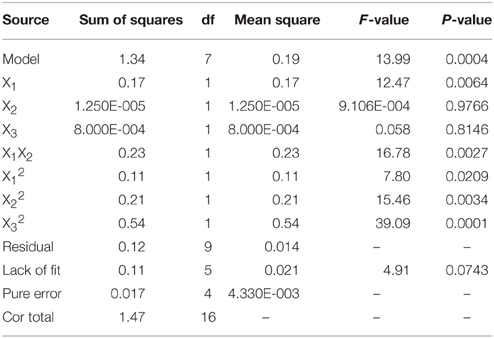 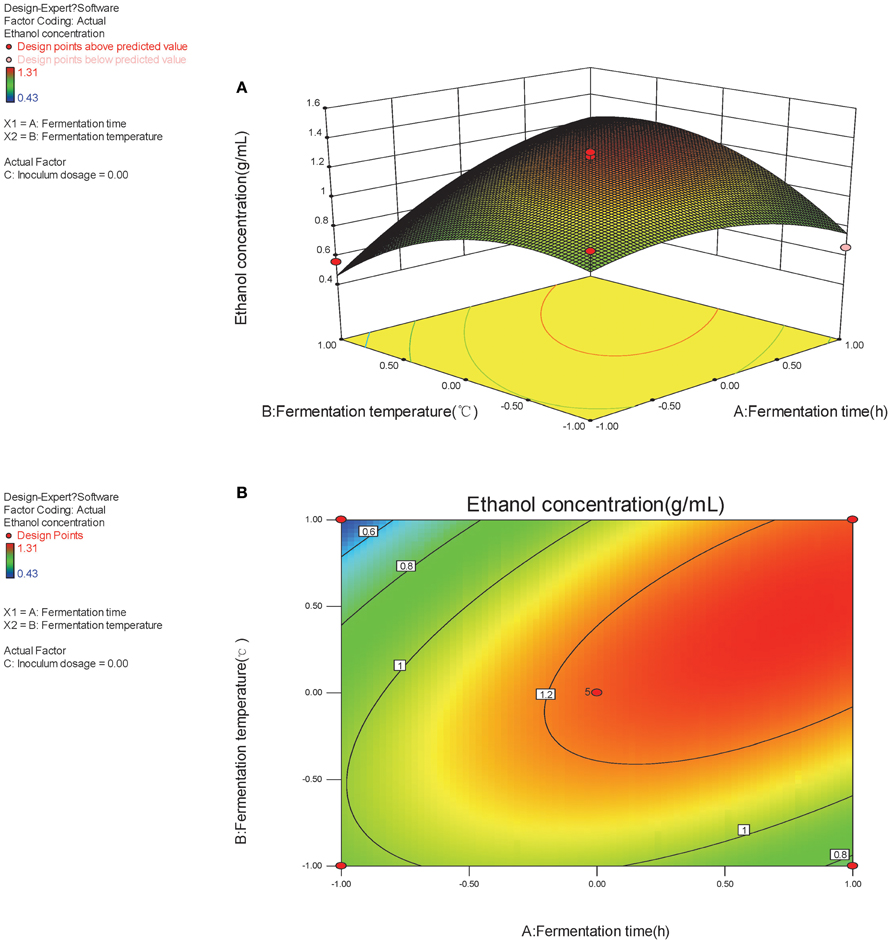 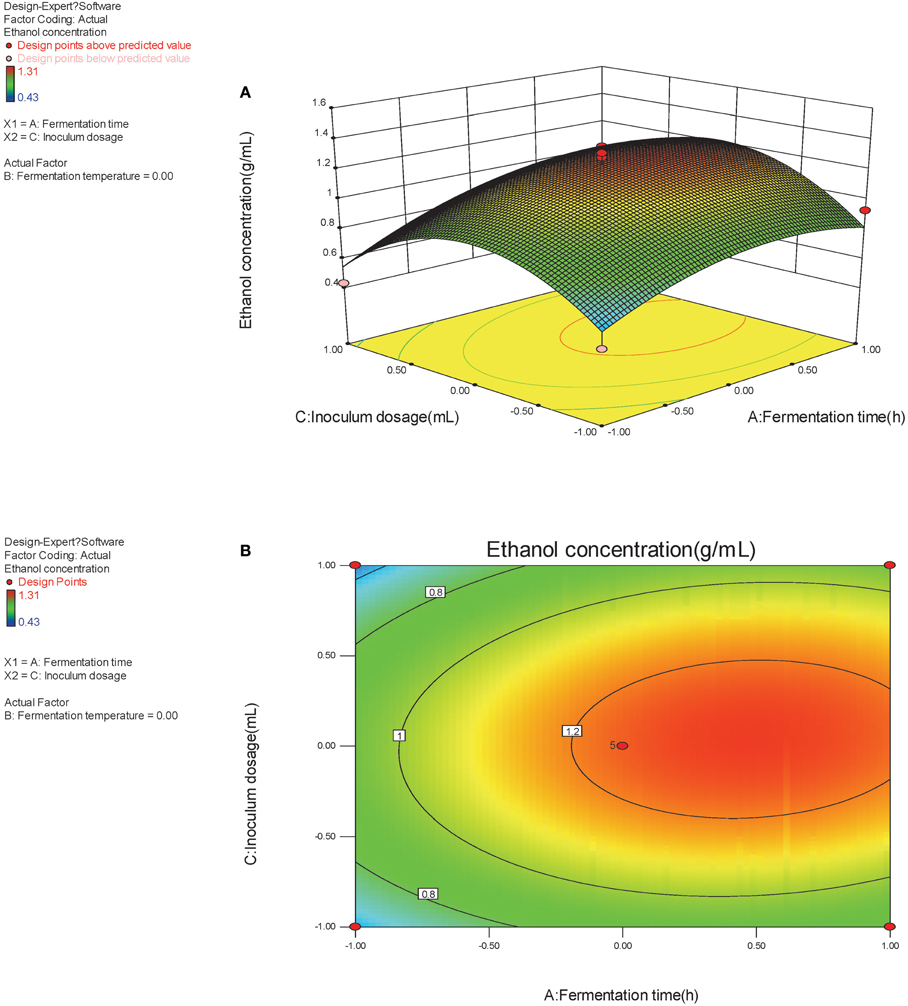 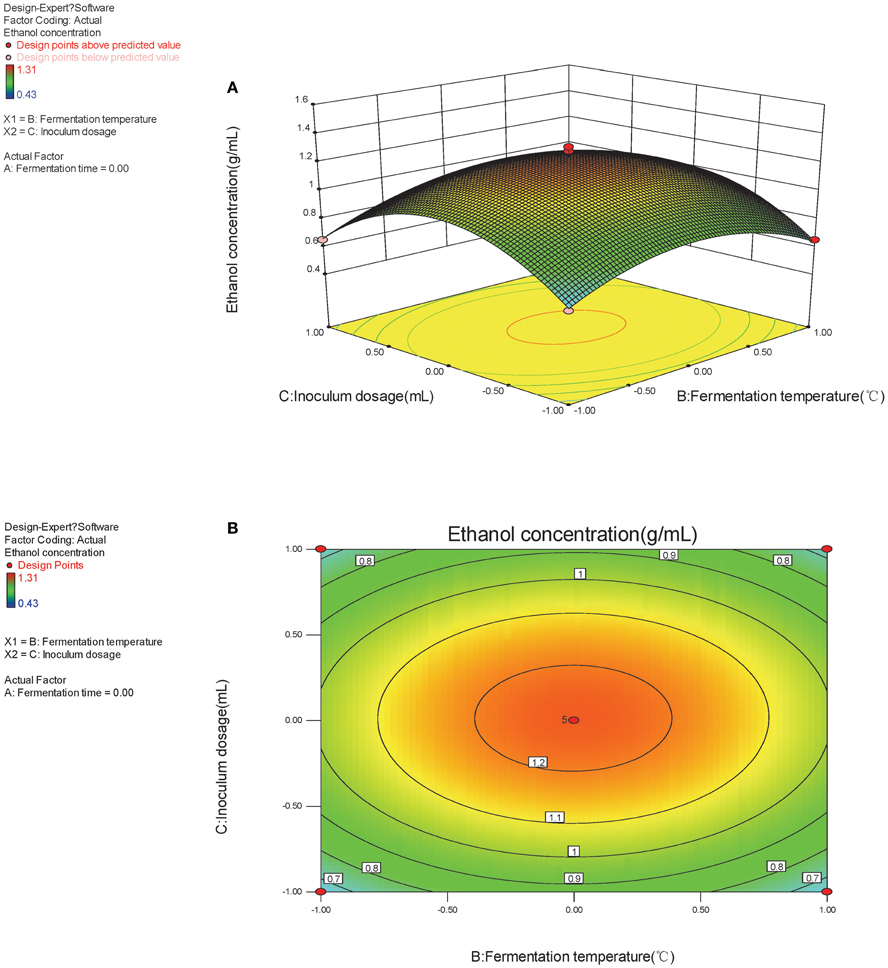 Based on our results, the whole plant of water hyacinth possesses the highest cellulose content compared to stem and leaf after removing its rotten part. Therefore, it was selected as substrate for ethanol production, which could make full use of the whole plant.

Cellulase usage is a huge cost in bioethanol production process. Large amounts of cellulases are needed to hasten the hydrolysis process, thereby increasing the cost of the whole processing. In addition, enzyme recycling becomes difficult because of the adsorption of cellulases to residual cellulosic materials (Zhang et al., 2009). Thus, many factors, such as cellulase dosage, enzyme temperature and reaction time, are urgently necessary to be optimized to reduce the cost of bioethanol production. After optimization of such important parameters in the present study, 402.93 mg (197.60 mg in hydrolysates, and 205.33 mg by residue hydrolysis) reducing sugar was produced. The theoretical yield of reducing sugar that produced by water hyacinth was 521.30 mg, counted by Hu's method (Hu and Wen, 2008). Therefore, the real yield of achieved reducing sugar was 77.29% of the theoretical yield by our optimized technique, and is more effective method compared to other reports, which only produce reducing sugars from the hydrolysates (Ma et al., 2010; Yan et al., 2015). However, pentose (such as xylose) sugar could not be digested using S. cerevisiae and remained unchanged during fermentation (Zhang and Cai, 2008). Hence, exploring a hexose-pentose co-fermentation system by genetic engineering method could be a promising way to improve bioethanol production by cellulosic materials.

According to our regression model, the ethanol yield could achieve 1.291 g/L at the optimum condition, while 1.289 g/L ethanol was produced by our real experiment at this condition, which is very close to the predicted model. These results showed the reliability of presented regression model. In terms of factors, which influenced SSF process, fermentation temperature (X1) was the most important compared to other factors, as temperature is crucial for growth and activity of cellulase and S. cerevisiae. Meanwhile, bioethanol production possessed a relatively high value that proved a fact that the SSF process is more effective than SSF separately (Wang et al., 2013; Asada et al., 2015; Saha et al., 2015). Although SSF could solve the feedback inhibition problem of cellobiose on fermentation process, it has some drawbacks, such as gap for the optimum temperature and pH conditions between cellulase and S. cerevisiae. Thus, a pivotal research field is required to develop and regulate a suitable condition for microorganisms in SSF process.

In addition, compared to other cellulosic materials, the moisture content in water hyacinth is much higher that could be solved during bioethanol production by fermentation of water hyacinth in future (Mishima et al., 2008). Further, there are some inhibitors (furfural, furan, phenols, etc.) in the hydrolysates that could destroy the fermentation process (Kalyani et al., 2012; Moreno et al., 2012; Wang et al., 2014), and an effective method to minimize the inhibitors production is urgently required in the future study. Moreover, the solid loading in enzymatic hydrolysis and SSF process might be another important factor, which need to be optimized in our future work.

As a conventional invasive weed, water hyacinth proved its feasibility for bioethanol energy production. In our experiment, 402.93 mg reducing sugar and 1.289 g/L bioethanol were achieved using water hyacinth substrate in Simultaneous SSF process after being optimized by RSM. This relatively high bioethanol production indicates that water hyacinth is a promising plant in research and development of sustainable energy.

Copyright © 2016 Zhang, Weng, Huang, Achal and Wang. This is an open-access article distributed under the terms of the Creative Commons Attribution License (CC BY). The use, distribution or reproduction in other forums is permitted, provided the original author(s) or licensor are credited and that the original publication in this journal is cited, in accordance with accepted academic practice. No use, distribution or reproduction is permitted which does not comply with these terms.

New and Emerging Trends of Biotechnology in Bioremediation