Isolation and Characterization of a Novel Cold-Adapted Esterase, MtEst45, from Microbulbifer thermotolerans DAU221

A novel esterase, MtEst45, was isolated from a fosmid genomic library of Microbulbifer thermotolerans DAU221. The encoding gene is predicted to have a mass of 45,564 Da and encodes 495 amino acids, excluding a 21 amino acid signal peptide. MtEst45 showed a low amino acid identity (approximately 23–24%) compared with other lipolytic enzymes belonging to Family III, a closely related bacterial lipolytic enzyme family. MtEst45 also showed a conserved GXSXG motif, G131IS133YG135, which was reported as active site of known lipolytic enzymes, and the putative catalytic triad composed of D237 and H265. Because these mutants of MtEst45, which was S133A, D237N, and H265L, had no activity, these catalytic triad is deemed essential for the enzyme catalysis. MtEst45 was overexpressed in Escherichia coli BL21 (DE3) and purified via His-tag affinity chromatography. The optimal pH and temperature of MtEst45 were estimated to be 8.17 and 46.27°C by response surface methodology, respectively. Additionally, MtEst45 was also active between 1 and 15°C. The optimal hydrolysis substrate for MtEst45 among p-nitrophenyl esters (C2–C18) was p-nitrophenyl butyrate, and the Km and Vmax values were 0.0998 mM and 550 μmol/min/mg of protein, respectively. MtEst45 was strongly inhibited by Hg2+, Zn2+, and Cu2+ ions; by phenylmethanesulfonyl fluoride; and by β-mercaptoethanol. Ca2+ did not affect the enzyme's activity. These biochemical properties, sequence identity, and phylogenetic analysis suggest that MtEst45 represents a novel and valuable bacterial lipolytic enzyme family and is useful for biotechnological applications.

Lipolytic enzymes, primarily esterase and lipases, belong to the α/β hydrolase superfamily of enzymes that catalyze the hydrolysis and synthesis of ester bonds (Holmquist, 2000). Esterases (EC 3.1.1.1) are enzyme that can hydrolyze short-chain fatty esters (≤C10), whereas lipases (EC 3.1.1.3) hydrolyze long-chain acylglycerols (≥C10) (Verger, 1997). These enzymes are excellent biocatalysts for various reactions, such as esterification and trans-esterification. Furthermore, lipolytic enzymes are widely used in the production of biofuels, foods, detergents, papers, textiles, pharmaceuticals, and chemicals (Fu et al., 2013; Li et al., 2013; Tran et al., 2013; Leis et al., 2015; Vici et al., 2015), in part due to their chemo- and region- selectivity, and their ability to catalyze reactions without cofactors. These properties not only make them an important class of enzymes for biotechnological applications but also an important group of biocatalysts in organic chemistry (Jaeger and Reetz, 2002; Kim et al., 2007).

Isolation and Sequence Analysis of the Esterase Gene

Expression and Purification of Esterase

The esterase gene from DAU221 was amplified without its signal peptide (the first 21 amino acids) and its stop codon using chromosomal DNA of M. thermotolerans as a template and the following two primers: 5′-GCGCACAGCGAATTCGCGCCGCGCTTTATT-3′ (forward, EcoRI restriction enzyme site in italics and underlined) and 5′-GTCCGGGACGTCGACTCACAGTTGCGGTAT-3′ (reverse, SalI restriction enzyme site in italics and underlined). The PCR product was double-digested by EcoRI and SalI restriction enzymes and ligated into the corresponding sites in the pCold I vector. The recombinant plasmid pCold-MtEst45-SP (designed to introduce a hexa-histidine tag at the N-terminus of the enzyme to facilitate purification) was transformed into E. coli JM109 and BL21 (DE3). A single colony of E. coli BL21 (DE3)/pCold-MtEst45-SP was inoculated into 10 mL LB medium containing ampicillin and incubated overnight at 37°C with shaking. When the optical density at 600 nm reached 0.4–0.5, protein expression was induced with 0.2 mM isopropyl-β-D-thiogalactoside (IPTG) for 24 h at 15°C. Cells were harvested via centrifugation at 5590 × g force for 15 min at 4°C and the pellet was re-suspended in binding buffer (20 mM sodium phosphate buffer [pH 8.0], 0.5 M NaCl, and 5 mM imidazole). The cells were disrupted via sonication on ice (pulse-on 30 s, pulse-off 30 s, 5 times), and the supernatant was collected via centrifugation at 16,000 × g force for 30 min at 4°C. The clear supernatant was loaded on to a HisTrap HP column (Amersharm Bioscience) that had been equilibrated with binding buffer, and the bound protein was eluted with elution buffer (20 mM sodium phosphate buffer [pH 8.0], 0.5 M NaCl, and 0.5 M imidazole) at a flow rate of 1 mL min−1. The eluted fractions were dialyzed overnight against 20 mM Tris-HCl buffer (pH 8.17) and concentrated using Amicon Ultra-4 spin columns (Millipore, Bedford, MA, USA). The protein concentrations of the enzyme preparations were determined following the method described by Bradford (1976) with bovine serum albumin as a standard (0.2–1 mg mL−1). Sodium dodecyl sulfate-polyacrylamide gel electrophoresis (SDS-PAGE) was performed using the Laemmli method (Laemmli, 1970).

Characterization of the Enzyme

To determine the optimal temperature for enzyme activity, the hydrolytic activity of esterase was measured at temperatures between 1 and 70°C under standard conditions (20 mM Tris-HCl buffer [pH 8.17]). Esterase thermostability was determined by pre-incubating the esterase at 25–70°C for up to 3 h before conducting the activity tests described above.

To optimize the pH and temperature condition for enzyme activity, response surface methodology (RSM) was explored. The central composite design consisting of 13 experimental runs with 5 replicates at the center point was used to optimize the independent variables which significantly influenced the enzyme activity. Based above experiments, two critical factors and their optimal ranges were selected in this experiment: pH (X1, 7.29–8.71) and temperature (X2, 30.86–59.14°C; Table 1). Empirical model equation (Equation 1) was created that correlated the relationship between the independent variables and the dependent variable by the statistical software Design-Expert (Version 8.0.7.1; Stat-Ease Inc., Minneapolis, USA).

where Y is the predicted response, Xi and Xj are variables, β0 is the constant, βi is the linear coefficient, βij is the interaction coefficient, and βii is the quadratic coefficient. 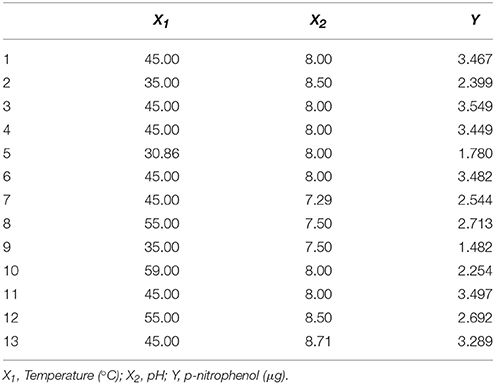 Phenylmethanesulfonyl fluoride (PMSF) on the esterase activity was also assessed. PMSF was pre-incubated with the enzyme for 10 min at 4°C before the enzyme was assayed. This short time period was used because the half-life of aqueous PMSF at pH 8.17 is 35 min, which renders it an unstable material in the presence of water (James, 1978). Finally, the enzyme was assayed for esterase activity in the presence of 10% (vol/vol) dimethyl sulfoxide (DMSO).

All of the experiments were performed in triplecates under standard assay conditions. The esterase activity measured without additives was set to represent 100% activity.

Complementary primers with the wild-type gene bearing the nucleotides to be changed were used for PCR. The PCR mixtures were treated with DpnI to digest the methylated template DNA. The mutation sites were confirmed via DNA sequencing. Plasmids were transformed into E. coli BL21 (DE3) cells for protein expression.

The nucleotide sequence reported in this study has been deposited in GenBank under the accession number KM362852.

Isolation and Sequence Analysis of MtEst45

The fosmid library was screened for lipolytic activity on LB-tributyrin agar media. Clones positive for tributyrin degradation were isolated and named TB1–TB9. The lipolytic-active TB8 clone was selected, and a subcloned library of TB8 was constructed via consecutive enzyme digestions with PstI and HindIII. TB8P1H1 exhibited lipolytic activity and contained a 5509 kb DNA insert. An open reading frame (ORF) analysis revealed two ORFs encoding proteins of over 300 amino acids from amongst six putative ORFs. The protein encoded by ORF1 shared high sequence identity with an acyl esterase from Microbulbifer agarilyticus (WP_010133327). The protein encoded by ORF2 had 85% sequence identity (354/416) with TldD protein from Microbulbufer sp. ZGT114 (KUJ83017).

The multiple sequence alignments of regions with the highest homology are shown in Figure 2. The results indicate that MtEst45 shares the typical serine catalysis penta-peptide GXSXG in protein sequence and also has common catalytic triad, which is consisted of Ser133, Asp237, and His265 (Brenner, 1988; Cygler et al., 1993; Arpigny and Jaeger, 1999). 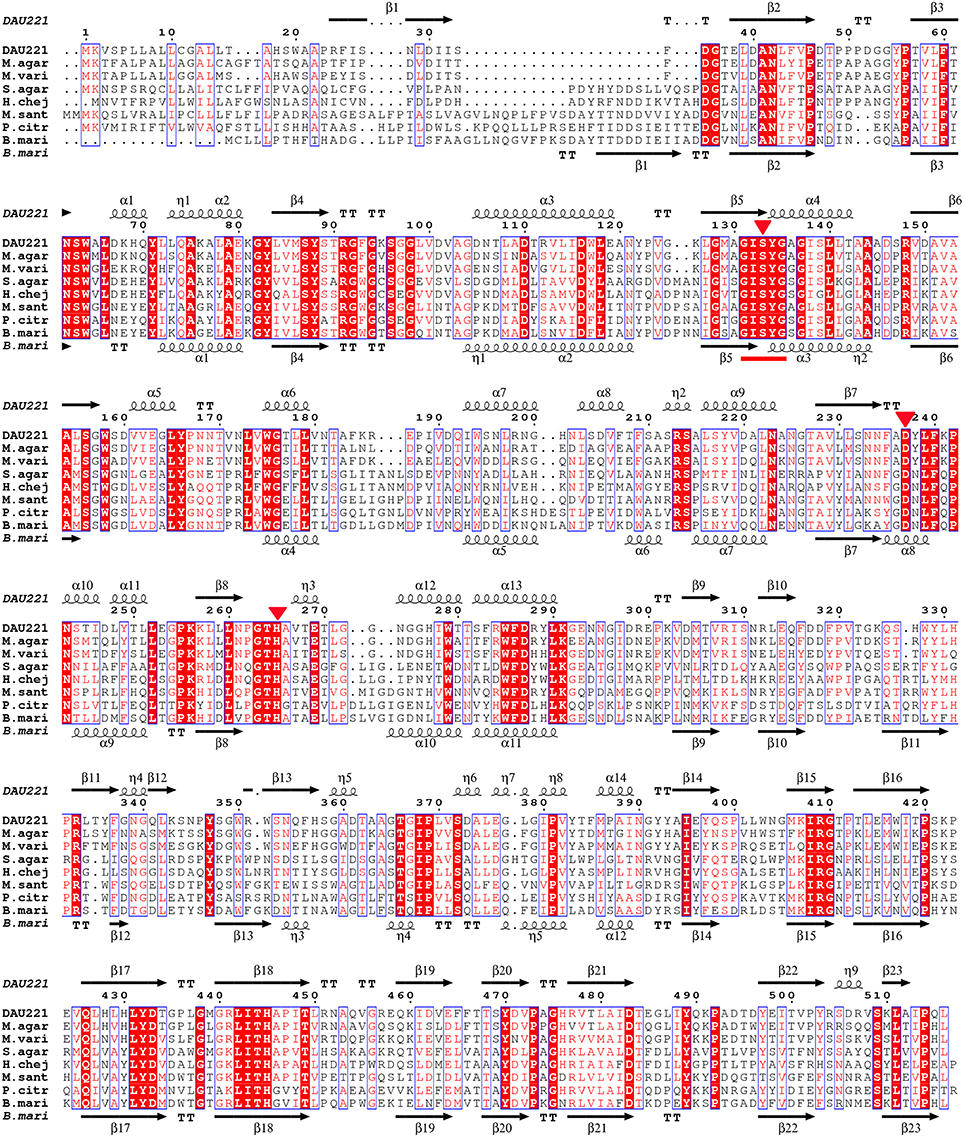 Expression and Purification of MtEst45

The gene sequence encoding the mature form of MtEst45 was amplified without the signal peptide and cloned into the pCold I vector for the enzyme expression and purification. The resulting expression plasmid pCold-MtEst45-SP contained a six histidine tag at the N-terminus of MtEst45 and was transformed into E. coli BL21 (DE3) for protein expression. E. coli BL21 (DE3) harboring pCold-MtEst45-SP was induced overnight with 0.2 mM IPTG at 15°C. The heterologously expressed MtEst45 protein was purified using His-tag affinity chromatography. SDS-PAGE analysis of the purified protein revealed a molecular weight (MW) of approximately 45 kDa under denaturing conditions (Figure 3). 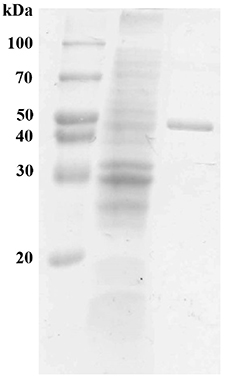 The Effects of Temperature and pH on MtEst45 Activity

Figure 4. Effects of temperature on the activity of MtEst45. Temperatures range from 1 to 70°C. Each reaction sample was compared with the standard assay control without any additive. The means of the relative values (n = 3) and standard deviations are shown.

The 13-runs, for two independent variables including pH (X1) and temperature (X2) were manipulated and optimized for MtEst45 activity. The results of the quadratic polynomial model fitting in the term of analysis of variance (ANOVA) were given in Table 2. A quadratic polynomial function was fit to the experimental values, resulting in the following regression equation (Equation 2):

where Y is the predicted p-nitrophenol yield (μg). The model F-value of 57.04 implies that the model is significant. The P < 0.05 suggests that the model is considered to be statistically significant at >95% confidence level. The large value of the regression coefficient (R2 = 0.9760) indicates that only 2.4% of the total variations are no explained by the model. The value of the adjusted determination coefficient (Adj R2 = 0.9589) is also very high to advocate for a high significance of the model. The low coefficient of variation (CV = 5.06%) also reveals that the model was accurate and reliable (Lee et al., 2015). A three-dimensional response surface was then plotted to illustrate the effects of pH and temperature (Figure 5). The model predicts a maximum enzyme activity of MtEst45 was observed to be 8.17 (pH; X1) and 46.27 (°C; X2), respectively. 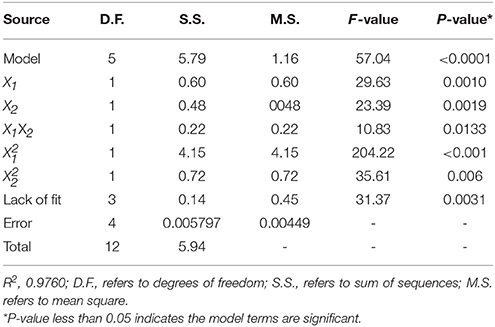 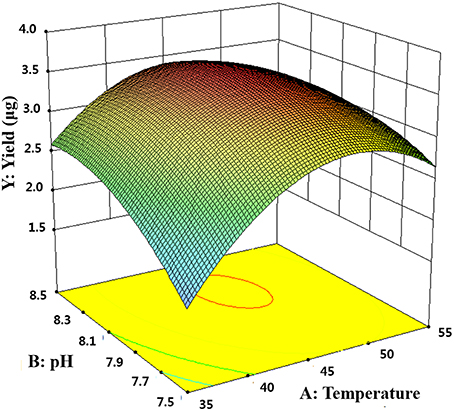 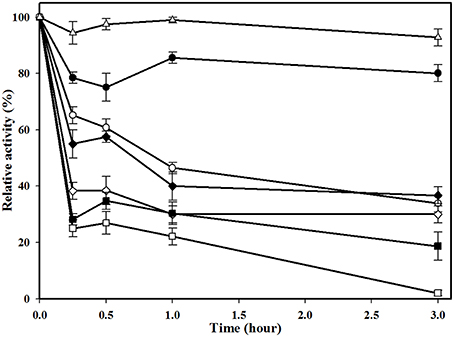 The Effects of Metal Ions and Additives on MtEst45 Activity 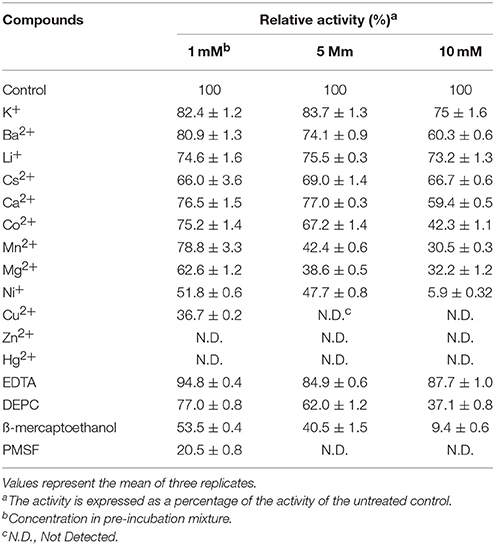 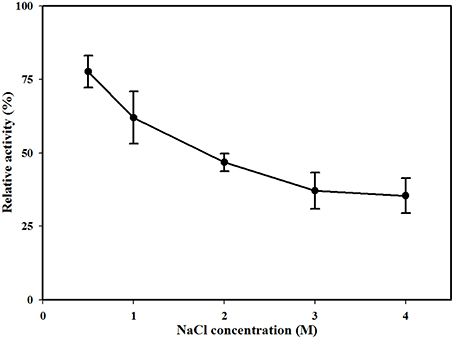 Figure 7. Effect of NaCl concentration on MtEst1 activity. The means of the relative values (n = 3) and standard deviations are shown.

The 3D models of MtEST45 and mutants were made using the Phyre2 server (Figure 8). In the obtained model, Ser133, Asp237, and His265 were indeed located in close proximity, most likely representing the actual active site. To confirm the predictions of the catalytic triad, these residues were substituted by site-directed mutagenesis. No activity was found in Ser133, Asp237, and His265 mutants, showing that these amino acids are likely to be essential for the enzyme catalysis.

Figure 8. Three-dimensional structural feature of MtEst45. (A) The cartoon representation of MtEst45 model (green). The carbon atoms for the catalytic triad residues are shown in magentas. (B) The detailed picture of the catalytic triad residues: S133, D237, and H265. (C) Structural picture of the S133A, D237N, and H265L mutants. The substituted amino acid residues are shown in yellow.

In conclusion, a new lipolytic enzyme family has been identified. This family includes MtEst45 from M. thermotolerans DAU221, which was isolated from the eastern coast of the Republic of Korea. MtEst45 is the first experimentally characterized enzyme of this new family of bacterial lipolytic enzymes from marine bacterial sources. More detailed enzymatic profiles of MtEst45 were required for the biotechnological applications.

This study was funded by the Dong-A University Research Fund.

Copyright © 2016 Lee. This is an open-access article distributed under the terms of the Creative Commons Attribution License (CC BY). The use, distribution or reproduction in other forums is permitted, provided the original author(s) or licensor are credited and that the original publication in this journal is cited, in accordance with accepted academic practice. No use, distribution or reproduction is permitted which does not comply with these terms.