This study assessed the fungal community composition and its relationships with properties of surface soils in the Ny-Ålesund Region (Svalbard, High Arctic). A total of thirteen soil samples were collected and soil fungal community was analyzed by 454 pyrosequencing with fungi-specific primers targeting the rDNA internal transcribed spacer (ITS) region. The following eight soil properties were analyzed: pH, organic carbon (C), organic nitrogen (N), ammonium nitrogen (NH4+-N), silicate silicon (SiO42--Si), nitrite nitrogen (NO2--N), phosphate phosphorus (PO43--P), and nitrate nitrogen (NO3--N). A total of 57,952 reads belonging to 541 operational taxonomic units (OTUs) were found. of these OTUs, 343 belonged to Ascomycota, 100 to Basidiomycota, 31 to Chytridiomycota, 22 to Glomeromycota, 11 to Zygomycota, 10 to Rozellomycota, whereas 24 belonged to unknown fungi. The dominant orders were Helotiales, Verrucariales, Agaricales, Lecanorales, Chaetothyriales, Lecideales, and Capnodiales. The common genera (>eight soil samples) were Tetracladium, Mortierella, Fusarium, Cortinarius, and Atla. Distance-based redundancy analysis (db-rda) and analysis of similarities (ANOSIM) revealed that soil pH (p = 0.001) was the most significant factor in determining the soil fungal community composition. Members of Verrucariales were found to predominate in soils of pH 8–9, whereas Sordariales predominated in soils of pH 7–8 and Coniochaetales predominated in soils of pH 6–7. The results suggest the presence and distribution of diverse soil fungal communities in the High Arctic, which can provide reliable data for studying the ecological responses of soil fungal communities to climate changes in the Arctic.

The Arctic tundra covers approximately 5% of Earth’s land surface (Nemergut et al., 2005) and is one of the most extreme environments on Earth, characterized by low temperatures, frequent freeze-thaw and wet-dry cycles, and low organic matter content. The Arctic tundra is particularly sensitive and vulnerable to global climate change that a rapid rate of climate warming has been observed in recent decades. Arctic average temperatures have increased at almost twice the global average rate over the past 100 years (Solomon, 2007). Some marked environmental changes in the Arctic have been observed by researchers, such as retreat of glaciers, melting of permafrost and sea ice, changes of vegetation, alteration of nutrient cycling and energy flow (Overpeck et al., 1997; Schuur et al., 2009; Pearson et al., 2013).

The study site was located in the Ny-Ålesund Region (78°55′ N, 11°56′ E), which is on the west coast of Spitsbergen, the largest island of the Svalbard archipelago. It has the lowest temperatures during February, at an average of - 14°C, and a high average of 5°C during July1. The tundra around Ny-Ålesund experiences a short growing season (June to August) when the temperature typically rises only a few degrees above the freezing point. The local area has a silty clay and sand gley soil that has a thin organic soil cover. The soil thawing begins in early June, and the thaw depths reach their maximum (1.6–2.0 m) in the beginning of September and remain approximately constant until at least the mid of the month (Zhu et al., 2012).

Sampling was performed during China’s Arctic expedition in July 2013. The sample collection was under ethical approval of the Svalbard Science Forum, Kings Bay As, and the Chinese Arctic and Antarctic Administration (CAA), the State Oceanic Administration (SOA) of China. Surface soil samples from bare ground without vegetation (∼10 cm2) were collected from the top 5 cm at each sampling sites using a sterile shovel. A total of thirteen samples were collected and directly put into TWIRL’EM sterile sampling bags (Labplas Inc., Sainte-Julie, QC, Canada). Soil samples were placed in centrifuge tubes at -20°C in the Yellow River Station (China) for about 20 days and taken to the home laboratory in China by plane. Soil samples were then frozen at -80°C until nucleic acid extraction. The locations of the thirteen soil samples are shown in Table 1.

TABLE 1. Locations and geochemical properties of 13 soil samples investigated in the present study.

Physical and Chemical Properties of Soil

Genomic DNA was extracted from an aliquot of 0.25 g of wet soil from each sample using a PowerSoil DNA Isolation Kit (MO BIO Laboratories, San Diego, CA, USA) according to the manufacturer’s instructions (three replicates for each sample). The combined DNA extracts were then used for the subsequent PCR and sequencing experiments. The primer pair ITS1F (5′-CTTGGTCATTTAGAGGAAGTAA-3′) and ITS4 (5′-TCCTCCGCTTATTGATATGC-3′) (White et al., 1990) was used for amplifying the rDNA internal transcribed spacer (ITS, ITS1-5.8S-ITS2) region. The PCR amplification was performed using the Amplicon Fusion Primers 5′-A-x-ITS1F-3′ and 5′-B-ITS4-3′, where A and B represent the pyrosequencing adaptors (CCATCTCATCCCTGCGTGTCTCCGACGACT and CCTATCCCCTGTGTGCCTTGGCAGTCGACT, respectively) and x represents an 8 bp-tag for sample identification. The 20 μl reaction mixture contained 10 ng of template DNA, 4 μl of 5 × buffer (50 M Tris-HCl, pH 8.3–8.8), 2 μl of 2.5 nM dNTPs, 0.8 μl of Fastpfu Polymerase, 2 μM of each primer and ultra-pure sterilized water. The PCR amplification consisted of an initial denaturation at 95°C for 2 min, followed by 30 cycles of denaturation at 95°C for 30 s, annealing at 55°C for 30 s, and extension at 72°C for 30 s, and a final extension at 72°C for 5 min.

Raw sequence data from pyrosequencing were processed using QIIME 1.8.0 software (Caporaso et al., 2010). Briefly, the sequence libraries were split and denoised to avoid diversity overestimation caused by sequencing errors, such as sequences with an average quality score <20 over a 50 bp sliding window, sequences shorter than 200 bp, sequences with homopolymers longer than six nucleotides, and sequences containing ambiguous base calls or incorrect primer sequences. Operational Taxonomic Units (OTUs) were clustered with a 97% similarity cutoff using UPARSE (Edgar, 2013), and chimeric sequences were identified and removed using UCHIME (Edgar et al., 2011). Singleton OTUs, and OTUs that were assigned to non-fungal organisms and had unreliable BLAST matches (max score below 200 or aligned query sequence below 200 bp) were removed. These OTUs were then used as a foundation for calculating alpha-diversity and beta-diversity metrics using QIIME 1.8.0 software (Caporaso et al., 2010).

Physical and Chemical Properties of Soil

The raw data from the 13 soil samples consisted of 106,003 sequence reads, of which 57,952 reads representing 541 fungal OTUs were included in the final matrix after quality filtering and processing. The number of OTUs in different soil samples ranged from 56 to 214 (Table 2). The taxonomy of all detected OTUs is listed in Supplementary Table S2. The Chao 1, Good’s coverage estimator and Shannon’s index were used to evaluate and compare the diversity of the fungal communities among different soil samples (Table 2). The Good’s coverage estimator ranged from 98.46 to 99.73%, indicating that 454 pyrosequencing captured the dominant phylotypes. The Shannon’s index (H′ = 2.73–5.64) indicated that diversity varies among the 13 soil samples.

TABLE 2. Summary data for pyrosequencing data from the 13 soil samples.

FIGURE 1. The relative abundances of different phyla (A) and orders (B) in the thirteen soil samples in the present study. The 13 soil samples were arranged in the order of the pH values (from the lowest pH in the left to the highest pH in the right).

In terms of original reported habitats, most of matching sequences with high similarity (≥97%) in GenBank were derived from fungi found in soils the Arctic tundra, including Svalbard and North American Arctic. Additionally, some matching sequences were also reported from other habitats (e.g., plant tissues, glacier ice, sediments) in and beyond the Arctic regions (Supplementary Table S2).

The Correlation Between Soil Fungal Communities and Geochemical Properties 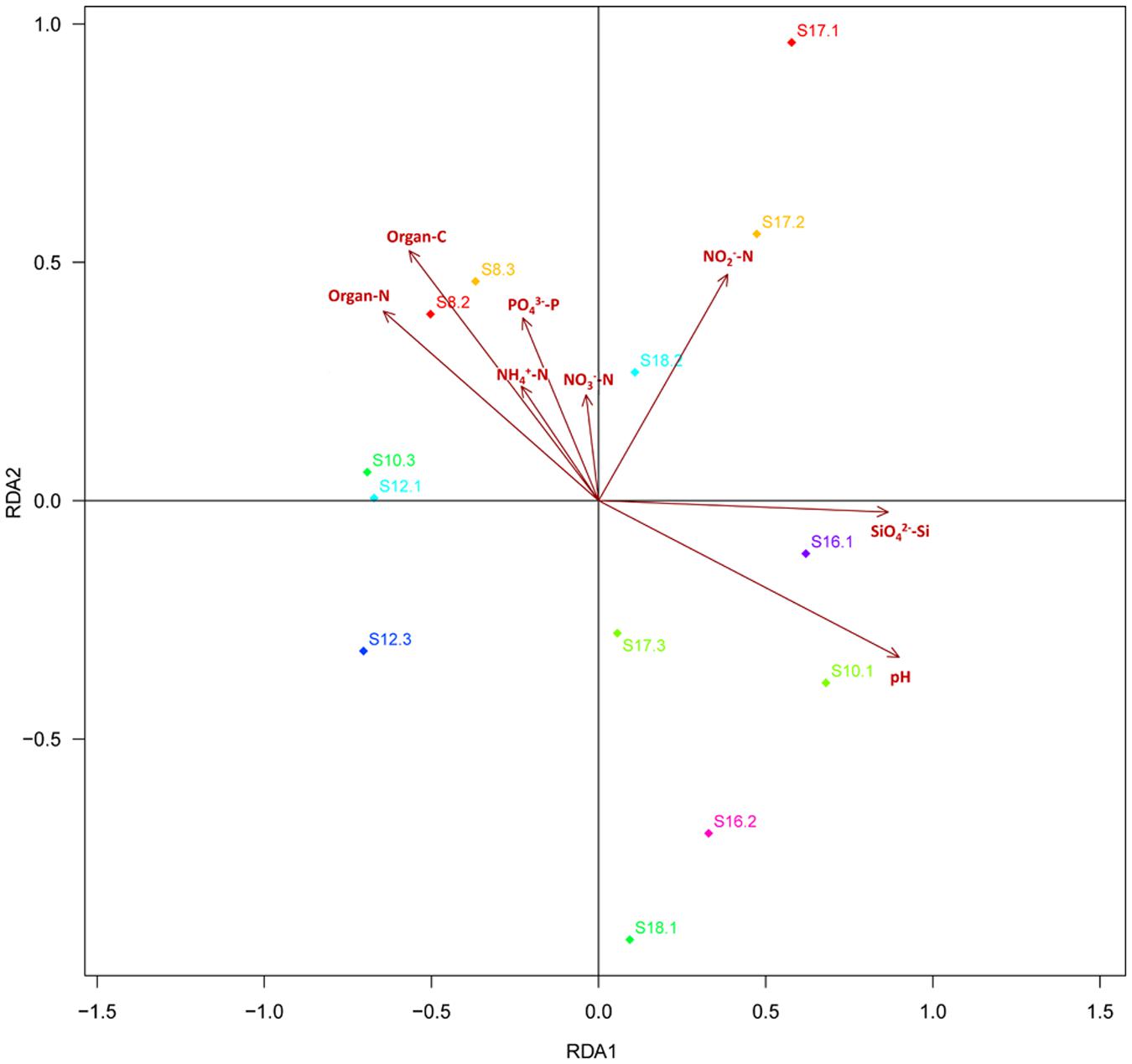 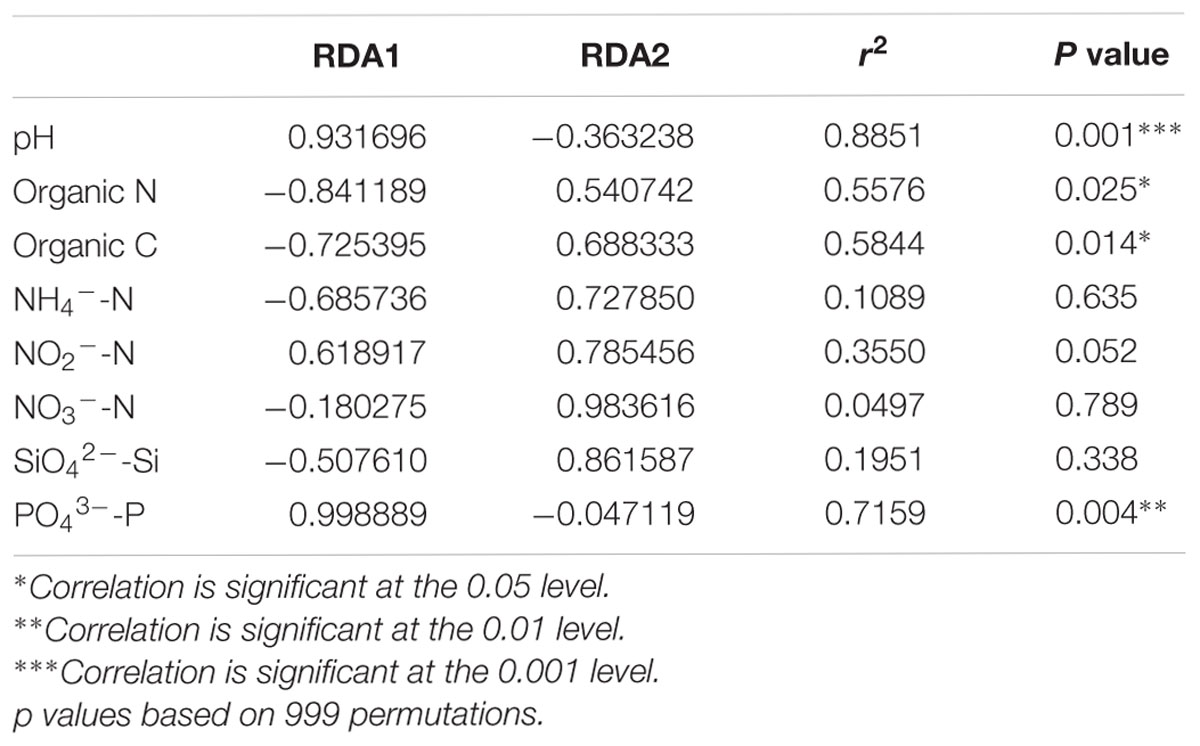 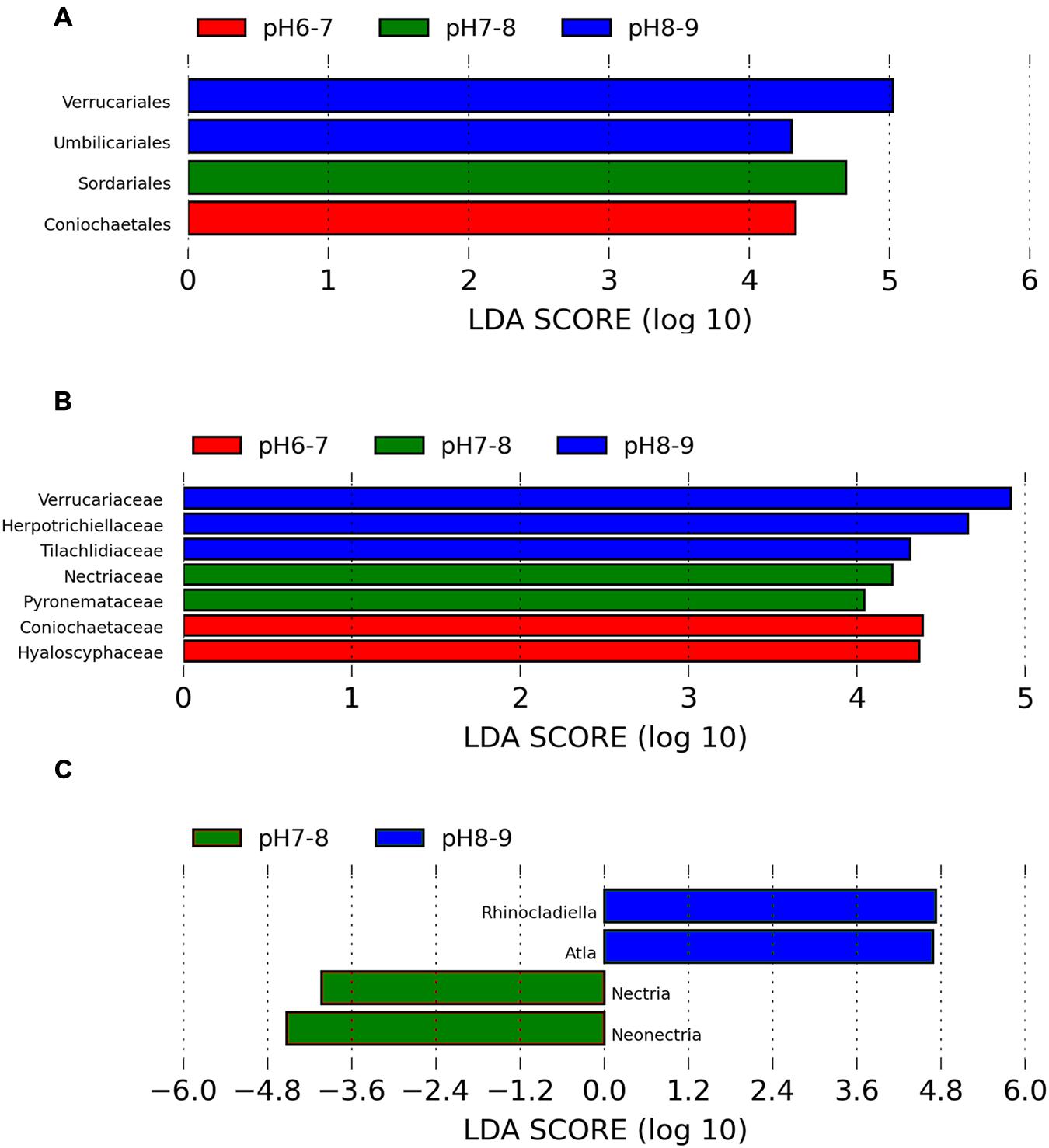 FIGURE 3. The Lefse analysis showing the fungal orders (A), families, (B), and genera (C) which are significantly different among three soil pH levels. 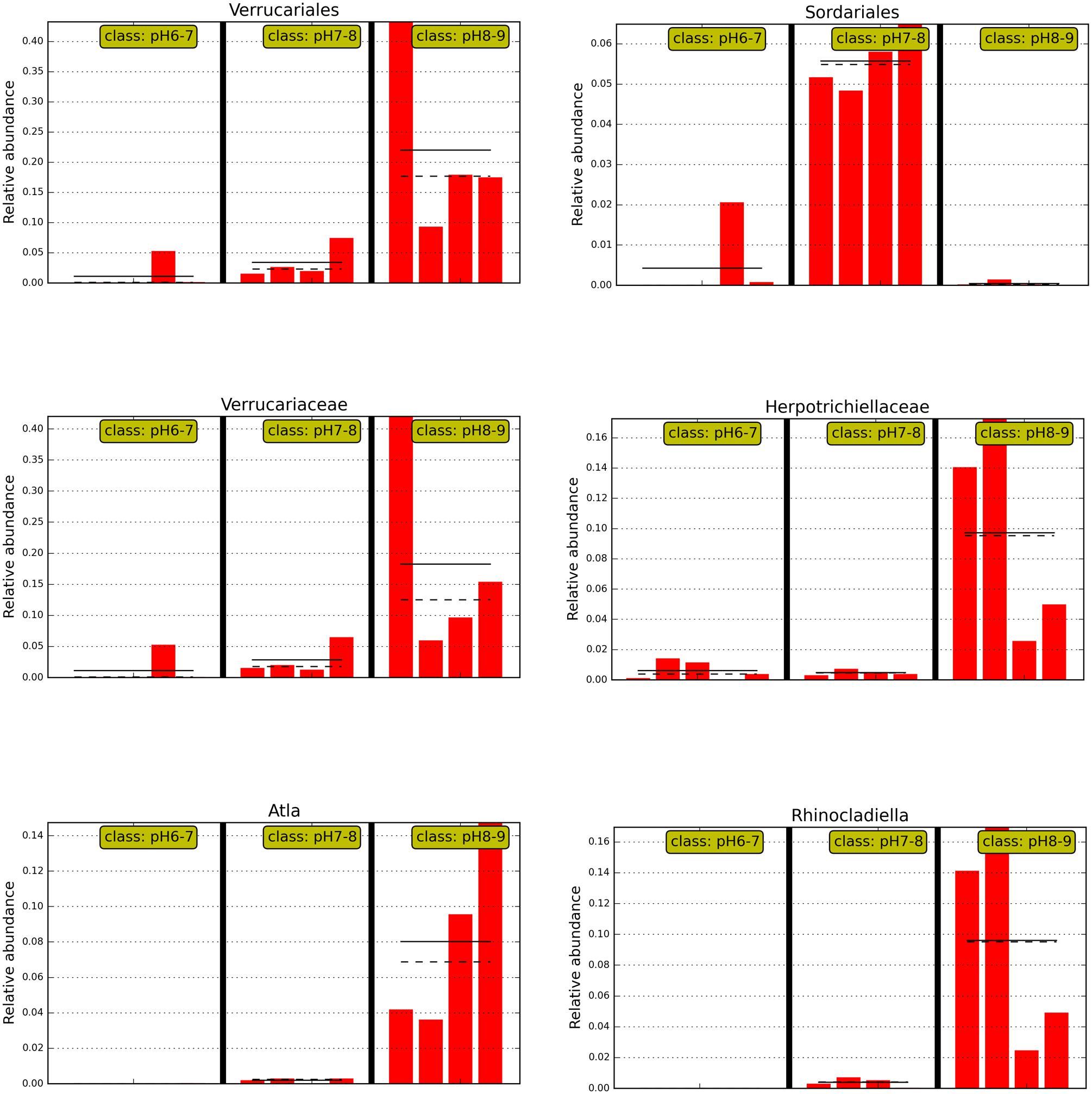 Despite the geographic isolation and High Arctic climate of Svalbard, the soil fungal communities are surprisingly diverse in this High Arctic region. Members of Ascomycota were more frequently identified in soils than those of Basidiomycota and Chytridiomycota. Additionally, Zygomycota, Glomeromycota, and Rozellomycota were less abundant in the Arctic soil environments. These findings were consistent with previous studies of soil fungi in Arctic tundra. Gittel et al. (2014) reported that the most abundant phyla were Ascomycota and Basidiomycota and other phyla (i.e., Chytridiomycota, Glomeromycota, and Zygomycota) accounted for only a minor fraction in Siberian tundra (High Arctic). Wallenstein et al. (2007) reported that soil fungal communities were dominated by Basidomycota and there were also a large proportion of Ascomycota, and lesser relative amounts of Zygomycota, Chytridmycota, and Glomeromycota in Alaska (Low Arctic).

From db-RDA analysis in this study, soil pH was the most important environmental factor (p = 0.001) that was correlated with soil fungal communities in the Ny-Ålesund Region. An ANOSIM analysis also revealed that fungal communities inhabiting soils of different pH levels were significantly different (p < 0.05). All these results suggested that soil pH was a key factor shaping the fungal community structure in this High Arctic region. Silicate silicon (p < 0.01), organic C (p < 0.05), and organic N (p < 0.05) were also found to be significantly related to soil fungal community composition in this study. It is generally believed that some soil characteristics (e.g., organic matter) are directly or indirectly related to soil pH levels. Interestingly, significant correlations were observed between pH and other soil properties in the present study, including soluble silicate (r = 0.768, p < 0.01), organic C (r = -0.596, p < 0.05), and organic N (r = -0.666, p < 0.05) (Supplementary Table S1). The organic carbon (C) and nitrogen (N) could be transferred into soils by vegetation and animal activities. Stempniewicz et al. (2007) reported that animal feces, carcasses and plants are important contributors to the nitrogen (N) and phosphorus (P) cycles in High Arctic soils. Liu et al. (2015) found that the vegetation had a significant effect on the content of soluble silicon in soils of Ny-Ålesund.

Soil pH may directly affect fungal community composition by imposing a physiological constraint on fungal survival and growth and some fungal taxa may be unable to grow or survive if the soil pH falls outside a certain range. Fungi generally grow well in acidic conditions (Dix and Webster, 1995), but some fungi (e.g., Mortierella, Peziza) grow well in neutral to slightly alkaline conditions (Warcup, 1951; Yamanaka, 2003). As not all members of the same phylum behaved in the same way, it is interesting to examine the different responses of fungal phylogenetic groups, especially groups at the lower taxonomic levels. In this study, many phylogenetic groups at order, family, and genus levels showed significantly different responses to soil pH levels (as shown in Figure 3).

Interestingly, soil samples in glacier foreland (at high altitude) were generally alkaline (pH 8–9), whereas pH values of soil samples, which are far away from glacier forelands, were generally below 8. Glacial retreat leads to subsequent exposure of foreland soils to atmospheric conditions, thus creating a sequence of change in the soil environments, such as the low levels of nutrients present in foreland soils and the decrease in soil pH that occurs along the chronosequence (Hodkinson et al., 2003). We hypothesize those lichen-forming fungi, e.g., Verrucariales (order), Verrucariaceae (family), and Atla (genus), may serve as pioneer organisms and firstly colonize and dominate in the glacier foreland soils. A previous study also reported that some members of Verrucariaceae prefer sites with high pH (calcareous sites) (Shivarov, 2013; Gueidan et al., 2014). In addition, non-lichen forming fungi predominated in soil samples of pH < 8.0. For example, Sordariales (order) predominated in soil samples of pH 7–8, whereas Coniochaetales (order) predominated in soil samples of pH 6–7. Yamanaka (2003) found that many of the saprotrophic species grew well at pH 7 or 8 and the ectomycorrhizal species showed optimum growth at pH 5 or 6. Most members of Sordariales are saprobic and consist of mostly wood- and dung-inhabiting species, whereas members of Coniochaetales (order) always occur on wood, dung or soil (Zhang et al., 2006).

The Supplementary Material for this article can be found online at: https://www.frontiersin.org/article/10.3389/fmicb.2016.00227

Copyright © 2016 Zhang, Wang, Liu, Zhang and Yu. This is an open-access article distributed under the terms of the Creative Commons Attribution License (CC BY). The use, distribution or reproduction in other forums is permitted, provided the original author(s) or licensor are credited and that the original publication in this journal is cited, in accordance with accepted academic practice. No use, distribution or reproduction is permitted which does not comply with these terms.