Methods: In Multi-Fluorescence quantitative Real-Time PCR (MF-qRT-PCR) assay, 10 probes labeled with four kinds of fluorophores were designed to detect the mutations in regions of rpoB, katG, mabA-inhA, oxyR-ahpC, and rrs.

Conclusions: MF-qRT-PCR assay was an efficient, accurate, reliable, and easy-operated method for detection of RIF and INH-resistance, and distinction of MTC and NTM of clinical isolates.

Worldwide prevalence, high misdiagnosis rate, high treatment cost, and serious side-effects of drug made MDR-TB a critical problem for global public health (WHO, 2012). Therefore, rapid and accurate assays for resistance to first line anti-TB drugs (RIF and INH being the most significant) are decisive in choosing drugs when starting therapy.

In the present study, we designed an improved MF-qRT-PCR assay that uses 10 probes for the detection of drug-resistant mutations in the 81-bp hot-spot region of rpoB, codon 315 of katG, −15 position in the promoter of mabA-inhA, −6 ~ −47 positions in the intergenic region of oxyR-ahpC, and 451 ~ 471 positions in rrs to distinguish MTC from NTM simultaneously. We evaluated this assay using 261 bacterial isolates and 33 sputum specimens from three cities (Shenzhen, Wuhan, and Shanghai) in China, compared to DNA sequencing and phenotypic DST results.

And we compared the advantages and disadvantages of MF-qRT-PCR assay with other diagnosis methods in Discussion.

Two hundreds and sixty-one bacterial isolates of TB patients were used in this study. Among these, 150 isolates (collected at the Wuhan Medical Treatment Center from August 2009 to March 2010) were routinely cultured with egg-based Löwenstein-Jansen medium at 37°C, 91 isolates (collected at the Shenzhen Third People's Hospital from January 2011 to November 2011) and 20 isolates (collected at Shanghai Pulmonary Hospital) were selected from the cultures grown in Bactec MGIT 960. Thirty-three clinical sputum specimens of TB suspects were selected randomly from Shenzhen Third People's Hospital. H37Rv strain was a gift from State Key Laboratory of Genetic Engineering, Institute of Genetics, School of Life Science, Fudan University and was served as the wild-type Mycobacterium tuberculosis Complex (MTC) control.

DST, sequencing, and MF-qRT-PCR assay were performed on all bacterial isolates. Clinical sputum specimens were divided into two portions. One portion of each sputum sample was cultured using Bactec MGIT 960. The other portion was treated to perform MF-qRT-PCR, and was analyzed by TB quantitative PCR kit (Qiagen, Germen).

In order to extract DNAs of clinical sputum specimens, 2–3 volumes of 4% NaOH were added to the sputum specimens. The mixture was agitated at 140 rpm for 30 min at 37°C. Then 1 ml completely liquefied mixture were added to a new centrifuge tube, centrifuged at 13,000 rpm for 10 min, and discarded supernatant. Added 1 ml normal saline into the sediment, centrifuged at 13,000 rpm for 10 min, discarded supernatant. Then followed treatments of culture isolate specimens mentioned above. 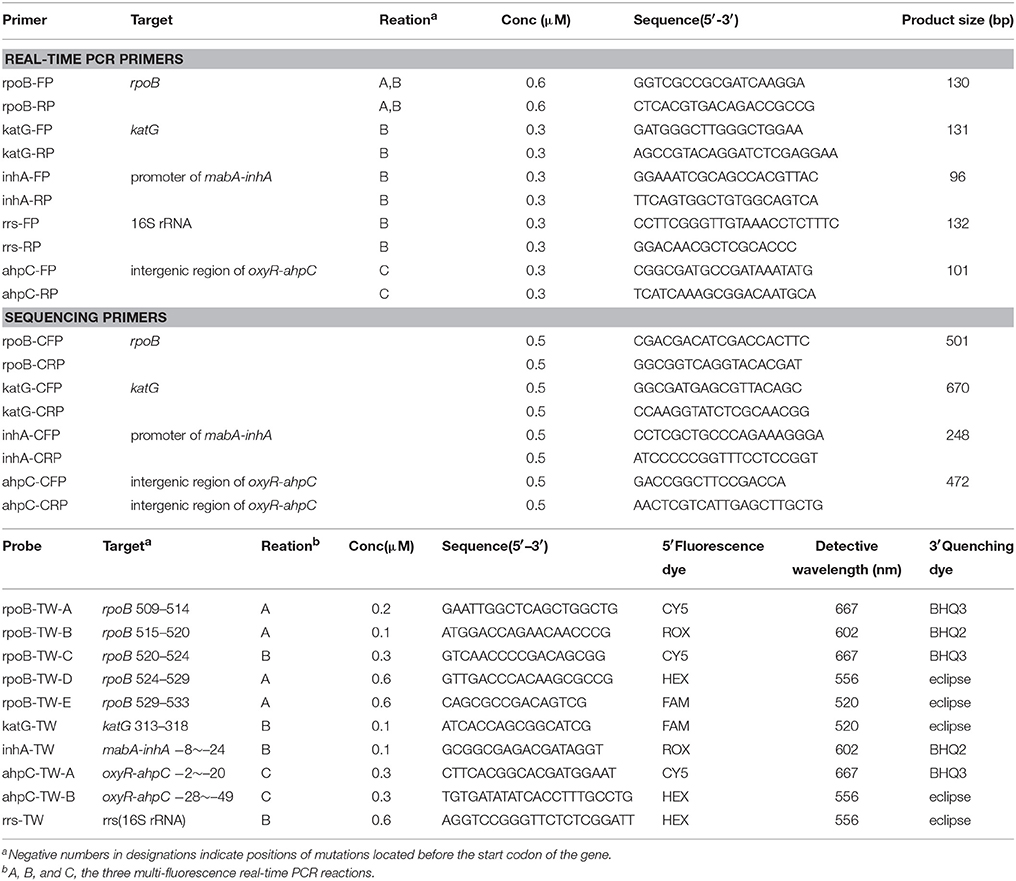 Table 1. Primers and Probes designed and used in this study.

Four fluorescence (FAM, HEX, ROX, CY5/TAMRA) were labeled at the 5′end of probes to simultaneously detected in a single PCR reaction (Figure 1). 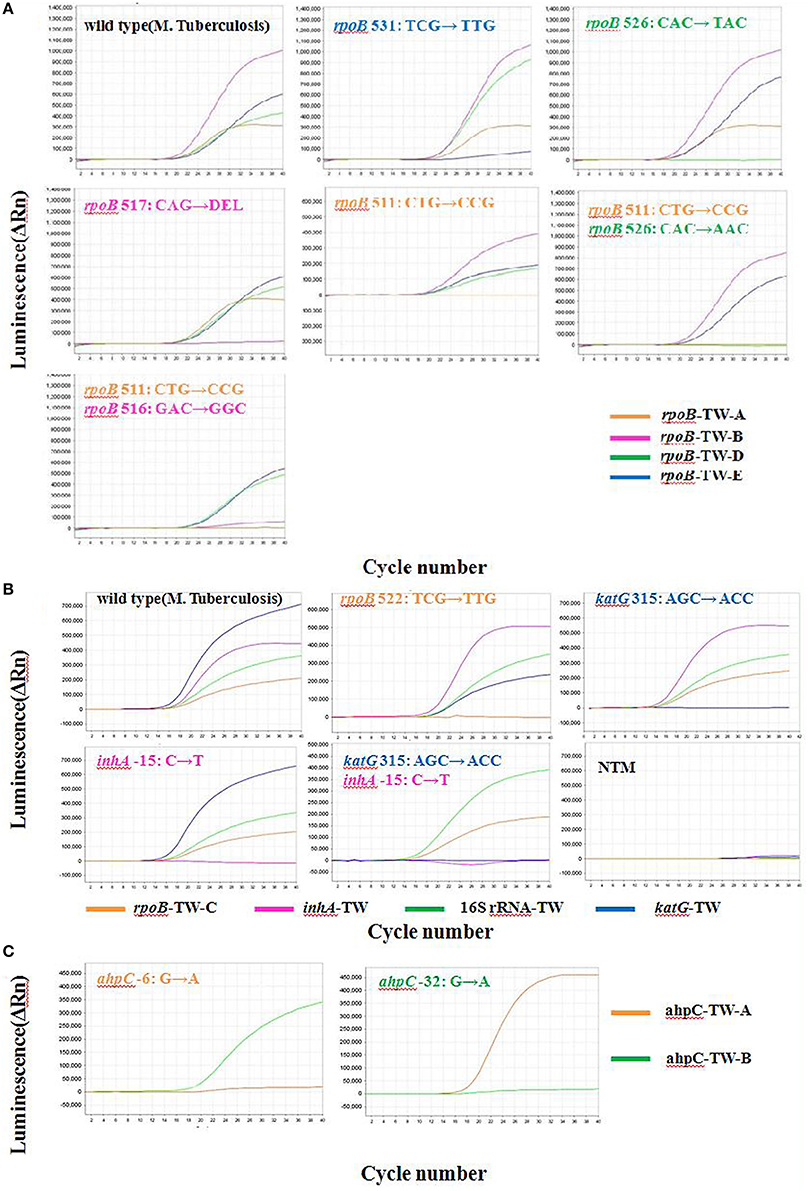 Three PCR reactions were required to diagnose samples' RIF and INH resistance. PCR mixture contained: 10 × PCR buffer 2 μl, dNTP (each 2.5 μM) 1.6 μl, MgCl2 (25mM) 0.8 μl, Taq(5U/ul) 0.2 μl, primers, and probes (Optimal concentrations of primers and probes for each PCR reaction are shown in Table 1), extracted DNA template 1 μl, miliQ H2O was added to make up the whole PCR mixture volume to 20 μl. Final concentrations of probes were different, in order to get the equivalent fluorescence signal level. Cycling parameters were denatured at 94°C for 2 min, followed by 40 cycles of amplification at 95°C for 15 s, 62°C for 1 min. A negative control which ddH2O replace the DNA sample and a positive control (DNA extraction of H37Rv) were included for each real-time PCR assay.

Firstly, when rrs probe signal was negative, template is determined as NTM, positive signal means MTC. Secondly, signals of the other nine drug resistant probes were investigated. Positive signals of all the five RIF probes (rpoB-TW-A ~rpoB-TW-E) represented no mutation in the 81 bp core region of rpoB, meaning that this sample was RIF-sensitive, otherwise means the sample is RIF-resistant. Similarly, the sample was INH-sensitive when probes katG-TW, inhA-TW, ahpC-TW-A, and ahpC-TW-B were all positive. Otherwise means INH-resistant (Table S1).

Reactions were performed with serially diluted genomic DNAs (gDNA; range, 5.0 × 105–5.0 × 100 copies per reaction mixture) of H37Rv. Concentration of each gDNA was determined by an SMA1000 UV spectrophotometer (Merintion, CN).

In order to investigate the specificity of MF-qRT-PCR, DNAs extract from H37Rv,BCG,E.coli, clinical strains of M. tuberculosis, M. bovis, and NTM were used as real time - PCR template.

261 MTC and NTM discrimination Culture isolates from Wuhan previously identified by conventional biochemical methods were confirmed by 16S rRNA gene sequencing. Strains isolates from Shenzhen and Shanghai were discriminate as MTC or NTM by Bactec MGIT 960.

Table 2. Locality, species, and drug resistance (detected by three methods) of samples in this study.

Taken together, mutations in the 81-bp core region of rpoB and mutation sites in three isoniazid resistance-conferring regions identified 97.3% of the RIF-resistant isolates and 87.7% of the INH-resistant isolates.

Assess Sensitivity and Specificity of MF-qRT-PCR

Signals of 16S rRNA probes were negative, when H2O, DNAs extracted from clinical strains of NTM as well as E. coli were used as real time—PCR template. On the other hand, we got positive results of 16S rRNA signals when detecting H37Rv, clinical strains of M. tuberculosis, M. bovis, and BCG. Therefore, specificity of this method for the M. tuberculosis complex was quite prominent.

MF-qRT-PCR results of several typical mutants were shown in Figure 1. Figure 1 showed when the probes of MF-qRT-PCR assay detected their target DNA segments (wild type, with no typical mutants), apparent fluorescence signals were released, and “S” shape amplification curves of PCR appeared. When the probes detected target DNA segments (with at less one mismatch base), no significant signal would be released, and amplification curves would be flat. It means that the probes of MF-qRT-PCR assay can distinguish typical mutants in regions of rpoB, katG, mabA-inhA, oxyR-ahpC, and rrs from wild types very easily and clearly.

Molecular mechanism of resistance to anti-TB drugs is becoming clearer. Several studies have demonstrated that 90–95% of isolates with rifampin resistance have mutations within the 81-bp core region (codons 508–533) of rpoB, (Alcaide and Telenti, 1997), with emphasis on the codons 516, 526, and 531(Escalante et al., 1998),or codons 531, 526, 516, 533, 513 were the most emerged mutations(Luo et al., 2010). Mutations at codon 315 of katG, −15 position of the promoter of mabA-inhA and −6 ~ −47 positions of intergenic region of oxyR-ahpC are considered to be responsible for 80–90% of strains resistant to INH (Cockerill et al., 1995; Slayden and Barry, 2000). Presence of these mutations indicates RIF and INH resistance. Our sequencing result approved these conclusions. Mutations in rpoB 3 isoniazid resistance-conferring regions identified 97.3% of the RIF-resistant isolates and 87.7% of the INH-resistant isolates.

In this study, we have developed MF-qRT-PCR assay which used probes with four fluorescent labels for analysis of RIF and INH resistance, by detecting drug-resistant mutations in the 81-bp hot-spot region of rpoB, codon 315 of katG, −15 position in promoter of mabA-inhA, −6 ~ −47 positions in intergenic region of oxyR-ahpC. And we can also distinguish MTC from NTM at the same time by detecting mutations between 451~471 positions in gene rrs which transcript 16S rRNA.

Secondly, comparing with (Gomez et al., 2010), data analysis and result determination of MF-qRT-PCR were easier and clearer. No need to calculate and compare the CT values between positive control and negative control, just directly distinguish positive and negative result by threshold line.

Thirdly, more fluorescence dyes were employed [four-color instead of single or two-color(Torres et al., 2003; Lin et al., 2004; Yesilkaya et al., 2006; Gomez et al., 2010; Zenteno-Cuevas et al., 2012)] in our study. So, MF-qRT-PCR analysis can reduce the amount of the PCR reactions, decrease the differences between PCR tubes, and increase the convenience of operation.

Fourthly, the sensitivity and specificity of MF-qRT-PCR method were equivalent to the 3′-minor groove binder(MGB) probes-based method(van Doorn et al., 2003; Wada et al., 2004; Madania et al., 2012) and the cost is about a half of the latter.

When compared to Xpert MTB/RIF(Boehme et al., 2010), MF-qRT-PCR method not only identified rpoB 81 bp core region of mutation (RIF-resistant) but also detected katG and inhA (INH- resistance). Instead of the flanking sequence of rpoB core region that XpertMTB/RIF adapt to, we designed MTC identification probe targeting the special region within the 16S rRNA- coding gene (rrs). In this region, the MTC sequences are highly dissimilar to the sequences of NTM. Therefore, we can gain drug susceptibility (RIF and INH resistance) results and distinguish MTC from NTM in a single test. As the genome of MTC has more copies of 16S rDNA than rpoB, rrs(16S-rDNA) probe will have higher assay sensitivity than probes targeting rpoB.

Firstly, as outlined above, MF-qRT-PCR assay can detect more genetic loci (such as the intergenic region of oxyR-ahpC) than previous studies. So the sensitivity of INH-resistance detection was increased.

Secondly, MF-qRT-PCR assay had easier and clearer result criteria, because in every mutant position, operator can easily distinguish “S” shape amplification curves (means wild type, no mismatch base existed) from flat line (means mutant, at less one mismatch base existed), as Figure 1 showed, explained in Results part). In addition, melt-curve method (Pietzka et al., 2009) had to compare the melting peak temperature between test specimens and standard wild-type specimens. In another study (Ramirez et al., 2010), researcher couldn't distinglish A->T transversion SNPs from wild type in HRM graph displayed in normalized mode, so additional amplification curve assay had to be used to detect Asp516Val in rpoB. That increases the complexity of analysis.

It was more subjective than the former and requires more experimental experience to operate, especially when multiple mutations emerge simultaneously in one reaction or fluorescent signal is weak.

Finally, the whole testing progress of MT-qRT-PCR can be finished in 2.5 h. It is faster than conventional DST and most of the molecular drug-resistance assays.

Compared with DST results, MF-qRT-PCR got increased false negative case (eight in detecting RIF, 23 in detecting INH resistance) (Table 3). These were because of the existence of unknown drug resistant loci and mechanisms.

Our method had difficulty in detecting mixed strains (both wild type and drug-resistant mutant) directly, such as Xpert MTB/RIF. All probes we used are wild-type probes, so if wild type templates and mutant templates were both in the specimens, test result would be positive, which covered the presence of the mutant template. However, if we could control the concentration of the initial template before PCR reaction, the CT value of the pure wild-type template will be significantly smaller than the mix infected template. So if we calculated the ΔCt between pure wild-type and test sample, and set an appropriate CUTOFF value, we could semi-quantitatively distinguish wild-type infection from mixed infection.

It's easy to increase a probe that specifically recognizes most species of Mycobacterium using this approach, so that it can cooperate with rrs (16S rRNA) probe to distinguish MTC, NTM, and other bacteria succinctly and accurately. Likewise, probes targeting other genes or regions associated with other anti-TB drugs could be added to this assay without technical limitations.

In summary, we have developed a widely applicable MF-qRT-PCR assay to detect RIF and INH-resistant mutations in M. tuberculosis and distinguish MTC from NTM in 2.5 h. This improved approach has been proven to be efficient, accurate, reliable, and easy-operated. Further studies are required to optimize this method and evaluate its performance on clinical sputum and other types of specimens.

The Supplementary Material for this article can be found online at: https://www.frontiersin.org/article/10.3389/fmicb.2016.00618

Copyright © 2016 Peng, Yu, Cui, Xue, Luo, Wen, Liu, Jiang, Zheng, Wu, Zhang and Li. This is an open-access article distributed under the terms of the Creative Commons Attribution License (CC BY). The use, distribution or reproduction in other forums is permitted, provided the original author(s) or licensor are credited and that the original publication in this journal is cited, in accordance with accepted academic practice. No use, distribution or reproduction is permitted which does not comply with these terms.