Institute of Bioengineering, Research Center of Biotechnology of the Russian Academy of Sciences, Russia

Hyperthermophilic enzymes are stable and active at high temperatures of >70°C (Vieille et al., 1996). These enzymes can be studied using model systems to elucidate enzyme mechanisms and evolution of proteins stable at high temperatures and to determine the higher temperature limit for enzyme stability (Vieille and Zeikus, 2001). In a previous study, V. thermophila CBA1501T (= ATCC BAA-2415T = JCM 17228T) was isolated from solfataric soil in the Republic of the Philippines (Yim et al., 2015). It was found to grow at 75–90°C, pH 4.0–6.0, and 0–1.0% (w/v) NaCl, with optimal growth at 85°C, pH 5.0, and 0% (w/v) NaCl. Here, a genome sequence of V. thermophila CBA1501T has been reported and information of hyperthermophilic enzymes of high biotechnological value has been provided.

The draft genome sequence of V. thermophila CBA1501T was 2,022,594 bp in length, with a G+C content of 49.1 mol % in 10 contigs. The largest contig was 791,731 bp long, and the N50 value was 634,758 bp. The genome was found to contain 2170 CDSs, one 16S-23S-5S rRNA gene operon, and 41 tRNA genes. Genomic features are shown in Figure 1. On the basis of information from the EggNOG v. 4.1 database, 1927 genes were categorized into Clusters of Orthologous Groups of proteins (COGs) functional groups. The most abundant COG category was “Function unknown” (S; 729 genes), followed by “Energy production and conversion” (C; 178 genes), “Amino acid transport and metabolism” (E; 168 genes), “Translation, ribosomal structure and biogenesis” (J; 159 genes), “Carbohydrate transport and metabolism” (G; 96 genes), and “Coenzyme transport and metabolism” (H; 87 genes). Among the SEED subsystem categories, “Carbohydrates” (181 genes), “Amino Acids and Derivatives” (171 genes), “Protein Metabolism” (142 genes) and “Cofactors, Vitamins, Prosthetic Groups, Pigments” (116 genes) were the most dominant categories (>10% of a total of 1,094 matched SEED subsystem categories). 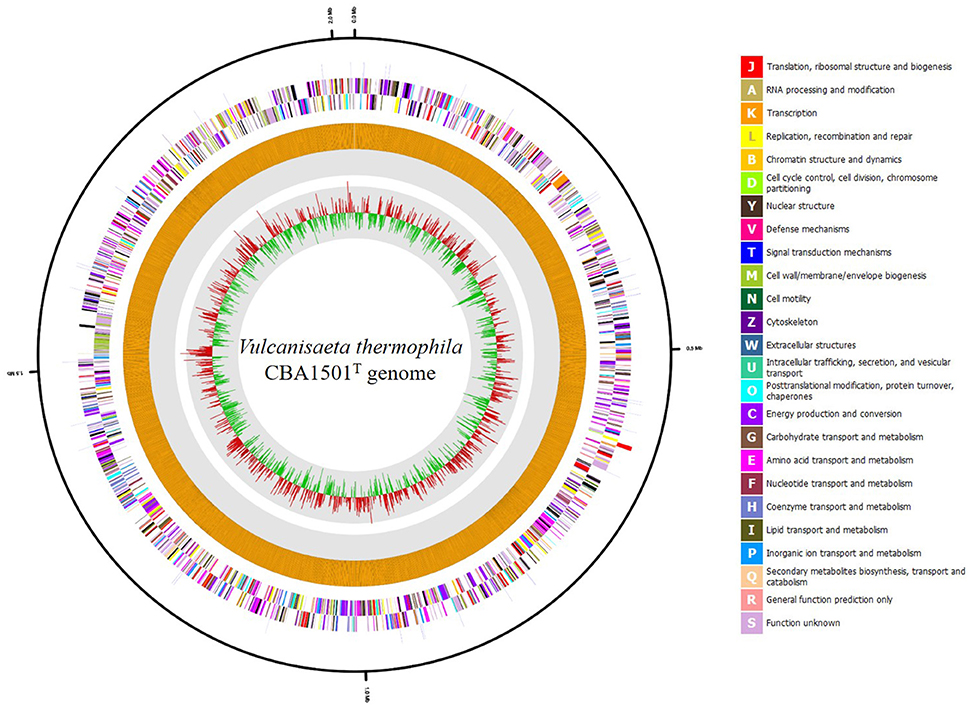 Figure 1. Graphic circular map of the Vulcanisaeta thermophila CBA1501T genome. Outer circle shows genes on the sense and antisense strands (colored according to COG categories), and RNA genes (red, tRNA; blue, rRNA) are shown from the outside of the circle to the center. Inner circles show the GC skew, with yellow and blue indicating positive and negative values, respectively; the GC content is indicated in red and green. This genome map was visualized using CLgenomics 1.52 (Chun Lab Inc.).

V. thermophila CBA1501T had lesser than 73% orthoANI values with all of the related strains in the genus Vulcanisaeta (Supplementary Table 1). In the orthoANI values-based dendrogram, the strain CBA1501T was located as an outgroup to the other related strains in Vulcanisaeta (Supplementary Figure 1B). These results indicate that V. thermophila CBA1501T is evolutionarily distinct from other related strains. The pan-genome analysis showed that 10 genomes in the genus Vulcanisaeta have the core genome, comprised of 979 POGs. In contrast, only the genome of strain CBA1501T had 211 POGs as a singleton. Among these singletons, various enzymes, including arylformamidase, shikimate kinase, formyl-CoA transferase, xanthine dehydrogenase, hydrogensulfite reductase, and amidase, were detected.

In conclusion, the information provided here is useful as the genome of V. thermophila CBA1501T will provide insights into the metabolism of hyperthermophilic archaea and aid in identifying opportunities for biotechnological applications of novel hyperthermophilic enzymes.

This research was supported by the Basic Science Research Program through the National Research Foundation of Korea (NRF) funded by the Ministry of Education, Science, and Technology (2015R1D1A1A09061039), project fund from the Center for Analytical Research of Disaster Science of the Korea Basic Science Institute (C36703).

The Supplementary Material for this article can be found online at: https://www.frontiersin.org/article/10.3389/fmicb.2016.01639

Copyright © 2016 Kim, Yim, Song, Kim, Lee, Kwon, Oh and Roh. This is an open-access article distributed under the terms of the Creative Commons Attribution License (CC BY). The use, distribution or reproduction in other forums is permitted, provided the original author(s) or licensor are credited and that the original publication in this journal is cited, in accordance with accepted academic practice. No use, distribution or reproduction is permitted which does not comply with these terms.