Pseudomonas koreensis, a new nominated Gram-negative bacterium was first reported and isolated from Korean agricultural soil (Kwon et al., 2003). CRS05-R5 (first reported as Pseudomonas sp.), which showed biocontrol ability against Sitophilus oryzae and Acidovorax avenae subsp. avenae (Liu et al., 2014), was first isolated from the rice rhizosphere in Heilongjiang province and reported in 2003 (Xie et al., 2003). Except for that, this species has been reported to produce the biosurfactant, which has biocontrol ability against Phytophthora infestans and Pythium ultimum (Hultberg et al., 2010a,b). These interesting features raise our attention on CRS05-R5. Recently, we sequenced the 16S rRNA sequence from CRS05-R5 and built the phylogenetic tree (Figure S1). Based on that, we confirmed that CRS05-R5 should be classified as P. koreensis. However, only one genome was sequenced (D26) and no detailed analysis was performed on this species. In this case, we did whole-genome sequencing on CRS05-R5, and tried to reveal the possible mechanism behind its antagonistic ability.

Direct Link to Deposited Data and Information to Users

This strain has been deposited in CGMCC with deposit number 1.15630. This genome sequencing project has been deposited at DDBJ/EMBL/GenBank under the Accession Number CP015852. The BioProject designation for this project is PRJNA322127.

The total size of the genome is 5,991,224 bp and has a G+C content of 60.6%. The completeness and contamination of this genome is 99.86% and 0.05% after running the CheckM. These results indicate the high quality of assembled genome. A total of 5352 CDSs were predicted. Of these, 3832 could be assigned to a COG number. The most abundant COG category was “General function prediction only” (581 proteins) followed by “Signal transduction mechanisms” (547 proteins), “Amino acid transport and metabolism” (539 proteins), “Transcription” (448 proteins), and “Function unknown” (302 proteins). In addition, 82 RNAs including rRNA and tRNA were identified. All the genomic information was shown in Table 1. 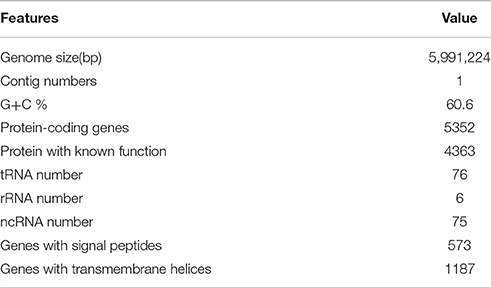 Biosurfactants are amphiphilic compounds produced by microorganisms (Mulligan, 2005). This compound, which is produced by Pseudomonas spp., has been widely used in biocontrol (Debode et al., 2007). In CRS05-R5 genome, more than 800 genes are predicted to be involved in secondary metabolism by comparing with DoBISCUIT database (Ichikawa et al., 2013). Interestingly, we found one gene cluster, which is annotated as cyclic lipopeptides (CLPs), exists in CRS05-R5 (arfABC). CLP is a kind of biosurfactant, and has been proved to be important in antagonistic Pseudomonas sp. (Raaijmakers et al., 2006). This information indicates that CRS05-R5 can be used as biocontrol agent.

Strikingly, we found even the ANI value between CRS05-R5 and P. koreensis D26 is only 92.5% (Figure S3). Also, the highest AF value is only 74.2% (Table S1). Indeed, 631 CDSs were predicted to be unique genes existing in CRS05-R5 genome. These results indicate the huge genome diversity among Pseudomonas strains, which is consistent with previous findings (Loper et al., 2012). Circos result found many unique genes in CRS05-R5 (Figure 1). To better understand the features of these genes, Pseudomonas database was used to deeply annotate these genes (Winsor et al., 2011). Except for a lot of hypothetical proteins, we found one gene cluster encoding fimbrial associated proteins only existing in CRS05-R5 (A8L59_09240–A8L59_09310). These genes have been reported to be critical for the initial stage of biofilm development (Wei and Ma, 2013). Except for this gene cluster, we also found three rhs genes exist as the unique genes in CRS05-R5 (A8L59_00750, A8L59_09890, and A8L59_11585). These genes have been found to be linked to the second type VI secretion cluster in P. aeruginosa (Jones et al., 2014). Also, these genes have been reported to mediate intercellular competition (Koskiniemi et al., 2013). More strikingly, one rhs gene is located in a unique gene cluster (A8L59_11555–A8L59_11600). Although, most of the genes are hypothetical proteins, we may infer that this cluster maybe related with secretions. Indeed, by searching with TMHMM Server v. 2.0, which is a transmembrane helices prediction database (http://www.cbs.dtu.dk/services/TMHMM/), we found that 3 genes (A8L59_11560, A8L59_11565, and A8L59_11600) have predicted transmembrane helices. Since biofilm and intercellular competition are very important for bacterial survival and adaptation, we infer that these genes may confer some fitness advantages for CRS05-R5 on the root of Oryza sativa. Also, we found one unique gene cluster (A8L59_18500–A8L59_18575), which encodes wbpL and other glycosyl transferase. These genes have been confirmed to be important in lipopolysaccharide formation (Rocchetta et al., 1998). These compounds have been proved to be important in plant roots colonization (Duijff et al., 1997) as well as induction of systemic resistance against some plant pathogens (Leeman et al., 1995). All these results strongly indicate the biocontrol potential of CRS05-R5 strain. 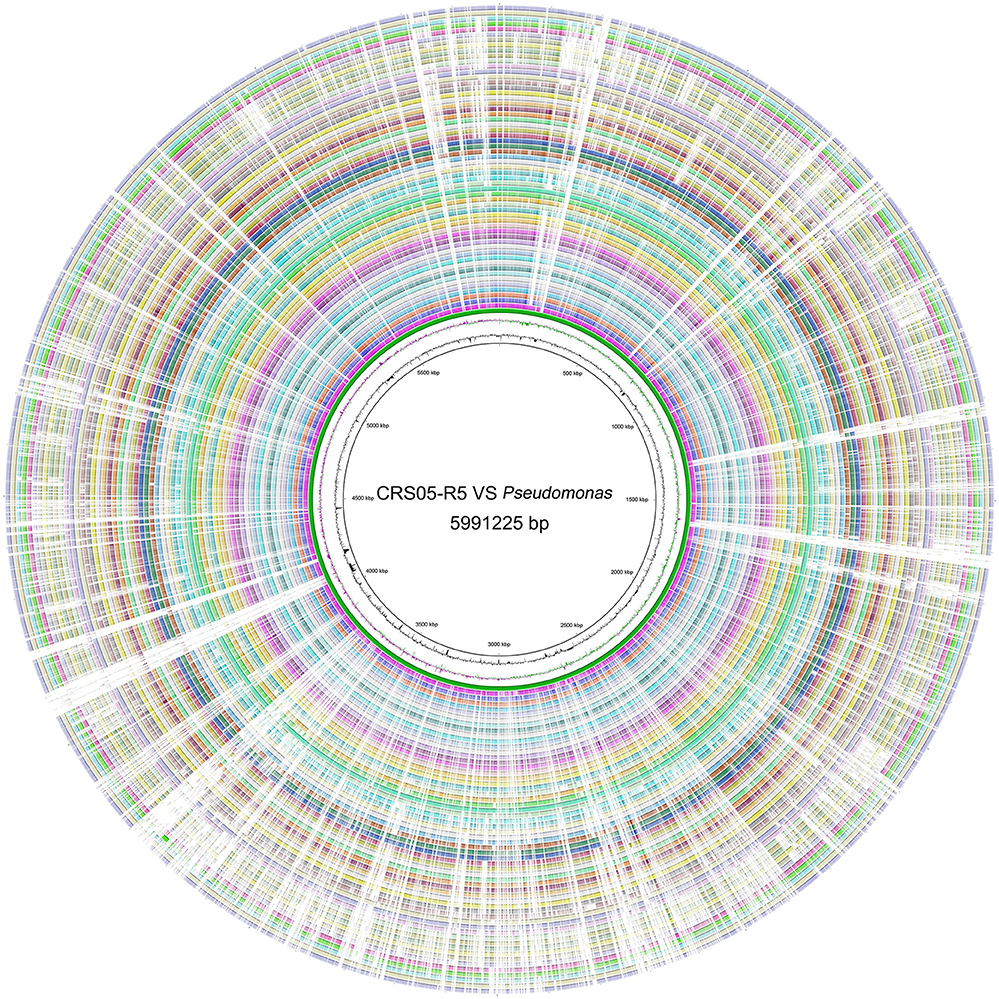 We thank Dr. Weijie Song for sequencing at Biology Technology Company of Guhe.

The Supplementary Material for this article can be found online at: https://www.frontiersin.org/article/10.3389/fmicb.2016.01756/full/full#supplementary-material

Figure S1. Phylogenetic relationships based on 16S rRNA gene sequences were determined by the neighbor-joining method with the program package MEGA 6.0 (Tamura et al., 2013). Bootstrap confidence values were obtained using 1000 resamplings. The tree shows the positions of strains CRS05-R5 and other selected Pseudomonas strains. Numbers at nodes indicate percentages of occurrence in 1000 bootstrapped trees; only values >50% are shown. Bar, 0.005 substitutions per site.

Figure S3. Heatmap of Average Nucleotide Identity (ANI) between CRS05-R5 and all the other sequenced Pseudomonas genomes.

Copyright © 2016 Lin, Hu, Liu, Chen, Ge, Zhu and Guo. This is an open-access article distributed under the terms of the Creative Commons Attribution License (CC BY). The use, distribution or reproduction in other forums is permitted, provided the original author(s) or licensor are credited and that the original publication in this journal is cited, in accordance with accepted academic practice. No use, distribution or reproduction is permitted which does not comply with these terms.