Methods: Patients evaluated for TBM in Shaanxi province, China, were prospectively enrolled from May, 2011 to April, 2013. Cerebrospinal fluid (CSF) specimens were evaluated using the Xpert MTB/RIF® assay, MZN staining, and standard biochemical and microbiological tests, together with detailed clinical and radiological assessment.

Conclusion: Xpert MTB/RIF® offered a rapid and specific TBM diagnosis, but sensitivity was poor. MZN was mainly hampered by false positives. Strategies to enhance the sensitivity of Xpert MTB/RIF® or improve the diagnostic accuracy of MZN should be explored.

Tuberculous meningitis (TBM) represents roughly 1% of all cases of tuberculosis (TB), but it is responsible for a disproportionate burden of TB-associated deaths and disability (Thwaites et al., 2013). Diagnosis of TBM is challenging due to atypical early clinical manifestations and the low sensitivity of smear microscopy on cerebrospinal fluid (CSF) specimens. CSF culture is more sensitive, but takes weeks to yield results and requires sophisticated laboratory facilities (Koh et al., 2012). Because of certain death from untreated TBM, a fast and reliable diagnostic test for TBM is urgently needed.

Modified Ziehl-Neelsen staining (MZN) showed great promise to assist the quick identification of TBM cases. Initial proof-of-concept studies demonstrated greatly improved detection rates, of both extracellular and intracellular mycobacteria, compared to conventional ZN staining (Chen et al., 2012). In a clinical study conducted in China the sensitivity of MZN (82.9%) was found to be significantly higher than conventional ZN staining (3.3%), which had very poor sensitivity (Feng et al., 2014). Since M. tuberculosis is an intracellular pathogen and the numbers of extra-cellular bacteria are few in CSF, the ability to stain intracellular and extracellular bacteria was considered the most likely explanation for the increased sensitivity observed with MZN (Thwaites, 2013). However, more rigorous assessment is required to confirm the diagnostic value of MZN and to assess its performance compared to Xpert MTB/RIF® for rapid TBM diagnosis.

We performed a prospective descriptive study enrolling all suspected TBM patients over a 2 year period (May 2011–April 2013). The study was coordinated from Xijing hospital of the Fourth Military Medical University; the largest medical center in Shaanxi province, China. All tertiary referral hospitals in Shaanxi province (11 in total) participated in the study. Shaanxi province is located in Northwestern China and has a population of 36.7 million people, a TB notification rate of 109/100,000 population (Zhang et al., 2011)1 and a low human immunodeficiency virus (HIV) prevalence (< 1% of TB patients) (Zhao et al., 2014). Patients were eligible for inclusion if they had symptoms of meningitis (fever, headache, seizure, vomiting, nuchal rigidity, or abnormal CSF parameters) and provided written informed consent to participate.

Patients were retrospectively scored according to the British Medical Research Council TBM severity grade (British Medical Research Council, 1948) and classified according to consensus uniform research case definition criteria (Marais et al., 2010), as “definite”, “probable,” or “possible” TBM (Table 1). Since the study aimed to evaluate the diagnostic performance of MZN, MZN was not included in the classification. The “not TBM” category was sub-divided into cases of infectious neurological disorders (IND) and non-infectious neurological disorders (NIND). All patients were tested for HIV (Roche Elecsys HIV Combi, Basel, Switzerland). Additional information was gathered from reviewing relevant clinical notes. Patients were excluded if their clinical data were incomplete or consent for participation was not obtained. 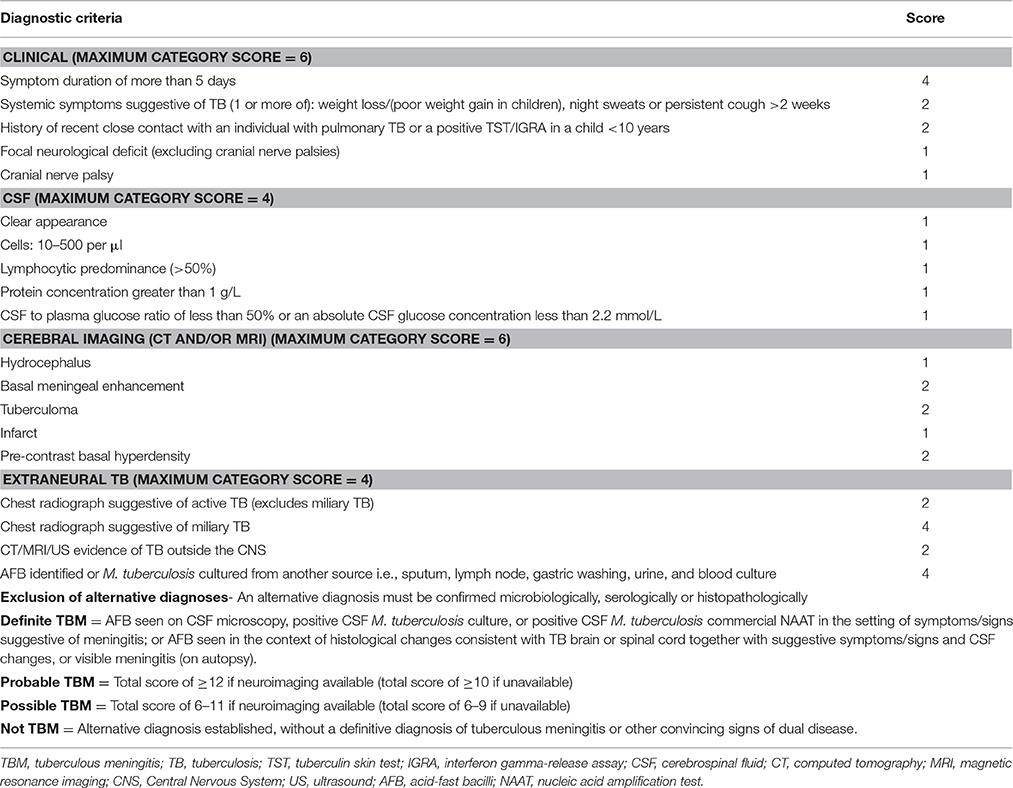 All patients received a lumbar puncture for CSF collection; standard biochemical and microbiological analyses were performed, including India ink staining. CSF M. tuberculosis culture was performed using the MGIT960 system according to standard protocol (Krüüner et al., 2006), depending on availability and the discretion of the treating physician. CSF specimens were sent to Xijing Hospital where MZN was performed by experienced technicians, blinded to all other information. MZN staining used 0.5 ml of CSF loaded into a cytospin chamber with poly-lysine-coated slides and centrifuged at 1000 × g for 5 min. The slide was fixed with 4% paraformaldehyde for 15 min at room temperature then permeabilized with 0.3% TritonX-100 for 30 min, before staining with carbolfuchsin containing 0.3% TritonX-100 and counterstained with methylene blue. All slides stained by the modified method were observed under oil immersion at a magnification of 1000 (Chen et al., 2012). Three hundred fields on each slide were examined documenting the number of fields in which acid fast bacilli were observed, as well as their intra- or extra-cellular location. Positive slides were confirmed by independent review from another technician; 25% of slides were randomly selected for rereading (Feng et al., 2014).

All remaining CSF was stored at −80°C (at most 2 years) and then transferred on dry ice to the National Tuberculosis Reference Laboratory of the Chinese Center for Disease Control and Prevention in Beijing to perform Xpert MTB/RIF® (Cepheid, Sunnyvale, CA, USA) testing using centrifugation (1000 rpm for 10 min) of CSF volumes (median: 1 mL, range: 1–2 mL), according to standard protocol (Boehme et al., 2010). All tests were performed by experienced technicians who were blinded to the patients' diagnostic results.

In total, 334 patients were included in the study, but 18 patients had to be excluded due to incomplete data (n = 10) or inadequate consent (n = 8). (Figure 1) Of the 316 patients included in the analysis, 38 (12.0%) were classified as definite TBM, 66 (20.9%) as probable TBM, and 163 (51.6%) as possible TBM. Of the 49 (15.5%) cases with an alternative diagnosis that were classified as “not TBM,” 38 (77.6%) had an infectious and 11 (22.4%) a non-infectious cause. The infectious disease (IND) group included bacterial meningitis (n = 11), cryptococcal meningitis (n = 18), and 9 cases of aseptic meningitis. The non-infectious disease (NIND) group included meningioma (n = 3), Guillain-Barre syndrome (n = 2), cerebral hemorrhage (n = 2), acute lymphoblastic leukemia (n = 1), acute non-lymphocytic leukemia (n = 1), non-Hodgkin lymphoma (n = 1), and obstructive hydrocephalus (n = 1). Three cases with alternative diagnoses (2 meningioma, 1 acute non-lymphocytic leukemia) tested positive by both MZN and Xpert MTB/RIF®; they were classified as “definite” TBM cases and received standard anti-TB treatment (isoniazid, rifampicin, pyrazinamide, ethambutol). 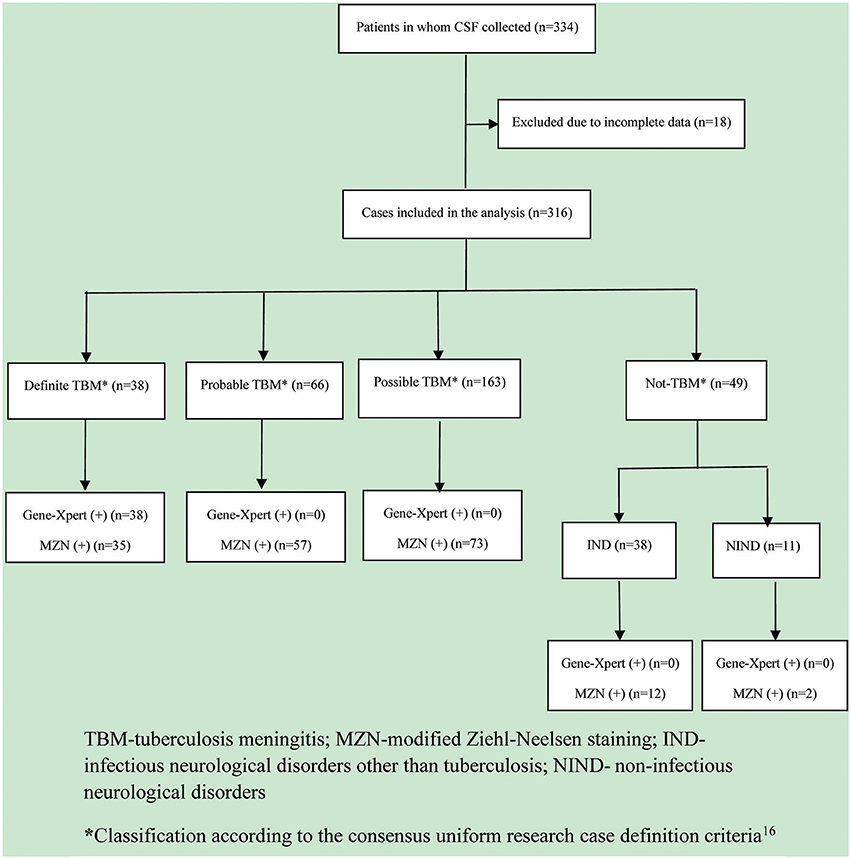 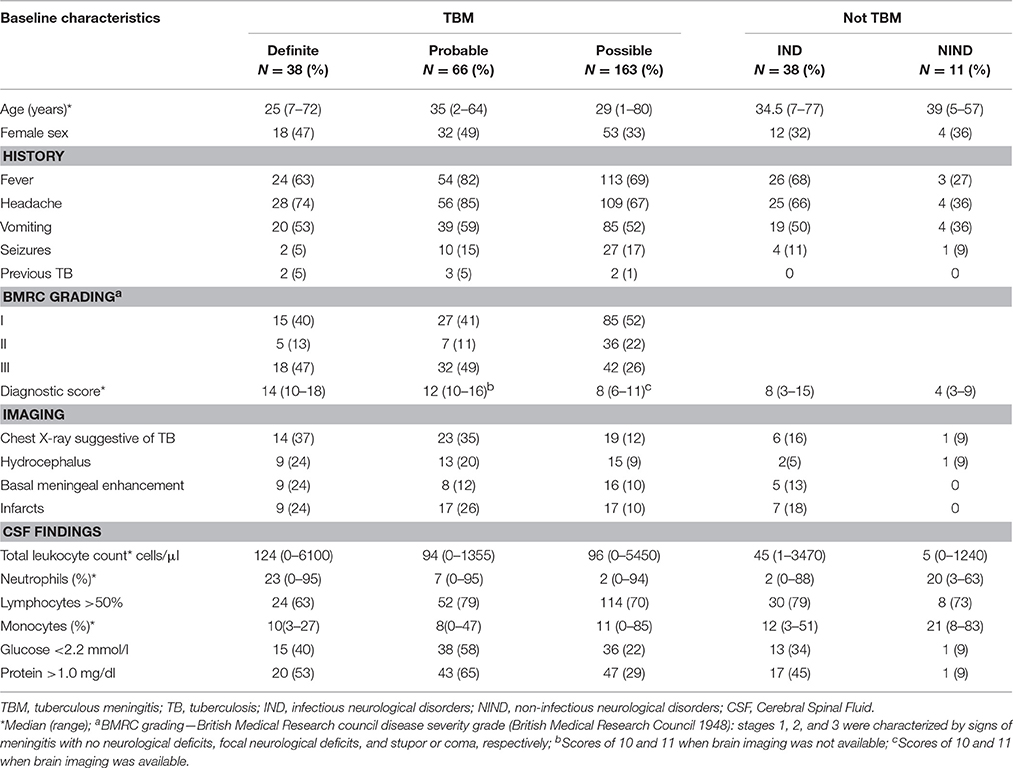 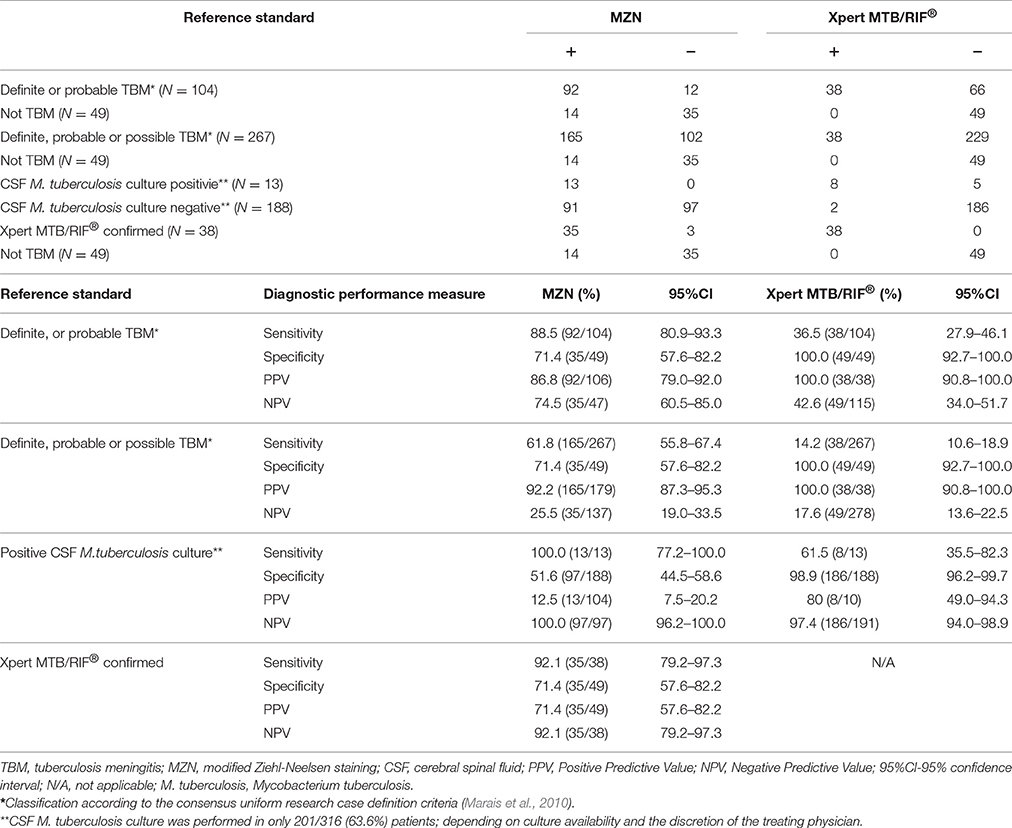 MZN was positive in 14 (28.6%) patients classified as “not TBM.” Table 4 summarizes the clinical profile and outcome of patients in whom a “false positive” MZN test result was recorded. Alternative diagnoses established included cryptococcal (6 cases) and bacterial (6 cases) meningitis, meningioma (1 case) and acute lymphoblastic leukemia (1 case). One patient with cryptococcal meningitis died, but all other patients achieved good outcomes despite only 4/13 (30.7%) receiving anti-tuberculosis treatment. The patient who died had highly elevated intra-cranial pressure and rapidly progressive disease attributed to cryptococcal meningitis. Although the CSF was MZN positive, the Xpert MTB/RIF® test was negative and there was no suggestion of extra-neural TB; no CSF culture was performed and no anti-tuberculosis treatment provided.

Table 4. Clinical profile, treatment and outcome of 14 patients with positive MZN staining of their cerebrospinal fluid classified as “not TBM”.

MZN previously demonstrated excellent sensitivity (100%) and good specificity (85.1%) compared to culture-confirmed TBM as the reference standard, suggesting value as a rapid screening test (Feng et al., 2014). However, in the current study MZN results suggested a high number of false positives, with only 12.5% of cultured MZN positive CSF specimens confirmed as M. tuberculosis and 28.6% of “not TBM” patients found to be MZN positive. MZN specificity was 71.4% compared to Xpert MTB/RIF® as the reference standard. The fact that a large number of patients who were not “confirmed or probable” TBM cases were MZN positive is a concern, since false positive tests may lead to unnecessary and inappropriate treatment. This is particularly true for the “not TBM” cases in whom an alternative diagnosis was established; most of whom recovered without anti-tuberculosis treatment. Although, many of these patients received short courses of ceftriaxone and/or meropenem, which may have some anti-tuberculosis activity, there is no ancillary evidence to support the positive MZN result and it is highly unlikely that the sub-optimal treatment received would have resulted in cure if these patients had TBM.

The poor specificity observed with MZN could be explained by superior sensitivity compared to the reference standard, but this is unlikely to apply to the clinical reference standard used, given that only “definite and probable TBM” and “not TBM” cases were included in the comparative analysis. Nontuberculous mycobacteria (NTM) may also explain discrepant MZN and Xpert MTB/RIF® results (Menzies and Nahid, 2013), but NTM is an exceedingly rare cause of meningitis (Lawn and Zumla, 2011) and no NTM was identified in any of the samples that grew mycobacteria. Artifacts produced during MZN staining may have been misidentified as mycobacteria, since the technique often distorts the typical appearance of acid-fast bacilli (Chen et al., 2012). Although highly experienced laboratory technicians performed the staining and interpreted the results, the technique may benefit from careful optimization. In general, the positive predictive value of MZN was lower than that of Xpert MTB/RIF®, but the negative predictive value was higher indicating potential value as a preliminary screening test. However, the fact that MZN had a sensitivity of 92.1% compared to Xpert MTB/RIF® limits its use as a rapid screening test in its current format, given fears of potential false negative results.

Study limitations include the fact that M. tuberculosis culture was performed on a minority of patients. M. tuberculosis culture would have had particular value in potentially false positive MZN cases that tested negative on Xpert MTB/RIF®. The absence of an optimal reference standard that is inclusive of all “true TBM” cases remains problematic and hampers diagnostic test development. Given the current limitations, assessing the diagnostic performance of new tests against multiple reference standards, as done in our study, represents the most rigorous approach. There is a huge need for a triage test with high sensitivity that could rapidly screen potential TBM cases. Despite good sensitivity, the fact that some Xpert MTB/RIF® positive cases were MZN negative is a major concern. Once MZN methodology has been reviewed and optimized it should be re-evaluated in a large prospective study with well characterized patient groups, to specifically explore it value as a rapid, sensitive triage test.

A positive CSF Xpert MTB/RIF® result provides a rapid and specific TBM diagnosis, but poor sensitivity is a major constraint. MZN is hampered by likely false positives and sub-optimal specificity. Given its increased sensitivity compared to Xpert MTB/RIF®, MZN could be considered as a rapid triage test, but potential false negative results require further evaluation. Strategies to enhance the sensitivity of Xpert MTB/RIF® or improve the diagnostic accuracy of MZN should be explored.

GZ, YZ were responsible for the design of the study. TW, YY, WD, and YP performed the experiments. TW, LFZ, and JY provided specimens and participated in transportation of strains. TW, LZ participated in medical records and specimen collection. The data were analyzed by TW, YP, and GF, with input from BM, YZ, GZ, GF, and LPZ. TW wrote the first draft of the manuscript. All authors commented on the manuscript revisions and approved the final version.

We sincerely thank the clinical and laboratory staff of Xijing Hospital, CDC and all the district hospitals for their assistance with patient recruitments, isolates collection and identification. We also thank all of the patients who took part in our study.

Copyright © 2016 Wang, Feng, Pang, Yang, Dai, Zhang, Zhou, Yang, Zhan, Marais, Zhao and Zhao. This is an open-access article distributed under the terms of the Creative Commons Attribution License (CC BY). The use, distribution or reproduction in other forums is permitted, provided the original author(s) or licensor are credited and that the original publication in this journal is cited, in accordance with accepted academic practice. No use, distribution or reproduction is permitted which does not comply with these terms.

Polymicrobial etiologies of disease: models and perspectives on basic and clinical research.