Stimulator of interferon genes (STING) is a critical signaling molecule in the innate immune response against DNA viruses by either directly sensing intracellular DNA or functioning as an adaptor molecule to activate the type I interferon (IFN) signaling pathway. We determined the functional interaction between STING and human cytomegalovirus (HCMV). A cDNA library containing 133 HCMV ORFs was screened to identify viral genes that inhibit STING-induced IFN-β promoter activation. Among the screened ORFs, UL122, which encodes the immediate-early 2 86 kDa (IE86) protein, strongly abolished STING-induced IFN-β promoter activation. Interestingly, IE86 protein facilitated the proteasome-dependent degradation of STING and inhibited 2′3′-cGAMP-mediated induction of IFNB1 and CXCL10. Taken together, this study demonstrates the existence of a post-translational regulation of STING by HCMV IE86 protein.

STING is regulated by its dimerization, translocation from the endoplasmic reticulum (ER) through the Golgi to the perinuclear location and post-translational modifications such as phosphorylation or ubiquitination (reviewed in Burdette and Vance, 2013). STING has been proposed to function as a direct DNA sensor for cyclic dinucleotides generated by cyclic GMP-AMP synthase (cGAS) (Burdette et al., 2011; Ablasser et al., 2013) or an adaptor protein that is activated by several DNA sensors including interferon-gamma-inducible protein 16 (IFI16) and DExD/H-box helicase 41 (DDX41) upon infection with DNA viruses such as herpes simplex virus 1 (HSV-1), Kaposi’s sarcoma-associated herpesvirus (KSHV), human papillomavirus (HPV), adenovirus and HCMV (reviewed in Ma and Damania, 2016).

Although STING plays a pivotal role in DNA virus infection-induced innate immune responses, a regulatory mechanism(s) for STING employed by HCMV protein(s) has not been extensively elucidated. Other viruses have been reported to employ effective mechanisms to counteract the STING pathway (reviewed in Ma and Damania, 2016). For example, HSV-1 ICP27 protein interacts with the STING-TBK1 complex and inhibits type I IFN expression (Christensen et al., 2016), and STING KD in cells derived from normal tissues results in higher HSV-1 titer (Kalamvoki and Roizman, 2014). During the course of HCMV infection, protein levels of several signaling components in the type I IFN pathway including STING are gradually down-regulated (Weekes et al., 2014). A recent study indicates that HCMV tegument protein UL82 inhibits the STING signaling pathway (Fu et al., 2017). It was proposed that UL82 protein interacts with STING and iRhom2, disrupts the STING-iRhom2-TRAPβ complex and inhibits the trafficking of STING from the ER to the perinuclear region (Fu et al., 2017).

Proteasome inhibitors, MG132 and epoxomicin, and their vehicle DMSO were purchased from EMD Millipore. Lysosome inhibitor, chloroquine, and cycloheximide were purchased from Sigma–Aldrich and Fisher Scientific, respectively. Cyclic [G(2′5′)pA(3′5′)p] (2′3′-cGAMP) was purchased from InvivoGen. OmicsfectTM for transient transfection was used according to the manufacturer’s directions (Omics Biotechnology). The luciferase assay was performed as described previously (Bari et al., 2011).

Yeast AH109 (MATa) cells were transformed with plasmid (Trp+) expressing the GAL4-DNA-binding domain (DBD)-STING fusion protein. Y187 (MATa) cells were transformed with plasmid (Leu+) expressing the GAL4-activation domain (AD)-HCMV ORF fusion proteins. Transformants were selected on plates lacking tryptophan or leucine. Trp+ and Leu+ transformants were mated with each other on complete YPD plates and diploid cells (a/α) were selected on plates lacking both tryptophan and leucine. Cells expressing bait and prey that interact with each other grow on plates that lack tryptophan, leucine, and histidine and express β-galactosidase. Cells expressing GAL4-DBD-STING and GAL4-AD only were used as a negative control. For rapid in site assays for β-galactosidase production, a 5-bromo-4-chloro-3-indolyl-β–galactopyranoside (X-Gal) filter assay was used. For quantitative assays, β-galactosidase production was measured using o-nitrophenyl-β–galactopyranoside (ONPG) assays. Yeast strains, media for yeast growth, methods for yeast transformation, and β-galactosidase assays were all as described previously (Ahn et al., 2001).

Effect of STING on HCMV Replication in HFF Cells

To quantitatively analyze the level of HCMV replication in HFF cells stably transduced with pLKO.1-STING shRNA, cells were infected with the HCMV-Towne at low (0.1 pfu/cell) or high (1 pfu/cell) multiplicity of infection (MOI), and the relative amount of viral DNA was measured by qPCR using primers specific for UL123 at 5 days after infection. In STING KD HFF cells, HCMV replication was significantly increased by 2.9-fold at low MOI and 3.4-fold at high MOI compared with control cells (Figure 1C). 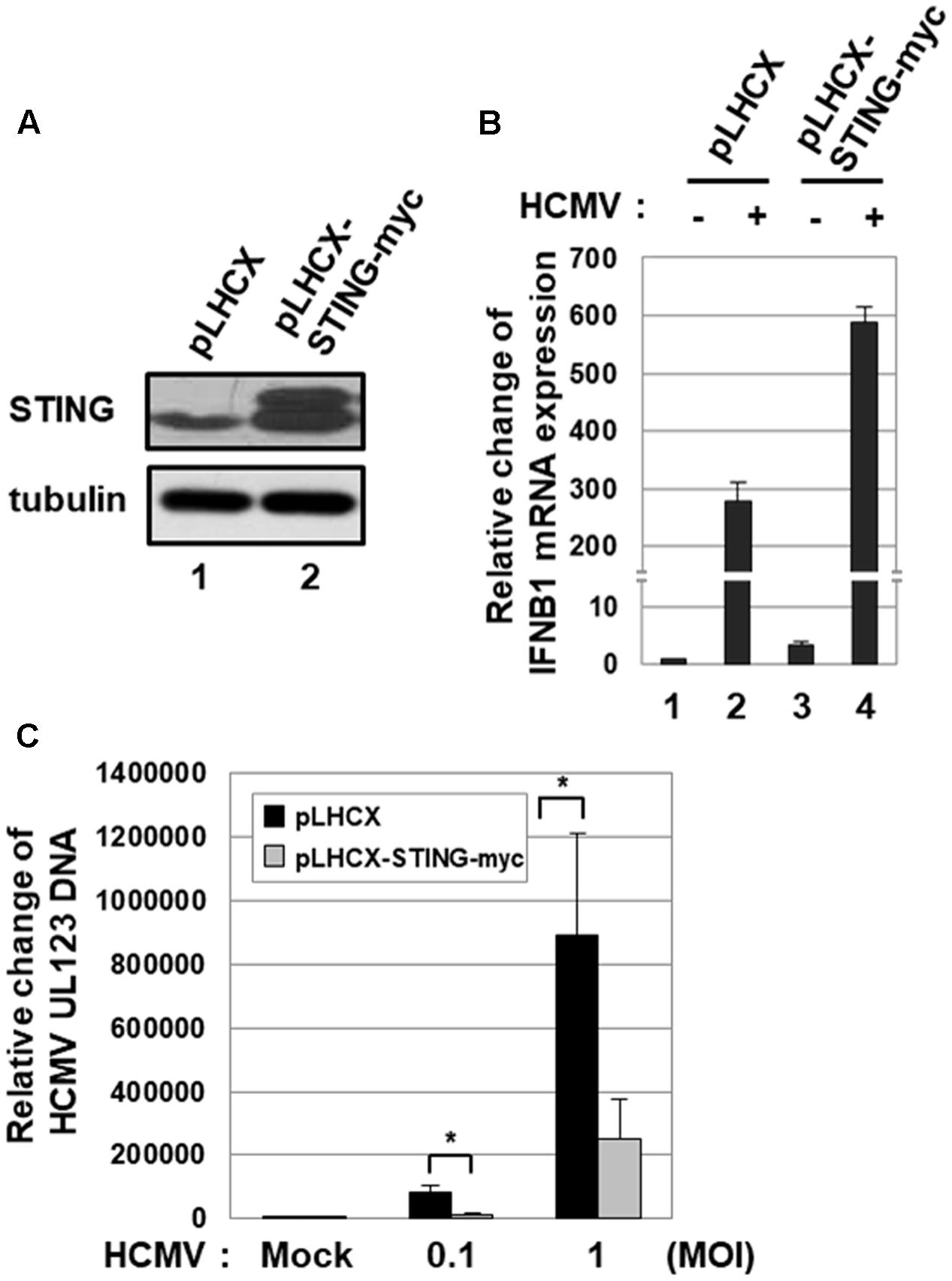 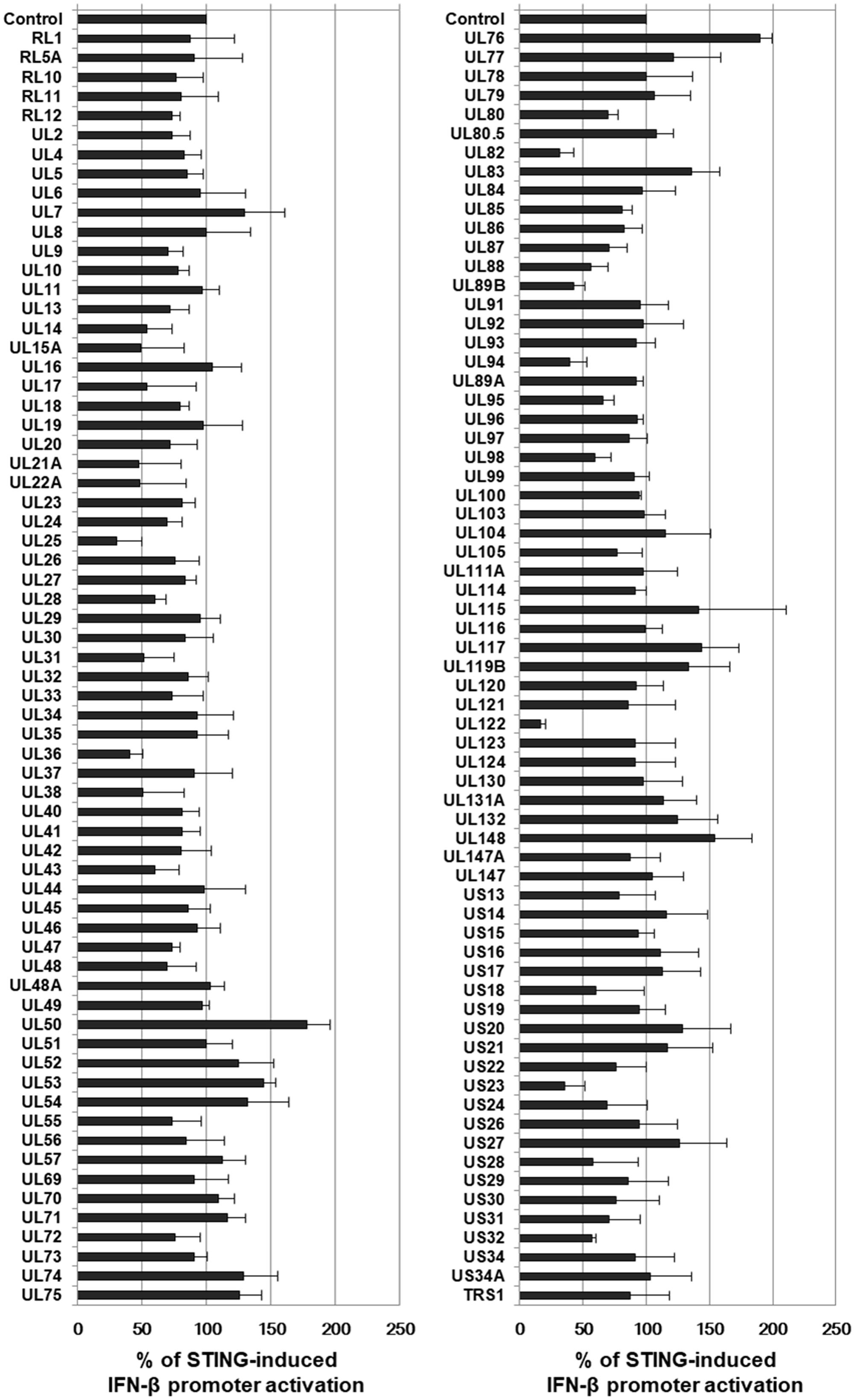 FIGURE 4. Interaction of STING with HCMV proteins in yeast two-hybrid interaction assay. (A) The ability of cells expressing GAL4-DBD-STING and GAL4-AD-HCMV ORF to produce β-galactosidase was assessed using X-gal filter assays. (B) The levels of β-galactosidase produced in yeast cell lysates were also quantitatively measured using ONPG as a substrate.

To determine whether IE86 protein induces STING degradation via a proteasome- or lysosome-dependent pathway, cells were treated with either proteasome inhibitors, MG132 and epoxomicin, or a lysosome inhibitor, choloroquine (Figure 6A). Both MG132 or epoxomicin treatment restored the level of STING protein in Ad-IE86-transduced cells similar to that in Ad-GFP-transduced cells, indicating that IE86 induces proteasome-dependent degradation of STING protein (Figure 6A, compare lanes 5 and 6 with 4). Although microtubule-associated protein light chain 3 (LC3) isoform B (LC3B) was significantly accumulated in cells treated with chloroquine, the level of STING protein was restored to a lesser extent than in cells treated with proteasome inhibitors (Figure 6A, compare lane 10 with 9). Thus, IE86 protein induces STING degradation mainly via a proteasome-dependent pathway. 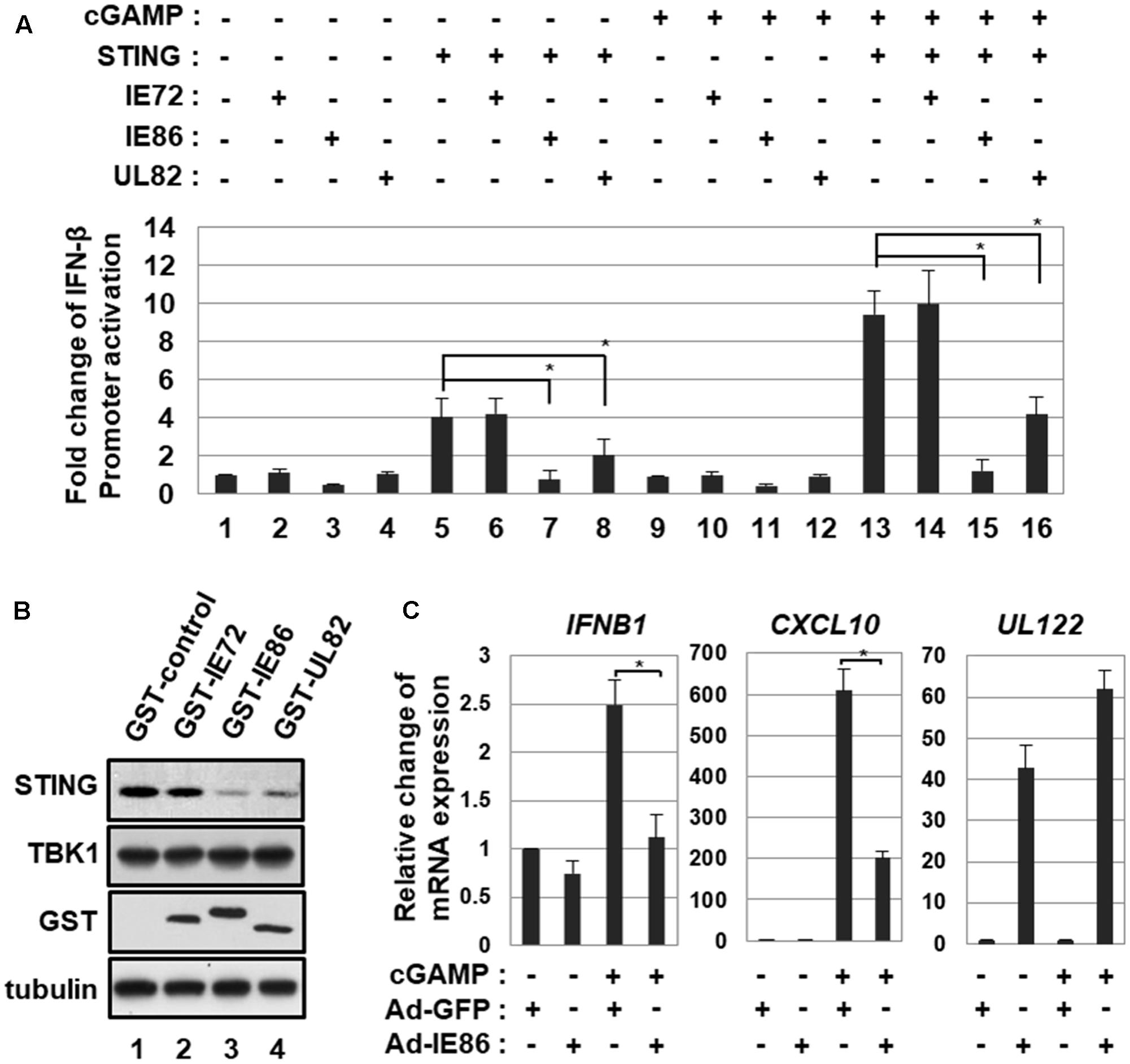 FIGURE 7. HCMV IE86 protein interferes with 2′3′-cGAMP-induced signaling pathway. (A) HEK293T cells were co-transfected with small amounts of vectors expressing STING and control renilla luciferase reporter and IFN-β promoter-driven firefly luciferase reporter plasmids plus the expression vector for IE72, IE86 or UL82. At 18 h after transfection, cells were treated with a STING agonist, 2′3′-cGAMP, and IFN-β promoter-driven luciferase activities were determined at 12 h after treatment. (B) HEK293T cells were transfected with the vector expressing STING plus the expression vector for GST, GST-IE72, GST-IE86 or GST-UL82. At 24 h after transfection, cells were harvested, and equal amounts of cell extracts were subjected to western blot analysis with antibodies to STING, TBK1, GST and tubulin. (C) HFF cells were transduced with 10 pfu per cell of either Ad-GFP plus Ad-Trans or Ad-IE86 plus Ad-Trans. At 48 h after transduction, cells were treated with 2′3′-cGAMP, and relative amounts of IFNB1, CXCL10 and UL122 transcripts were measured using qRT-PCR at 12 h after treatment. The data shown here represent three independent experiments ±SD. The asterisk (∗) denotes a significant difference between samples, which was determined by the P-value of a two-sample t-test (P < 0.05).

To ascertain the effect of IE86 protein-mediated degradation of STING protein on STING-induced signaling pathway, HEK293T cells were transfected with the vector expressing STING or Toll/IL-1 receptor (TIR)-domain-containing adaptor-inducing IFN-β (TRIF), and TBK1 phosphorylation at serine 172, indicative of TBK1 activation, was determined (Figure 8A). In HEK293T cells, overexpression of STING or TRIF protein induced phosphorylation of TBK1 at serine 172 (Figure 8A, compare lanes 3 and 5 with 1). IE86 protein had no effect on both the level of TRIF protein and TRIF-induced TBK1 activation (Figure 8A, compare lanes 6 with 5). However, the level of STING protein and STING-induced TBK1 activation were significantly reduced in cells expressing IE86 protein (Figure 8A, compare lane 4 with 3). 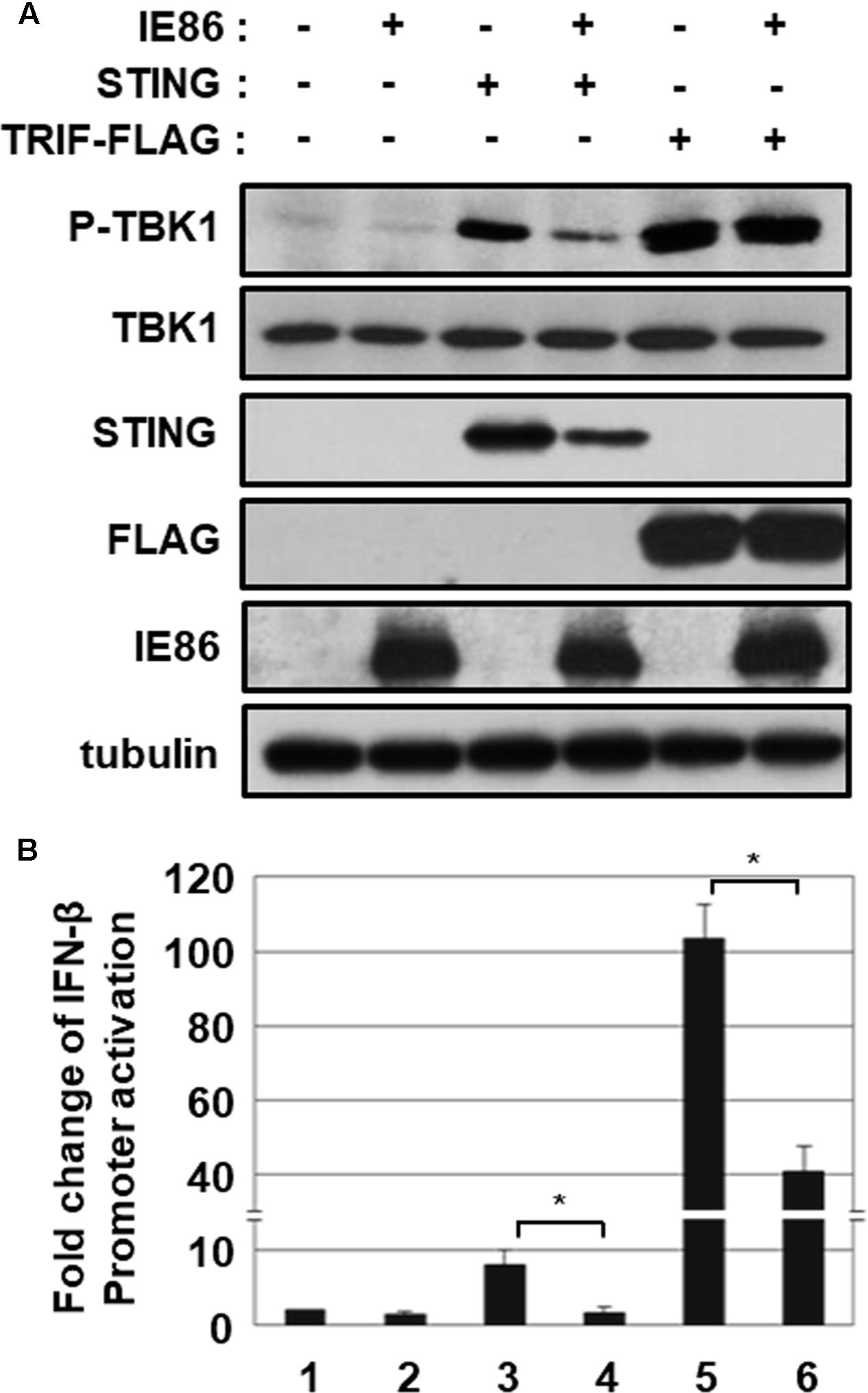 Determination of the IE86 Protein Residues Responsible for STING Degradation

In HFF cells stably transduced with pLKO.1-STING shRNA, the HCMV titer was increased 4.3-fold (Figure 1A), whereas STING KD exhibited more profound effect on HCMV infection in HUVEC cells (9.9-fold increase in viral titer at 7 days after infection) (Lio et al., 2016). These discrepancies may be explained by the different infection efficiency and/or methods used to KD STING (CRISPR/Cas9 versus shRNA). In addition, other antiviral signaling pathways and/or restriction factors including IFI16 may also contribute to the inhibition of HCMV replication in HFF cells.

Initially, we decided to study HCMV UL122 encoding IE86 protein because it (i) reduced STING-induced IFN-β promoter activation most effectively among the screened HCMV ORF (Figure 3) and (ii) strongly interacted with STING in the yeast two hybrid screening to identify STING-interacting HCMV ORFs (Figure 4). Given the fact that IE86 protein is predominantly localized in the nucleus, it was unexpected that IE86 protein interacts with STING in the yeast two-hybrid assay. In addition, we were unable to determine the interaction between IE86 and STING in HCMV-infected HFF cells with or without MG132 treatment (data not shown). Since MG132 affects the MIE promoter and/or may induce adverse effects on cells (DeMeritt et al., 2004), it is still unclear whether STING directly binds to IE86 during HCMV infection.

Copyright © 2017 Kim, Kim, Stinski, Ahn and Song. This is an open-access article distributed under the terms of the Creative Commons Attribution License (CC BY). The use, distribution or reproduction in other forums is permitted, provided the original author(s) or licensor are credited and that the original publication in this journal is cited, in accordance with accepted academic practice. No use, distribution or reproduction is permitted which does not comply with these terms.