We determined the in vitro susceptibility of four aminoglycosides, which are not of the 4,6-disubstituted deoxystreptamine (DOS) subclass against a collection of carbapenem-resistant Enterobacteriaceae (CRE). CRE clinical strains (n = 134) were collected from multiple hospitals in China and carried blaNDM (blaNDM−1, blaNDM−5 or blaNDM−7; n = 66), blaKPC−2 (n = 62) or blaIMP−4 (n = 7; including one carrying blaNDM−1 and blaIMP−4). MICs of neomycin, paromomycin, streptomycin and apramycin as well as three 4,6-disubstituted DOS aminoglycosides (amikacin, gentamicin and tobramycin) were determined using the broth microdilution with breakpoints defined by the Clinical Laboratory Standards Institute (for amikacin, gentamicin and tobramycin), US Food and Drug Administration (streptomycin), the National Antimicrobial Resistance Monitoring System (apramycin) or la Société Française de Microbiologie (neomycin and paromomycin). Apramycin-resistant strains were subjected to whole genome sequencing using Illumina X10 platform. Among CRE strains, 65.7, 64.9, 79.1, and 95.5% were susceptible to neomycin (MIC50/MIC90, 8/256 μg/ml), paromomycin (4/>256 μg/ml), streptomycin (16/256 μg/ml) and apramycin (4/8 μg/ml), respectively, while only 55.2, 28.4, and 35.1% were susceptible to amikacin (32/>256 μg/ml), gentamicin (128/>256 μg/ml) and tobramycin (64/>256 μg/ml), respectively. Six CRE strains including five Escherichia coli of different sequence types and one Klebsiella pneumoniae were resistant to apramycin and the apramycin-resistant gene aac(3)-IVa was detected in all of these strains. In conclusion, neomycin, paromomycin, streptomycin and apramycin retain activity against most CRE strains. Although none of these non-4,6-disubstituted DOS aminoglycosides are suitable for intravenous use in human at present, these agents warrant further investigations to be used against CRE infections.

MICs of aminoglycosides (amikacin, gentamicin, tobramycin, apramycin, neomycin, paromomycin, and streptomycin), ciprofloxacin, imipenem, meropenem, piperacillin-tazobactam and trimethoprim-sulfamethoxazole were determined using broth microdilution following the recommendations of the Clinical Laboratory Standards Institute (CLSI) (CLSI, 2017). Concentrations of these agents ranged from 0.5 to 256 μg/ml except for trimethoprim-sulfamethoxazole. Escherichia coli ATCC 25922 was used as the quality control and all tests were performed in triplicate. Breakpoints defined by CLST for amikacin, gentamicin and tobramycin (for amikacin, susceptible [S] ≤16 μg/ml, intermediate [I] 32 μg/ml, resistant [R], ≥64 μg/ml; for gentamicin and tobramycin, S ≤4 μg/ml, I 8 μg/ml, R ≥16 μg/ml), ciprofloxacin, imipenem, meropenem, piperacillin-tazobactam and trimethoprim-sulfamethoxazole (CLSI, 2017) was used, while no CLSI- or the European Committee on Antimicrobial Susceptibility Testing (EUCAST)-defined breakpoints for the other four agents are available. Breakpoints defined by US Food and Drug Administration (FDA) or the National Antimicrobial Resistance Monitoring System were used for streptomycin (S, ≤32 μg/ml; R, ≥64 μg/ml) and apramycin (S, ≤8 μg/ml; I, 16 or 32 μg/ml; R, ≥64 μg/ml) (Smith and Kirby, 2016), respectively. Those defined by Comite de L'Antibiogramme de la Société Française de Microbiologie (http://www.sfm-microbiologie.org/) were used for neomycin and paromomycin (S, ≤8 μg/ml; R, >16 μg/ml; for both agents).

All 134 strains were confirmed as CRE as they were non-susceptible to imipenem and meropenem (MICs for both, 2 to >256 μg/ml). The 134 CRE strains included 1 Citrobacter freundii, 2 Citrobacter koseri, 13 Enterobacter cloacae, 25 E. coli, 1 Klebsiella mobilis (previously known as Enterobacter aerogenes), 3 Klebsiella oxytoca, 86 Klebsiella pneumoniae and 3 Raoultella ornithinolytia (Table 1). All of these CRE strains carried one or two carbapenemase-encoding genes, including blaKPC−2 in 62 strains, blaNDM−1 in 33, blaNDM−5 in 32, blaNDM−7 in 1 and blaIMP−4 in 7 with one E. cloacae carrying both blaNDM−1 and blaIMP−4 (Table 1).

Table 1. CRE strains and carbapenemase genes in the present study. 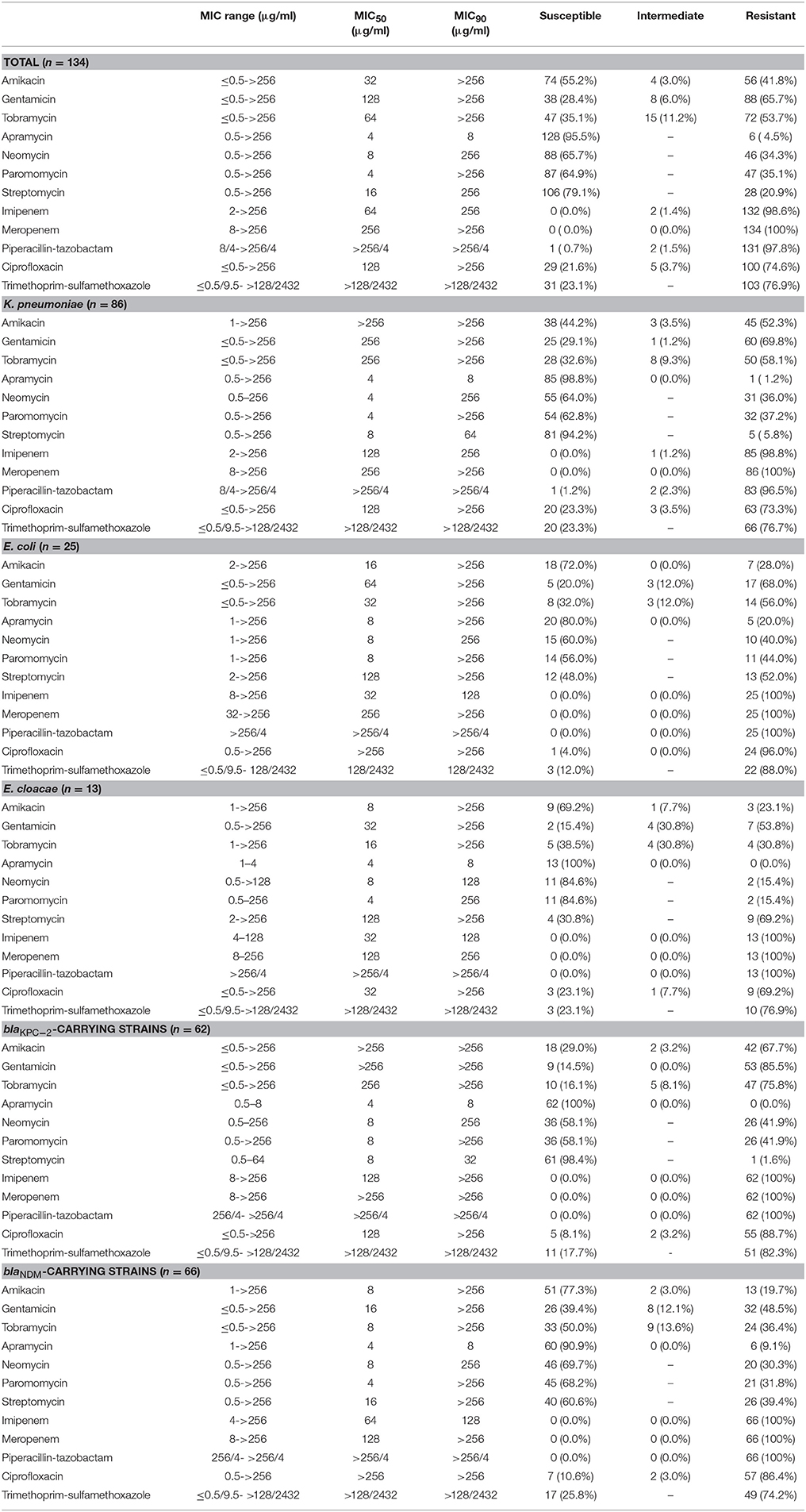 Neomycin is not given via injection due to its nephrotoxicity, while paromomycin is on the List of Essential Medicines of World Health Organization (World Health Organization, 2015) and is used to a number of parasite infections such as amebiasis and giardiasis by oral or intramuscular injection. Both neomycin and paromomycin are poorly absorbed when taken orally. Nonetheless, oral administration of neomycin has been used for inhibiting the overgrowth of gut microflora (Clark, 1977) and for decolonizing the intestinal carriage of extended-spectrum β-lactamase(ESBL)-producing Enterobacteriaceae (Huttner et al., 2013). Paromomycin has also been applied for decolonizing ESBL-producing Enterobacteriaceae (Buehlmann et al., 2011; Rieg et al., 2015). As both agents are not given by intravenous injection, they are unlikely to be used for treating systematic infections caused by CRE. However, our results suggest that neomycin and paromomycin deserve further investigations to be used enterally and to be modified to reduce their nephrotoxicity.

The vast majority of CRE strains were susceptible to apramycin, suggesting the excellent in vitro activity against CRE. A previous study has found that 70.8% of 71 CRE clinical strains collected in USA were susceptible to apramycin (Smith and Kirby, 2016), while in another study 80 of 82 (97.6%) CRE clinical isolates, most of which were collected in UK, were susceptible to apramycin (Livermore et al., 2011a). These findings suggest that the excellent activity of apramycin against CRE is not geographically restricted. Unfortunately, apramycin is a veterinary agent and has not been approved for clinical use, which is likely due to its narrow therapeutic index (Livermore et al., 2011a). The use of aminoglycosides has been limited by its toxicity, particularly nephrotoxicity and ototoxicity. However, apramycin has low ototoxicity (Matt et al., 2012) and fewer nephrotoxic side effects (Kostrub et al., 2009; Kang et al., 2017) as it appears to have higher affinity to bacterial over mitochrondrial ribosomes (Perzynski et al., 1979; Kang et al., 2017). In clinical settings, aminoglycosides are commonly used in combination with other antimicrobial agents, particularly β-lactams and sometimes fluoroquinolones. There are no data about the combination of these non-4,6-disubstituted DOS aminoglycosides with other agents against CRE at present. Nonetheless, in animal models the combination of apramycin and a fluoroquinolone (enrofloxacin) shows synergic effect to increase the efficacy against Gram-negative bacilli such as E. coli and Salmonella and is also able to decrease the emergence of mutational resistance to fluoroquinolones (Randall et al., 2016). Apramycin therefore warrants further investigations as a repurposed agent against CRE. The unusual structure of apramycin also provides a scaffold for further modification to generate new potent and safe compounds for treating CRE infections (Livermore et al., 2011a).

Copyright © 2017 Hu, Liu, Zhang, Feng and Zong. This is an open-access article distributed under the terms of the Creative Commons Attribution License (CC BY). The use, distribution or reproduction in other forums is permitted, provided the original author(s) or licensor are credited and that the original publication in this journal is cited, in accordance with accepted academic practice. No use, distribution or reproduction is permitted which does not comply with these terms.