An infectious disease characterized with short bills and protruding tongues has attacked to meat ducks in China since March 2015, which has caused ducks poor growth and enormous economic losses to duck industry of China. It was eventually proved to be caused by parvovirus after pathogen isolation and identification. As the genomic sequence analysis showed, this pathogen shared 90.8–94.6% of nucleotide identity with goose parvovirus (GPV), and it was called duck-origin novel goose parvovirus (N-GPV). In this study, a quantitative loop-mediated isothermal amplification (qLAMP) assay was developed for the rapid diagnosis of N-GPV. A set of four specific primers, two inner and two outer, were designed targeting at VP3 gene, which could be completed within 60 min at 65°C in water bath or on a real-time PCR instrument for quantitative analysis. Specificity test of LAMP assay showed that there was no cross-reactivity between N-GPV and other duck pathogens, and the detection limit of qLAMP assay was 1.0 × 102 copies/μL. The repeatability of this method was confirmed by inter-assay and intra-assay tests with variability ranging from 0.74 to 2.25%. The results have indicated that the qLAMP assay was a simple, rapid, accurate, sensitive, and specific method for detecting N-GPV, especially on field detection.

Waterfowl parvovirus causes high morbidity and mortality in geese and Muscovy ducks, and mortality rate ranges from 10 to 80%. These diseases can lead to enteric symptoms, watery diarrhea, prostration, and growth retardation, thus resulting in serious economic losses to waterfowl industry (Glávits et al., 2005). In 2015, a disease, which emerged in France and Poland in the early 1970s in mule and Muscovy ducks was first reported in Chinese mainland (Chen et al., 2015). It mainly caused short beak, protruding tongues, fragile tibia and pteroid, and growth retardation to commercial ducks. The morbidity rate ranges from 10 to 30%, and even up to 50%, thereby resulting in enormous economic losses to duck industry of China. In order to identify the exact pathogen that caused this disease, pathogen isolation and identification and genomic sequence analysis were carried out. Isolated pathogen was detected by polymerase chain reaction (PCR) assay, and the result showed that only GPV was positive; Genomic sequence analysis showed that this new pathogen shared 90.8–94.6% of nucleotide identity with goose parvovirus (GPV). These two studies above indicated that this new pathogen shared higher homology with other GPV strains. Therefore, it was called duck-origin novel goose parvovirus (N-GPV) (Chen et al., 2016). In common with other waterfowl parvovirus, N-GPV was also a member of the Parvoviridae family with a single-stranded DNA genome, and has a small, nonenveloped, icosahedral capsid packaging a single-stranded DNA genome of approximately 5,100 nucleotides. There are two open reading frames (ORFs) encoding non-structural proteins (NS), and capsid proteins (VP) (Chen et al., 2015).

Recently, with advances in virological diagnositic techniques, a novel nucleic acid amplification method—loop-mediated isothermal amplification (LAMP) has attracted intense attention, which relies on auto-cycling strand displacement DNA synthesis by the Bst DNA polymerase large fragment with high strand displacement activity and a set of specific primers that recognizes six distinct sequences in the target DNA (Notomi et al., 2000). In addition, LAMP has been considered as a time-saving, low-cost, highly specific and sensitive method (Chotiwan et al., 2017), which can be completed within 60 min under condition of constant temperature, and it has been established to detect GPV, Muscovy duck parvovirus (MDPV), porcine parvovirus (PPV), canine parvovirus (CPV), and others targeting at VP gene (Cho et al., 2006; Chen et al., 2009; Ji et al., 2010; JinLong et al., 2010). Results of LAMP can be judged by either turbidity, or end-products that can be visible to naked eyes with fluorescent reagents such as SYBR Green I (Tomita et al., 2008).

In this study, a detection method quantitative loop-mediated isothermal amplification (qLAMP) for amplifying VP3 gene of N-GPV was established. Amplification curves and good linear relationship have been obtained. Specificity of this method was determined by GPV and other duck-origin viruses, such as duck plague virus, duck tembusu virus, duck hepatitis virus, duck reovirus, Muscovy duck parvovirus, and H9N2-AIV. In addition, sensitivity of qLAMP was carried out with plasmid substances after ten-fold series dilutions. These test results above demonstrated that this method has advantages with strong specificity, high sensitivity, easy operated, and low cost so that is valuable and suitable for clinical application in basic level production.

The liver samples were homogenized in dulbecco’s modified eagle medium (DMEM), frozen and thawed three times, then centrifuged at 5000 ×g for 15 min. The supernatant were filtered through a 0.22 μm filter, and the filtrate was inoculated into duck embryo fibroblasts (DEF) cells. The culture supernatant was harvested after 5 days post-inoculated for three passages, and detected by PCR.

Extraction of DNA and RNA

VP3 gene of N-GPV, GPV, and MDPV were aligned by the MegAlign software, and phylogenetic tree was constructed with MEGA version 7.0 using the neighbor-joining method (Figure 1). The reference waterfowl parvovirus isolates are listed in Table 1. 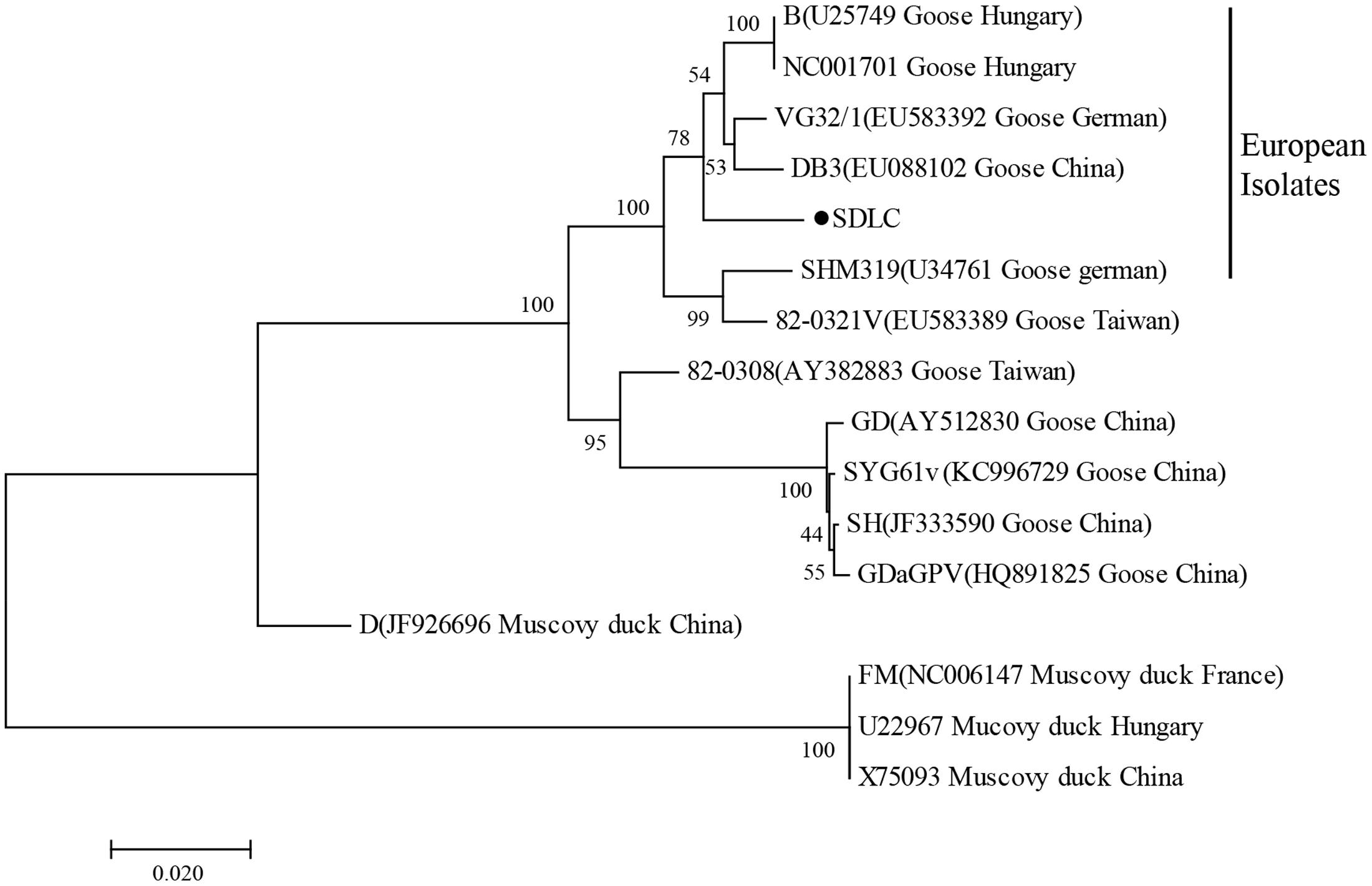 FIGURE 1. Phylogenetic relationship between SDLC (●) and other waterfowl parvovirus strains based on the VP3 gene in the phylogenetic tree built using the neighbor-joining method. 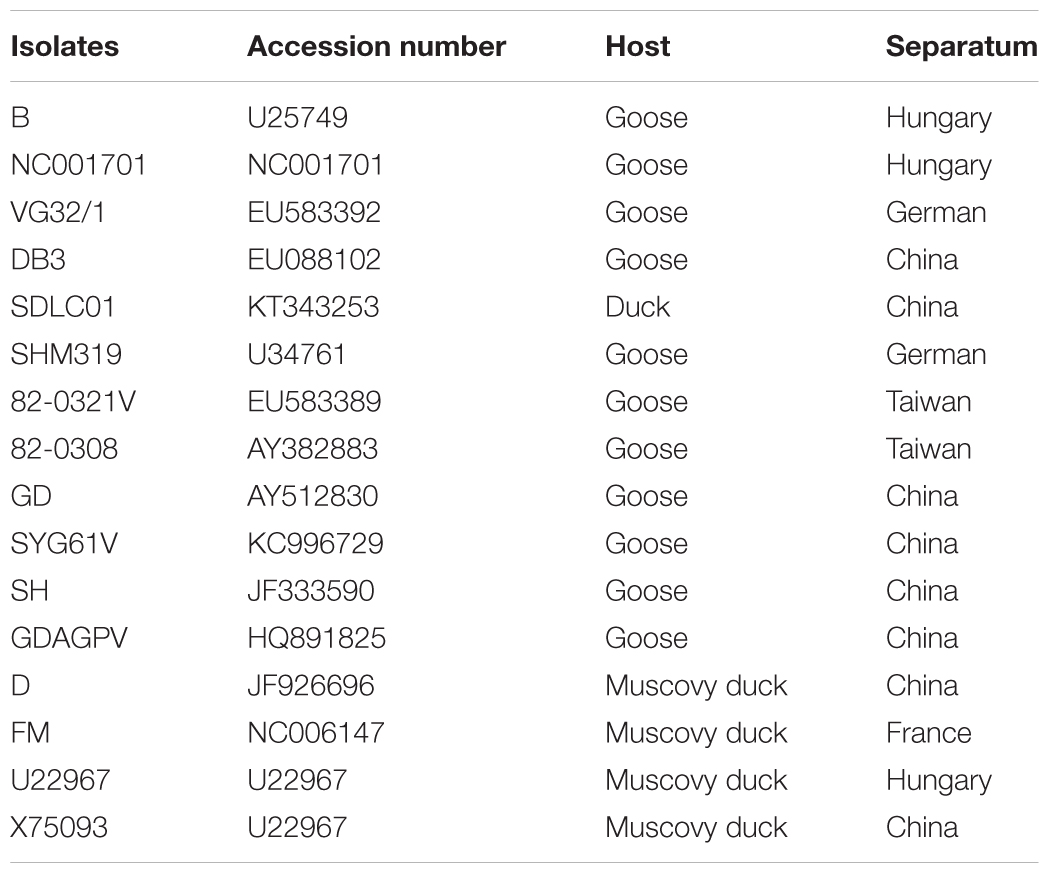 TABLE 1. Description of waterfowl parvovirus isolates involved in this study.

A set of four primers and PCR primers were designed based on the VP3 gene of N-GPV using an online program (PrimerExplorer V4, http://primerexplorer.jp/elamp4.0.0/index.html) and Primer 5.0 software respectively. Primers including two inner (FIP and BIP), two outer (F3 and B3), and PCR primers are shown in Table 2.

Ten-fold series dilutions (107–100 copies/μL) of standard substance were used as templates for qLAMP amplification to confirm its sensitivity.

Sensitivity test was performed to compare PCR and LAMP assay, and plasmid with different dilutions was used as templates for PCR detection. F3, B3 Primers for PCR amplification were shown in Table 2. PCR results were electrophoresed in 2% TAE agarose gel and observed in the UV transilluminator.

To confirm that the qLAMP detection method has good reproducibility to detect N-GPV, tenfold series dilutions of plasmid substances, from 1.0 × 107 copies/μL to 1.0 × 100 copies/μL were used. For the intra-assay test, triplicate from each dilution were tested in the same run. For the inter-assay test, samples from each dilution were tested in three independent runs. The results were evaluated by coefficient of variation.

To determine genetic relationship between SDLC and other GPV and MDPV strains, phylogenetic tree of VP3 genes was constructed. Phylogenetic trees based on VP3 genes showed that the SDLC strains were in the same branch with European GPV and vaccine isolates, and shared 93.4–98.9% identity with GPV isolates, while only shared 80.4–88.7% with MDPV, which indicated that evolutionary relationship of SDLC strain is closer to GPV stains, and N-GPV is a novel variant of GPV.

Concentration of positive plasmid was 253.50 ng/μL, determined by DS-11 Spectrophotometer (Denovix, America), and the copy number was 7.91 × 1010 copies/μL. The standard curve was generated by Tt values obtained from this study, and a good linear relationship was established between the log of the plasmid copy numbers (copies/μL) and the Tt values (R2= 0.997), with a regression line revealing an average intercept of 51.14 and an average slope of –5.2 (Figure 2). 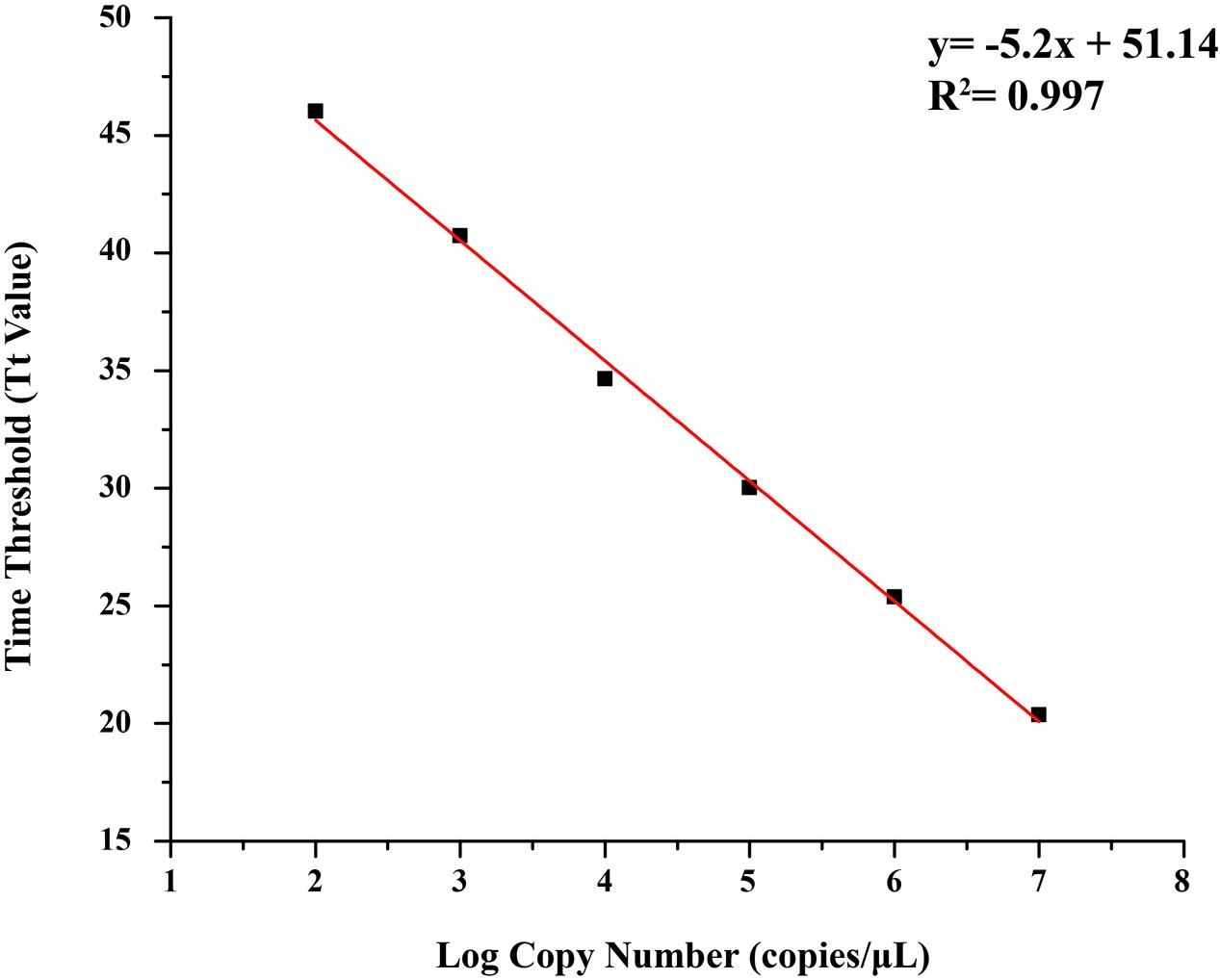 Performed by ten-fold series dilutions (1.0 × 107–1.0 × 100 copies/μL) of standard substance, the qLAMP method for N-GPV detection has the lowest limit of 102 copies, and no amplification signals were observed in negative control (NC) (Figure 3A). In our strategy, the results of qLAMP assay could not only be evaluated by naked eyes at the endpoint with EvaGreen® fluorescent dye in the UV light (Figure 3B) and agarose gel electrophoresis (Figure 3C), it could also be quantitatively monitored using the real-time PCR system during the reaction.

Specificity test of qLAMP method was carried out by seven duck-origin viruses and a goose-origin virus (mentioned in virus and samples). The results showed that our assay could only detect N-GPV and GPV, while no amplification signals were detected in other viruses (Figure 4A). The specificity of qLAMP assay could also be confirmed by green fluorescence in the UV light (Figure 4B), and typical ladder pattern seen in the agarose gel electrophoresis (Figure 4C). In addition, no positive results were obtained in negative control (NC), which indicates that this qLAMP assay has a good specificity for N-GPV detection. 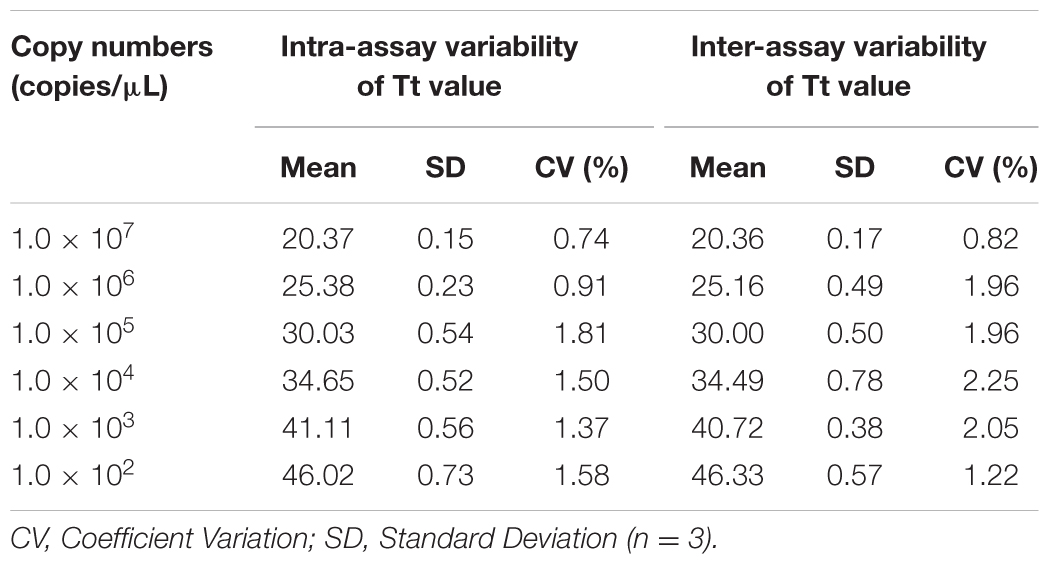 Different dilution plasmids (1.0 × 107–1.0 × 100 copies/μL) were used as templates for LAMP and PCR amplification. Results showed that the detection limit of qLAMP assay was 102 copies, while PCR assay was 104 copies, which indicated the sensitivity of LAMP method was 100 times higher than PCR method.

Loop-mediated isothermal amplification, PCR, and virus isolation assay were performed on clinical samples and cloacal swabs of ducks from different regions of China. The results were shown by statistical analysis in Table 4. The results showed that the consistency of these three methods in every sample. The sensitivity of qLAMP assay was the highest, and there was no positive amplification in negative control in qLAMP assay, PCR, and virus isolation assay. 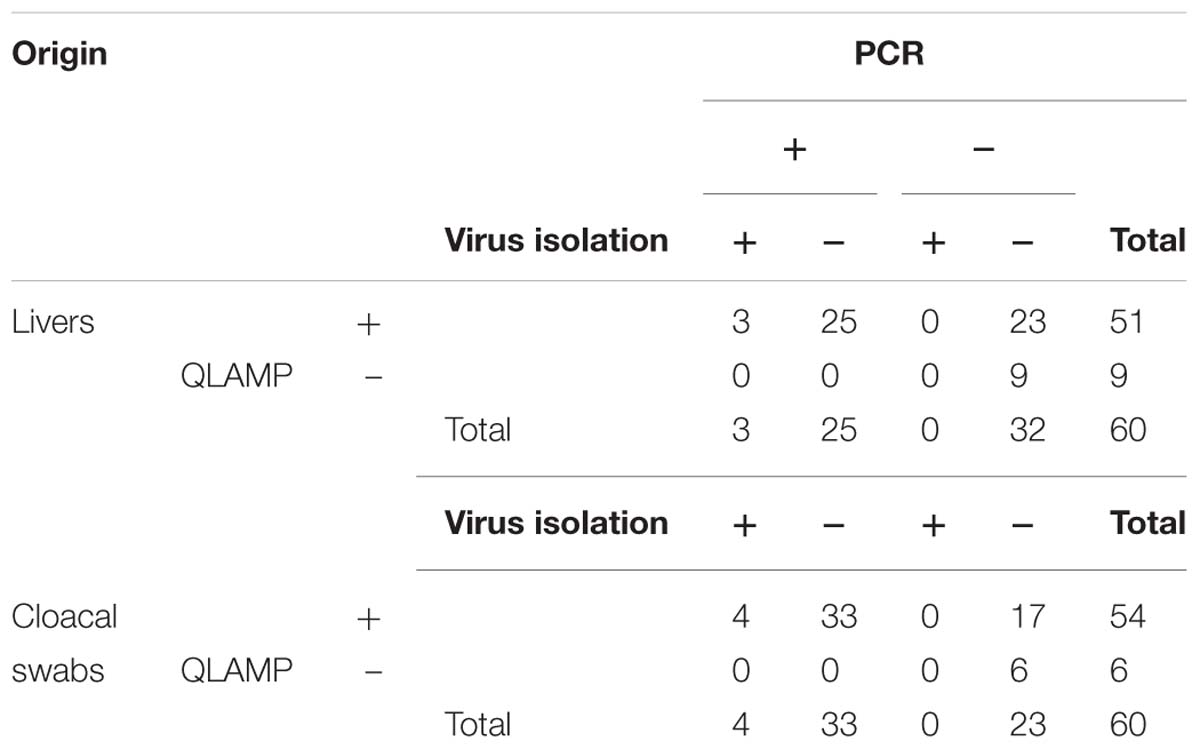 Currently, as a laboratory assay and conventional method, PCR is used most widely. However, not only does it require expensive equipments and much time, but also it has a high requirement for experiment conditions. Meanwhile, although the Taqman-based real-time PCR assay has been established for the detection of N-GPV, it is time-consuming and costly; In addition, the detection limit (8.8 × 101 copies/μL) is almost the same as qLAMP assay (1.0 × 102 copies/μL) (Niu et al., 2016), so the rapid, simple, reliable, and cost-efficient qLAMP assay is definitely a good choice in detecting N-GPV.

Although traditional SYBR Green I-based LAMP assay is a good method with high sensitivity and specificity, adding fluorescence dye after reaction would cause aerosol pollution, thus resulting in a false positive. However, SYBR Green I would inhibit PCR amplification if added before LAMP reaction (Eischeid, 2011). So, the novel EvaGreen-based quantitative LAMP assay has overcome these disadvantages and is more suitable for further application. This method could also be carried out in a water bath or on a real-time PCR instrument for quantitative analysis, and results can be easily observed by turbidity, fluorescence in the UV by naked eyes and agarose gel electrophoresis.

This study was the first to report the EvaGreen-based LAMP assay for detecting N-GPV. Based on the data above, the detection limit of this method was as low as 1.0 × 102 copies/μL, especially the intra and inter-assay variations, — just 0.74–2.25% only. In addition, the specificity of this method was 100 times higher than traditional PCR assay, and was almost the same as qPCR assay.

Novel goose parvovirus is newly discovered in recent years, which mainly causes ducks growth retardation and high infection rate to meat ducks, while GPV mainly causes serious death to goslings. According to the view of homology, the N-GPV strain is closer to European GPV and vaccine isolates, while separated from Asian isolates. Therefore, it is clear that N-GPV is a member of GPV-related parvovirus. N-GPV and GPV are almost indistinguishable using this method due to higher nucleotide homology, but it’s also a great method for the detection of N-GPV, because these two pathogens are from different poultry.

The qLAMP assay has proved to be a highly sensitive, specific, and reliable diagnostic method that can detect N-GPV in a simple, rapid, and cost-efficient way. It could be undoubtedly used as a point-of-care strategy for clinical laboratories to prevent diseases from breaking out (Notomi et al., 2015).

Copyright © 2017 Yang, Chen, Wang, Yu, Niu, Tang and Diao. This is an open-access article distributed under the terms of the Creative Commons Attribution License (CC BY). The use, distribution or reproduction in other forums is permitted, provided the original author(s) or licensor are credited and that the original publication in this journal is cited, in accordance with accepted academic practice. No use, distribution or reproduction is permitted which does not comply with these terms.