Helicobacter pylori Infection Is Not Associated with Non-alcoholic Fatty Liver Disease: A Cross-Sectional Study in China

Background and Aim: Helicobacter pylori infection has been reported to promote the development of a variety of extra-digestive manifestations, including type 2 diabetes, cardiovascular and liver diseases. Recently, the association between H. pylori infection and non-alcoholic fatty liver disease (NAFLD) was also proposed. However, evidence from different studies was controversial. We therefore performed this study to investigate the relationship between them in a large population of apparently healthy subjects in China.

Methods: A total of 21,456 subjects underwent a healthy checkup program were included. H. pylori infection was detected by 14C urea breath test (14C-UBT) and NAFLD was diagnosed by ultrasonography.

Results: Subjects infected with H. pylori had a more unfavorable metabolic profile, including higher levels of body mass index (BMI), blood pressure, triglycerides (TG) and lower levels of high-density lipoprotein cholesterol (HDL-C), as compared with those without H. pylori infection (all P < 0.05). Moreover, the prevalence rate of NAFLD was significantly increased in subjects with H. pylori infection when compared with those without H. pylori in women (23.6% vs. 21.5%, P < 0.05), but not in men (46.5% vs. 45.5%, P > 0.05). After adjusting for confounding factors including age, sex, BMI, blood pressure and lipid profiles, multivariate logistic analysis revealed that H. pylori infection was not independently associated with the risk of NAFLD in the total population (OR = 0.9, 95% CI = 0.9–1.0, P = 0.097). Also, subgroup analysis (stratified by age, sex, BMI, and diabetes status) showed no independent association between H. pylori infection and NAFLD.

Conclusion: Our data suggests that H. pylori infection is not independently associated with the risk of NAFLD in apparently healthy subjects.

Non-alcoholic fatty liver disease (NAFLD), defined as the presence of hepatic steatosis in the absence of alcohol use and other causes of liver disease, has become one of the most prevalent liver diseases worldwide (Hassan et al., 2014). It represents a spectrum of conditions from simple steatosis to non-alcoholic steatohepatitis (NASH) and cirrhosis. A growing body of evidence has linked NAFLD to obesity, dyslipidemia, diabetes and insulin resistance, and it has been considered to be a hepatic manifestation of metabolic syndrome (Fabbrini and Magkos, 2015).

Helicobacter pylori is a Gram-negative, spiral shaped pathogenic bacterium that colonizes the gastric epithelium in human population. The prevalence of H. pylori infection is about 30% in developed and up to 80% in developing countries. It has been demonstrated that H. pylori causes chronic gastritis, peptic ulcer disease, and gastric cancers (Wotherspoon et al., 1991; Wessler et al., 2017). Besides, persistent infection of H. pylori promotes immune cell infiltration and chronic inflammation, which induce the production and diffusion of pro-inflammatory cytokines and cause systemic effects. In recent years, H. pylori was reported to be associated with the development of a variety of extra-digestive manifestations, including type 2 diabetes, cardiovascular and liver diseases (Roubaud Baudron et al., 2013). Since H. pylori does not enter circulation, these extragastric manifestations are probably indirectly mediated by the inflammatory mediators produced by the infected gastric mucosa.

In the present study, we performed a cross-sectional investigation to determine whether H. pylori infection is associated with NAFLD in a large population of apparently healthy individuals in China. Moreover, the relationship between H. pylori and NAFLD was further investigated in subgroups stratified by age, sex, BMI, and diabetes status.

The study population was recruited from adults who underwent health checkups at Songjiang branch of the Shanghai First People’s Hospital between May 2013 and June 2014. Trained physicians collected detailed information of demography, medical history and drinking status by standard questionnaires. Subjects with an alcohol intake >140 g/week for men and 70 g/week for women, a history of viral hepatitis, auto-immune hepatitis or other forms of chronic liver disease, a history of respiratory, heart failure or renal diseases were excluded from the study. Finally, a total of 28,171 subjects were included in analysis. Characteristics of the study subjects were summarized in Table 1. This study was approved by the Institutional Review Board of Shanghai First People’s Hospital affiliated to Shanghai Jiao Tong University School of Medicine. All participants were verbally informed about the study. Written informed consent was not required for this study because of observational nature of the study. 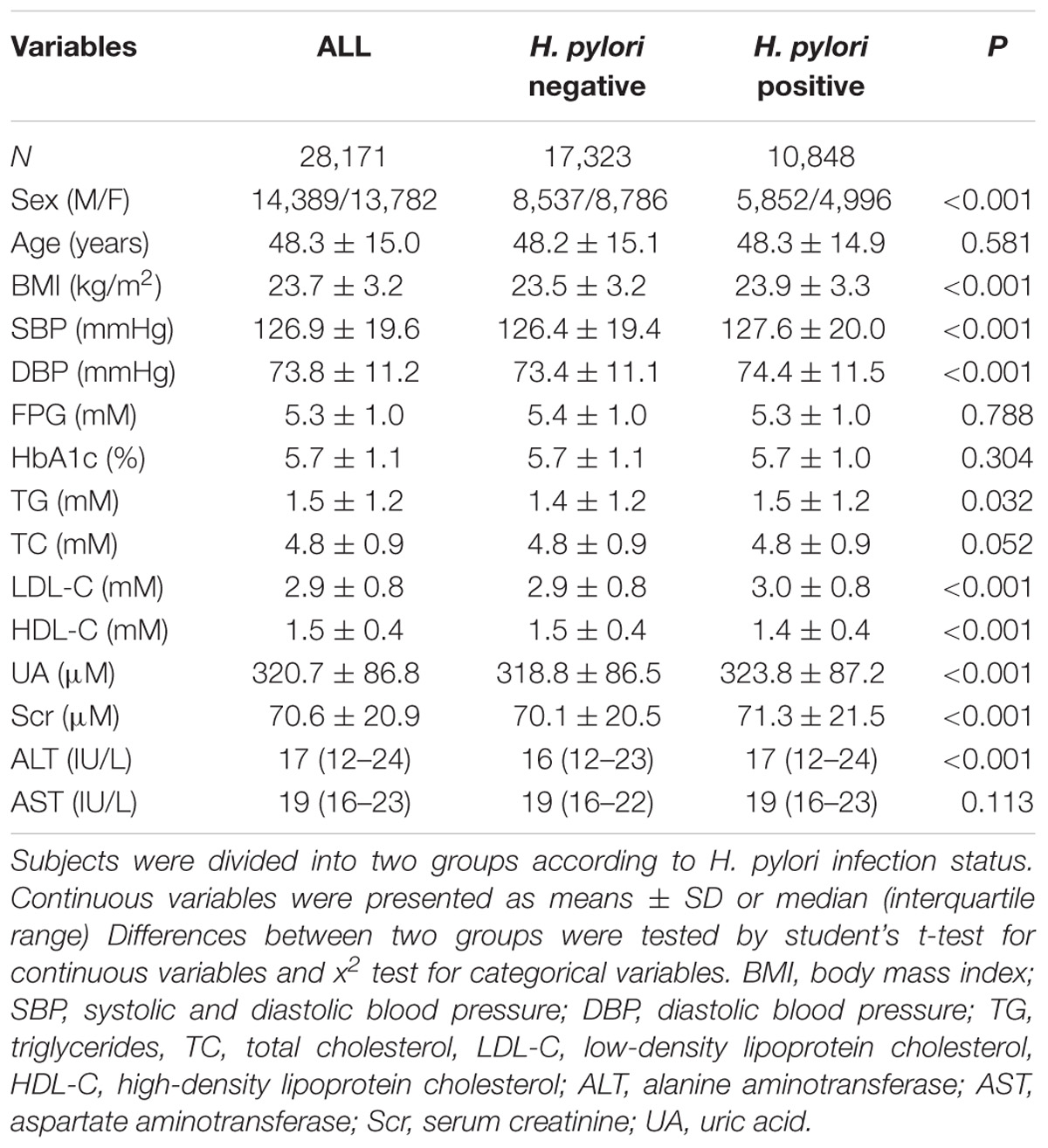 TABLE 1. Clinical and biochemical characteristics of the study subjects.

All subjects were assessed after overnight fasting for at least 10 h. Body weight, height, systolic and diastolic blood pressure (SBP, DBP) were measured by an experienced physician. BMI was calculated as body weight in kilograms divided by body height squared in meters.

The diagnosis of H. pylori infection was based on the results of fasting 14C urea breath test (14C-UBT), which is one of the most important and reliable non-invasive approaches for detection of H. pylori infection. Subjects fasted for overnight were first given a tablet of urea labeled with an uncommon isotope of radioactive carbon-14. After 30 min, breath samples were collected and the amount of isotope labeled carbon dioxide was measured in exhaled breath by scintillation. A positive result indicated the existence of H. pylori.

The diagnosis of NAFLD was based on the results of abdominal ultrasonography using a high-resolution B-mode tomographic ultrasound system with a 3.5-MHz probe (Toshiba, Tokyo, Japan). According to Diagnostic Criteria of Nonalcoholic Fatty Liver Disease by the Chinese Society of Hepatology in 2010, hepatic steatosis was defined by the presence of at least two of three of the following abnormal findings: diffuse hyperechogenicity of the liver relative to the kidneys; attenuation of the ultrasound beam; poor visualization of intrahepatic architectural details. Alcohol consumption, viral, or autoimmune liver disease were determined by questionnaire survey and was excluded before NAFLD diagnosis.

Clinical Characteristics of the Study Population

In all subjects, 10,848 were infected with H. pylori (38.5%). Clinical and biochemical characteristics of the participants stratified by H. pylori infection status were summarized in Table 1. Subjects infected with H. pylori were more likely to be male, and had higher levels of body mass index (BMI) and blood pressure. In addition, more unfavorable lipid profiles were observed in the H. pylori infected group, including higher triglycerides (TG) and low-density lipoprotein cholesterol (LDL-C) levels and lower high-density lipoprotein cholesterol (HDL-C) levels as compared with those without H. pylori infection., Moreover, serum uric acid (UA), serum creatinine (Scr) and alanine aminotransferase (ALT), which represent the impairment of kidney or liver, were all elevated. In contrast, no significant difference was found in age, fasting blood glucose (FBG) and HbA1c between the two groups (Table 1), which suggests no impact of H. pylori infection on blood glucose.

Prevalence of NAFLD According to the Infection of H. pylori

TABLE 2. The risk of NAFLD according to the infection of H. pylori.

Next, subgroup analyses were also performed. As shown in Figure 2, regardless of stratification by age, sex, BMI and diabetes status, no significant association between H. pylori and NAFLD was observed after adjusting for confounding factors. 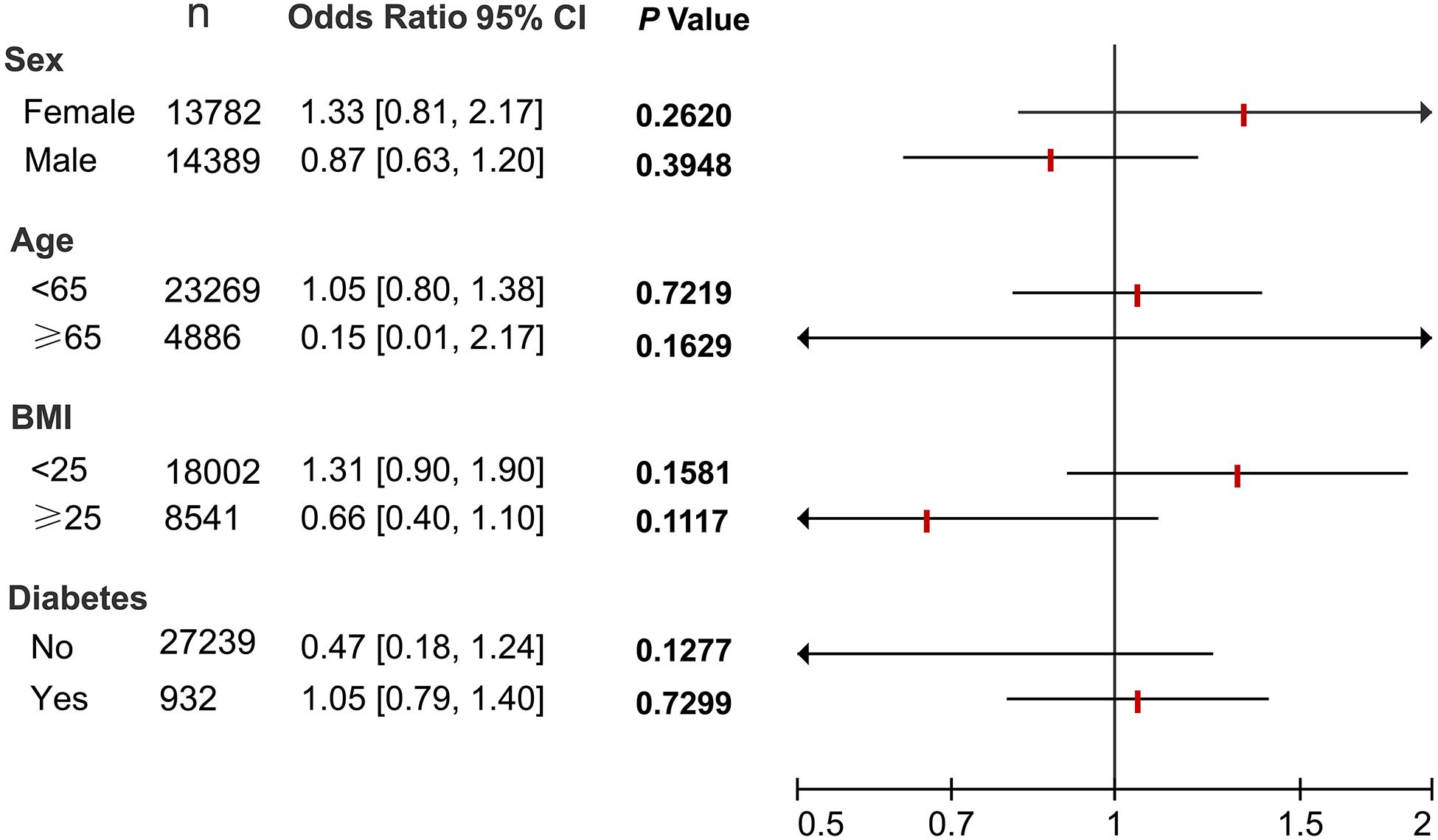 Helicobacter pylori infection has shown to be correlated with NAFLD, but the results from different studies were controversial. In the present study of apparently healthy population, we found that H. pylori infection was related to metabolic risk factors including BMI, blood pressure, TG and HDL. However, no independent association between H. pylori and NAFLD was observed.

In the past few years, a growing body of evidence has shown an association between H. pylori infection and obesity and a more unfavorable metabolic profile (Xu et al., 2014; Baeg et al., 2016). Recently, in a cohort study including 17,028 adults, participants with H. pylori infection were found to have higher blood pressure, BMI, total cholesterol, LDL-C, triglycerides and HOMA-IR, and lower levels of HDL-C than subjects without H. pylori infection (Kim et al., 2017). Consistent to these previous studies, our present study showed significantly higher BMI, blood pressure, TG, LDL-C and UA levels in H. pylori group than the control group. Though the reasons responsible for the association between H. pylori and metabolic abnormalities have yet not been clearly elucidated, inflammation and insulin resistance induced by H. pylori has proposed to be the underlying mechanisms (Li, 2013; Vafaeimanesh et al., 2014). With regard to inflammation, peptidyl prolyl cis, trans-isomerase secreted by H. pylori was found to drive Th17 inflammation in gastric adenocarcinoma (Amedei et al., 2014). Interestingly, Th17 inflammation were found to play a pathogenic role in obesity and related inflammatory diseases. (Chehimi et al., 2017). So, whether Th17 inflammation mediates the association between H. pylori and metabolic abnormalities merits further investigation.

Our study did not confirm the association between H. pylori and NAFLD. However, there are several limitations that require consideration. First, our study was cross-sectional, which did not allow to make a cause–effect inference. Second, the best method for an accurate diagnosis of NAFLD is liver biopsies. Ultrasonic examination, which was applied in the present study for diagnosis of NAFLD, is not sensitive enough to detect mild liver steatosis. Moreover, because hepatic ultrasound does not allow precise quantification of the severity of NAFLD, relationship between H. pylori infection and hepatic steatosis severity could not be evaluated. However, this non-invasive method is still widely used in clinical practice and epidemiological studies and is accepted for its sensitivity and specificity in detecting hepatic steatosis.

The present study showed no independent association between H. pylori infection and NAFLD. More clinical and basic studies are required to further determine the relationship between them.

NF and YP conceived and designed the study. LP, ZX, and LZ collected the data. NF and YW analyzed the data. NF wrote the paper. All authors read and approved the manuscript.

This work was supported by grant from the National Natural Science Foundation of China (81400785).

Copyright © 2018 Fan, Peng, Xia, Zhang, Wang and Peng. This is an open-access article distributed under the terms of the Creative Commons Attribution License (CC BY). The use, distribution or reproduction in other forums is permitted, provided the original author(s) and the copyright owner are credited and that the original publication in this journal is cited, in accordance with accepted academic practice. No use, distribution or reproduction is permitted which does not comply with these terms.