The Changing Pattern of Population Structure of Staphylococcus aureus from Bacteremia in China from 2013 to 2016: ST239-030-MRSA Replaced by ST59-t437

To investigate the epidemiology and genetic structure of Staphylococcus aureus bacteremia in China, a total of 416 isolates from 22 teaching hospitals in 12 cities from 2013 and 2016 were characterized by antibiogram analysis, multilocus sequence typing (MLST), spa typing and staphylococcal cassette chromosome mec (SCCmec) typing. The predominant meticillin-susceptible (MSSA) genotypes in 2013 were ST188 (19.1%), ST7 (8.7%), and ST398 (7.8%), respectively, and they continued to be the main genotypes in 2016. The prevalence of meticillin-resistant S. aureus (MRSA) were 36.5% (66/181) and 36.6% (86/235) in 2013 and 2016, respectively. Interestingly, the susceptibility rates of MRSA to rifampicin and fluoroquinolones increased significantly from 2013 to 2016 (P < 0.01), and this was associated with changes in genetic structure. ST239-t030-MRSA, the predominant genotype among all MRSAs in 2013 (34.8%), was replaced by ST59-t437-MRSA (15.1%) in 2016. Further analysis revealed that the ST239-t030-MRSA were more resistant to rifampicin, tetracycline and fluoroquinolones than ST59-t437-MRSA (P < 0.01). To further gain insight into the mechanisms underlying the changes of genetic structure, in vitro competition and fitness measurements were performed. Importantly, ST239-t030-MRSA displayed lower growth rate and lower competitive advantage compared to ST59-t437-MRSA. Together, our findings reveal that fitness advantage of ST59-t437-MRSA over ST239-t030-MRSA may lead to changes in genetic structure and increased susceptibility of MRSA to rifampicin and fluoroquinolones in Chinese patients with S. aureus bacteremia. Our study supports temporal dynamics in MRSA clone diversities, further providing critical insights into the importance of continued monitoring of MRSA.

The multicenter surveillance network is important in monitoring bacterial resistance in different regions and providing crucial insight into clinical infection control and rational use of antibiotics. One of the important tools in bacterial resistance surveillance is to track population structure changes for a given pathogen. In S. aureus, staphylococcal cassette chromosome mec (SCCmec) element, multilocus sequence typing (MLST), and spa typing have been widely used (Ito et al., 1999; Enright et al., 2000; Harmsen et al., 2003). Utilizing those methods, we have previously shown that ST239-MRSA-SCCmecIII and ST5-MRSA-SCCmecII were the predominant clones in Chinese hospitals in 2005–2006 and 2010–2011, respectively, while ST7-t091/t796, ST188-t189, and ST398-t571/t034 were the most prevalent methicillin-sensitive S. aureus (MSSA) bacteremia clones (Liu et al., 2009; He et al., 2013). This study aimed at investigating whether the population structure of S. aureus causing bacteremia has changed over the past several years and determine the underlying mechanism leading to the temporal dynamics in MRSA clone diversities.

A total of 416 consecutive, non-duplicate S. aureus bacteremia isolates were collected from 22 teaching hospitals in 12 cities from January–December in 2013 (181 isolates) and 2016 (235 isolates); the cities including Beijing, Changsha, Chongqing, Guangzhou, Hangzhou, Jinan, Nanjing, Shanghai, Shenyang, Tianjin, Wuhan and Xi'an, representing the capitals of 12 different provinces, and were distributed in distant geographic areas in China (the surveyed cities were same as that referred in He et al., 2013). These isolates were provided by the Gram Positive Cocci Resistance Surveillance (GPRS) networks and Chinese Antimicrobial Resistance Surveillance of Nosocomial Infections (CARES) networks (detail information of these two networks was shown in Acknowledgments). For GPRS networks, each center was required to send 50 non-repetitive consecutive Gram-positive cocci isolates in 2013, and 20 non-repetitive consecutive bacteremia S. aureus isolates in 2016; for CARES networks, 180 non-repetitive consecutive isolates from bloodstream infection, hospital-acquired pneumonia and intra-abdominal infection were sent from each center in 2013 and 2016. S. aureus isolates were re-identified by routine microbiology/biochemical methods, and/or the Vitek® 2 system (bioMérieux, Hazelwood, MO, US) in Peking University People's Hospital (the Central Laboratory). All isolates were stored at −80°C. The study was approved by the research ethics board at Peking University People's Hospital. Informed consent was not needed as this was a retrospective study and patients were anonymized.

The minimum inhibitory concentrations (MICs) of routine clinical antibiotics were determined using broth microdilution method (tedizolid and daptomycin) or agar dilution method (agents other than tedizolid and daptomycin) according to the CLSI guidelines (M7-A9) (CLSI, 2012). Isolates were categorized into resistant (R), intermediate (I), or susceptible (S) according to CLSI M100-S27 (CLSI, 2017). The MIC interpretive criteria for tigecycline were as recommended by the US Food and Drug Administration (FDA). S. aureus ATCC 29213 was used as quality control.

All S. aureus isolates were investigated by MLST and spa typing. Genomic DNA was prepared using DNA Extraction Kit (TIANGEN Biotech, China). MLST was performed as described previously and the sequences of the PCR products were compared with an MLST database (http://saureus.mlst.net) (Enright et al., 2000); a neighbor-joining tree was constructed with the concatenated sequences of the seven MLST genes (arcc, aroe, glpf, gmk, pta, tpi, and yqil) using MEGA5 (Tamura et al., 2011), and only one sequence from the same sequence types (STs) was used to avoid duplication. The clustering of STs was performed using eBURST V3 algorithm (http://eburst.mlst.net/) by comparing the present dataset to that of the S. aureus MLST database of 4408 STs by the end of November 2017 (https://pubmlst.org/saureus/), and ran with the default settings. STs that showed at least six of seven identical alleles were grouped into clonal complexes (CC). The spa genes were sequenced and spa types were assigned based on comparisons with the spa database (http://spa.ridom.de/spatypes.shtml) (Harmsen et al., 2003). Genes encoding the cassette chromosome recombinase (ccr) complex and mec complex were typed by multiplex PCR as previously described (Zhang et al., 2009, 2012).

In vitro Competition and Fitness Measurements

The randomly selected eight isolates were diluted to 0.5 × 107 colony-forming units (CFU)/ml, equal volumes were combined, thus the initial ratio of the isolate pairs was close to 1:1, then 10 μl of the mixture was added to 20 ml LB broth and cultured at 37°C with agitation at 200 rpm. At 24-h intervals, 10 μl bacterial subcultures were transferred to fresh LB broth; meanwhile, 10 μl was inoculated on drug-free MH agar, and 10 μl on MH agar containing 1 μg/ml rifampicin. The numbers of ST59-t437 (susceptible to rifampicin, MIC ≤ 0.016 μg/ml) and ST239-t030 (resistant to rifampicin, MIC ≥ 128 μg/ml) colonies were counted, and after 96 h, adaptive difference was calculated as

and the fitness cost as

The Prevalence of MRSA 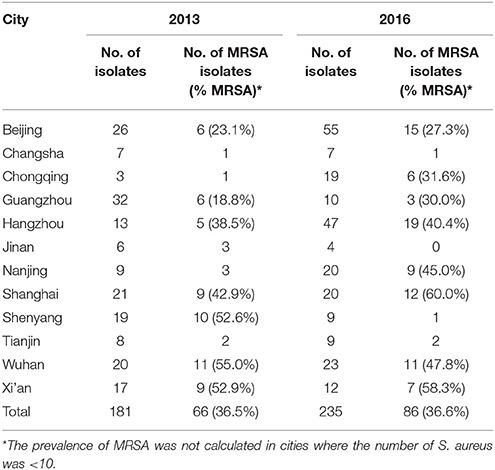 Table 1. Distribution of meticillin-resistant Staphylococcus aureus (MRSA) from bacteremia in 12 cities throughout China in 2013 and 2016.

Table 2. Activity profile of antibiotics against all meticillin-resistant Staphylococcus aureus (MRSA) isolates collected in China in 2013 and 2016 (MIC, μg/ml).

Molecular Typing and Prevalence of Genotypes 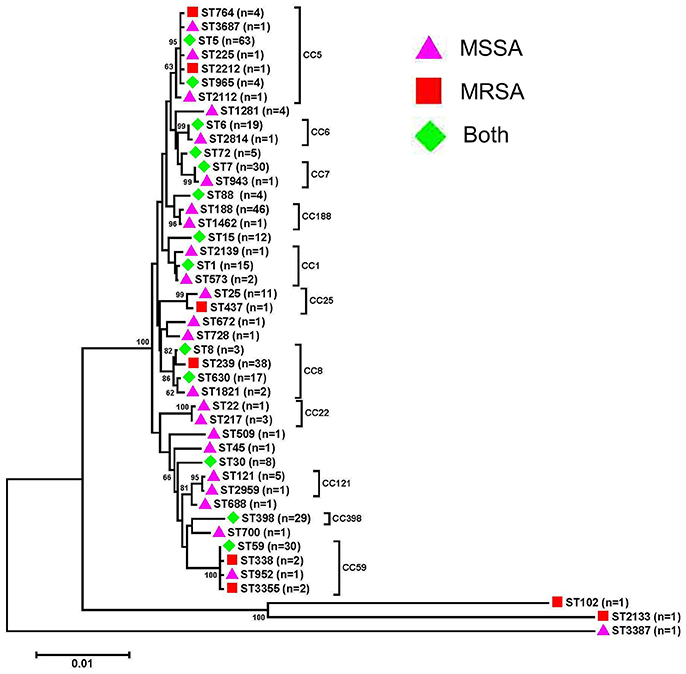 Figure 1. Phylogenetic analysis of multilocus sequence types (STs) of bacteremia Staphylococcus aureus isolates. The neighbor-joining tree was constructed with the concatenated sequences of the seven MLST genes (arcc, aroe, glpf, gmk, pta, tpi, and yqil) based on the distance matrix of pair-wise differences between STs. Bootstrap support was based on 1,000 replicates, and only branch nodes higher than 60 were shown. The bar is equivalent to one nucleotide change per 100 bp. MSSA, meticillin-susceptible S. aureus; MRSA, meticillin-resistant S. aureus. 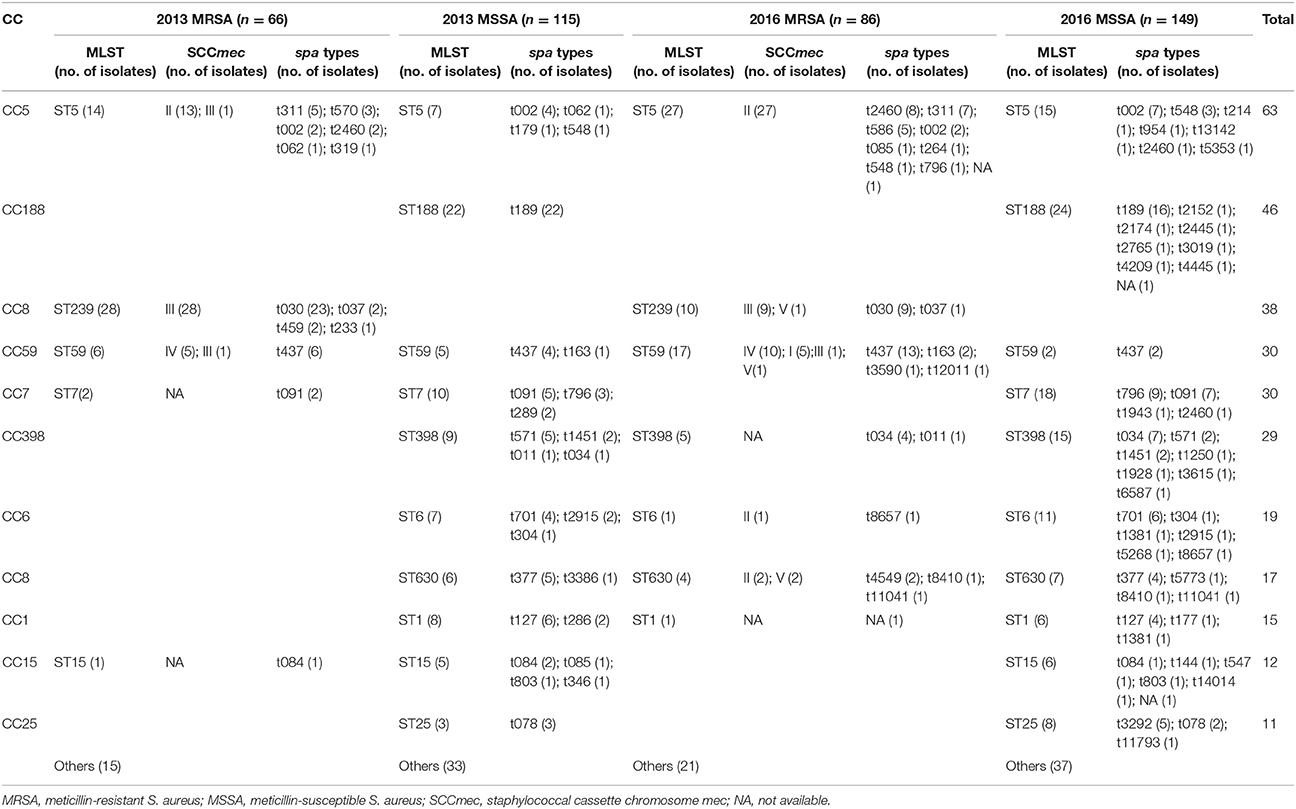 Table 3. The 11 predominant multilocus sequence types (MLSTs) and relationship between various molecular types of 416 Staphylococcus aureus bacteremia isolates in 2013 and 2016. 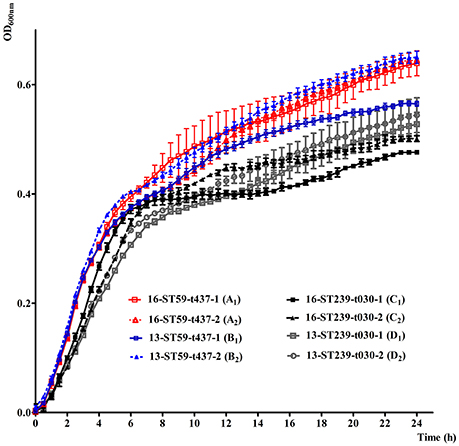 Figure 2. In vitro growth characteristics of random selected ST59-t437 and ST239-t030 meticillin-resistant Staphylococcus aureus (MRSA) isolates cultured at 37°C in LB broth. The means and standard deviation of three independent experiments are shown. The abbreviated codes (A1, A2, B1, B2, C1, C2, D1 and D2) for the isolates are listed in the brackets. Among the pairwise comparison of growth curves, A1C1, B2C1, and B2D1 showed significant statistical differences (P < 0.05), when using one-way analysis of variance (ANOVA) followed by Tukey–Kramer tests. 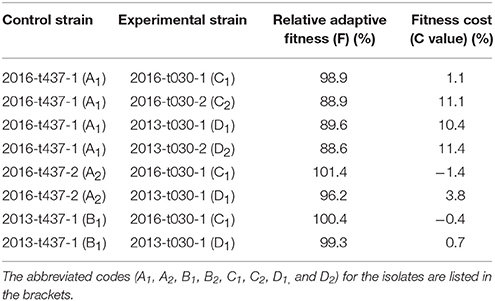 The predominant MSSA genotypes have remained basically unchanged: ST188-MSSA (13.7–19.1%), ST7-MSSA (8.7–18.5%), and ST398-MSSA (7.3–10.1%) were the three predominant MSSA genotypes from 2010–2011 to 2016. Interestingly, ST398 contained only MSSA in 2010–2011 and 2013, but MRSA strains occurred in Beijing (n = 2), Nanjing (n = 2) and Shanghai (n = 1) in 2016, which correlated with patients with infective endocarditis, nephropathy or hepatic encephalopathy. The emergence of ST398-t034/t011-MRSA might be due to an import of this clone from Europe, where livestock-associated MRSA (LA-MRSA) is widespread, and an increase of LA-MRSA has been reported for some regions in Europe (Schaumburg et al., 2012). However, these five ST398-MRSA isolates were susceptible to all surveyed drugs except erythromycin (two isolates were resistant to erythromycin). The occurrence of ST398-MRSA in China is important, which should be taken seriously and further studied with whole genome sequencing.

The limitations of present study were that the number of selected isolates for competition experiments was small, may not reflect the whole genotype population, and no genomic information supported for the growth advantage of ST59-t437-MRSA isolates. Further research would increase the sample size and do complete genomic comparison.

In conclusion, our findings reveal that fitness advantage of ST59-t437-MRSA over ST239-t030-MRSA may lead to changes in genetic structure and increased susceptibility of MRSA to rifampicin and fluoroquinolones in Chinese patients with S. aureus bacteremia. Our study supports temporal dynamics in MRSA clone diversities, further providing critical insights into the importance of continued monitoring of MRSA.

Copyright © 2018 Li, Sun, Yang, Chen, Yin, Li, Zhao and Wang. This is an open-access article distributed under the terms of the Creative Commons Attribution License (CC BY). The use, distribution or reproduction in other forums is permitted, provided the original author(s) and the copyright owner are credited and that the original publication in this journal is cited, in accordance with accepted academic practice. No use, distribution or reproduction is permitted which does not comply with these terms.