A commentary on
Health-Associated Niche Inhabitants as Oral Probiotics: The Case of Streptococcus dentisani

With the intention of screening our own strain collection for the presence of S. oralis ssp. dentisani, we tested these PCR primers with the type strains of S. oralis ssp. dentisani 7747T, ssp. oralis ATCC 35037T, ssp. tigurinus Az3aT, six S. mitis strains (OMI 181-184, 187-188) and four S. pneumoniae strains (OMI 157-159, 186). The arcC-directed PCR (Figure 1A, CkSd-F/R) was indeed very specific but the product was very short (76 bp) and we designed the alternative CkSdAlt-F/R primer pair amplifying a longer fragment of 175 bp (Figure 1A). The ORF540-directed PCR was found to be more bacteriocin-type than species-directed. Furthermore, we designed a 16S rRNA-gene-directed PCR expanding the options for application (Figure 1A, SDent-16S-F/R). Applying the two Ck- and the 16S-directed PCR, we screened our strain collection of clade S. oralis strains. We found four S. oralis ssp. dentisani strains (SN39325, SN54787, SN54788, SN58364) among isolates of proven and epidemiologically unrelated cases of infective endocarditis (National Reference Center for Streptococci, RWTH Aachen University Hospital, Germany; described in Conrads et al., 2017), and two strains (OMI 214 and OMI 215) isolated from the tooth surface of healthy caries-free probands. Next, we characterized these strains genetically by sequencing the 16S-rRNA gene (Figure 1B) and phenotypically in-vitro for their buffering capacity (Figure 1C). The buffering phenotype is dependent on the arginine deiminase system, which is determined by arcA (arginine deiminase), arcB (ornithine carbamoyltransferase), and arcC (carbamate kinase). The system is activated by a pH drop and leads to ammonia formation and neutralization of the environment and is—besides bacteriocin production—the reason for the probiotic and anti-cariogenic nature. López-López et al. tested the buffer capacity of strain 7746 only under aerobic conditions (A. Mira, personal communication). However, the atmospheric conditions in the oral cavity and especially on tooth surfaces are rarely truly aerobic, but instead something between micro-aerobic, CO2-rich, and anaerobic. Thus, we reproduced the growth-experiments in the same arginine-enriched BHI-medium and applying the same protocol but this time under aerobic, CO2-rich (7%), and anaerobic conditions. Together with our six S. oralis ssp. dentisani strains, we used S. oralis ssp. dentisani (7746, 7747T) and S. gordonii strains (OMI 231, GH 355) as positive controls of a functional arginine deiminase system. S. oralis ssp. oralis and ssp. tigurinus, as well as un-inoculated BHI (plus/minus arginine), served as negative controls. Clearly, all our six isolates demonstrated buffering activity, even more strongly pronounced than with the strains 7746 and 7747T (Figure 1C). An increase of buffering activity was detected for S. oralis ssp. dentisani strains from CO2 (Δ pH 0.59–1.65, mean 1.36, median 1.43) to aerobic (Δ pH 0.56–2.22, mean 1.64, median 1.73) to anaerobic (Δ pH 1.41–1.85, mean 1.74, median 1.79) conditions. This increased activity under anaerobic conditions was significant for 5 of the 8 S. oralis ssp. dentisani strains tested. In time-curve experiments we confirmed that the alkalization process in arginine-supplemented BHI medium started between 6 and 8 h after inoculation but in the atmosphere of 7% CO2 it needed a pH as low as ≤ 5.5 to be induced. This finding has clinical impact since under microaerophilic, CO2-rich conditions, re-alkalization might start later than de-mineralization. 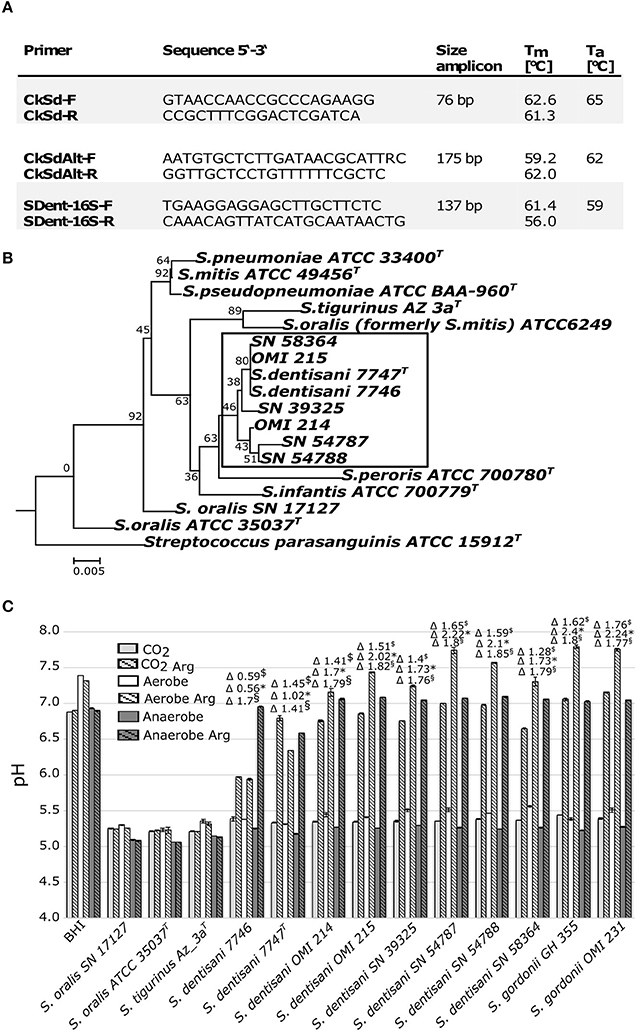 In conclusion, we support the findings of López-López et al. but with the following limitations: (i) the ORF450-directed primer showed low accuracy. We have designed alternative primers amplifying a longer arcC-fragment and a V1-V2-fragment of the 16S, expanding the applications; (ii) the induction and potential of alkalization of S. oralis ssp. dentisani is dependent on the atmosphere, with best results obtained under anaerobic conditions; (iii) as we found four endocarditis-associated strains in our collection and a Danish group recently even found six (Rasmussen et al., 2017), it must be indicated that some strains of S. oralis ssp. dentisani might bear the potential for causing infective endocarditis in immunocompromised patients. The challenge thus is to find—or produce—a strain with the most probiotic and the least infective potential.

GC supervised the study, wrote the commentary, and is the corresponding author. JB performed experiments on the phenotypic characterization of S. dentisani isolates. CK performed experiments on the genotypic characterization of S. dentisani isolates and designed the PCR primers. MA checked genomic data and all results for plausibility and commented on and corrected the manuscript.

Copyright © 2018 Conrads, Bockwoldt, Kniebs and Abdelbary. This is an open-access article distributed under the terms of the Creative Commons Attribution License (CC BY). The use, distribution or reproduction in other forums is permitted, provided the original author(s) and the copyright owner are credited and that the original publication in this journal is cited, in accordance with accepted academic practice. No use, distribution or reproduction is permitted which does not comply with these terms.