Lynne A. Goodwin5 and

In the original article, there was a mistake in Figure 2 as published. Specifically, panel 2D was included in error thus, the authors wish to remove it. Consequently, the caption for Figure 2 has been updated due to the removal of 2D, and the in-text citation has been removed from the following sentence: “E. coli overexpressing wild type CooA-2 acquired a red color similar to the color of CooA-1 expressing E. coli as described in Youn et al. (2004) due to the accumulation of the heme containing protein (Figure 2D)” in Results section, subsection “Expression and Characterization of CooA-2”. The corrected Figure 2 appears below. 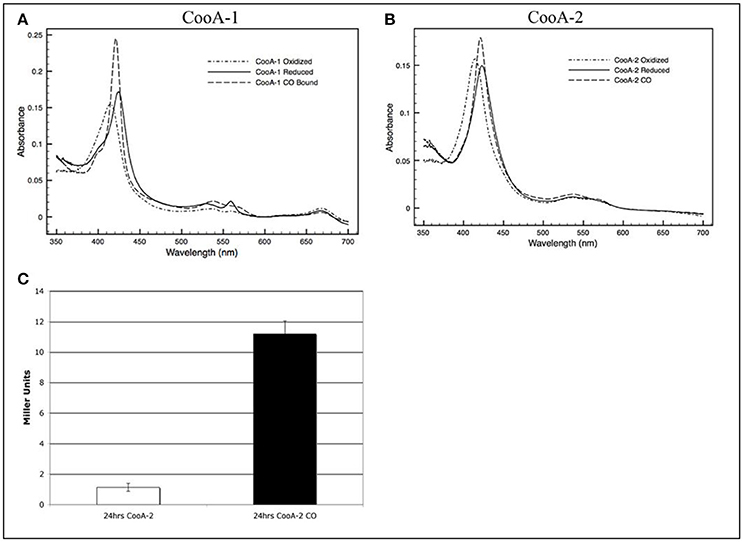 Figure 2. Visible spectra of a 2.2 μM (A) CooA-1 and (B) CooA-2. Dotted lines indicate the spectrum of oxidized CooA. Solid line indicates reduced CooA. Dashed line indicates reduced CooA under 1 atm of CO. (C) β-galactosidase activity of CooA-2 expressing E. coli DH5α with a lacZ under the control of the R. rubrum cooF promoter. Experiments with CO were grown with 2% CO in the headspace of the culture.

Additionally, there was a mistake in Figure 4. In the figure, the gel images had been edited. The no-protein control lane was moved to be adjacent to the relevant experimental lanes by removing empty lanes or ones with other controls. The authors neglected to mention this adjustment in the submission of the paper and wish to replace Figure 4 with an updated version where the spliced lanes have been clearly separated from the contiguous gel regions with black lines and white space to indicate where the control lanes are. The corrected Figure 4, as well as the original gel image used to prepare Figure 4, appear below. 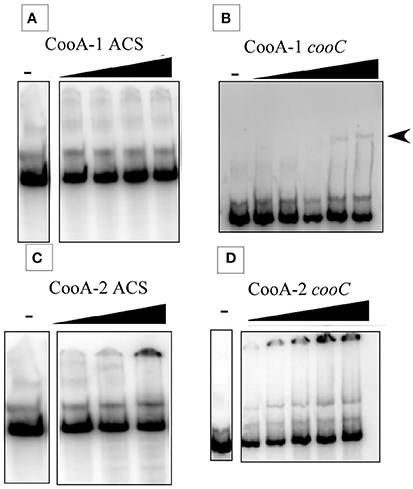 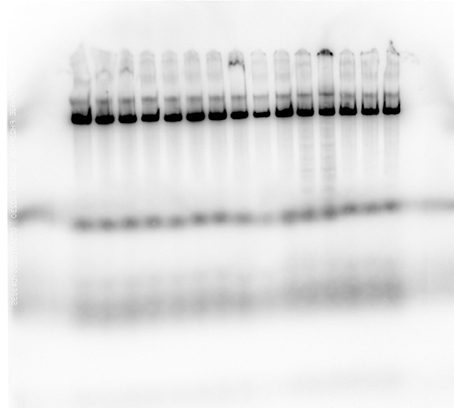 The authors apologize for these oversights and state that these errors do not change the scientific conclusions of the article in any way.

The original article has been updated.

Copyright © 2018 Techtmann, Colman, Murphy, Schackwitz, Goodwin and Robb. This is an open-access article distributed under the terms of the Creative Commons Attribution License (CC BY). The use, distribution or reproduction in other forums is permitted, provided the original author(s) and the copyright owner(s) are credited and that the original publication in this journal is cited, in accordance with accepted academic practice. No use, distribution or reproduction is permitted which does not comply with these terms.