Plant virus spread and transmission is, at least partially, dependent on the virus–vector interaction, which can be modified by the virus to obtain an adaptive advantage (Blua and Perring, 1992). A better understanding of the mechanisms mediating such relationship is important to reveal the interaction ecology and vector–virus co-evolution, and may serve as a basis for manipulating vectors to limit virus spread in plants.

Within plant-virus-insect tritrophic interactions, both insects and plants emit and receive chemical cues that modulate their interactions (Howe and Jander, 2008). Feeding behavior of whiteflies is affected by plant odors, and to exploit natural volatile signaling processes is a new strategy to manipulate whitefly behavior (Schlaeger et al., 2018). Besides, odorant binding proteins (OBPs) and CSPs of whiteflies can be effective targets for pest control as they may be involved in mating choice and host location of B. tabaci (Wang et al., 2017). However, there are still many gaps in whiteflies and odors research.

Infection by persistently transmitted virus can change plant volatile profile and the subsequent responses of its vector (Eigenbrode et al., 2002; Alvarez et al., 2007). Similarly, feeding can also affect the subsequent herbivore behavior and performance because of the defensive signaling and responses from plants (Sauge et al., 2006; Poelman et al., 2008; Sarmento et al., 2011a,b). Given the fact that MED/Q replaced MEAM1/B in China and the outbreak of virus is associated with the invasion of MED/Q, we hypothesize that B. tabaci will respond differently toward plants previously infested with viruliferous MEAM1/B and viruliferous MED/Q, respectively.

To test this hypothesis, we (1) conducted bioassays to compare the host preference of B. tabaci MEAM1/B and MED/Q on plants previously infested with viruliferous and non-viruliferous MEAM1/B and MED/Q, respectively; (2) profiled plant volatiles using GC-MS; and (3) functionally characterized ρ-cymene, thujene and neophytadiene, chemical cues that potentially modulate B. tabaci-TYLCV-tomato interactions using a Y-tube olfactometer.

Preference of B. tabaci on Plants Previously Infested With Non-viruliferous or Viruliferous MEAM1/B and MED/Q 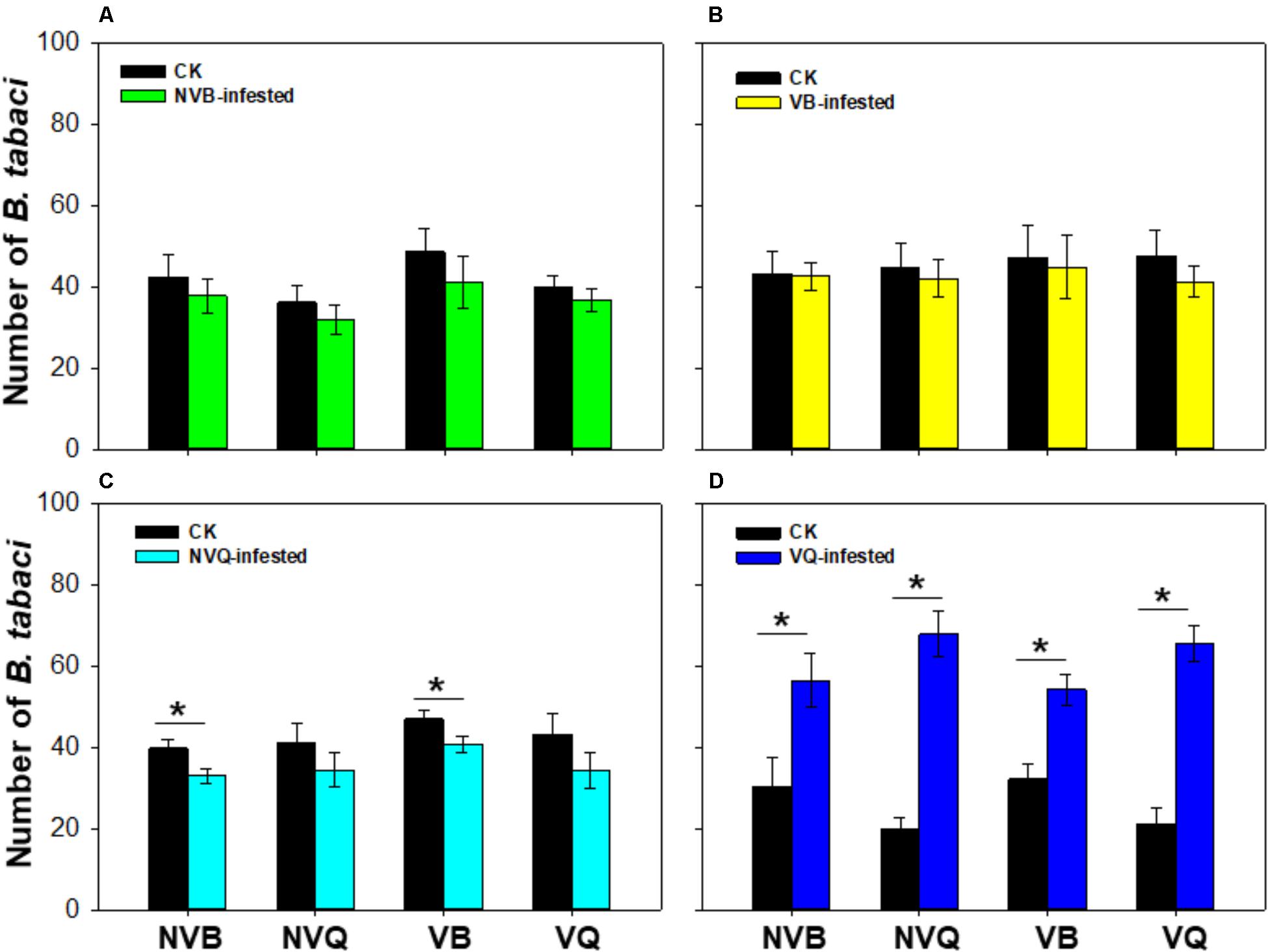 Extraction and Analysis of Plant Volatiles 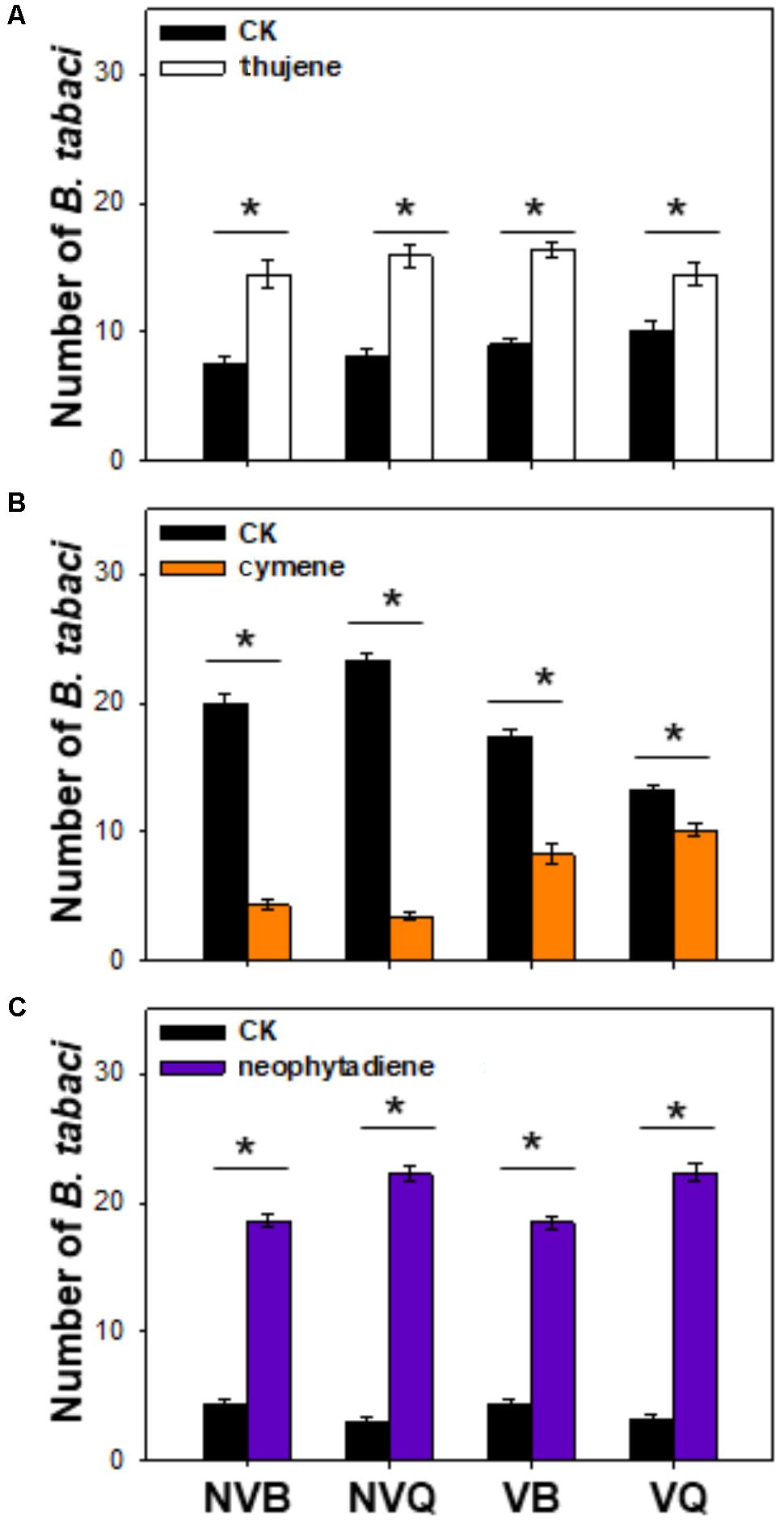 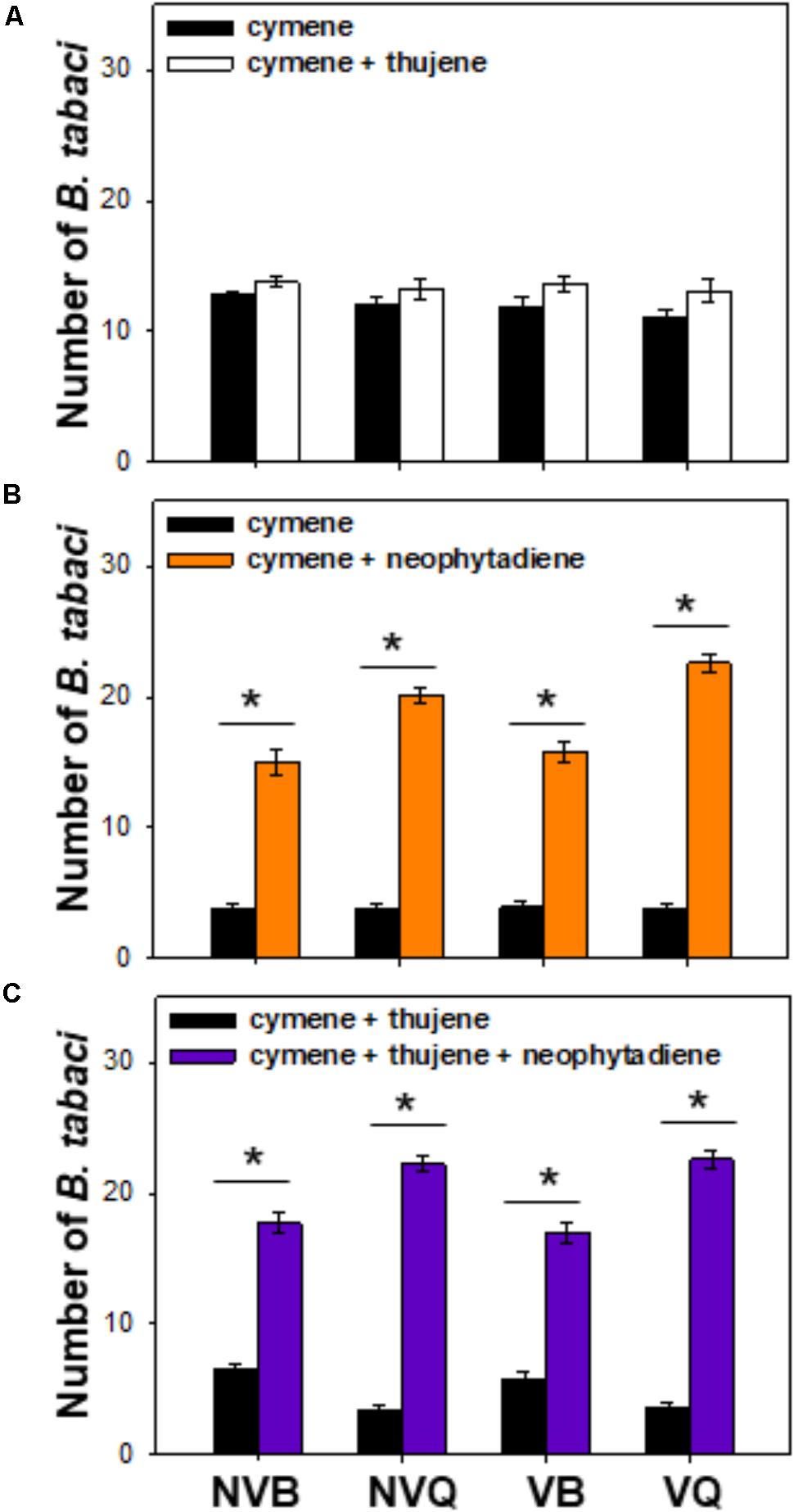 Plant volatiles play important roles in push-pull technology which combines repellents and attractants in the same cropping system (Schlaeger et al., 2018). According to our results, whiteflies were deterred from non-viruliferous MED/Q-infested plants and lured to plants infested with viruliferous MED/Q at the same time. The volatiles ρ-cymene and neophytadiene may play important roles in this process. OBPs can be involved in chemical recognition which regulates host choice of whiteflies (Wang et al., 2017), and more information about the olfactory system of whiteflies is needed. Besides, field studies are also needed to confirm the push and pull role of the volatiles ρ-cymene and neophytadiene.

Such tritrophic interaction between plant, insect vectors and virus eventually facilitates virus transmission. For example, cucumber mosaic virus (CMV) employs a 2b protein to target host’s JA pathway to manipulate host’s attractiveness to insect vectors (Ziebell et al., 2011; Wu et al., 2017). The viral satellite-coded βC1 protein of tomato yellow leaf curl China virus (TYLCCNV) interacts with the host protein AS1 to suppress JA-related responses to enhance the fitness of whiteflies (Zhang et al., 2012). Besides, βC1 protein also interacts with MYC2, a key component within the JA pathway, to activate terpene synthase and to establish a mutualistic relationship with B. tabaci (Li et al., 2014). The NIa-Pro protein of turnip mosaic virus (TuMV) manipulates the physiology of host plants to attract aphids to promote their reproduction (Casteel et al., 2014). In addition, the ethylene signaling is modified in the NIa-Pro-associated interference in plant defense; as a result, it facilitates the virus transmission by aphids (Casteel et al., 2015). TYLCV is a true monopartite begomovirus that lacks a beta-satellite (Zhou, 2013), and the protein of TYLCV interacting with the JA pathway may be different from TYLCCNV. Therefore, for the whitefly management purposes, further research focusing on the key protein(s) within the JA synthesis pathway, which can reduce neophytadiene production, is warranted.

Herbivores and pathogens have evolved counter-adaptations to manipulate direct and indirect plant defenses (Alba et al., 2011). In China, MED/Q not MEAM1/B is associated with the transmission of TYLCV. Previous research shows that insecticide resistance is one of the driving forces in the replacement of MEAM1/B by MED/Q (Pan et al., 2015). Some CSPs of MEAM1/B and MED/Q of whiteflies are crucial to facilitate the transport of fatty acids thus develop different resistance to insecticides (Liu et al., 2016). Based on our results, post-infection volatile changes is likely the other key factor contributing to the endemic feature of TYLCV in China.

Within plant-virus-insect tritrophic interactions, both insects and plants emit and receive chemical cues that modulate their interactions (Howe and Jander, 2008). Feeding behavior of whiteflies is affected by plant odors, and to exploit natural volatile signaling processes is a new strategy to manipulate whitefly behavior (Schlaeger et al., 2018). Besides, however, there are still many gaps in whiteflies and odors research.

Tomato plants (Solanum lycopersicum Mill. cv. Zhongza 9) were grown in a glasshouse for this experiment. TYLCV-infected tomato plants were produced at the 3-4 true leaf stage by Agrobacterium tumefaciens-mediated inoculation with a cloned TYLCV genome (GenBank accession ID: AM282874), which was originally isolated from Shanghai, China (Wu et al., 2006). Infection was carried out when the optical density (OD 600) of A. tumefaciens solution reached between 0.6 and 0.8. Viral infection of test plants was confirmed by the development of characteristic leaf curl symptoms and by molecular analysis with the TYLCV primer set TYLCV-61 and TYLCV-473 (Pan et al., 2012).

Establishment of Non-viruliferous and Viruliferous B. tabaci Colonies

Extraction and Analysis of Volatiles

Compounds were identified by comparison of GC retention times and normalization of peak areas with those of internal standard and true standards whenever possible and by comparison of mass spectra with spectra of the National Institute of Standards and Technology (NIST) database. When standards were not available, the concentrations of the compounds were matched to published information (Ament et al., 2004; Kant et al., 2004).

Preferences of whiteflies to plant volatiles were determined in a Y-tube olfactometer. According to the plant volatile results, three standards of ρ-cymene, thujene and neophytadiene were used to test the preference of whiteflies. Two streams of purified air (filtered through activated charcoal) were led through two glass containers (one of standard chemical and one of purified air as control) into the olfactometer arms at 100 ml min−1. The experiment started with the release of individual female adult whitefly at the base of the Y-tube. Each whitefly was observed for a maximum of 20 min. A ‘no choice’ was recorded when the adults remained inactive during the testing period, and a choice for one of the two odor sources was recorded when the whitefly moved >5 cm onto either arm and stayed in that arm for at least 15 s. There were four whitefly populations for each odor comparison: non-viruliferous MEAM1/B, viruliferous MEAM1/B, non-viruliferous MED/Q and non-viruliferous MED/Q. For each population, preference of 30 whiteflies was tested for three times each day. Then the experiment was repeated for 3 days. That is to say, a total of 270 whiteflies in each population were tested for each odor comparison.

This work was supported by the National Key R&D Program of China (2017YFD0200400); the National Natural Science Foundation of China (31420103919, 31501643, and 31572014); the Funds for Science and Technology Innovation Project from the Chinese Academy of Agricultural Sciences (CAASXTCX2016015); the Beijing Key Laboratory for Pest Control and Sustainable Cultivation of Vegetables; and Hunan talent project (2016RS2019).

Copyright © 2018 Shi, Chen, Pan, Xie, Wu, Wang, Liu, Zhou and Zhang. This is an open-access article distributed under the terms of the Creative Commons Attribution License (CC BY). The use, distribution or reproduction in other forums is permitted, provided the original author(s) and the copyright owner are credited and that the original publication in this journal is cited, in accordance with accepted academic practice. No use, distribution or reproduction is permitted which does not comply with these terms.