Prevalent Synergy and Antagonism Among Antibiotics and Biocides in Pseudomonas aeruginosa

Antimicrobials can exert specific physiological effects when used in combination that are different from those when applied alone. While combination effects have been extensively mapped for antibiotic-antibiotic combinations, the combination effects of antibiotics with antimicrobials used as biocides or antiseptics have not been systematically investigated. Here, we investigated the effects of combinations of antibiotics (meropenem, gentamicin, and ciprofloxacin) and substances used as biocides or antiseptics [octenidine, benzalkonium chloride, cetrimonium bromide, chlorhexidine, Povidone-iodine, silver nitrate (AgNO3), and Ag-nanoparticles] on the planktonic growth rate of Pseudomonas aeruginosa. Combination effects were investigated in growth experiments in microtiter plates at different concentrations and the Bliss interaction scores were calculated. Among the 21 screened combinations, we find prevalent combination effects with synergy occurring six times and antagonism occurring 10 times. The effects are specific to the antibiotic-biocide combination with meropenem showing a tendency for antagonism with biocides (6 of 7), while gentamicin has a tendency for synergy (5 of 7). In conclusion, antibiotics and biocides or antiseptics exert physiological combination effects on the pathogen P. aeruginosa. These effects have consequences for the efficacy of both types of substances and potentially for the selection of antimicrobial resistant strains in clinical applications with combined exposure (e.g., wound care and coated biomaterials).

Here, we investigate combinatorial effects of antibiotics and biocides on the pathogen Pseudomonas aeruginosa. We chose P. aeruginosa because it is a prevalent pathogen in clinical situations in which antibiotics and antiseptics or biocides meet; i.e., it often occurs in wound infections (Percival et al., 2015; Serra et al., 2015), it is known to colonize medical implants (Percival et al., 2015), and it is known to be widespread in environmental compartments. We chose three antibiotics that are used to treat P. aeruginosa infections and seven biocides, all covering a range of classes, modes of action and applications (Table 1). 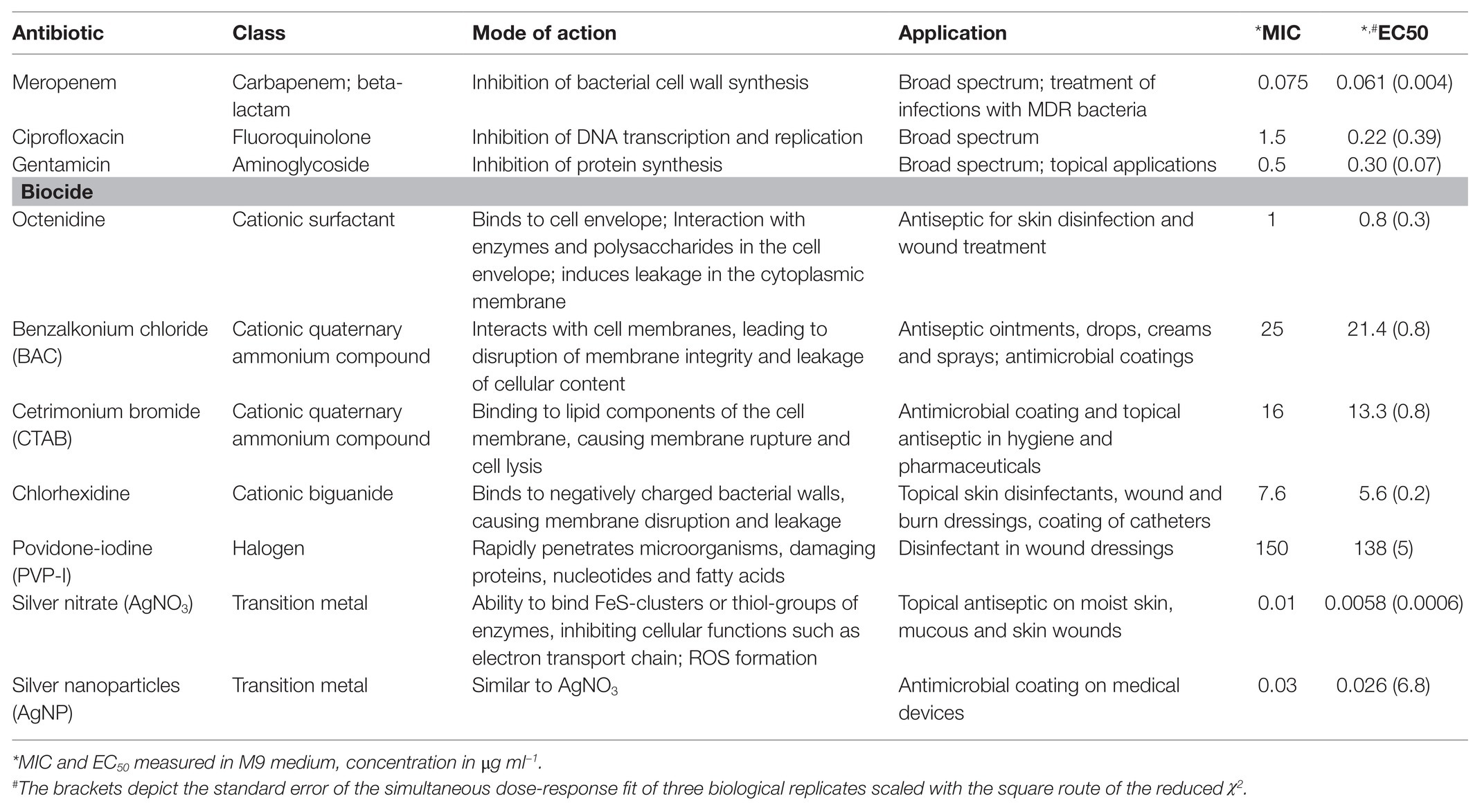 Table 1. Characteristics of antibiotics and biocides screened for interaction effects.

The experiments were performed with P. aeruginosa MPAO1 obtained from Colin Manoil (Jacobs et al., 2003; Varadarajan et al., 2020). The ancestor strain was isolated from a wound in Melbourne, Australia, in 1954 (Holloway, 1955; Chandler et al., 2019). All assays were conducted in 200 μl volume in a polypropylene (PP; PP has lower binding for positively charged biocides as compared to polystyrene) 96-well microtiter plate incubated at 37°C with shaking (fast, orbital mode) in a plate reader (EPOCH2, Biotek) with readings for OD600 obtained in a 5 min interval. The inoculum was 105 cells per ml and consisted of a pre-culture of exponential cells in M9 [5 × M9 minimal salts base from Formedium (final concentrations: 6.78 g L−1 Na2HPO4; 3 g L−1 KH2PO4; 0.5 g L−1 NaCl; 1 g L−1 NH4Cl) supplemented with 2 mM MgSO4, 100 μM CaCl2, 20 mM glucose, 25 μM FeCl3⋅6H2O, 4.95 μM ZnCl2, 2.1 μM CoCl2⋅6H2O, 2 μM Na2MoO4⋅2H2O, 1.7 μM CaCl2⋅2H2O, 2.5 μM CuCl2⋅2H2O, 2 μM H3BO3] that were stored at −80°C until use (each freezer stock was only thawed once). Defined M9 medium was chosen for the experiments instead of nutritionally-rich media such as Mueller-Hinton broth (recommended for standard antimicrobial susceptibly testing) to generate data that can be reproduced despite apparent differences between different Mueller-Hinton brands (Ahman et al., 2020), to minimize interactions between medium and biocides, and to allow tracing of the molecular mechanism relative to general metabolism in a balanced medium with a single carbon and nitrogen source.

Determination of MIC and EC50

Minimum inhibitory concentrations (MIC) were determined by broth microdilution according to the standard method described previously (Wiegand et al., 2008) with the following modifications: M9 was used as growth medium, microtiter plates were incubated under shaking conditions, and pre-cultures were used from exponential cultures that were stored at −80°C and thawed on ice prior to the experiment. Wells were inoculated with 5 × 103 CFU per well containing 200 μl medium. OD600 values were recorded in a microplate reader (BioTek EPOCH 2, intermediate linear shaking, 37°C) every 5 min for 24 h. All measurements were run at least in triplicate. The lowest concentration for which no growth was observed in all replicates based on OD600 after 24 h was set as MIC. Wells containing only M9 and the specific antimicrobial substance without cells served as background control. In parallel, half-maximal effective concentrations (EC50) were derived from maximum growth rates at different antimicrobial concentrations. The growth rate was calculated from the increase in OD600 over time by inferring the time derivative using Gaussian processes implemented as published code (Swain et al., 2016) in Python 3.6 and fitting a dose-response model to the data of the combined three biological replicates (DoseResp fit, Origin 2019 v9.6, OriginLab).

A three-step procedure was used to identify physiological interactions of antibiotics and biocides. First, we determined the minimal inhibitory concentrations MICs and EC50 of all compounds in isolation (see section above, Table 1). Secondly, for each antibiotic-biocide combination, we determined the growth rates of seven biological replicate cell populations in M9 minimal medium (i) without antimicrobials, (ii) with the antibiotic alone at approximately the EC50, (iii) with five concentrations close to the EC50 of the biocide alone (see Supplementary Table S1), and (iv) with five combinations of the antibiotic at approximately EC50 supplied simultaneously with the biocide at five concentrations close to the EC50 (exactly those as measured in the “biocide alone” treatment). Each antibiotic-biocide combination was tested in parallel on the same day to minimize day-to-day variations in growth rate effects of antibiotics, which emerged due to steep dose-response curves and which were especially apparent for meropenem (Figure 1). Thirdly, we calculated the interaction effects of the combinations based on the Bliss independence model (Bliss, 1939).

The Bliss independence model was chosen because it is recommended for compounds that affect different target sites (Baeder et al., 2016) as expected for antibiotics and biocides. An alternative model is Loewe additivity including the popular checkerboard assay with calculation of the factorial inhibition concentration index (Loewe, 1953; Hallander et al., 1982). It has been shown that Bliss independence (response additivity) and Loewe (dosage additivity) give robust results when calculating effects of pairwise combinations of a large array of antibiotics (Russ and Kishony, 2018). The Bliss interaction score (S) was defined as the difference between the measured combined effect (EAB) and the summed, single effects of the antibiotics (EA) and the biocides (EB); S = EAB−(EA + EB) (Russ and Kishony, 2018). An additive definition of the Bliss model was used because the effects were based on growth rates rather than yield measurements (Baeder et al., 2016; Russ and Kishony, 2018). All effects of antimicrobials or their combinations (Ei) were calculated as the difference between the measured growth rate without antimicrobial (g0) and the growth rates with antimicrobials (gi), relative to the growth rate without antimicrobial; Ei = (g0−gi)/g0 (Russ and Kishony, 2018). Bliss interactions scores of each antibiotic-biocide combination were calculated for each of the seven biological replicates separately and tested for normality with a Kolmogorov-Smirnov test (normality was not rejected for any biocide-antibiotic combination at p < 0.05, Origin 2019 v9.6). Next, the Bliss interactions scores of each antibiotic-biocide combination were tested for a significant deviation from zero (additive combination effect) with a one-sample t-test (Origin 2019 v9.6, OriginLab, at p < 0.05).

The results show prevalent combination effects when antibiotics and biocides were applied simultaneously with synergy occurring six times and antagonism occurring 10 times among the 21 screened combinations (Figures 1, 2). The effects are specific to the antibiotic-biocide combination, with some apparent patterns. Interactions of biocides with meropenem were predominantly antagonistic (6 of 7, except for cetrimonium bromide (CTAB), which showed no significant interaction), while interactions of biocides with gentamicin were predominately synergistic (5 of 7, except for CTAB and chlorhexidine, which both were antagonistic). For ciprofloxacin, we detected three significant interactions; octenidine, silver nitrate (AgNO3; antagonism), and chlorhexidine (synergy).

Figure 2. Synergy and antagonism between antibiotics and biocides based on Bliss interaction scores. Red colors depict antagonistic and blue colors depict synergistic interactions. Combinations displayed in colors were significant according to a one-sample t-test (p < 0.05). Combinations displayed in gray were not significant. Note that our assay cannot fully exclude synergy or antagonism for those combinations shown in gray. These interactions might be detectable if more combinations of different concentrations are tested.

Biocides with similar chemistries mostly showed consistent interactions with different antibiotics. For example, cationic surfactants (octenidine) and cationic quaternary ammonium compounds [QACs, here benzalkonium chloride (BAC)] were antagonistic with meropenem and synergistic with gentamicin. However, CTAB, which is also a cationic QAC, did not show an interaction with meropenem and was antagonistic with gentamicin. Moreover, AgNO3 and silver nanoparticles (AgNP) were antagonistic with meropenem and synergistic with gentamicin. The observed interactions between antibiotics and silver are consistent with previous reports that showed synergistic effects between aminoglycosides and silver on killing of planktonic Escherichia coli (Morones-Ramirez et al., 2013) and biofilms of P. aeruginosa (Habash et al., 2017), and that showed no effect on planktonic growth of P. aeruginosa ATCC 10145 for the ciprofloxacin-AgNP combination (Markowska et al., 2014). In contrast, the antagonistic effect between AgNP and meropenem apparent in our data has not been observed previously in P. aeruginosa ATCC 10145 (Markowska et al., 2014). In addition, a strain-specific, synergistic effect between chlorhexidine and gentamicin for clinical isolates of P. aeruginosa has been described previously (Barnham and Kerby, 1980), while our data show antagonistic effects on strain MPAO1.

Here, we present the first comprehensive screen of physiological interactions of antibiotic-biocide combinations in P. aeruginosa. This data will provide the basis for designing improved treatment protocols in which biocides/antiseptics and antibiotics are used in combination. This might be particularly important in situations in which these antimicrobials establish concentration gradients. Such gradients may lead to the establishment of relevant combinatorial concentrations that then might lead to combination effects on growth. The results provide the basis for future work that should focus on (i) confirming the combination effects with other established concepts such as Loewe additivity (including the factorial inhibition concentration; Hallander et al., 1982), (ii) expand the screen for combination effects to other antibiotics (e.g., antimicrobial peptides) and antiseptics/biocides, (iii) mapping the occurrence of the combination effects across P. aeruginosa clinical isolates and other pathogens, and (iv) investigating the molecular mechanism behind the combination effects by gene expression or knockout studies. Moreover, future research should explore potential evolutionary consequences of the physiological interaction effects between antibiotics and biocides. This is relevant because the nature of the physiological interaction (synergy or antagonism) has been shown to underpin selection for or against antimicrobial resistant strains in competition with sensitive strains exposed to combinations of antimicrobials (Chait et al., 2007, 2016; Baym et al., 2015; Rezzoagli et al., 2020).

This work was funded by a grant of the Joint Programming Initiative on Antimicrobial Resistance (JPI-EC-AMR); BEAT-AMR project funded by BMBF (#01KI1710) and by BAM.

The Supplementary Material for this article can be found online at: https://www.frontiersin.org/articles/10.3389/fmicb.2020.615618/full#supplementary-material

Copyright © 2021 Pietsch, Heidrich, Nordholt and Schreiber. This is an open-access article distributed under the terms of the Creative Commons Attribution License (CC BY). The use, distribution or reproduction in other forums is permitted, provided the original author(s) and the copyright owner(s) are credited and that the original publication in this journal is cited, in accordance with accepted academic practice. No use, distribution or reproduction is permitted which does not comply with these terms.