It is an established enological practice to use commercial Saccharomyces cerevisiae to ferment wine. Pure S. cerevisiae fermentation has an easy control fermentation process and a high consistency of product quality between batches, but it is easy to lead poor flavor complexity and varietal aroma characteristics of wine which are mainly contributed by varietal, fermentative, and aging aroma compounds (Pires et al., 2014).

Several non-Saccharomyces yeast strains have been confirmed to have β-glucosidase activity, including Hanseniaspora uvarum, Pichia fermentans, Pichia membranifaciens, Wickerhamomyces anomalus, and Rhodotorula mucilaginosa, and they can improve the content of some volatile aroma compounds such as terpenes and benzene derivatives, imparting fruity and floral flavor profile to wine (Sabel et al., 2014; López et al., 2015, 2016; Ovalle et al., 2016; Ma et al., 2017; Sun et al., 2017). Four non-Saccharomyces yeast strains I. terricola SLY-4, P. kudriavzevii F2-24, P. kudriavzevii F2-16, and M. pulcherrima HX-13 were isolated from vineyards of the Helan Mountain region in Ningxia of China by our research group, which produced 98.51, 76.93, 62.72, and 47.95 U/l β-glucosidase activities, respectively (Wang et al., 2018). Adding crude extraction of β-glucosidases from I. terricola SLY-4, P. kudriavzevii F2-24, and M. pulcherrima HX-13 into must could increase the content of terpenes, esters, and fatty acids and enhance the fruity and floral aroma of wine fermented by S. cerevisiae. Wines using different crude β-glucosidase extractions presented distinct volatile compound profiles and varied typical flavor characteristics (Zhang et al., 2020). These results indicated that β-glucosidases from the four non-Saccharomyces yeast strains could enhance the content of aroma compounds with different profiles and improve the fruity and floral aroma of wine. However, the positive or negative effects of these four non-Saccharomyces yeast strains as main brewing yeast on wine-making are not yet known.

To investigate the effects of pure fermentations of I. terricola SLY-4, P. kudriavzevii F2-24, P. kudriavzevii F2-16, or M. pulcherrima HX-13 on flavor complexity and varietal aroma characteristics of wines, the process and the quality of their pure fermentations will be analyzed. Research results will provide some references of using non-Saccharomyces yeast strains to improve the flavor complexity and varietal characteristics of wines.

Cabernet Sauvignon grapes from a vineyard of the Helan Mountain region in Ningxia of China were destemmed and crushed into must (239.9 g/l total sugar calculated as glucose and 7.1 g/l total acid calculated as tartaric acid, pH 3.96). Eight hundred milliliters of must was filled into a 1.0–l glass bottle, pasteurized at 68.5°C for 30 min. After adding 50 mg/l SO2, the must was macerated at 4°C for 12 h, and yeast cells were inoculated at 106 CFU/ml and fermented at 20°C without agitation. Each kind of yeast was inoculated in triplicate.

Samples were taken during fermentation every day and concurrently diluted onto a YPD plate, then incubated at 28°C for 3 days (Suárez et al., 2007). Colonies on the YPD plate were counted as the viable cells of S. cerevisiae or non-Saccharomyces yeast. Each sample was analyzed in triplicate from the bottles.

The extraction of volatile aroma compounds from wine was conducted by headspace solid-phase microextraction with 50/30 μm divinylbenzene carboxen polydimethylsiloxane (DVB/CAR/PDMS) fiber (Supelco, Bellefonte, PA, United States). The extracted volatile compounds were analyzed on an Agilent 6890N gas chromatograph (GC) coupled to an Agilent 5975B mass spectrometer with a DB-5 capillary column (30 m × 0.32 mm × 0.25 μm). An 8-ml sample containing 0.45 g cyclohexanone (internal standard) and 2 g NaCl was put in a 20-ml headspace bottle and stirred by a magnetic bar at 40°C for 15 min. After that, the fiber was exposed to the headspace of bottle for 30 min and immediately desorbed in an injector at 250°C for 3 min. The operating conditions of GC were the following: initial temperature 40°C, increased to 130°C at 3°C/min, then to 250°C at 4°C/min. The injector and detector were set at 250 and 260°C, respectively. The mass spectrometry was operated in electron impact ionization mode at 70 eV, and ion source temperature was 250°C. Detection was carried out in full-scan mode over a range of 30–350 u/s. Compounds were identified by comparing their retention time with MS fragmentation patterns which were obtained from databases Wiley 7.0 and NIST05. All volatile compounds were semi-quantified through the following formula:

The sensory evaluation was performed as described by Belda et al. (2015) with modification. Twenty milliliters of wine was poured into wine glasses and presented in random order. The preferences for appearance, aroma (fruity, floral, and green), and taste of the wine were scored from 0 (weak) to 9 (intense) by a well-trained panelist (six females and four males) from Huazhong Agricultural University, respectively. The final score of each sensory characteristic was the mean value of 10 scores given by 10 assessors, respectively. 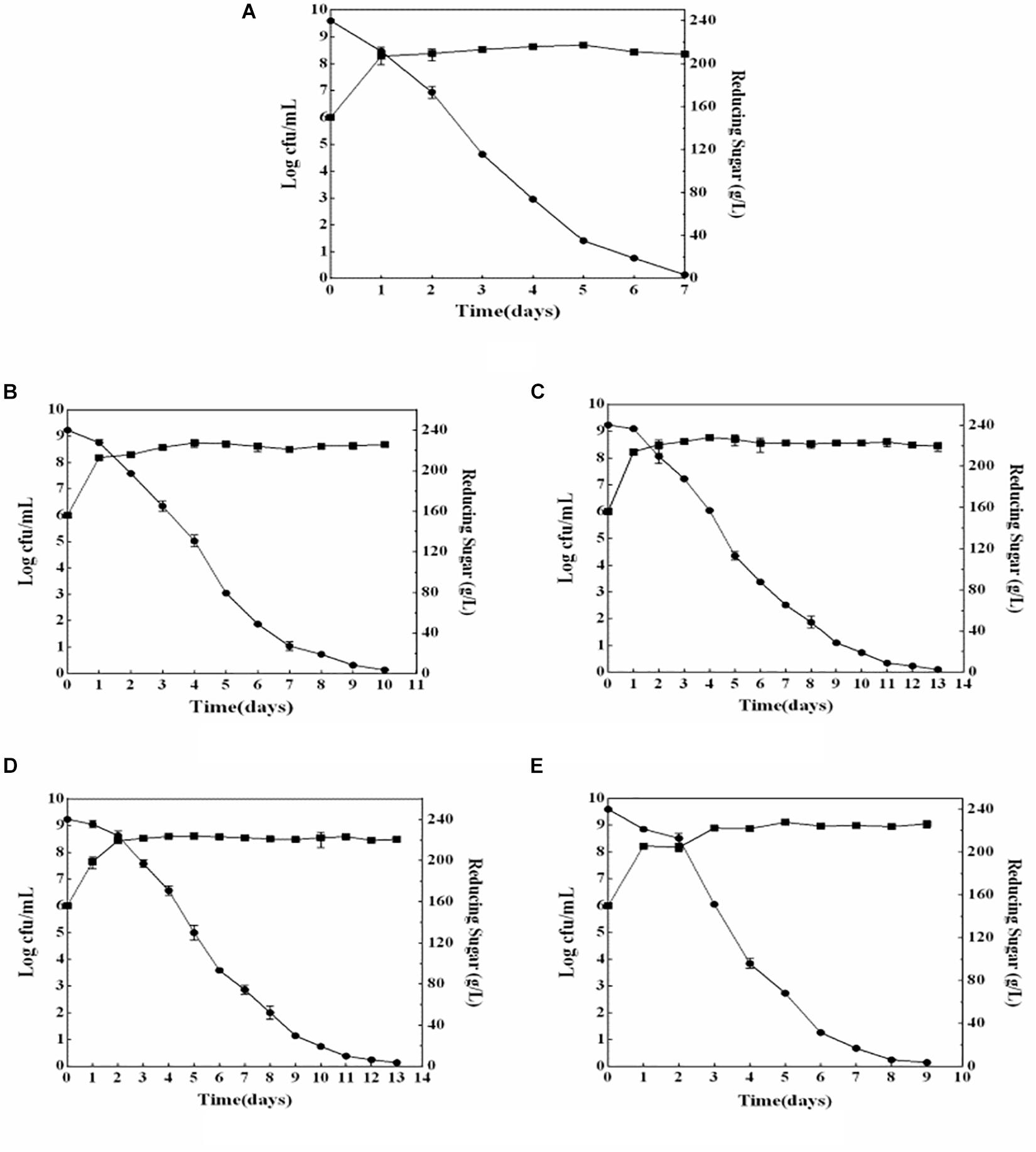 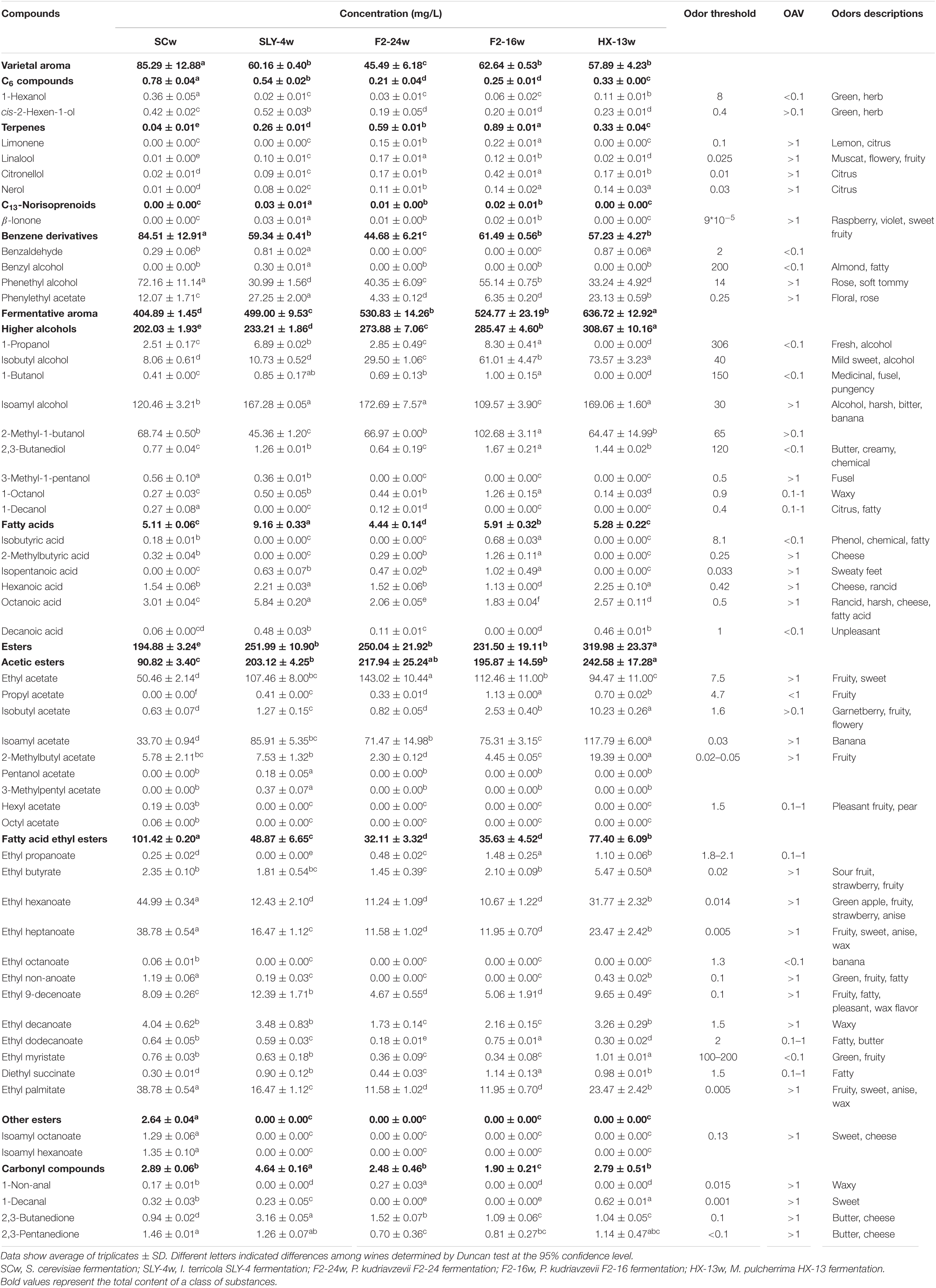 The effects of non-Saccharomyces yeast strains on the aroma compounds were evaluated as follows. 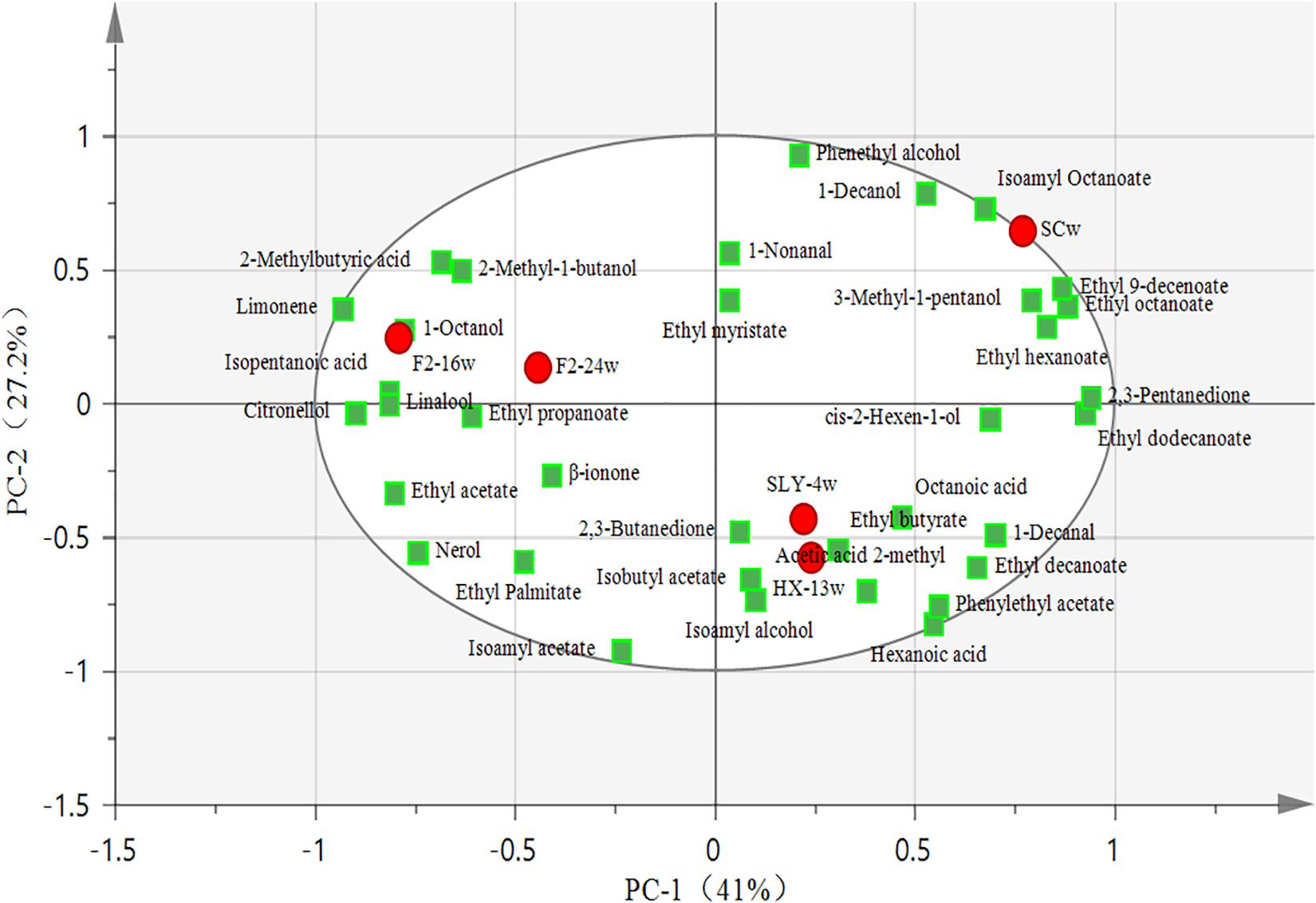 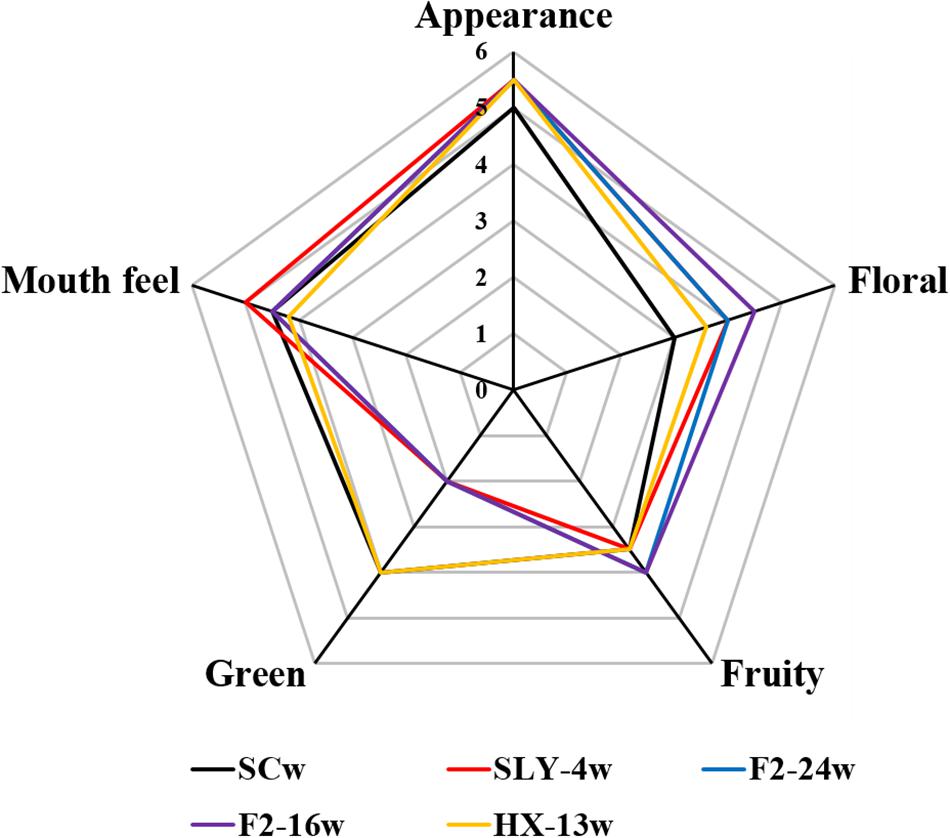 Compared with those of the S. cerevisiae single fermentation, the four non-Saccharomyces yeast strains had higher biomasses and longer fermentation periods which were also reported by Andorrà et al. (2010) and Belda et al. (2015). Those results mean that the four non-Saccharomyces yeast strains consumed sugar more slowly than S. cerevisiae did, but they could consume it completely.

This research was supported by the National Natural Science Foundation Project of China (31871768) and the Major Science and Technology Program of Ningxia Hui Autonomous Region (2016BZ0601/02/03).

Copyright © 2021 Qin, Liao, Zheng, Zhang and Zhang. This is an open-access article distributed under the terms of the Creative Commons Attribution License (CC BY). The use, distribution or reproduction in other forums is permitted, provided the original author(s) and the copyright owner(s) are credited and that the original publication in this journal is cited, in accordance with accepted academic practice. No use, distribution or reproduction is permitted which does not comply with these terms.

From Traditional to Modern: Progress of Molds and Yeasts in Fermented-Food Production