The first two known isolates of CC361-MRSA were isolated in Kuwait in 2010 from two patients in two different hospitals (Boswihi et al., 2016). Since then, the proportion of MRSA isolates belonging to CC361-MRSA has been increasing annually (Boswihi et al., 2018, 2020a, 2020b). In this study, we investigated CC361-MRSA isolated from patients in public hospitals in Kuwait from 1 January, 2016 to 31 December, 2018, using staphylococcal protein A (spa) typing, multi-locus sequence typing (MLST) and DNA microarray to determine their antibiotic resistance and virulence profiles, and genetic relatedness.

Spa typing was performed using protocol and primers published previously (Harmsen et al., 2003). Bacterial DNA isolation for amplification studies was performed as described previously (Boswihi et al., 2018). Three to five identical colonies of an overnight culture were picked using a sterile loop and suspended in a microfuge tube containing 50 μL of lysostaphin (150 μg/mL) and 10 μL of RNase (10 μg/mL) solution. The tube was incubated at 37°C in the heating block (ThermoMixer, Eppendorf, Hamburg, Germany) for 20 min. To each sample, 50 μL of proteinase K (20 mg/mL) and 150 μL of Tris buffer (0.1 M) were added and mixed by pipetting. The tube was then incubated at 60°C in the water bath (VWR Scientific Co., Shellware Lab, United States) for 10 min. The tube was transferred to a heating block at 95°C for 10 min to inactivate proteinase K activity. Finally, the tube was centrifuged, and the supernatant containing extracted DNA was stored at 4°C till used for PCR.

The PCR protocol consisted of an initial denaturation at 94°C for 4 min, followed by 25 cycles of denaturation at 94°C for 1 min, annealing at 56°C for 1 min, and extension for 3 min at 72°C, and a final cycle with a single extension for 5 min at 72°C. Five μL of the PCR product was analyzed by 1.5% agarose gel electrophoresis to confirm amplification. The amplified PCR product was purified using Micro Elute Cycle-Pure Spin kit (Omega Bio-tek, Inc., United States) and the purified DNA was then used for sequencing PCR. The sequencing PCR product was then purified using Ultra-Sep Dye Terminator Removal kit (Omega Bio-tek, Inc., United States). The Purified DNA was sequenced in an automated 3130x1 genetic analyzer (Applied Biosystem, United States). The sequenced spa gene was analyzed using the Ridom Staph Type software (Ridom GmbH, Wurzburg, Germany).

DNA microarray analysis was performed using the Identibac S. aureus genotyping kit 2.0 and the ArrayMate reader (Alere Technology, Jena, Germany) as described previously by Monecke et al. (2011). The DNA microarray analysis was used for the simultaneous detection of SCCmec types, antibiotic resistance genotypes and virulence related genes, including PVL, genes encoding species markers, and to allocate clonal complex (CC). S. aureus genotyping array is presented in an ArrayStrip format which contains 336 probes printed onto an array located in the bottom of the ArrayStrip. MRSA isolates were grown on blood agar plates at 35°C overnight. DNA extraction of the overnight culture was performed as described by the manufacturer using Identibac S. aureus genotyping kit 2.0 (Alere, GmbH, Germany). Linear amplification of the purified DNA was performed in a total of 10 μL of the reaction volume containing 4.9 μL of B1 (labeling reagent), 0.1 μL of B2 (DNA polymerase), and 5 μL of the purified DNA. The PCR protocol consisted of an initial denaturation for 5 min at 96°C, followed by 50 cycles of denaturation for 60 s at 96°C, annealing for 20 s at 50°C, and extension for 40 s at 72°C. hybridization and washing of the labeled arrays were performed as previously described (Monecke et al., 2011). The array was scanned using the ArrayMate reader (CLONDIAG, Alere, Germany) and the image of the arrays was recorded and analyzed using IconoClust software plug-in (CLONDIAG). The result was interpreted as negative, positive, or ambiguous by the software.

MLST was performed for representative isolates belonging to different spa types. The amplification of the seven housekeeping genes was performed using previously described M13-tailed primers (Tan et al., 2006). The amplified targets were sequenced with one pair of M13-tailed primers: 5′-TGTAAAACGACGGCCAGT-3′ and 3′-CAGGAAACAGCTATGACC-5′. The sequencing PCR protocol consisted of initial denaturation for 1 min at 94°C, followed by 25 cycles of denaturation for 10 s at 96°C, annealing at 55°C for 5 s, and extension for 4 min at 66°C. DNA sequencing was performed using a 313091 genetic analyzer (Applied Biosystems, Foster City, CA, United States) in accordance with the manufacturer’s protocol. The sequences were submitted to http://www.pubmlst.net/ where an allelic profile was generated and the sequence type (ST) assigned.

Molecular Characteristics of the CC361-MRSA Isolates

Antibiotic Resistance Phenotypes and Genotypes of the CC361-MRSA Isolates

The distribution of the antibiotic resistance genes of the CC361-MRSA isolates is presented in Table 2. There was general concordance between resistance phenotypes and genotypes. The penicillin resistance encoding genes blaZ and its regulatory genes, blaI and blaR were found in 177 isolates, while aminoglycoside (gentamicin and kanamycin) encoding genes aacA-aphD, aphA3, and aadD were detected in 12, 65, and 2 isolates, respectively. The five isolates that were negative for blaZ, blaI, and blaR, were susceptible to penicillin G and negative for penicillinase production but were positive for mecA and SCCmec genetic elements. 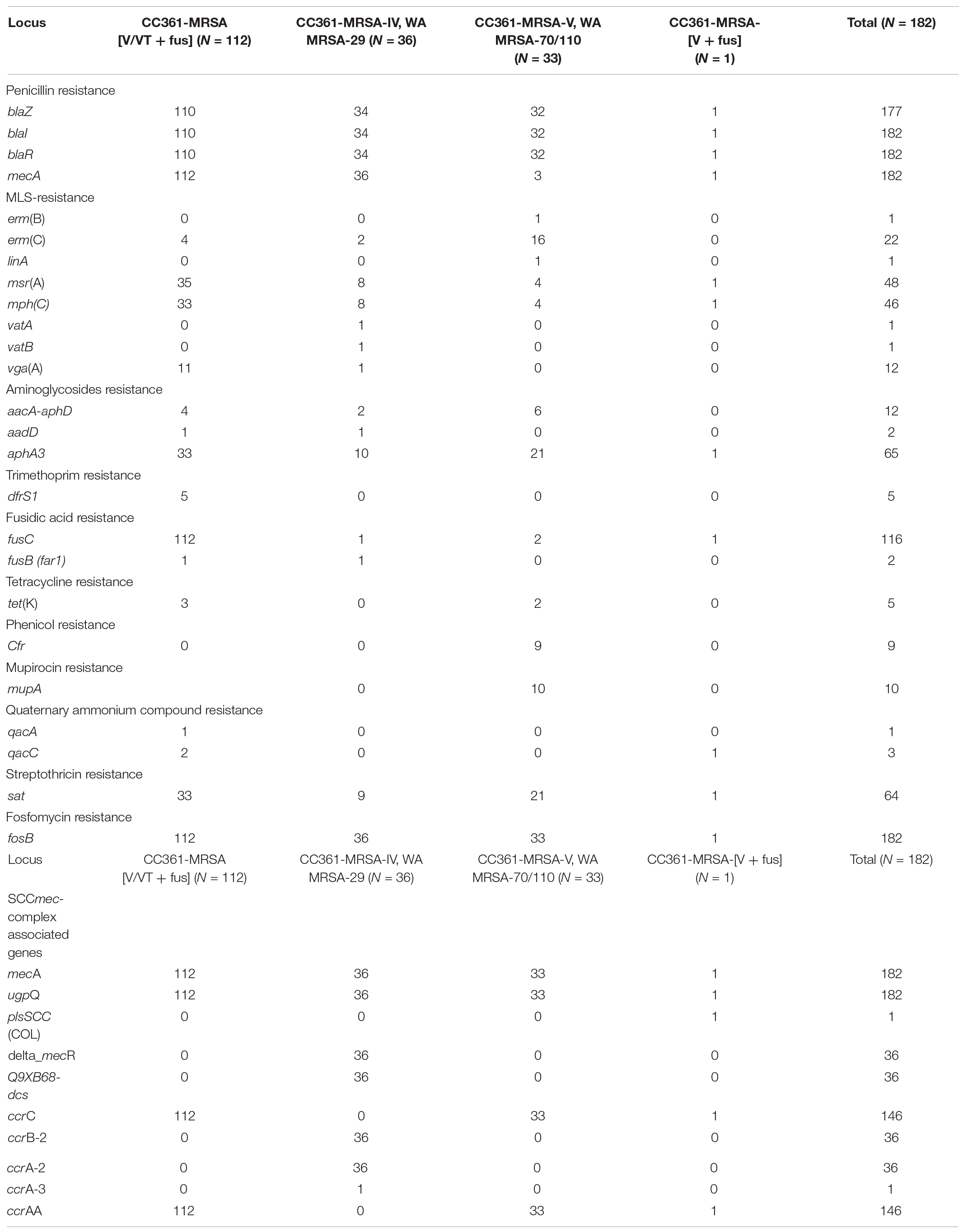 Table 2. Distribution of antibiotic resistance genes of CC361-MRSA isolates from 2016 to 2018.

The prevalence of the virulence factors amongst the CC361 MRSA isolates are presented in Table 3. All 182 isolates were positive for genes encoding the accessory gene regulator type I (agrI) and capsular polysaccharide type 8 (cap8) but lacked genes for Panton Valentine Leukocidin (PVL). 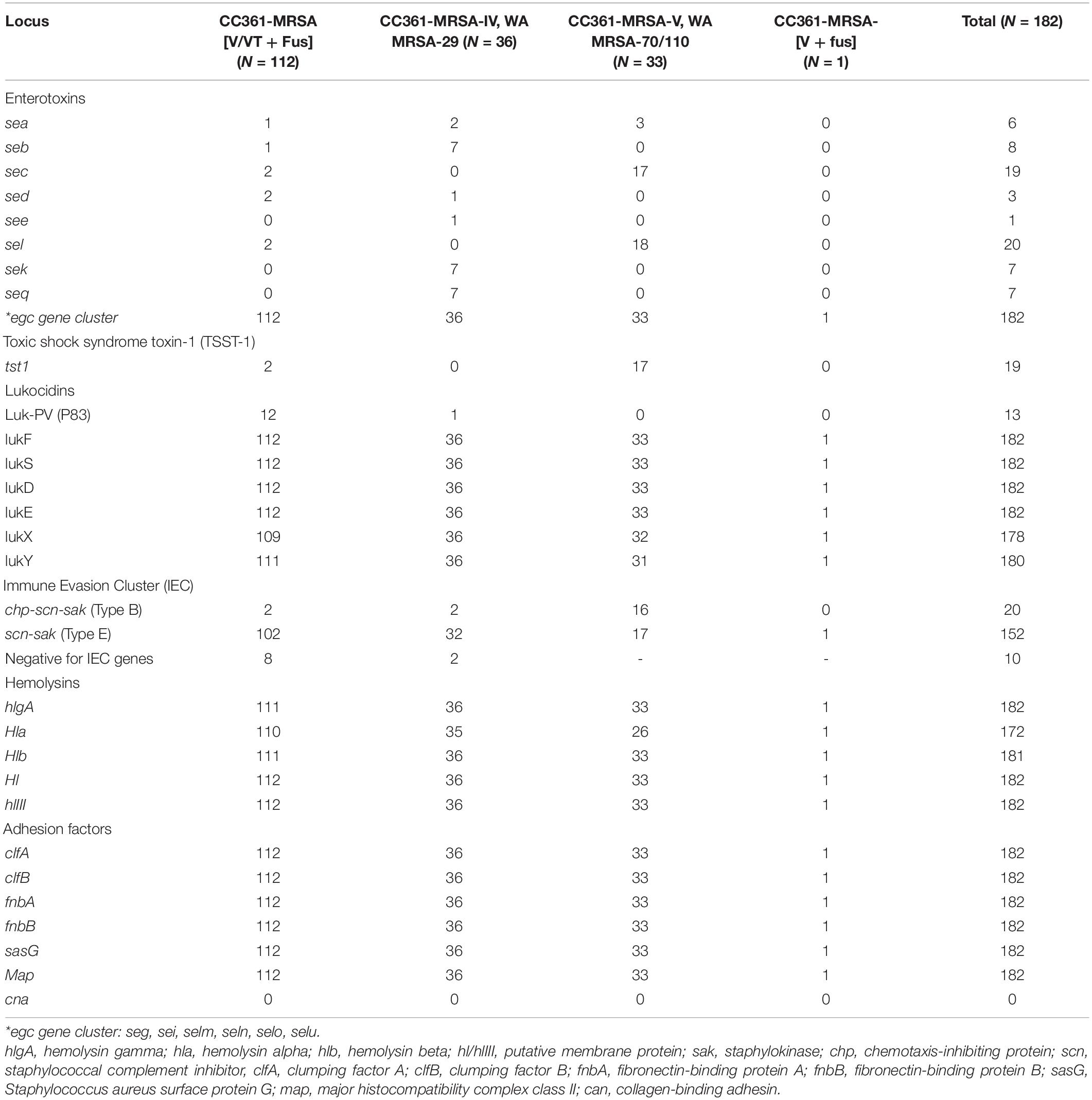 The isolates were obtained from different clinical samples including wound swabs, nasal swabs, blood culture, vaginal swabs, sputum, tracheal aspirates, and urine highlighting the capacity of the CC361-MRSA isolates to colonize or cause superficial as well as invasive infections.

DNA microarray analysis revealed different genotypes dominated by CC361-MRSA [V/VT + Fus] which constituted 61.5% of the isolates. The other genotypes detected were CC361-MRSA-V WA MRSA-29 (N = 36; 19.8%), CC361-MRSA-V WA MRSA-70/110 (N = 33; 18.1%) and CC361-MRSA-[V + fus] variant (N = 1; 0.5%). Although there were no significant differences in the distribution of the four CC361 genotypes from 2016 to 2018, the CC361-MRSA [V/VT + fus] isolates increased from 31 in 2016 to 71 in 2018 (Table 1) suggesting its higher transmission capacity. The acquisition of the variant V/VT genetic element represents an evolutionary event that probably confers greater capacity to spread. Although this clone appears to be restricted to the countries of the Gulf at this time, it has the potential to spread widely as the highly virulent USA300 MRSA clone that emerged initially as a less virulent and less resistant clone (Strauß et al., 2017). The USA300 MRSA clone gradually acquired multiple antibiotic resistance, SCCmec Iva genetic element, genes for PVL, arginine catabolic mobile element, and a specific mutation in capsular polysaccharide gene, capSE and became highly transmissible following its introduction to North America from Central Europe (Strauß et al., 2017).

Besides the diversity in spa types, the insolates in this study harbored different SCCmec types consisting of SCCmec types IV, V and V/VT that are usually associated with community-associated genotypes. Apart from SCCmec V/VT, SCCmec types IV and V were also reported in CC361-MRSA from human patients in Western Australia (Monecke et al., 2011), Ireland (Kinnevey et al., 2014) and Bangladesh (Afroz et al., 2008), Abu Dhabi (Weber et al., 2010), Oman (Udo et al., 2014) and Saudi Arabia (Senok et al., 2019) and in animals in Nepal (Roberts et al., 2019) and Czech Republic (Tegegne et al., 2017). CC361 isolates were also reported to harbor SCCmec VIII in Australia where it is known as WA MRSA-28 (Nimmo and Coombs, 2008). These observations demonstrate the ability of CC361 to acquire different SCCmec elements. The detection of SCCmec V/VT together with spa type t3841 only in the current isolates supports the recent emergence of these strains in the GCC countries.

The CC361-MRSA isolates were resistant to different antibiotics including gentamicin, kanamycin, erythromycin, clindamycin, tetracycline, trimethoprim fusidic acid and high-level mupirocin and harbored aacA-aphD, aphA3, msrA, tet(K), dfrS1, fusC, and mupA mediating resistance to the corresponding antibiotics as has been reported in isolates from Saudi Arabia (Senok et al., 2019), Abu Dhabi (Monecke et al., 2011), and Australia (Coombs et al., 2011). All the 112 ST672-MRSA-[V/VT + fus] isolates harbored fusC and was responsible for the high prevalence of fusidic acid resistance in this study. Fusidic acid resistance mediated by fusC was also reported in CC361-MRSA isolates obtained from dental room environment and human patients in Saudi Arabia (Senok et al., 2019). Fusidic acid resistance has remained a major problem in MRSA isolates in Kuwait for some years, and has been suggested to be due to independent acquisition of fusidic acid determinants in isolates belonging to diverse backgrounds, and the consumption of over the counter fusidic acid preparations which are available without prescription in the country (Boswihi et al., 2018).

Most of the CC361- MRSA isolates in this study harbored type E (scn, sak) (N = 152; 83.5%) or type B (scn, chp, and sak) (N = 20; 11.0%) immune evasion cluster genes. Likewise, CC361-MRSA reported in Australia (Coombs et al., 2011) Saudi Arabia (Senok et al., 2019), and United Arab Emirates (Senok et al., 2020) also carry either type E or type B immune evasion cluster (IEC) genes. The immune evasion cluster genes binds specifically with compounds of the human innate immune system to protect bacteria from the human innate immune system (Resch et al., 2013; Sieber et al., 2020) and are therefore used to distinguish S. aureus of human from those of animal origin since human isolates harbor the IEC genes (Resch et al., 2013). The presence of IEC carrying S. aureus in animals usually suggests human contamination (Resch et al., 2013; Sieber et al., 2020). Viewed from this perspective, the presence of type E (scn and sak) IEC in CC361- MRSA that were recovered from monkeys (Roberts et al., 2019) which is similar to the IEC content of 94.5% of our isolates may suggest a human origin for the monkey isolates. Although CC361-MRSA have also been isolated from cattle (Tegegne et al., 2017), and ready to-eat-food (Islam et al., 2019) the IEC genes contents of these isolates were not reported. Hence it is not possible to speculate their origin. Ten of the isolates in this study consisting of five ST672-MRSA-V/VT + Fus/t3841 and five ST672-MRSA-IV, WAMRSA 29/t14690/t14271/t1309/t3175/3841 were negative for IEC genes suggesting the loss of the bacteriophage that bears the IEC genes.

In conclusion, this study reports an increase in the prevalence of the CC361-MRSA isolates with the dominance and transmission of a newly emerged ST672-MRSA [V/VT + fus] genotype in Kuwait hospitals. The CC361-MRSA isolates expressed resistance to different antibiotics including linezolid resistance observed for the first time in Kuwait. The isolates were negative for genes encoding PVL but harbored common enterotoxins encoding genes (e.g., egc gene cluster). The detection of the various virulence genes in these isolates and their isolation from different clinical samples indicate their capacity to cause serious infections like other virulent MRSA lineages. Continuous surveillance is necessary to monitor and evaluate emerging MRSA clones in Kuwait to assist in developing better means of prevention and management.

We are grateful to the technical staff in the MRSA Reference Laboratory located in Department of Microbiology, Faculty of Medicine, for their technical assistance.

Hassoun, A., Linden, P. K., and Friedman, B. (2017). Incidence, prevalence, and management of MRSA bacteremia across patient populations-a review of recent developments in MRSA management and treatment. Crit. Care 21:211.

Copyright © 2021 Sarkhoo, Udo, Boswihi, Monecke, Mueller and Ehricht. This is an open-access article distributed under the terms of the Creative Commons Attribution License (CC BY). The use, distribution or reproduction in other forums is permitted, provided the original author(s) and the copyright owner(s) are credited and that the original publication in this journal is cited, in accordance with accepted academic practice. No use, distribution or reproduction is permitted which does not comply with these terms.

From Genomics to Antibiotic Resistance in Emerging Pathogens