Purpose: Cerebral aspergillosis (CA) is a rare but often fatal, difficult-to-diagnose, opportunistic infection. The utility of metagenomic next-generation sequencing (mNGS) for diagnosis of CA is unclear. We evaluated the usefulness of mNGS of the cerebrospinal fluid (CSF) for the diagnosis of CA.

Methods: This prospective study involved seven consecutive patients with confirmed CA in whom CSF mNGS was performed. Serum (1→3)-β-D-glucan and galactomannan levels were determined, and histopathological examination and mNGS of the CSF were conducted. CSF specimens from three non-infected patients were used as positive controls.

Results: mNGS of the CSF was positive in six of the seven confirmed CA cases (85.71% sensitivity). In the cryptococcal meningitis group (control), mNGS of the CSF was positive for Aspergillus in two patients (84.62% specificity). The positive likelihood ratio, negative likelihood ratio, and Youden’s index of mNGS for CA in the CSF were 5.565, 0.169, and 0.7, respectively. Among the six mNGS-positive cases, more than two Aspergillus species were found in four (4/6, 66.67%). In the positive controls, the addition of one A. fumigatus spore yielded a standardised species-specific read number (SDSSRN) of 25.45 by mNGS; the detection rate would be 0.98 if SDSSRN was 2.

Conclusion: mNGS facilitates the diagnosis of CA and may reduce the need for cerebral biopsy in patients with suspected CA.

Cerebral aspergillosis (CA) is a rare and life-threatening opportunistic infection caused by Aspergillus species. This notorious complication of invasive aspergillosis, which accounts for 5–10% of all intracranial fungal pathologies (Ellenbogen et al., 2016), is associated with a >90% mortality rate (Walsh et al., 2008). The major risk factors for invasive aspergillosis include bone marrow transplant (32%), haematological malignancy (29%), solid organ transplant (9%), pulmonary diseases (9%), and acquired immunodeficiency syndrome (8%) (Patterson et al., 2000). CA typically involves haematogenous dissemination from pulmonary lesions, iatrogenic inoculation during surgery or spinal anaesthesia, or direct extension from infections of the ear, orbital, or paranasal sinuses (McCarthy and Walsh, 2017; Winterholler et al., 2017). The gold standard for diagnosing CA is histopathological evidence or a positive culture result for a biopsy or cerebrospinal fluid (CSF) specimen (Walsh et al., 2008). However, these methods are time-consuming, laborious, and have variable sensitivity and specificity (McCarthy and Walsh, 2017). Therefore, confirmation of CA is problematic, and the misdiagnosis rate is high (Wang et al., 2017).

Metagenomic next-generation sequencing (mNGS) enables diagnosis of infectious diseases of the central nervous system (CNS) (Ramachandran and Wilson, 2020) and is increasingly being used in the clinic (Wilson et al., 2014, 2019; Guan et al., 2016; Fan et al., 2018; Wang et al., 2019). mNGS of the CSF can identify pathogens of infectious diseases of the CNS (Xing et al., 2020). However, whether mNGS can detect Aspergillus, which is widespread in the environment (Cadena et al., 2016), and assist the diagnosis of CA is unclear. Here, we present seven cases of biopsy-confirmed CA to evaluate the performance of mNGS of CSF for detecting CA.

We prospectively identified seven consecutive patients with confirmed CA admitted to two teaching hospitals in Beijing, China between November 2016 and September 2019. We recorded the patients’ clinical data, including relevant medical history, physical examination findings, routine blood examinations, CSF parameters, and neuroimaging findings. Diagnosis of CA was confirmed by CSF culture or histopathological evidence. Because of the similar risk factors for CA and cryptococcal meningitis (CM), 13 patients with CM confirmed by CSF India ink smear and/or culture were used as controls.

Sterile CSF was collected from three non-infected patients who required lumbar puncture and divided into three 0.6-mL tubes. Next, different concentrations of Aspergillus spores (A. fumigatus B5233 wild type) were added to sterile CSF for sensitivity testing of mNGS in spiked specimens and as positive controls. The number of A. fumigatus spores in the three 0.6-mL amounts of CSF was 50, 250, and 500.

The sequencing data were analysed in terms of species-specific read number (SSRN), genome coverage (%), and depth. Aspergillus species with an SSRN ≥ 2 were considered positive. The data interpretation method has been described in detail elsewhere (Xing et al., 2020).

Continuous data were subjected to non-parametric tests. Quantitative variables are expressed as medians (ranges) and qualitative variables as percentages. Data processing was performed using SPSS software (version 23.0; IBM Corp., Armonk, NY, United States). We performed a linear regression of SSRN and the number of spores that transected the origin. Because the total number of reads obtained from mNGS varied among samples, we first standardised the SSRN to obtain the standardised species-specific read number (SDSSRN) for comparison purposes. The standardised ratio (SR) was calculated as the number of total reads × (1-adaptor ratio)/20,000,000 (Huang et al., 2020). Twenty million was the expected number of total reads after the removal of all adaptors. The SDSSRN was calculated as SSRN/SR, and the spores (n = 50, 250, and 500) were mapped to SDSSRNs.

We assessed the probability of A. fumigatus detection given an SDSSRN of 2, the former standard for A. fumigatus detection. We hypothesised that the probability of mapping a single PMseq read to the A. fumigatus genome is a Bernoulli process, as suggested by Ebinger et al., meaning that the read either mapped correctly or incorrectly (Van Borm et al., 2021). Therefore, we expected the detection probability of A. fumigatus to follow a binomial mass function with increasing SDSSRN. A binomial distribution function takes into account two parameters: the probability of an event (p; a single read successfully mapped to the genome) and the number of trials (n; the number of SDSSRNs obtained). For a PMseq read, a DNA sequence of 150 bp on average is produced, and 50 bp at one end is used for genome mapping. Hrant et al. suggested that a 50 bp read obtained by shotgun-sequencing gave a 6% probability of mapping to multiple genomes and 0.52% probability of erroneous mapping (Hovhannisyan et al., 2020), while Hajibabeai et al. suggested that a 109 bp mini-barcode DNA sequence could be used to identify a species with 92% accuracy. We estimated the probability, p, that a single read mapped correctly to the A. fumigatus genome (indicating A. fumigatus positivity) was 0.85. Therefore, we defined the detection probability as [1 – (0.15)SDSSRN], where 0.15 is the likelihood that one SDSSRN read was mapped incorrectly. 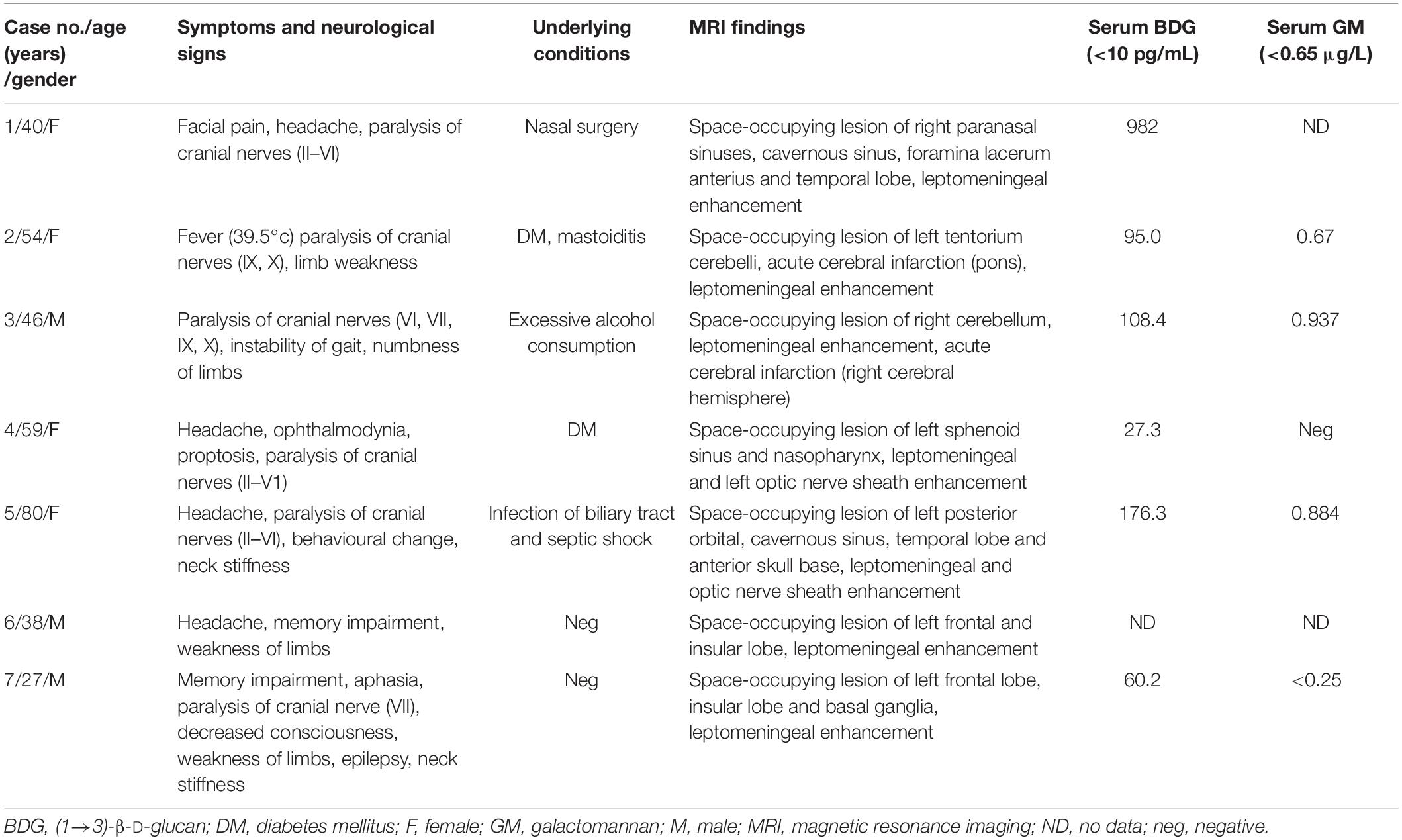 All of the patients with CA (7/7, 100%) underwent cranial magnetic resonance imaging (MRI) and exhibited space-occupying lesions, including in the paranasal sinuses, cavernous sinus, or skull base in five cases (5/7, 71.43%) and frontal lobe and insular lobe in two cases (2/7, 28.57%) (Figure 1). Leptomeningeal enhancement was noted in seven patients (7/7, 100%). Diffusion-weighted imaging (DWI) hyperintensity was found in two patients (2/7, 28.57%), which was considered as CA-related acute cerebral infarction. 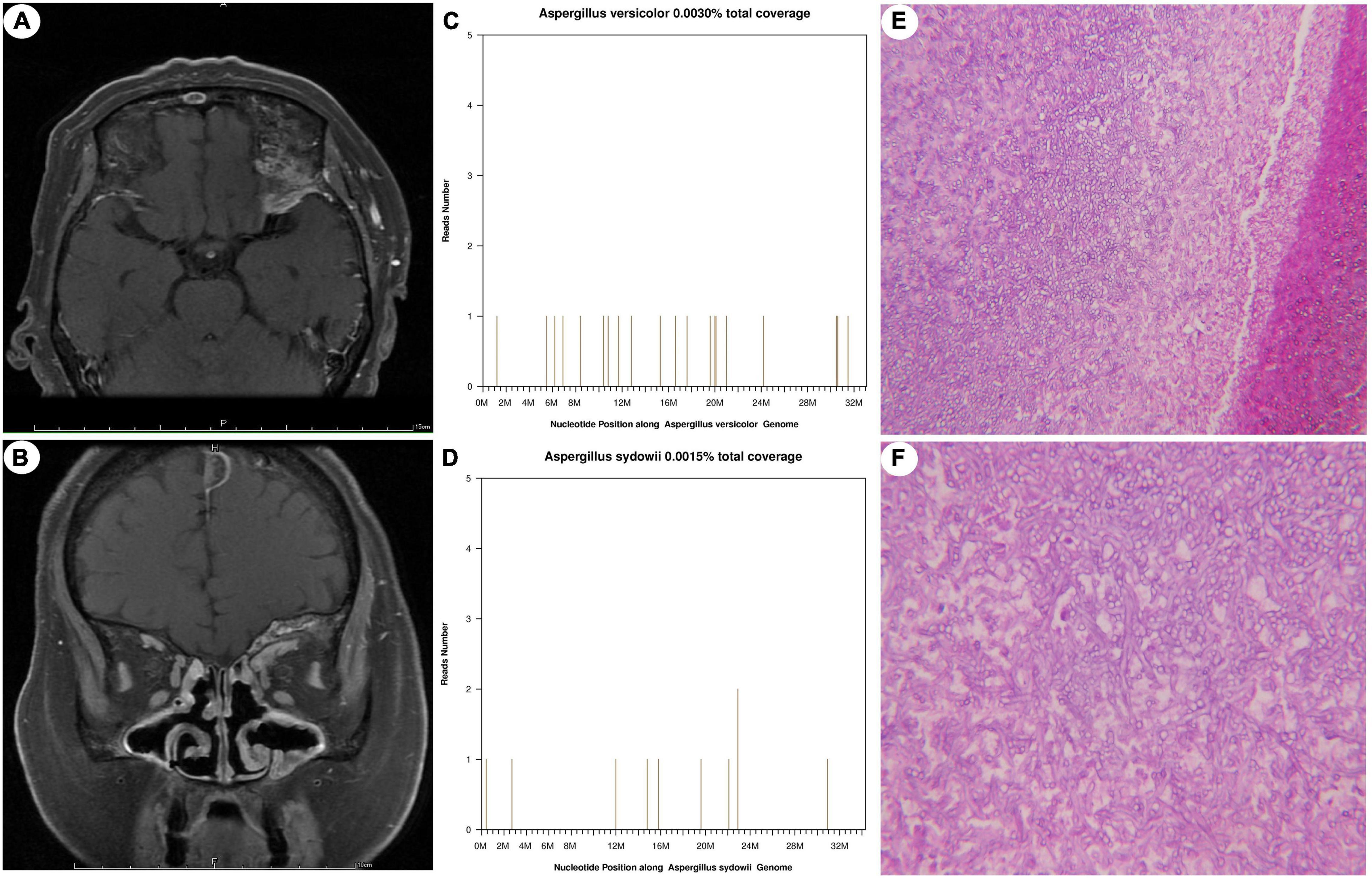 The serum tumour markers of the seven patients with CA were normal. Six patients underwent serum (1→3)-β-D-glucan (BDG) testing, and all were positive (6/6, 100%). Five patients underwent serum galactomannan (GM) testing, and three (3/5, 60%) were positive (Table 1). The CSF laboratory results and histopathological findings of the seven patients are summarised in Table 3. Elevated intracranial pressure (≥200 mmH20) was found in six patients (6/7, 85.71%). The CSF white blood cell count ranged from 0 × 106 to 530 × 106/L (median = 18 × 106/L), the CSF glucose level from 2.4 to 5 mmol/L (median = 3.2 mmol/L), and the CSF protein level from 0.2 to 1.238 g/L (median = 0.878 g/L). All fungal cultures of the CSF were negative (7/7, 100%), and fungal culture of the brain tissue of case 7 was positive for A. fumigatus. Twelve of the 13 cases of CM are described in detail elsewhere (Xing et al., 2019). The seven CA patients underwent craniocerebral biopsy, and the histopathological findings showed granulomatous inflammation or inflammatory cell infiltration and Aspergillus hyphae (Figure 1). Periodic acid–Schiff (PAS) staining of specimens was positive in six patients (6/7, 85.71%). 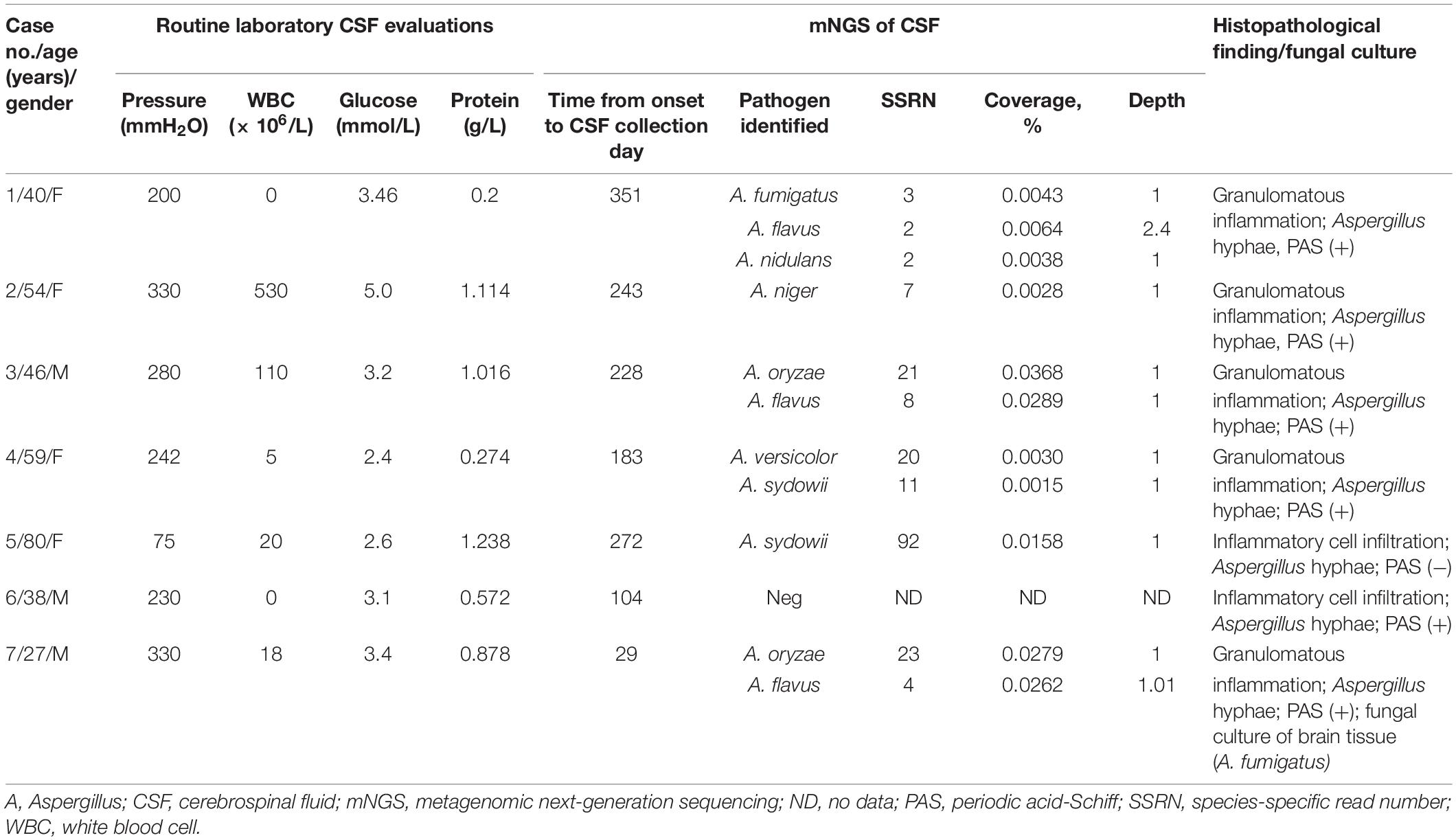 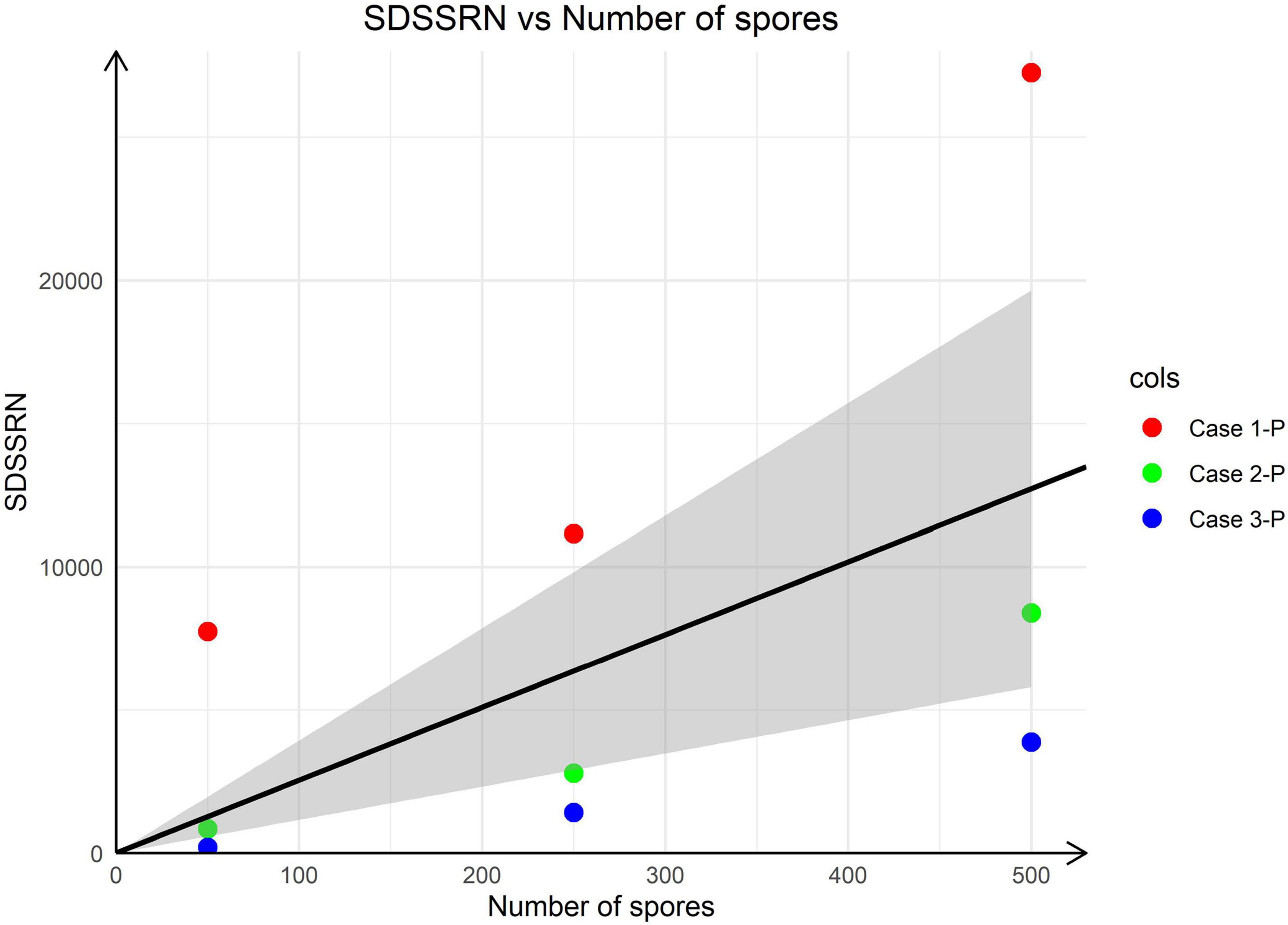 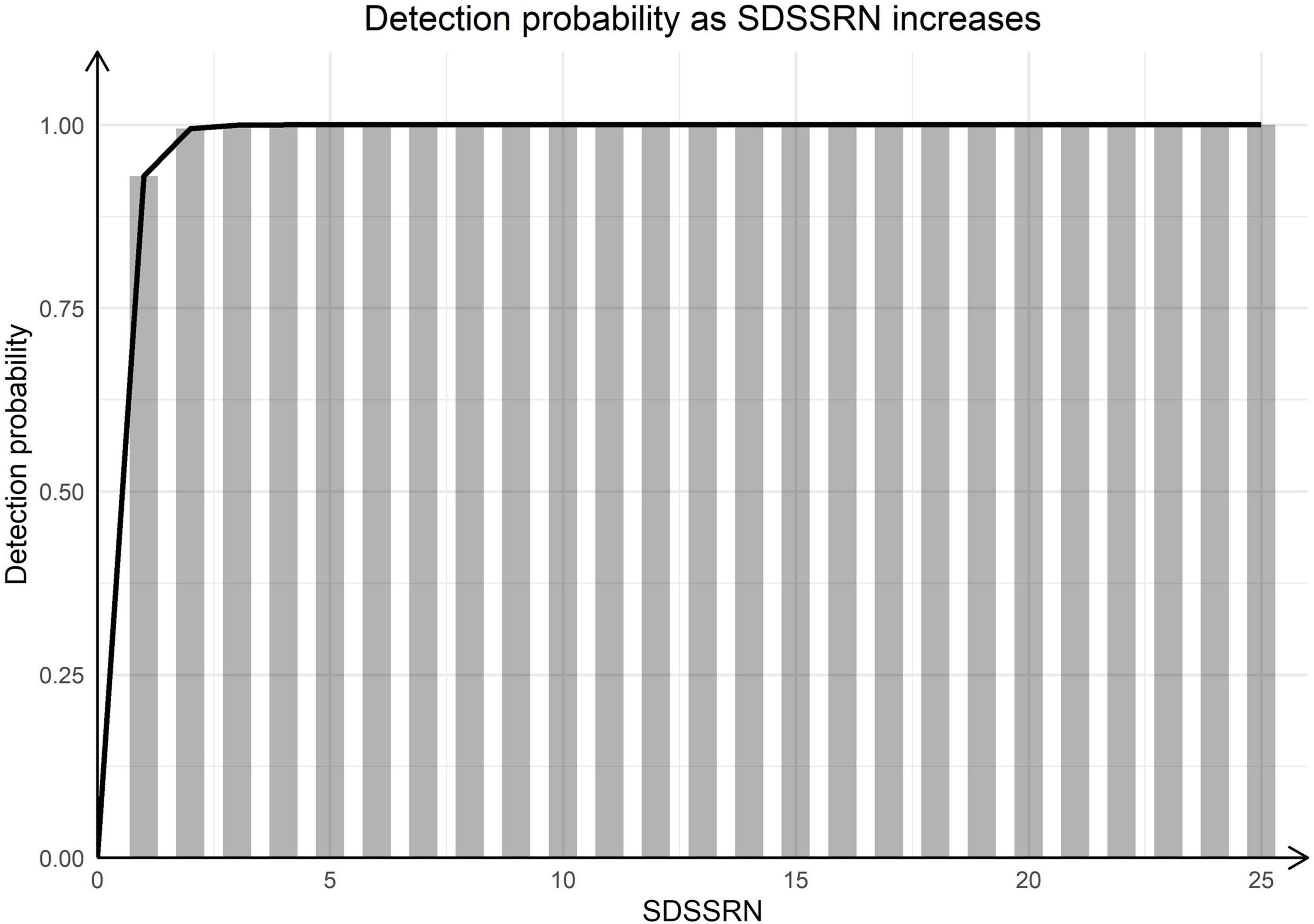 Most studies of CA are case reports or case series (Ruhnke et al., 2007; Ellenbogen et al., 2016). In this prospective study, we enrolled seven consecutive CA patients confirmed by biopsy, and 13 confirmed CM, to evaluate the utility of mNGS for the diagnosis of CA. mNGS of CSF contributed to the diagnosis of CA. CA may be caused by several Aspergillus species. Moreover, although Aspergillus may be present at low abundance, it should not be regarded as background contamination because of the high mortality rate.

The clinical presentation of patients with CA is variable and non-specific (Kourkoumpetis et al., 2012), and MRI findings can be helpful for the clinical diagnosis but are nonspecific (Ruhnke et al., 2007). (1→3)-β-D-glucan (BDG), a polysaccharide fungal cell wall component and not specific for aspergillosis, can be regarded as a panfungal marker (Lass-Flörl, 2019); the positivity rate was 100% in this study. GM, a carbohydrate component of the cell wall of Aspergillus and other fungal species (Ray et al., 2019), is a diagnostic marker for invasive aspergillosis (Patterson et al., 2016); the positivity rate was 60% in this study. Furthermore, GM is not specific to Aspergillus and can be positive in infections by other fungi, including Penicillium marneffei, Fusarium, Alternaria, Histoplasma, and Blastomyces (Barton, 2013).

In view of the non-specificity and low sensitivity of fungal antigen tests, accurate aetiological diagnosis is crucial for the management of CA. Aspergillus is rarely detected in cultures of CSF from suspected fungal intracranial infection (Hummel et al., 2006; Ray et al., 2019). The sensitivity and specificity of CSF Aspergillus PCR were reported as 75 and 98.3%, respectively, in a case series including five confirmed and seven probable CA cases (Imbert et al., 2017). Nevertheless, Aspergillus infection is usually considered only after failure of initial antibiotic treatment for common CNS pathogens (Winterholler et al., 2017). mNGS overcomes these limitations and allows simultaneous and unbiased identification of all microorganisms in human samples (Goldberg et al., 2015).

Our findings show that mNGS enables accurate diagnosis of CA. However, because Aspergillus is widely distributed (Samson et al., 2014) and difficult to distinguish from invasive disease, the question arises as to how can we determine that Aspergillus detected by mNGS is not a background microorganism. Although CSF is considered aseptic, there may be contaminants, e.g., from skin or laboratory reagents (Ramachandran and Wilson, 2020). Therefore, a strict aseptic and nucleic acid-free standard operating procedure and use of appropriate controls are required for CSF collection and laboratory processing. Also, the clinical significance of detection of Aspergillus at low abundance is unclear. Although Aspergillus is an opportunistic pathogen, it should not be regarded as background contamination because of the poor outcome of CA. Also, the clinical context is an important matter.

This study involved a relatively large consecutive series of confirmed CA cases. No probable or possible cases were enrolled, enhancing the robustness of the evidence. However, this study had several limitations. First, relatively few patients were enrolled. Second, all Aspergillus detected were considered positive mNGS results in the present study. However, whether these opportunistic fungal pathogens are intracranial pathogens is debatable. Third, the utility of an SSRN cut-off value of 2 is unclear. The limited sample size and concentrations of Aspergillus spores in the positive controls mean that further study is necessary.

In conclusion, our findings highlight the utility of mNGS of the CSF for non-invasive identification of CA. However, strict aseptic and nucleic acid-free processing and elimination of background contamination are necessary. Pathogen identification should be considered together with the clinical context, such as underlying conditions, symptoms and signs, radiographic evidence, and results of smear, culture, BDG, GM, and other relevant tests.

The studies involving human participants were reviewed and approved by the Ethics Committee of the Chinese PLA General Hospital. Written informed consent to participate in this study was provided by the participants’ legal guardian/next of kin.

We thank all of the patients and their families for participating in the study and Tianjin Medical Laboratory, BGI-Tianjin, Tianjin, China, for performing the mNGS and providing a sequencing data list, especially Jin-Min Ma and Qian-Ru Yao for the advice in data analysis of positive controls.

Copyright © 2021 Xing, Yu, Zhang, Tan, Ma, Tian, Wang, Yao, Cui, Gui and Yu. This is an open-access article distributed under the terms of the Creative Commons Attribution License (CC BY). The use, distribution or reproduction in other forums is permitted, provided the original author(s) and the copyright owner(s) are credited and that the original publication in this journal is cited, in accordance with accepted academic practice. No use, distribution or reproduction is permitted which does not comply with these terms.

Control of Human and Animal Aspergillosis – a Health Approach