Objectives: Pathogenic mutations in developmental and epileptic encephalopathy (DEE) are increasingly being discovered. However, little has been known about effective targeted treatments for this rare disorder. Here, we assessed the efficacy of ketogenic diet (KD) according to the genes responsible for DEE.

Methods: We retrospectively evaluated the data from 333 patients who underwent a targeted next-generation sequencing panel for DEE, 155 of whom had tried KD. Patients showing ≥90% seizure reduction from baseline were considered responders. The KD efficacy was examined at 3, 6, and 12 months after initiation. Patients were divided into those with an identified pathogenic mutation (n = 73) and those without (n = 82). The KD efficacy in patients with each identified pathogenic mutation was compared with that in patients without identified genetic mutations.

Epileptic encephalopathy refers to a group of epileptic disorders that epileptic activities per se cause adverse impacts to the patient's development (1). Developmental and epileptic encephalopathy (DEE) is a recently introduced concept with the advances in genetic diagnosis, as genetic etiologies can cause developmental delay irrespective of epileptic activities (2). The causes of DEE can be various including structural and metabolic etiologies. Moreover, owing to advances in genetic testing technologies, such as next-generation sequencing (NGS), research has revealed that diverse genetic mutations, especially de novo monogenic mutations, constitute a significant portion of the etiologies of DEE (3). The discovery of causative genes for DEE has amplified the efforts to improve our understanding of the pathophysiology of each genetic mutation, with the ultimate objective of precision medicine. For example, ketogenic diet (KD), mechanistic target of rapamycin (mTOR)-inhibitors, and retigabine are effective targeted treatments for glucose transporter type 1 deficiency, mTORopathies, and KCNQ2 encephalopathy, respectively (4–6).

The KD is an effective therapeutic option for various DEE syndromes (7–10), and may be an alternative to pharmacologic therapies. However, the effects of KD vary among patients and implementing KD even as a short-term trial is a great challenge for both patients and caregivers, owing to the restrictive diet regimen and potential side effects (11).

Therefore, identifying those patients who are the most likely to respond to KD would be beneficial for determining with whom and when KD should be initiated. In the present study, we aimed to establish whether the effects of KD differ according to the type of genetic mutation, as confirmed by the targeted NGS gene panel for DEE.

We retrospectively evaluated the data from patients who were diagnosed with DEE at Severance Children's Hospital, Seoul, South Korea. Inclusion criteria were as follows: (1) patients with epilepsy and cognitive and behavioral impairments who were diagnosed with DEE; (2) patients whose seizures or developmental delays were noticed before the age of 3 years; (3) patients who underwent a targeted NGS gene panel for DEE between January 2016 and March 2017; (4) patients who failed to achieve seizure freedom with adequate trials of two or more antiepileptic drugs (AEDs); and (5) patients who started KD therapy between January 2006 and June 2016. Exclusion criteria were as follows: (1) patients with proven etiologies other than genetic etiology, such as structural, infectious, or immune encephalopathies; and (2) patients who underwent KD therapy for cognitive benefits rather than seizure control, owing to difficulties in assessing the efficacy of KD by seizure frequency.

This study was approved by the Institutional Review Board of Severance Hospital (IRB No. 4-2017-0699) and written informed consent was waived.

The variables we evaluated with respect to their possible predictive value for a responder were as follows: age at seizure onset, sex, number of AEDs being taken at the time of KD initiation, lead time from seizure onset to KD initiation, the total duration of KD implementation, epilepsy syndrome, and pathogenic mutation. Regarding the epilepsy syndrome, the syndromes of each patient at the time of KD implementation were selected. To classify the epilepsy syndrome, we used the classifications outlined by the International League Against Epilepsy in their revised terminology and concepts for organization of seizures and epilepsies (1).

Patients were instructed to follow either a classic 4:1 or 3:1 KD or modified Atkins diet by the attending pediatric epileptologists (13). Patients immediately began the diet regimen without an initial fasting period, and calories were restricted to 75% of the recommended daily intake. Screening and follow-up examinations were performed according to the protocol reported by Kang et al. (11), and included measurements of serum β-hydroxybutyrate and urine ketone bodies to assess ketosis and adjust the ratios if required.

Values are expressed as the median with the interquartile range (IQR) or as the number and percentage. Comparisons between two groups were performed using chi-squared tests or Fisher's exact tests for categorical data or using Mann-Whitney U-tests for non-parametric and continuous data. Statistical significance was set at p < 0.05. The Statistical Package for the Social Sciences software (version 23.0; SPSS Inc., Chicago, IL, USA) was used for all analyses. 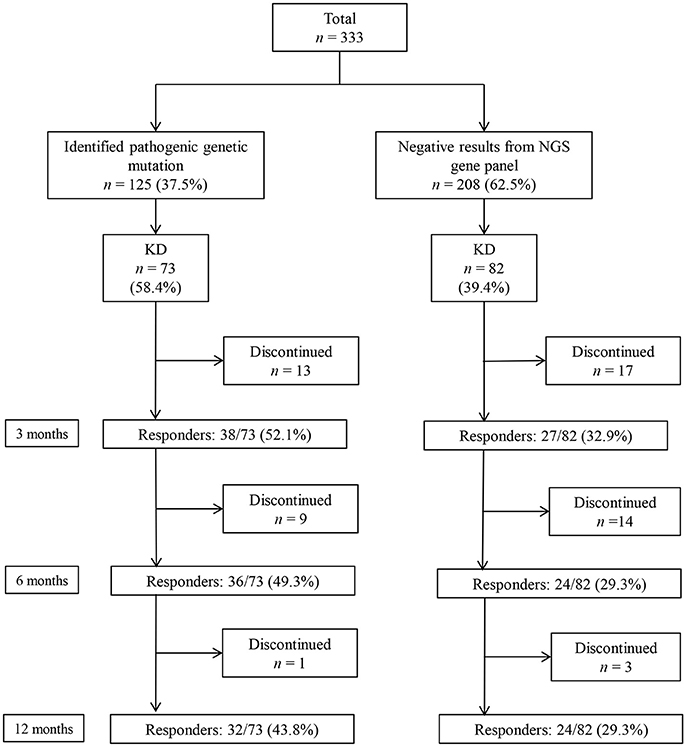 Figure 1. Responses to a ketogenic diet (KD) after 3, 6, and 12 months in patients with and without identified genetic mutations, as determined by a targeted next-generation sequencing (NGS) gene panel for developmental and epileptic encephalopathy. 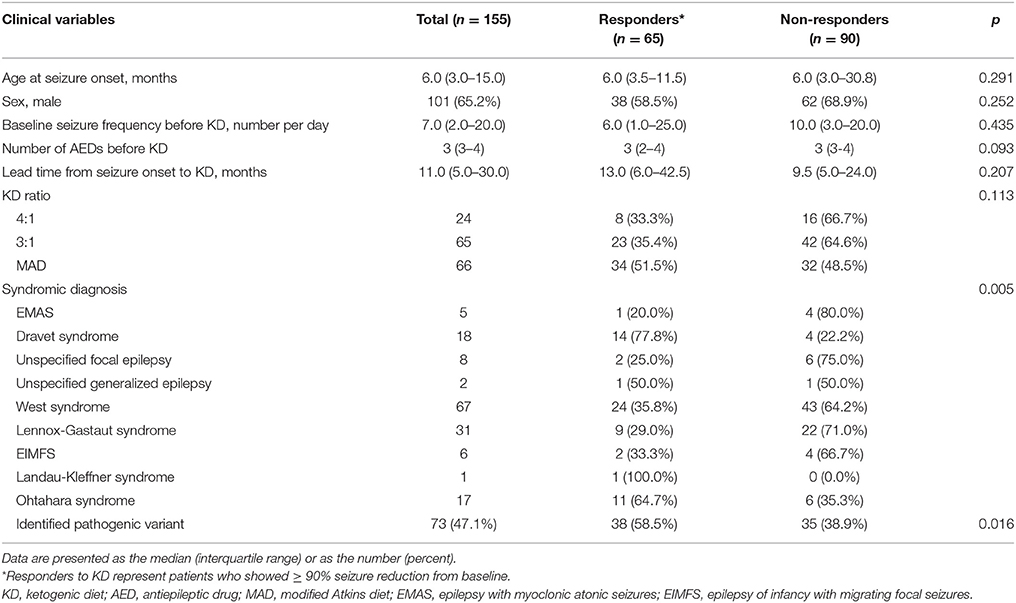 Table 1. Demographics of patients and comparison between responders and non-responders at 3 months after KD Initiation.

Clinical Characteristics of KD Responders vs. Non-responders Among Patients With DEE

Among the 155 patients, 65 (41.9%) patients showed ≥90% seizure reduction from baseline at 3 months after KD initiation and these patients were considered responders. The other 90 (58.1%) patients who showed < 90% seizure reduction were considered non-responders. No statistically significant differences in the clinical variables including the age at seizure onset, sex, baseline seizure frequency, number of AEDs being taken at the time of KD implementation, lead time from seizure onset to KD, and KD ratio, were identified between responders and non-responders (Table 1). However, a significant difference was found between KD responders and non-responders regarding the syndromic diagnosis (p = 0.005), and significantly more patients with identified pathogenic mutations belonged to the responder group than to the non-responder group (p = 0.016), i.e., patients with an identified genetic mutation responded better to KD. 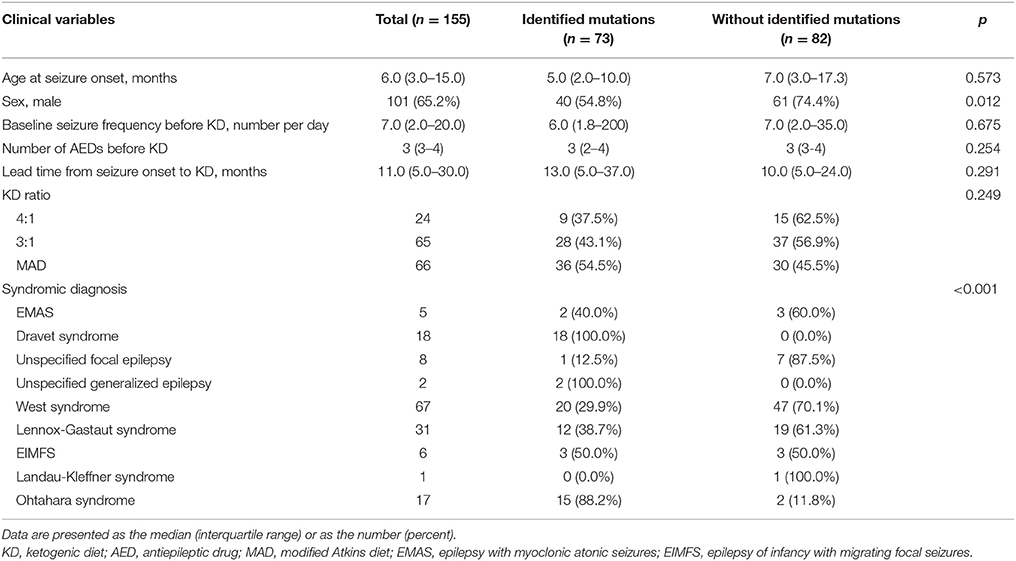 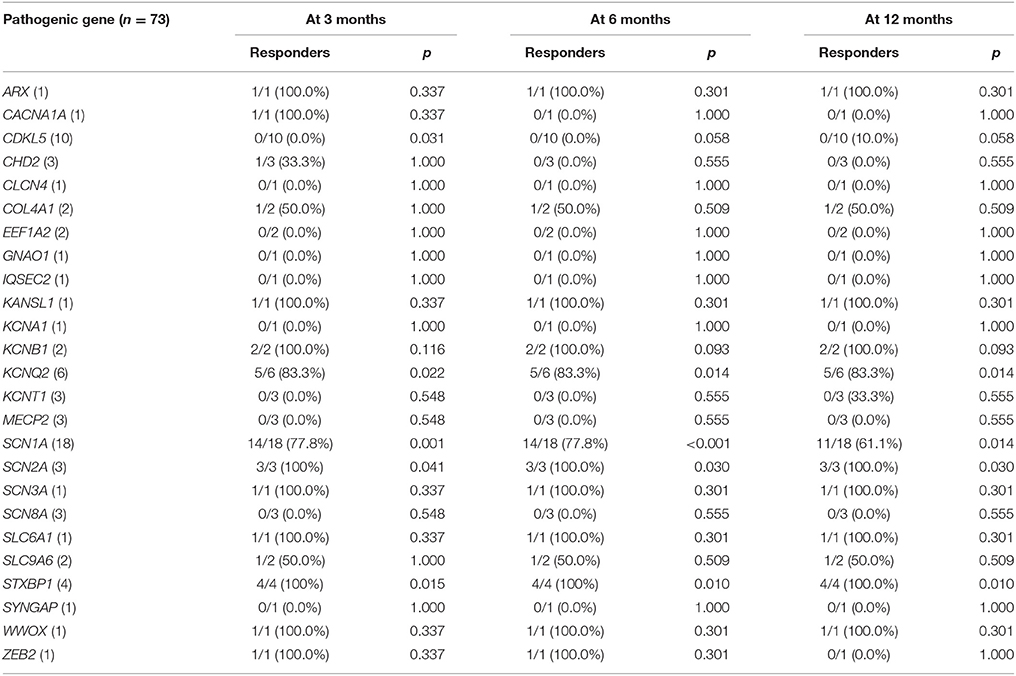 Table 3. Responder rates to ketogenic diet according to the identified pathogenic gene, with the P value for the comparison with the responder rate of patients without identified genetic mutations.

KD Efficacy According to Causative Mutations in Epilepsy Syndromes

The monogenic mutations that are responsible for DEE are increasingly being discovered with the advent of the NGS technique and targeted NGS or gene panel studies have been suggested as the most cost-effective genetic testing method for patients with DEE (14). Of the 333 patients in our study who underwent a DEE gene panel, 125 (37.5%) patients had an identified causative monogenic mutation; this incidence rate is similar to those reported in previous studies (15, 16), and such findings collectively support the usefulness of NGS panels in searching for the genetic causes of DEE. Moreover, our data provide useful insights regarding whom and when to recommend KD therapy for patients with gene-associated DEE.

To date, few reports on the efficacy of KD in patients with DEE with specific genotypes have been published (17–19), and of these, most are anecdotal reports or include short-term evaluations of the efficacy in only one specific genotype. In the present study, we assessed the long-term response to KD (over 12 months) in patients with each genotype of DEE. Additionally, we focused on patients who showed definite improvements after KD by strictly regarding only those patients who showed ≥90% seizure reduction as responders. Therefore, this study is significant because it is the first to assess the long-term efficacy of KD according to the various genetic causes of DEE. Moreover, we revealed the genotypes that are the most likely to show significant seizure reductions after KD.

The KD is reportedly effective for patients with DEE syndromes such as Dravet syndrome, West syndrome, Lennox-Gastaut syndrome, and epilepsy with myoclonic atonic seizures (7–10, 20–22). Efforts to identify phenotypes with clinical variables that can help predict which patients will show a better response to KD have been made (23). Our study showed that children with specific syndromes, especially those with an identified genetic cause, responded better to KD at 3 months than did those with syndromes without identified genetic causes. However, none of the other clinical variables we evaluated were related to a good KD response. In addition to the type of epileptic syndrome, we compared the efficacy of KD between different genotypes in order to reveal which genotypes are the most likely to respond well to KD. Our analysis demonstrated that patients with SCN2A, STXBP1, KCNQ2, and SCN1A mutations had more favorable responses to KD than did those without genetic mutations.

We understand the limitations of using an observational approach in this study and acknowledge that prospective or randomized controlled studies can provide stronger evidence regarding the efficacy of KD in patients with DEE with each pathogenic variant. We also acknowledge the very small sample size of this study, due to rare nature of DEE with identified pathogenic mutations. This study should therefore be regarded as elementary results demonstrating that specific genetic mutations show different response to KD. Due to the retrospective study design, the effects of KD on the developmental outcomes of these children were not evaluated. For patients without identified genetic mutations, some proportion of them is suspected to have a genetic origin owing to unknown pathogenic genes or genes that were not included in our NGS panel. Despite its limitations, the present study provides the first overview of the efficacy of KD in patients with DEE according to genotype and may serve as a basis for administering precision medicine.

This study was supported by faculty research grant of Yonsei University College of Medicine for 2011 (6-2011-0079).

The Supplementary Material for this article can be found online at: https://www.frontiersin.org/articles/10.3389/fneur.2018.00530/full#supplementary-material

Copyright © 2018 Ko, Jung, Kim, Kang, Lee, Lee, Choi and Kim. This is an open-access article distributed under the terms of the Creative Commons Attribution License (CC BY). The use, distribution or reproduction in other forums is permitted, provided the original author(s) and the copyright owner(s) are credited and that the original publication in this journal is cited, in accordance with accepted academic practice. No use, distribution or reproduction is permitted which does not comply with these terms.