Methods: All patients with ischemic stroke admitted to the Stroke Unit at Haukeland University Hospital were prospectively registered in the NORSTROKE database and every patient's medical record was searched for cancer diagnoses.

Cancer can induce hypercoagulability, leading to both venous and arterial thromboembolism (1). The prevalence of active cancer in ischemic stroke patients is around 5% (2). However, this may be an underestimation as autopsy evidence has shown that up to 15% of cancer patients undergo cerebrovascular ischemia, of which up to half remain undiagnosed. Given this finding, it was suggested that cancer patients suffer milder strokes than other patients, which thus remain undiagnosed and untreated (3). If a patient is suffering an acute ischemic stroke, the pillar of stroke treatment is intravenous (IV) thrombolysis (tPA). Guidelines for treating cancer patients with IV-tPA are still unclear (4). As cancer-associated stroke gains more attention, the new American Heart Association/American Stroke Association guidelines state the high hemorrhage risk of IV-tPA treatment in patients with structural gastrointestinal malignancies and cancer patients post-operatively (5). However, due to lack of substantial data, it has been difficult to state general guidelines for IV-tPA use in cancer patients because many of the randomized IV-tPA-trials included too few patients (6) or excluded patients with cancer (7).

Inclusion of patients started in January 2006 and ended in September 2012. All patients with ischemic stroke admitted to the Stroke Unit at Haukeland University Hospital were registered in the NORSTROKE database, a comprehensive research registry, and every patient's medical record was searched for cancer diagnoses. Ischemic stroke was defined in accordance to the Baltimore-Washington Cooperative Young Stroke Study Criteria as neurological deficit lasting more than 24 h or transient ischemic attacks (TIA) where computed tomography (CT) or magnetic resonance imaging (MRI) showed infarctions related to the clinical findings (8). Stroke severity was determined by the National Institutes of Health Stroke Scale (NIHSS) on admission. Stroke etiology was determined by sing the Trial of Org 10172 in Acute Stroke Treatment (TOAST) criteria (9). Active cancer was defined as (1) cancer diagnosis, (2) metastasis of known cancer, (3) recurrent cancer or (4) receiving cancer treatment within 12 months before or after the index stroke. Patients were dichotomized as patients with known active cancer (CS) and no evidence of active cancer (NCS). Adverse events were defined as any unwanted side effect from the IV-tPA, including intracerebral hemorrhage (ICH). 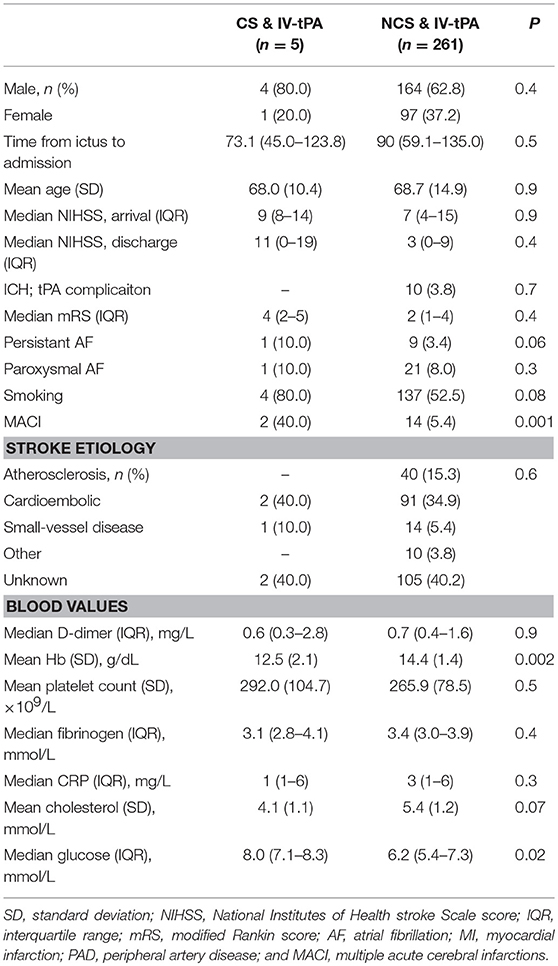 Fifteen CS patients (19.2%) and 277 (21.3%) NCS patients arrived at the hospital within 270 min and were as such eligible for IV-tPA, yet did not receive IV-tPA for varying reasons and contraindications.

Table 2 presents the five CS patients who received IV-tPA in more detail. Three had colon cancer (1 of whom was occult), and the remaining two had malignant melanoma (1 of whom was occult). Two had a stroke etiology of cardioembolism, one small-vessel disease and two undetermined etiology.

Table 2. Characteristics of the five patients with cancer who received IV-tPA.

Only one of the patients was treated with chemotherapy prior to stroke. None of the five IV-tPA-CS patients experienced ICH or any other adverse event from the IV-tPA treatment.

As postulated by Graus et al., we wondered if fewer patients with cancer received IV-tPA due to less focal and milder stroke symptoms (3). On the contrary, and as comparable to other pre-mortem studies, we found that the cancer patients who suffer stroke and cancer experience equally or more severe strokes (10).

It is not inconceivable that some cancer patients do not receive IV-tPA due to the treating physician's uncertainty. This could be due to both the inherent fear of adverse events and hemorrhage, but possibly also the belief that because of significant CS patient co-morbidity, IV-tPA treatment ultimately is futile in bettering the outcome. As such, the willingness to risk tPA-related hemorrhage could diminish further. Cancer is not an established contraindication for IV-tPA, yet, due to lack of empirical evidence of the safety of IV-tPA in cancer patients, physicians have been hesitant to use it. Some cancer patients have coagulation disorders, some have thrombocytopenia, a relative contraindication, or even non-bacterial endocarditis, associated with hemorrhage (11, 12). Although none of the present study's CS patients had thrombocytopenia, this might have been seen if the number of CS patients was higher.

The most important question remains; is it safe to use thrombolysis in patients with active cancer? In our report, we present five patients with active cancer who received IV-tPA, of whom none experienced adverse events. As mentioned, the largest study on this topic with >800 CS patients also concluded that it was safe. However, this study used administrative data and International Classification of Disease codes for their analyses and may have missed significant patient data (9). The most recent paper studying thrombolysis treatment in acute stroke patients with cancer argues that cancer patients more often experience hemorrhagic transformation and poorer outcomes (6, 10). It is not, however, unexpected that patients with comorbid stroke and cancer have increased mortality and poorer outcomes post-stroke (1). As such, it may not be warranted to conclude that IV-tPA is unsafe based on a study of 12 patients, especially as the larger studies suggest that IV-tPA is in fact equally safe in patients with cancer. It is noteworthy that cancer patients form an immensely heterogeneous group, and it may therefore be difficult to create a thrombolysis guideline for the group as a whole. For instance, cases have shown that IV-tPA is unsafe for patients with intraaxial brain tumors, yet safe for those with extraaxial brain tumors (13).

A limitation to this report is the low number of patients included. The small study population thus leaves us with lack of power to compare the findings to other studies. Higher numbers of patients and varying cancer types and data on cancer stage and treatment is needed to create guidelines for treating cancer patients with IV-tPA.

Informed consent, or consent from legal guardian, was obtained from all patients. The study was approved by the Regional Committee for medical and health research ethics (REK Vest).

Copyright © 2018 Selvik, Naess and Kvistad. This is an open-access article distributed under the terms of the Creative Commons Attribution License (CC BY). The use, distribution or reproduction in other forums is permitted, provided the original author(s) and the copyright owner(s) are credited and that the original publication in this journal is cited, in accordance with accepted academic practice. No use, distribution or reproduction is permitted which does not comply with these terms.