Methods: Using a single-center database, we retrospectively identified a consecutive series of patients with symptomatic and asymptomatic cerebral aneurysms treated with coil embolization. We evaluated the following procedure-related factors: procedure time, procedure methods (simple coiling, stent-assisted coiling, and use of multiple microcatheters), and number of coils inserted. The primary outcome was the development of thromboembolism before and after coil embolization confirmed by diffusion-weighted imaging (DWI) irrespective of the location of the procedure. Pearson's chi-square, Student's t-test, multivariable logistic regression analysis, and sensitivity analysis with multinomial logistic regression analysis were used in the statistical analyses.

Results: Of 180 cases enrolled, 146 (81.1%) had evidences of thromboembolism confirmed by DWI, and 13 (7.2%) had neurologic symptoms. Among the documented modifiable procedure-related factors, every 10 min increase in the procedure time was independently associated with the risk of thromboembolism, after adjusting the analysis (adjusted odds ratio 1.11; 95% confidence interval 1.01–1.21). The coiling methods, use of multiple catheters, and number of coils inserted did not change the effect of the procedure time on thromboembolic events (p for interactions > 0.05).

Conclusion: This study showed that the procedure time might be the most effective modifiable factor for reducing thromboembolic events irrespective of the procedure methods used during coil embolization of cerebral aneurysms.

The incidence of periprocedural thromboembolism is reported as 10–69%, and it is the most frequent complication of coil embolization for cerebral aneurysm (1–11). Since periprocedural thromboembolism immediately causes significant neurological deficit and increases the risk of delayed cognitive decline even in immediate asymptomatic lesions, it would be of interest to determine its risk factors and to develop preventative strategies (12, 13).

There is still controversy regarding the procedure-related factors, although the procedure technique itself is considered to have a high possibility of affecting the occurrence of periprocedural thromboembolism. One explanation for this is that prior studies assessed the procedure technique, which was mostly a newly introduced coil device or technique, so it was difficult to evaluate the effects of various risk factors. Second, some of the previous studies considered the effect of the treating physician a risk (1, 3, 5, 14).

This study aimed to investigate which risk factors can be modified to prevent periprocedural thromboembolism in coil embolization for cerebral aneurysm by using a single interventionist's consecutive series of patients.

We prospectively registered all cases with intracranial aneurysms hospitalized between January 2013 and March 2017 in our institution. In this study, we retrospectively collected only cases with intracranial aneurysm who underwent magnetic resonance imaging (MRI) before and within 48 h after coil embolization was performed by an expert interventionist (HC). The following cases were excluded from this study: (1) patients who were uncooperative or unavailable for MRI because of medical conditions or neurological disability; (2) patients who were documented as having an atherosclerotic lesion located proximal to the aneurysm site on the pre-procedure or post-procedure MRI study. This was meant to exclude biologic factors that have a possibility of affecting ischemic lesions during the procedure.

All procedures were performed under general anesthesia using a biplane angiography system (Siemens Medical System, Erlangen, Germany). After a 7-French guiding catheter was placed into the internal carotid or vertebral artery, a microcatheter was introduced into the aneurysmal sac with a microwire (Synchro-14, Boston Scientific Corporation, Natick, MA). The types of endovascular procedures were divided into two groups: simple coiling and stent-assisted coil embolization. Stent-assisted coil embolization was performed by an interventionist as an adjunctive technique in consideration of various patient and aneurysmal factors. For simple coiling, multiple microcatheters were only used for aneurysms with broad necks or incorporated arterial branches. Anticoagulation therapy with intravenous heparin (3,000 units) was administered after guided catheter placement, followed by intermittent hourly heparin injections (1,000 units).

Acute thromboembolisms after coil embolization were defined by the lesions with high signals on diffusion-weighted imaging (DWI) that correlated with low signals on an ADC map. Two experienced vascular neurologists (S-HL and MJ) reviewed all DWI studies and collected formal MRI readings to detect acute thromboembolism. The volume of the thromboembolic lesion confirmed by DWI within 48 h after coil embolization was calculated using Medical Image Processing and Visualization software (version 7.3.0, National Institutes of Health, Bethesda, MD).

From the registry database, we directly obtained patients' demographics (age and sex), vascular risk factors, and medical history (hypertension, diabetes mellitus, hyperlipidemia, and coronary artery disease; current smoking status; history of stroke; and prior use of antithrombotic agents). The aneurysm size, location, and morphology (fusiform and saccular) were noted. Premedication with antiplatelet agents before coil embolization was also noted.

Multivariable logistic regression analysis was used to determine the individual risk of each procedure-related factor for thromboembolism. Variables for adjustment in multivariable models were selected if their p-values were <0.1 in crude comparisons or clinically plausible. Moreover, we evaluated the association between procedure-related factors and the DWI-negative lesion group, coiling-related DWI-positive lesion group, and coiling-unrelated DWI-positive lesion group using sensitivity analysis with multinomial logistic regression analysis.

Table 1. Comparison of baseline characteristics according to the presence of thromboembolism after coil embolization. 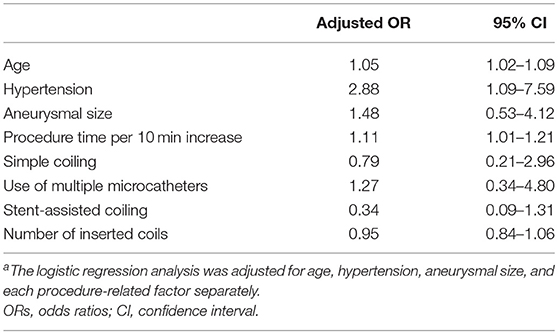 Table 2. Logistic regression analysisa showing ORs of each procedure-related factor for the occurrence of thromboembolism.

Table 3. Interaction analysis showing which procedure-related factors mediated the effect of procedure time on the occurrence of thromboembolism.

Table 4. Comparison of baseline characteristics according to the procedure time in patients treated with coil embolization.

This study aimed to examine which modifiable procedure-related factors could be effective to reduce thromboembolism in coiling embolization of cerebral aneurysm. It has been reported that several procedure-related factors could affect thromboembolic events after coil embolization. However, these factors focused on novel devices and improving the individual technique and workmanship of the interventionist. From the perspective of a clinical neurologist who refers to an interventionist to treat an aneurysm, practicable efforts to determine effective factors that reduce thromboembolic events may be considered more important than improving the individual interventionist's workmanship and technique. Considering above mentioned, this study had main findings as follows; (1) we found that among the modifiable procedure-related factors, reducing the procedure time could be effective for reducing the risk of thromboembolism after coil embolization; (2) we also suggested that practical efforts, such as reducing procedure manipulations and establishing efficient procedure process, should be performed by the interventionist to reduce the procedure time in real-world practice.

Our findings with overall rates of 81.1% for thromboembolism and 7.2% (based on 13/180) for symptomatic events showed that the occurrence of thromboembolism after coil embolization for cerebral aneurysm remained high, but the rate of symptomatic events after coil embolization was reasonable compared to that reported in previous studies (range from 5.4 to 40%) (4, 6, 8). Nonetheless, 32.2% of patients with thromboembolism confirmed by DWI had an unfavorable in-hospital functional outcome, mRS score >1. Among the patients with an unruptured aneurysm, the rates of symptomatic events and unfavorable in-hospital functional outcome were 10.2 and 18.6%, respectively (data not shown). We found no studies that described the aggravating functional status in coil-treated patients who had thromboembolism during hospitalization. The previous studies just emphasized the safety of the coiling procedure since most of the DWI-positive lesions were asymptomatic (1, 18). Although the preprocedural mRS scores were unavailable in our database, the rate of an unfavorable in-hospital functional status after coil embolization in patients with unruptured aneurysm leads to an awakened interest in efforts to reduce thromboembolism after the endovascular procedure.

Our study has several limitations. First, it was a retrospective, observational study with a single-center registry, although we used a prospective database. Second, since an experienced interventionist performed the endovascular procedures, selection bias could affect the results, despite use of a consistent procedural protocol. However, our intentions were to describe the clinical periprocedural situation in the real world and determine the most modifiable factor for reducing a complication of coil embolization, not to evaluate the safety and effectiveness of coil embolization. Hence, in determining the impact of procedure-related factors on outcome, it could be considered a strength of this study that only patients treated by one interventionist were enrolled with consistent coiling protocol. Third, procedure-related factors determined in our study cannot be representative of the general population, and unmeasured confounding factors were not controlled for, although we controlled for known measurable confounders in the multivariable model. Therefore, we should be cautious in generalizing the study results. Lastly, we could not demonstrate the inefficient periprocedural factors that delay the procedure time in detail. Additionally, we did not provide the standard procedure time in this study. The mean procedure time in this study was 110.6 min (± 60.2 min), which was longer than that in a previous study (14). However, our intention in this study was to determine the modifiable factor for reducing thromboembolism after coil embolization, not to define the standard procedure time. Although we did not determine the “gold standard procedure time” for reducing thromboembolisms, our study findings may increase interventionists' interest in improving the procedural process.

Because of study subject anonymity and minimal risk to the patients, collection of data without informed consent was approved by the local institutional review board of Chuncheon Sacred Heart Hospital before the study commenced.

This study was partly supported by a grant from Samjin Pharmaceuticals. Additionally, this study was supported by the Biogreen 21 Program (PJ 01121401) and Hallym University Research (HURF-2016-47). The funding organizations did not participate in the design, conduct, or analysis of the study or in the preparation of the manuscript.

The Supplementary Material for this article can be found online at: https://www.frontiersin.org/articles/10.3389/fneur.2018.01125/full#supplementary-material

Copyright © 2018 Lee, Jang, Kang, Kim, Kim, Sohn, Yang, Jeon, Cho and Choi. This is an open-access article distributed under the terms of the Creative Commons Attribution License (CC BY). The use, distribution or reproduction in other forums is permitted, provided the original author(s) and the copyright owner(s) are credited and that the original publication in this journal is cited, in accordance with accepted academic practice. No use, distribution or reproduction is permitted which does not comply with these terms.