Results: The analysis examined data of 5,667 patients. Overall, 1,403 (25%) patients received levetiracetam; 4,264 (75%) received fosphenytoin. One-to-one propensity score matching created 1,363 matched pairs. No significant difference was found in in-hospital mortality (5.2 vs. 5.1%; odds ratio, 1.03; 95% confidence interval, 0.73–1.46). The proportion of vasopressor use on the day of admission was significantly lower for the levetiracetam group than for the fosphenytoin group (3.2 vs. 4.9%; odds ratio, 0.63; 95% confidence interval, 0.43–0.92). No significant difference was found in other secondary outcomes including total hospitalization cost.

Conclusion: Levetiracetam was related to significantly reduced vasopressor use on the day of admission than that found for fosphenytoin, in adult status epilepticus.

Status epilepticus (SE) is a major medical emergency condition, and failure to treat SE would cause death or irreversible cerebral damage (1, 2). Benzodiazepines are used as first-line treatment for SE (3, 4). Second-line treatments of longer-acting antiepileptic drugs (AEDs) are administered to prevent recurrence (5).

The choice of AEDs for second-line treatment remains controversial. Phenytoin and fosphenytoin have been used as second-line treatment (6). Levetiracetam, a new AED, binds to the synaptic vesicle protein 2A and regulates the release of neurotransmitters. Earlier observational studies show that levetiracetam is similarly effective and that it is associated with less adverse effects than those of phenytoin (7–11). Similar findings have been reported from small randomized control studies (12–14). Neurocritical Care Society guidelines recommended levetiracetam use in addition to phenytoin/fosphenytoin (5), but other guidelines do not recommend levetiracetam use (15, 16).

Therefore, the present study uses a nationwide inpatient database in Japan to compare the safety of intravenous levetiracetam and intravenous fosphenytoin as a second-line treatment in patients with SE. Furthermore, we evaluate the efficacy by comparing the use of third-line AEDs as surrogate outcomes of seizure cessation.

The study was designed as an observational study using routinely collected data. We used the Japanese Diagnosis Procedure Combination inpatient database, which includes discharge abstracts and administrative claims data from more than 1,200 acute-care hospitals. It covers ~90% of all tertiary-care emergency hospitals in Japan. The database includes the following data: age; sex; smoking history; body weight; body height; level of consciousness at admission; diagnoses (main diagnosis, comorbidities present at admission, and conditions arising after admission) recorded according to the International Classification of Diseases Tenth Revision (ICD-10) codes and written in Japanese text; procedures; prescriptions; drug administration; and discharge status. Because the diagnostic records are linked to a payment system, attending physicians must report objective evidence for their diagnoses for purposes of treatment cost reimbursement (18). An earlier study of records of diagnoses and procedures in the database established their validity (19). The specificity of diagnoses exceeded 96%, whereas the sensitivity was 50–80%. The specificity and sensitivity of procedures each exceeded 90% (19). 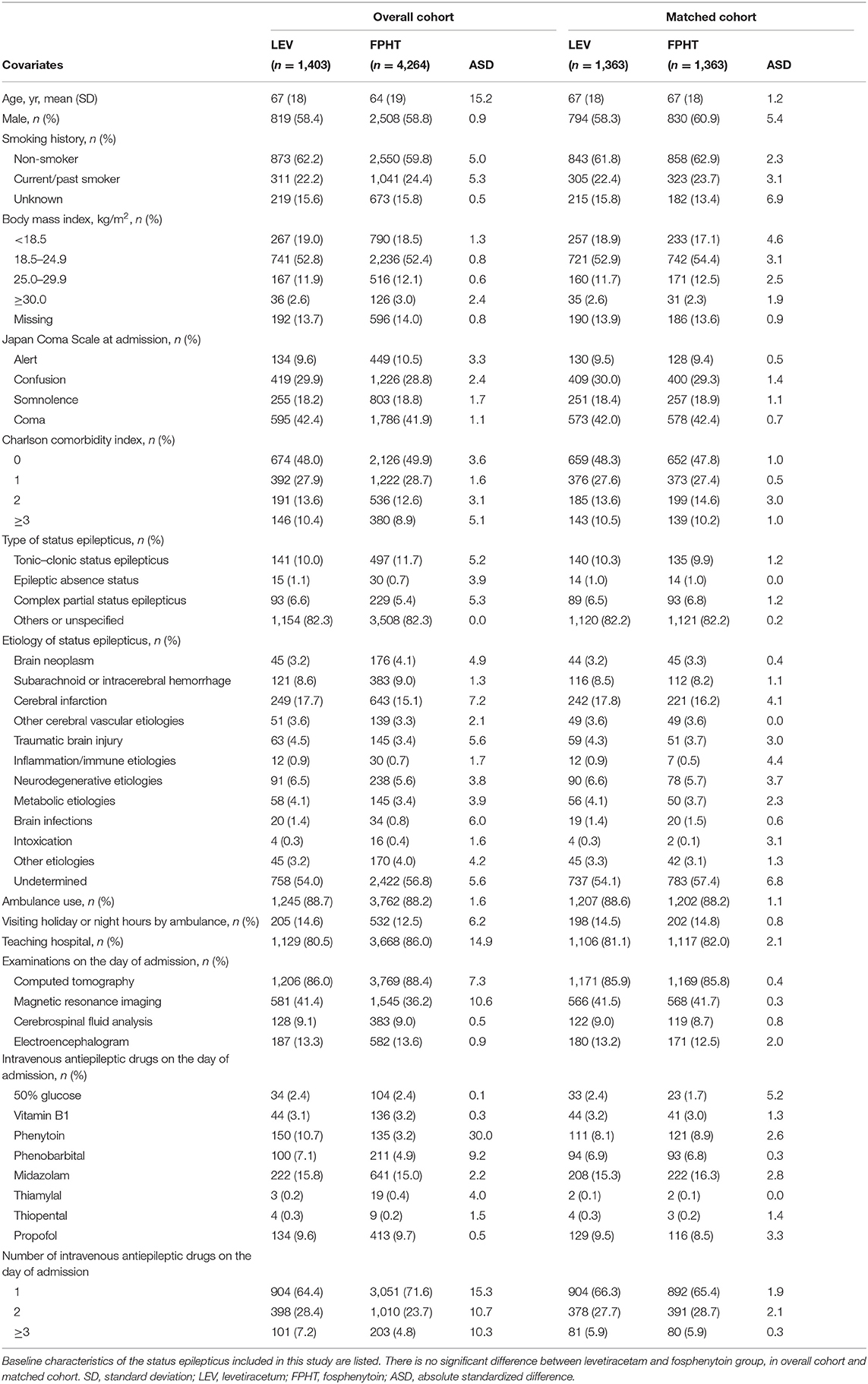 Table 1. Baseline characteristics before and after propensity score matching.

We used a generalized estimating equation approach for comparisons of the primary and secondary outcomes, accompanied by cluster-robust standard errors with hospitals used as the cluster variable (28). Odds ratios and their 95% confidence intervals were calculated for binary outcomes and β coefficients. Their 95% confidence intervals were calculated for the continuous outcomes. These estimates were obtained using generalized estimating equation regression models with logit link function for odds ratios and identity link function for β coefficients.

We conducted two sensitivity analyses. First, to confirm the robustness of the main result by application of a different model, we performed a propensity score adjustment analysis. For this sensitivity analysis, we performed a multivariable regression model with generalized estimation equations accompanied by cluster-robust standard errors with hospitals used as the cluster variable in the overall cohort. Each primary and secondary outcome was defined as the dependent variable and the intravenous levetiracetam on the day of admission. The estimated propensity scores from the main analyses were used for covariates. Second, to compare the effects of seizure cessation rates of the levetiracetam and fosphenytoin groups, the use of third-line treatments of AEDs on the day of admission were compared as surrogate outcomes for the seizure cessation rate between the two groups. We defined midazolam, thiamylal, thiopental, and propofol as third-line treatments according to Japanese epilepsy guidelines (29). For this sensitivity analysis, we calculated the propensity scores of receiving levetiracetam on the day of admission, using the covariates presented in Table 1 except third-line treatments of AEDs and the number of intravenous AEDs on the day of admission. Then, we applied propensity score matching analysis again using these propensity scores and compared the use of third-line treatments of AEDs between two groups using a generalized estimating equation approach.

Categorical variables were described as a number and percentage. Continuous variables were presented as the mean and standard deviation. All reported p-value were two-sided; values for which p <0.05 were inferred as significant. All analyses were conducted using software (STATA/MP 15.0; Stata Corp. College Station, TX, USA). 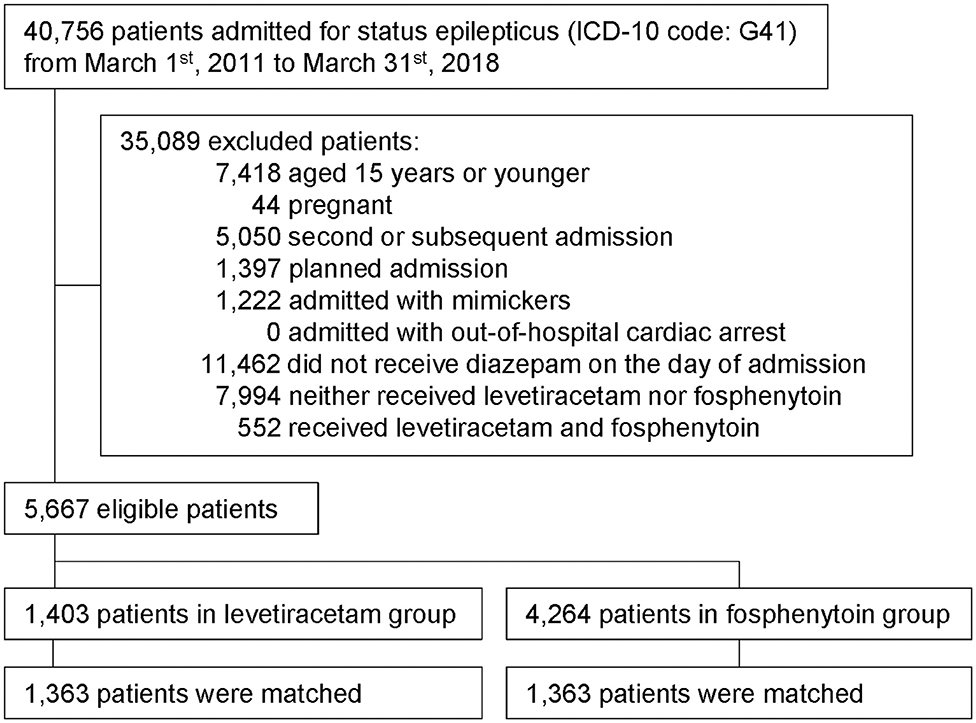 Figure 1. Study outline. Patient flowchart is shown. Forty thousand seven hundred and fifty-six patients with status epilepticus were extracted within the study period. After 35,089 exclusion, 5,667 eligible patients were included into this study. Then, we performed propensity score matching for levetiracetam and fosphenytoin group, and finally 1,363 patients in each group is analyzed.

Results of sensitivity analyses for propensity score adjustment analysis were consistent with results obtained from the main analysis (Table 3).

This nationwide observational study compared the effects of intravenous levetiracetam and intravenous fosphenytoin as second-line treatment in patients with SE. After adjustment for covariates, in-hospital mortality was found to be similar in both groups, but vasopressor use on the day of admission was significantly lower in the levetiracetam group than in the fosphenytoin group. Furthermore, results obtained from the use of third-line treatments of AED, as surrogate outcome of seizure cessation, were not different between the levetiracetam and fosphenytoin group in sensitivity analyses.

In terms of the adverse events, our results suggest that levetiracetam is superior to fosphenytoin in vasopressor use on the day of admission. Earlier studies showed that severe adverse events such as cardiac arrest or hypotension occurred in the phenytoin group, but not in the levetiracetam group (12–14). However, because the sample size was insufficient to detect such a small difference in the adverse events, no significant difference was found in adverse effects in earlier studies. One major strength of the current study is the larger sample size than those of earlier studies. Using the nationwide population, this study first showed the significant difference of adverse events between levetiracetam and fosphenytoin. The circulation failure in SE was crucially important not only for life-saving but also for protecting the brain from neuronal injury (31). Because subsequent cognitive dysfunctions would often be associated with SE (32, 33), maintaining circulation in patients with SE is exceedingly important. Therefore, AEDs that can induce circulatory failure with even slight frequency should be avoided.

Phenytoin, as a sodium channel blocker, potentially entails cardiovascular adverse effects including arrhythmia and hypotension (34, 35). Fosphenytoin is the pro-drug of phenytoin; its side effects were designed to be reduced. Nevertheless, fosphenytoin has side effects of blood pressure reduction and arrhythmia (17). Moreover, anticonvulsant hypersensitivity syndrome, which presents fever, rash, and liver injury, is associated primarily with phenytoin/fosphenytoin administration (36). The main mechanism of levetiracetam is regarded as binding to the synaptic vesicle protein 2A and regulating the release of neurotransmitters, although not all mechanisms have been clarified (7, 37). Levetiracetam has no direct effect on the naive gamma amino butyric acid synapses or sodium channel. Therefore, levetiracetam is regarded as having weaker systemic side effects than other AEDs (37, 38). The plasma half-life is 6–8 h, with <10% protein binding. The metabolic pathway is an enzymatic hydrolysis of the acetamide group, which has less drug interaction. The metabolites have no pharmacological activity. They are excreted renally without hepatic metabolism (39). These pathophysiological and pharmacokinetic mechanisms can support our results by virtue of reduced side effects in the levetiracetam group compared to those of the fosphenytoin group.

This study has some limitations. First, the diagnosis of SE based on diagnostic codes has not been well-validated in the Japanese Diagnosis Procedure Combination inpatient database. However, an earlier validation study conducted using another database showed excellent specificity from the combination of ICD-10 code and the use of AEDs (40). Second, the ICD-10 codes for the type of SE were under-recorded. Most of the patients were classified as others or as unspecified. Because most of the included patients were admitted by ambulance in this study and because such patients would be tonic-clonic SE in Japan (8), the mos others or unspecified might be patients with tonic-clonic SE. Third, the observational characteristics of the study design leave it open to potential bias and confounding. We attempted to control this confounding using propensity score analyses, but we were unable to control for possible unmeasured variables. Fourth, the mean levetiracetam dosage used for this study was lower than those recommended in the guidelines (5) or those in previous randomized control trials (41, 42). The lower levetiracetam dosage in our study might be attributable to the fact that the maximum dose of levetiracetam is 3,000 mg/day in Japanese national health insurance coverage. The lower dose of levetiracetam might be associated with reduced vasopressor use in exchange for unsuccess of seizure cessation. However, results of our sensitivity analyses showed no significant difference in the use of third-line treatments of AED as a surrogate outcome for the seizure cessation rate. Finally, the seizure cessation rate and the time from drug administration to the seizure cessation should be evaluated primarily as the efficacy of SE. Nevertheless, this point could not be analyzed in this study.

Results of this large nationwide observational study demonstrated that the intravenous levetiracetam is associated with reduced vasopressor use on the day of admission compared with intravenous fosphenytoin for the second line treatment after diazepam of adult patients with SE.

The studies involving human participants were reviewed and approved by the Institutional Review Board of The University of Tokyo. Written informed consent from the participants' legal guardian/next of kin was not required to participate in this study in accordance with the national legislation and the institutional requirements.

This work was supported by grants from the Ministry of Health, Labour and Welfare, Japan (19AA2007 and H30-Policy-Designated-004) and the Ministry of Education, Culture, Sports, Science and Technology, Japan (17H04141). The funding source had no role in the study design, data collection, data analysis, data interpretation, or writing of the report. The corresponding author had full access to all the study data and had final responsibility for the decision to submit the manuscript for publication.

The Supplementary Material for this article can be found online at: https://www.frontiersin.org/articles/10.3389/fneur.2020.00615/full#supplementary-material

Copyright © 2020 Nakamura, Ohbe, Matsui, Takahashi, Marushima, Inoue, Fushimi and Yasunaga. This is an open-access article distributed under the terms of the Creative Commons Attribution License (CC BY). The use, distribution or reproduction in other forums is permitted, provided the original author(s) and the copyright owner(s) are credited and that the original publication in this journal is cited, in accordance with accepted academic practice. No use, distribution or reproduction is permitted which does not comply with these terms.