Background and Purpose: Though peripheral artery disease (PAD) is a well-known risk factor for ischemic events, better outcomes have been described in acute ischemic stroke patients with co-existing PAD. This paradoxical association has been attributed to remote ischemic preconditioning (RIPC) and might be related to better collateral blood flow. The aim of this study is to compare outcomes after endovascular thrombectomy (EVT) in acute stroke patients with and without PAD and to assess the relation between PAD and collateral grades.

Conclusion: In the absence of an association between the presence of PAD and collateral scores or outcomes after EVT, it may be questioned whether PAD leads to RIPC in patients with acute ischemic stroke due to large vessel occlusion.

Patients with previous transient ischemic attacks seem to have smaller infarct sizes and better outcomes after subsequent cerebral infarction than patients without (1, 2). This phenomenon, in which brief periods of hypoperfusion offer protection in case of subsequent prolonged ischemia, is called ischemic preconditioning. The underlying etiology is not fully understood but seems to rely on systemic immunoreactivity and metabolic changes (3).

Animal studies have suggested that a similar neuroprotective effect occurs when hypoperfusion is induced in an organ other than the brain; so-called remote ischemic preconditioning (RIPC) (4, 5). In clinical setting, a randomized controlled trial in patients with ischemic stroke treated with intravenous thrombolysis demonstrated that RIPC induced by intermittently inflating a tourniquet on one of the limbs led to smaller perfusion deficits or DWI lesions (6). However, this trial did not show effect on clinical outcome at 3 months.

Peripheral artery disease (PAD) can be regarded as a chronic remote preconditioning process. So far there are conflicting results in studies with acute stroke patients on the relation between PAD and outcome. A small retrospective case-control study found that patients with ischemic stroke who had PAD had smaller infarct volumes, better functional outcomes, and a reduced risk of death (7). On the contrary, worse outcomes have been reported in stroke patients with low ankle-brachial index (ABI), which is a measure for PAD (8).

In a mouse model of ischemic stroke, RIPC led to better cerebral blood flow and the prevention of collateral artery collapse (9, 10). Whether pre-existent PAD affects the extensiveness of collaterals in humans is unknown. Since multiple studies have shown that higher collateral grades are associated with better functional outcome after endovascular treatment (EVT) in acute ischemic stroke, PAD may have a positive effect on outcome through better collateral blood flow (11–13).

The MR CLEAN Registry is a prospective, nationwide registry, in which data are collected from consecutive acute stroke patients treated with EVT in the Netherlands. The study protocol has been evaluated by the medical ethics committee of the Erasmus MC in Rotterdam, and permission to carry out the study as a registry was granted. Full methods of the MR CLEAN Registry have been reported previously (14). EVT consisted of mechanical thrombectomy, thrombus aspiration, or a combination of both. The method of EVT for each patient was left to the discretion of the treating physicians. For the present study, we used data of patients who underwent EVT from March 2014 up to November 2017 meeting the following inclusion criteria: groin puncture within 6.5 hours after symptom onset; age > 18; occlusion of intracranial carotid (ICA, ICA-T), middle (M1/M2), or anterior (A1/A2) cerebral artery, demonstrated by baseline CT angiography (CTA). Patients with missing information on PAD were excluded from assessment.

Source data will not be made available because of legislator issues on patient privacy, but detailed analytic methods and study materials, including log files of statistical analyses, will be made available to other researchers on reasonable request to the first author.

All imaging was assessed by an imaging core laboratory, whose members were blinded to clinical findings, except for side of symptoms. Collateral status was graded on baseline CTA using a 4-point scale, with 0 for absent collaterals (0% filling of the occluded vascular territory), 1 for poor collaterals (>0% and ≤ 50% filling), 2 for moderate (>50% and <100% filling), and 3 for good collaterals (100% filling) (15). Reperfusion was scored on digital subtraction angiography (DSA) by the extended Thrombolysis in Cerebral Ischemia (eTICI) score (16), which ranges from grade 0 (no reperfusion) to grade 3 (complete reperfusion). Successful reperfusion was defined as eTICI 2B or higher. Patients of whom bi-directional view on final DSA was not available (missing lateral or anterior view), were excluded from further analysis.

The primary outcome measure was the modified Rankin Score (mRS) at 90 days, which is a 7-point scale ranging from 0 (no symptoms) to 6 (death) (17). A score of 2 points or less indicates functional independence. Secondary outcomes included functional independence, neurological deficit measured by the National Institute of Health Stroke Scale (NIHSS) at 24–48 h (18), and collateral grades. Safety outcomes included mortality at 90 days, symptomatic intracranial hemorrhage (sICH), and stroke progression. Intracranial hemorrhage was considered symptomatic if the patient had died or had deteriorated neurologically (a decline of at least four points on the NIHSS), and the hemorrhage was related to the clinical deterioration (according to Heidelberg criteria) (19).

All descriptive analyses include patients with complete data, while all regression models include all patients with imputed data. STATA (version 14.1) was used for all statistical analyses.

Of the 3,180 patients in the MR CLEAN registry meeting all other inclusion criteria, 47 were excluded because of unrecorded information on PAD and 368 because of missing bi-directional view on final DSA, leaving 2,765 patients for the present post-hoc analysis. Of these, 254 (9.2%) had PAD (Figure 1). 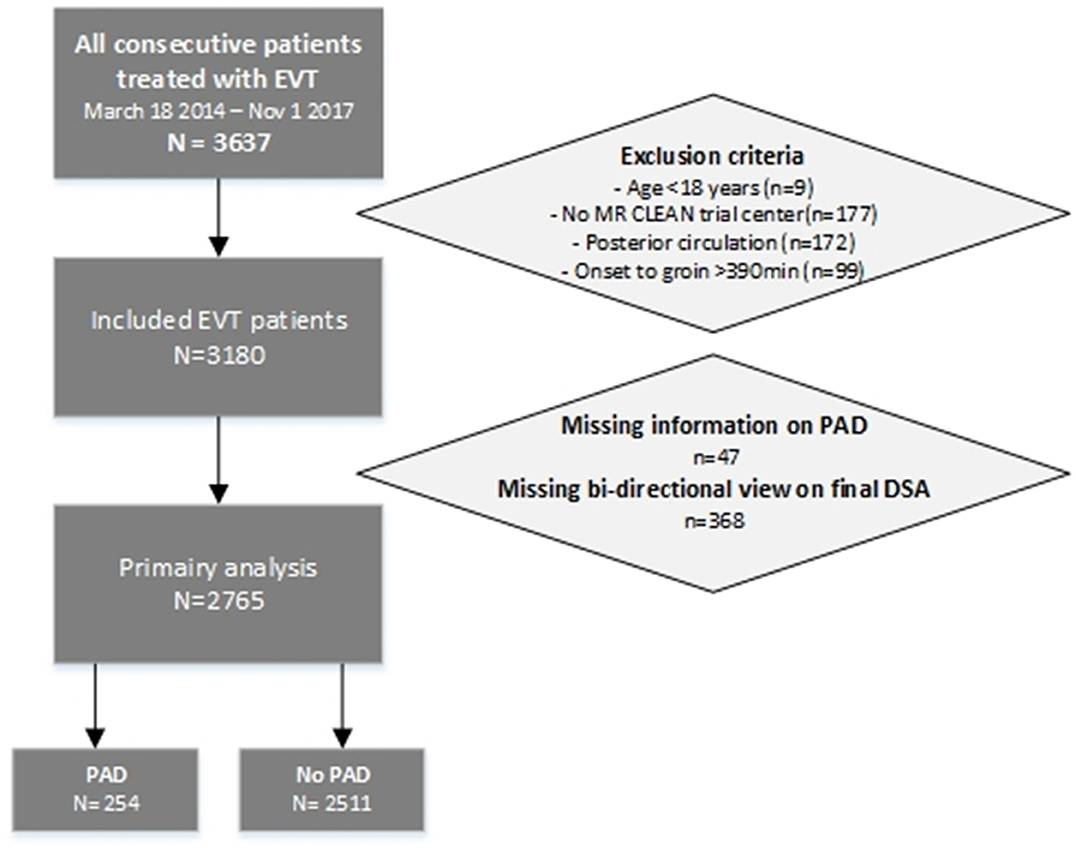 Patients with PAD were older (median age 75 vs. 72, p < 0.02), and less often received intravenous thrombolysis (72 vs. 77%, p = 0.05) than patients without PAD (Table 1). Hypertension, myocardial infarction, hypercholesterolemia, diabetes mellitus, previous ischemic stroke, and smoking were more frequent in patients with PAD. The extent of early ischemic lesions at baseline was significantly different between groups, in favor of patients with PAD (median ASPECTS 9 (IQR 8–10) vs. 9 (IQR 7–10), p = 0.03). Patients with PAD were more likely to have intracranial atherosclerosis (76 vs. 59%, p < 0.01), and >50% atherosclerotic stenosis of the symptomatic carotid artery compared to patients without PAD (16 vs. 8%, p < 0.01). Successful reperfusion did not differ between groups (eTICI 2B-3 68 vs. 70%, p = 0.60). 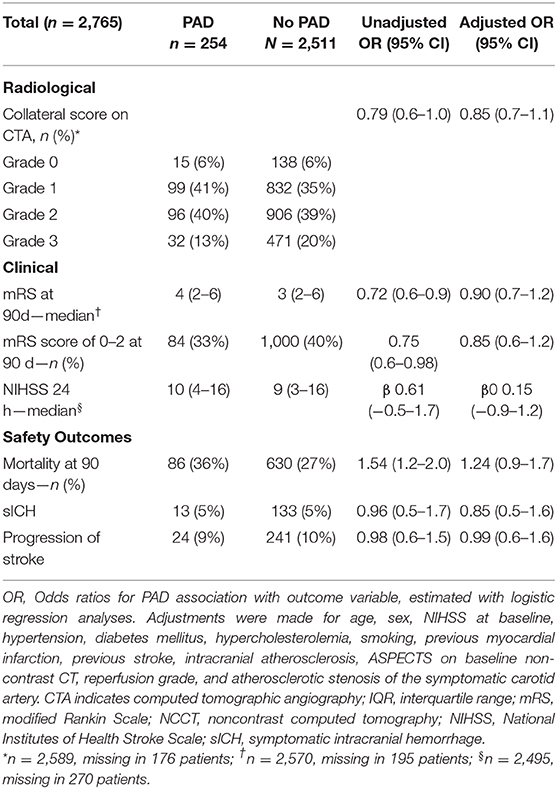 We found no association between PAD and functional outcome after ischemic stroke, in contrast to a previous case-control study (7). In that study acute stroke patients with PAD had a very low NIHSS at presentation (47% NIHSS 1–4). Our study concerns a distinct patient population with proven large vessel occlusions causing more severe strokes resulting in a rather high NIHSS and possibly less dispersion in post-stroke mRS. The influence of PAD may therefore be diminished in patients treated with EVT due to stroke severity. Another explanation might be that physicians treat less aggressively in case of persistent neurologic deficit after EVT and concomitant severe co-morbidity including PAD. With this self-fulfilling prophecy, a possible positive effect of PAD on outcome may therefore not have been investigated properly. A previous study found worse outcome after stroke in patients with low ankle-brachial index (ABI) (8). Our study did not measure ABI to determine severity of PAD. It is possible to have missed an association between severe PAD and outcome if the patients in our cohort would have had mainly moderate-to-high ABI.

The strength of our study is the large patient sample. All outcome measures have been collected prospectively according to protocol and independent of our present research question.

Nevertheless, there are limitations. First, there was no standardized assessment for peripheral artery disease which may have led to different judgment between centers or between physicians. Also, we were not able to assess the ABI in our patients. Since ABI is more reliable in identifying PAD than determination based on clinical judgment, we might have over- or underdiagnosed PAD in our cohort of ischemic stroke patients. However, previous research on PAD in stroke patients showed a comparable prevalence of around 10% (8, 23).

A second limitation concerns the presence of intracerebral atherosclerosis in our patients. Peripheral artery disease can be isolated in the lower limbs, but might also occur concurrently in the coronary arteries or cerebral arteries (24, 25). The extent of cerebral vessel atherosclerosis is associated with white-matter loss and lacunar infarctions and may therefore influence functional outcome. Although we adjusted our analysis for the presence of intracranial atherosclerosis, our model could not be corrected for the extent or specific location of this condition.

Source data will not be made available because of legislator issues on patient privacy, but detailed analytic methods and study materials, including log files of statistical analyses, will be made available to other researchers on reasonable request to the first author. Requests to access the datasets should be directed to fav.pirson@mumc.nl.

The studies involving human participants were reviewed and approved by medical ethics committee of the Erasmus MC in Rotterdam. Written informed consent for participation was not required for this study in accordance with the national legislation and the institutional requirements.

The Supplementary Material for this article can be found online at: https://www.frontiersin.org/articles/10.3389/fneur.2020.560300/full#supplementary-material

Copyright © 2020 Pirson, Hinsenveld, Staals, de Ridder, van Zwam, Schreuder, Roos, Majoie, van der Worp, Uyttenboogaart, Lycklama à Nijeholt, Schonewille and van Oostenbrugge. This is an open-access article distributed under the terms of the Creative Commons Attribution License (CC BY). The use, distribution or reproduction in other forums is permitted, provided the original author(s) and the copyright owner(s) are credited and that the original publication in this journal is cited, in accordance with accepted academic practice. No use, distribution or reproduction is permitted which does not comply with these terms.