Vestibular Preservation After Cochlear Implantation Using the Round Window Approach

Background: The development of less traumatic surgical techniques, such as the round window approach (RWA), as well as the use of flexible electrodes and post-operative steroid administration have enabled the preservation of residual hearing after cochlear implantation (CI) surgery. However, consideration must still be given to the complications that can accompany CI. One such potential complication is the impairment of vestibular function with resulting vertigo symptoms. The aim of our current study was to examine the changes in vestibular function after implantation in patients who received CI using less traumatic surgery, particularly the RWA technique.

Methods: Sixty-six patients who received CI in our center were examined by caloric testing, cervical vestibular evoked myogenic potential (cVEMP) and ocular VEMP (oVEMP) before or after implantation, or both, to obtain data on semicircular canal, saccular and utricular function, respectively. Less traumatic CI surgery was performed by the use of the RWA and insertion of flexible electrodes such as MED-EL FLEX soft, FLEX 28, and FLEX 24 (Innsbruck, Austria).

Results: Caloric response and the asymmetry ratio of cVEMP and oVEMP were examined before and after implantation using less traumatic surgical techniques. Compared with before implantation, 93.9, 82.4, and 92.5% of the patients showed preserved vestibular function after implantation based on caloric testing, cVEMP and oVEMP results, respectively. We also examined the results for vestibular function by a comparison of the 66 patients using the RWA and flexible electrodes, and 17 patients who underwent cochleostomy and insertion of conventional or hard electrodes. We measured responses using caloric testing, cVEMP and oVEMP in patients after CI. There were no differences in the frequencies of abnormal caloric and oVEMP results in the implanted ears between the RWA and cochleostomy. On the other hand, the frequency of abnormal cVEMP responses in the implanted ears in the patients who received implantation by cochleostomy was significantly higher than that in the patients undergoing surgery using the RWA.

Recently, the development of techniques such as less traumatic surgery has enabled the preservation of residual hearing and of cochlear structures after cochlear implantation (CI) surgery (1, 2). These techniques include the use of flexible electrodes (3, 4), the round window approach (RWA) (5) and steroid administration. However, consideration must still be given to the non-hearing vestibular complications that can accompany CI, resulting in balance symptoms. The incidence of vestibular symptoms, as reported previously, varies quite widely from 0.33 to 75% (6).

A total of 66 patients (21 males and 45 females) who underwent unilateral CI surgery in our center between 2009 and 2019 were included in this study after obtaining informed written consent. The 66 patients included part of the study population for whom the results of vestibular function were previously published in 2013 (8). The age at CI surgery ranged from 7 to 70 years, with a mean age of 46.6 ± 18.3 years. Twenty-five patients received implants in the right ear and forty-one in the left ear.

To preserve hearing and/or inner ear structures, we used less traumatic techniques for these patients. The less traumatic surgeries were performed by the use of flexible electrodes such as MED-EL FLEX 24™ and FLEX 28™ or FLEX soft™ electrodes (Innsbruck, Austria). The FLEX 24 electrode was implanted in 24 patients, FLEX 28 in 38, and FLEX soft in 5 patients. The full insertion of electrodes was achieved in all patients. All surgeries involving the RWA were performed by a single surgeon (S.U). With regard to steroids, systemic steroid administration was applied in patients receiving electric acoustic stimulation (EAS) using FLEX24 (2). However, steroids were not routinely used for conventional CI.

The final position of the implanted electrode array was assessed by X-ray images of the horizontal plane of the cochlear basal turn obtained using the modified Stenver's view. We measured the insertion depth angel (IDA) based on the method for the determination of insertion depth described by Trieger et al. (9).

The patients underwent caloric testing, cervical vestibular evoked myogenic potential (cVEMP), and ocular VEMP (oVEMP) both before or at 6 months−1 year after CI surgery, or both, to obtain data on semicircular canal function, saccular function and utricular function, respectively.

With regard to cVEMP testing, electromyography (EMG) was performed using a pair of surface electrodes mounted on the upper half and the sternal head of the sternocleidomastoid (SCM) muscle. The electrographic signal was recorded using a Neuropack evoked potential recorder (Nihon Kohden Co. Ltd., Tokyo, Japan). The method was described in detail in our previous report (8). The amplitude between the 13 ms positive peak and the 23 ms peak, and the background integrated EMG were measured, and the correction of the amplitude was calculated as follows (10):

oVEMP testing was measured by bone-conductive vibration (BCV). BCV was delivered in 4 ms tone bursts of 500 Hz vibration (rise/fall time = 1 ms and plateau time = 2 ms) by a hand-held 4810 mini-shaker (Bruel and Kjaer, Naerum, Denmark), which was placed on the forehead midline (Fz). The active electrode was located over the inferior orbital margin and a reference electrode was placed 2 cm below the active electrode. The ground electrode was placed on the chin. The patients lay in a supine position on the bed and looked up with head raised at ~30 degrees above straight-ahead during recording. The signals were amplified and bandpass filtered between 20 and 2,000 Hz. The stimulus intensity was 115 dB force level for 500 Hz, with an analysis time of 40 ms, and 50 responses were averaged for each run. For oVEMP, the amplitude was defined as the difference between the 10 ms negative peak (n10) and the 15 ms positive peak (p15).

The cVEMP and oVEMP asymmetry ratio was calculated as follows:

With regard to the caloric testing, the maximum slow phase velocity (mSPV) was measured by cold water irrigation (20°C, 5 ml, 20 s) (8) and was calculated as the percentage of canal paresis (CP%):

A summary of pre-operative vestibular function is shown in Table 1, and detailed data for each subject are shown in Supplementary Table 1.

A summary of vestibular preservation is shown in Table 2 and detailed data for each subject are shown in Supplementary Table 1.

Table 2. The results of vestibular changes after CI surgery.

All of the patients who underwent vestibular testing both before and after CI surgery had received CI by the RWA method and had had a FLEX 24, FLEX 28 or FLEX soft electrode inserted. We excluded the patients showing bilateral absent or unilateral absent reactions on the CI side before CI surgery. In this study, a post-operative CP% on caloric testing and AR on the cVEMP and oVEMP of 30% or more lower than the pre-operative results were defined as a decreased post-operative response. 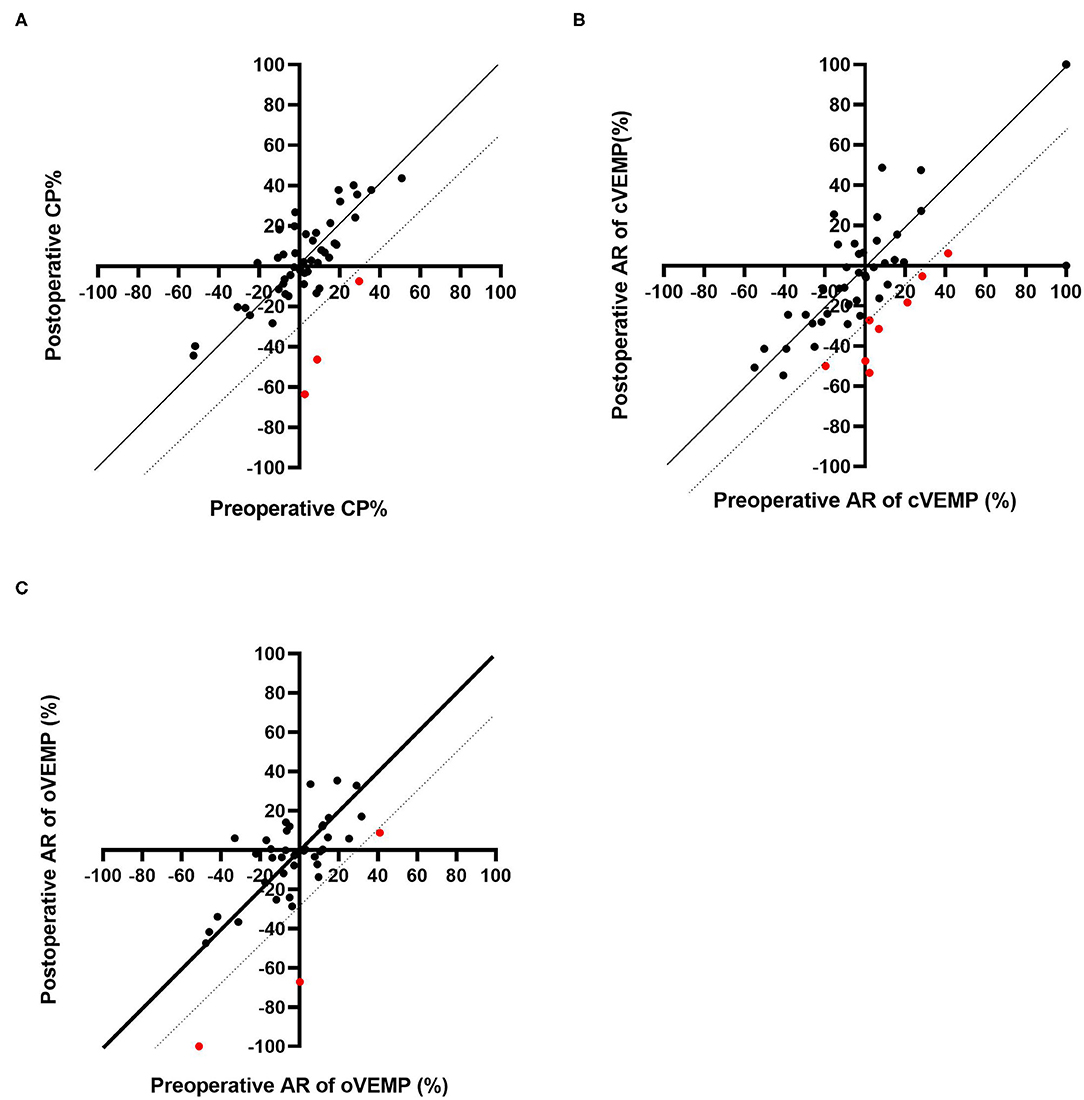 A Comparison Between RWA and Cochleostomy 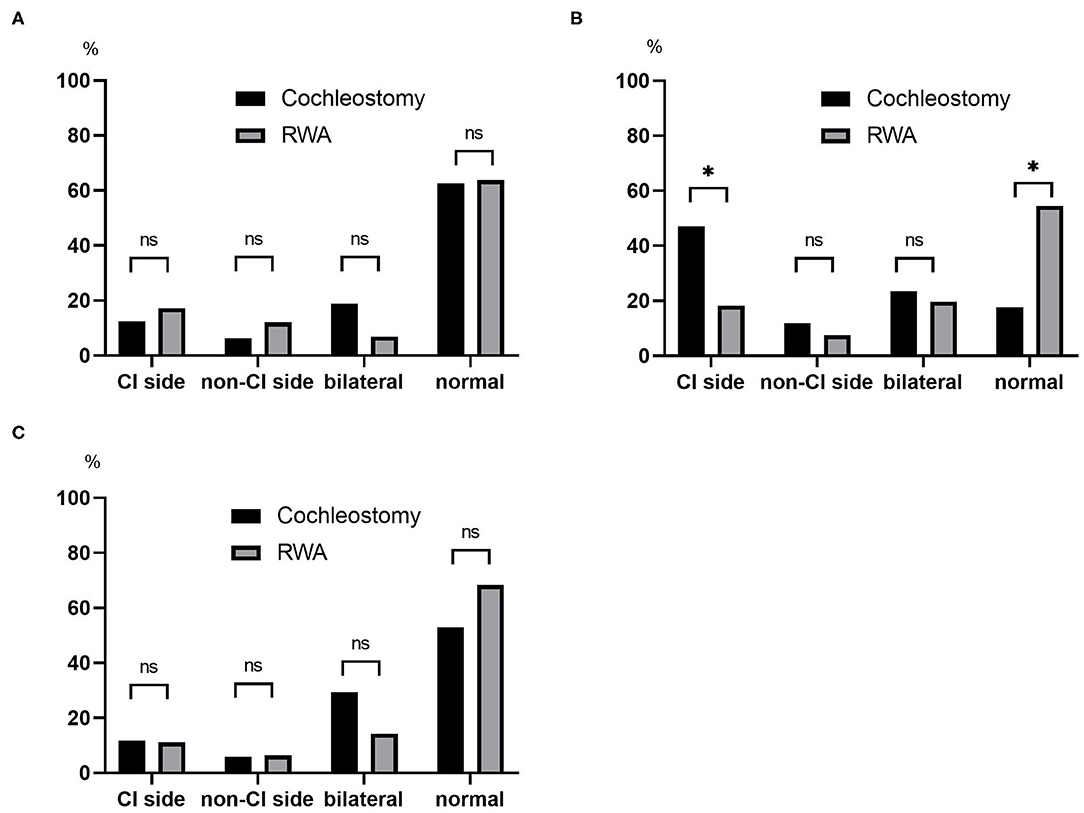 In this study, to preserve vestibular function, less traumatic CI surgical techniques (the RWA with a flexible thin electrode) were performed, and the frequencies of post-operative preservation of semicircular function, saccular function and utricular function were 93.9, 82.4, and 92.5%, respectively. 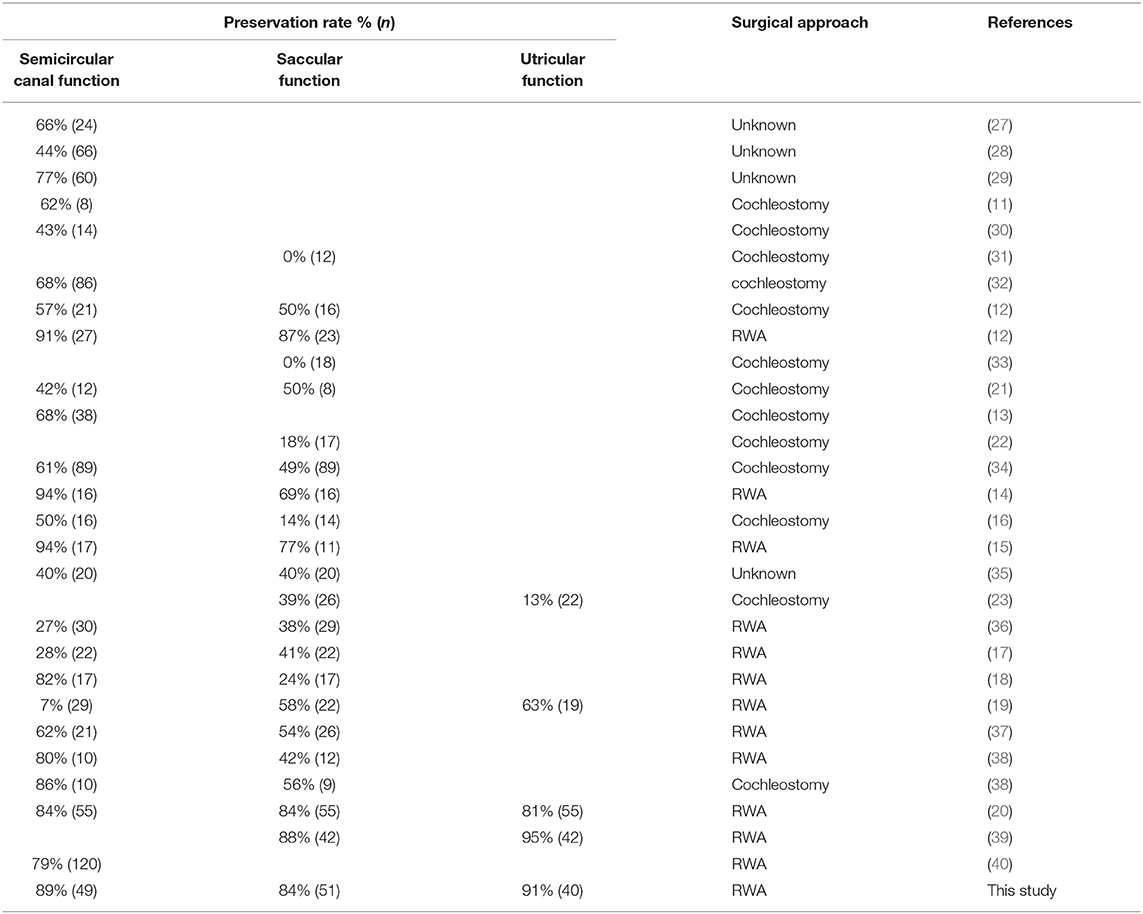 Table 3. The frequencies of post-operative vestibular preservation in the literature.

Thus, one of the reasons for such better outcomes is probably the surgical technique applied, such as the RWA and the use of flexible electrodes.

Figure 3. A comparison of the frequencies of vestibular preservation between patients undergoing the RWA and cochleostomy in the literature. The red dots indicate the present results. SCC, Semicircular canal.

Ishiyama previously reported that a histopathological study showed secondary fibrosis and endolymphatic hydrops when the cochleostomy involves the scala vestibuli (SV) (41). Other temporal bone studies have also shown that electrode insertion into the SV involves damage to the vestibular receptors. However, when the electrode was inserted into the scala tympani (ST), no vestibular damage was found (24). When considering the results of histopathological studies of cochleostomy and the RWA, Ishiyama reported that cochleostomy was significantly associated with SV fibrosis and hydrops whereas round window insertion was not (41). Adunka evaluated CI electrode insertions through the round window membrane histologically and reported that smooth implantations via the round window membrane resulted in deep, atraumatic insertions into the ST, and unintentional lesions to the basilar membrane could be avoided by using the round window as an exact anatomical landmark that is always in direct continuity with the ST (42). These histological studies imply that one of the reasons for our worse results on cVEMP testing among cochleostomy cases may be the dislocation of electrodes.

Thus, the histopathological and clinical results in previous studies have shown that the RWA preserves vestibular functions to the greatest extent and, therefore, is superior to cochleostomy.

Regarding the electrode length and IDA, the preservation rates of post-operative semicircular canal function were 95 and 90% in the patients receiving FLEX 24 and FELX 28/FLEX soft electrodes, respectively. Meanwhile, 86% of patients receiving a FLEX 24 and 80% with a FLEX 28/soft, and 100% receiving a FLEX24 and 90% with a FLEX 28/soft showed preserved post-operative saccular or utricular functions, respectively, based on cVEMP and oVEMP results. We also evaluated the relationship between IDA and vestibular preservation. There were no significant differences in IDA between patients with and without vestibular preservation based on caloric testing, cVEMP and oVEMP. In our previous study (44), we reported that 17 of 18 (94.4%) patients who had residual hearing in the low frequencies retained low-frequency hearing when implanted with longer electrodes such as FLEX 28 and FLEX soft electrodes. There were no significant differences between the shorter and longer electrodes in these patients. Similarly, the cochlear function in the present results indicates that vestibular functions can be preserved even when applying longer electrodes or with deeper insertion using flexible electrodes. A previous report by Nordfald also showed that there was no significant differences in the residual hearing and vestibular function between the FLEX 28 and the FLEX soft electrodes based on caloric testing, cVEMP and SVH/SVV results (37). These results indicate that it is possible to preserve not only residual hearing but also vestibular function by use of a longer electrode. Although it cannot be excluded that cochleosotomy insertion using atraumatic electrodes will not produce the same result, preservation of vestibular function is not influenced by electrode length, but is thought to be due to the surgical technique used, such the RWA, and the use of flexible electrodes.

The studies involving human participants were reviewed and approved by Shinshu University Ethical Committee. Written informed consent to participate in this study was provided by the participants' legal guardian/next of kin.

This research was supported by the Creation of a development platform for implantable/wearable medical devices by a novel physiological data integration system of the Program on Open Innovation Platform with Enterprises, Research Institute and Academia (OPERA) from the Japan Science and Technology Agency (JST) Grant Number JPMJOP1722 (S-iU) and a Health and Labour Sciences Research Grant for Comprehensive Research on Disability Health and Welfare from the Ministry of Health, Labour and Welfare of Japan [H29-Nanchitou(Nan)-Ippan-031, 20FC1048] (S-iU).

The Supplementary Material for this article can be found online at: https://www.frontiersin.org/articles/10.3389/fneur.2021.656592/full#supplementary-material

Copyright © 2021 Tsukada and Usami. This is an open-access article distributed under the terms of the Creative Commons Attribution License (CC BY). The use, distribution or reproduction in other forums is permitted, provided the original author(s) and the copyright owner(s) are credited and that the original publication in this journal is cited, in accordance with accepted academic practice. No use, distribution or reproduction is permitted which does not comply with these terms.