Department of Medical-Surgical Sciences and Biotechnologies, Faculty of Pharmacy and Medicine, Sapienza University of Rome, Italy

Methods: Seventeen patients with VSS were compared to 17 age- and migraine-matched controls. Visual accuracy was assessed by letter recognition and modulated by transcranial magnetic stimulation delivered to the occipital cortex at different intervals with respect to the letter presentation (40, 100, and 190 ms).

Results: Suppression of visual accuracy at the 100-ms interval was present without significant differences between VSS patients and age- and migraine-matched controls (percentage of correctly recognized trigrams, control: 46.4 ± 34.3; VSS: 52.5 ± 25.4, p = 0.56).

Conclusions: In contrast to migraine with aura, occipital cortex inhibition, as assessed with MSPA, may not be affected in VSS.

Patients with visual snow (VS) describe continuous, mostly black and white tiny flickering dots in their entire visual field, comparable to the old TV-static noise when missing the analog signal. When accompanied by other visual symptoms such as afterimages (palinopsia), impaired night vision (nyctalopia), or increased light sensitivity (photophobia), it is called visual snow syndrome (VSS) (1–3). Its pathophysiology is still under discussion, and although it is highly associated with migraine with and without aura and may partially overlap with these, recent research strongly suggests that VS is a distinct disorder (2–5). The visual disturbance sums up to a clinical picture that is best explained by dysfunction of the higher-order visual cortex. Consistently, fluorodeoxyglucose-positron emission tomography (PET) investigations showed hypermetabolism in the lingual gyrus, an area of the higher visual association cortex (3, 6). Importantly, these findings from functional neuroimaging were confirmed by voxel-based morphometry by two independent groups which demonstrated increased gray matter volume in the same cortical area (6, 7). A possible neurophysiological correlate of the involvement of higher visual areas could be the significantly prolonged latency of the late N145 potentials with normal P100 potentials in visual evoked potentials (4). However, the picture is likely more complex with studies pointing to a dysfunction of the primary visual cortex, considering thalamocortical dysrhythmia as the origin of VSS (8, 9) and demonstrating alterations also in non-visual, acoustic, and limbic areas (6).

The study was conducted in accordance with the Declaration of Helsinki and approved by the local ethics committee (227-15). All patients gave written informed consent. The results of the study were presented in preliminary format at the International Headache Conference 2017 (11).

For recruitment, the study was advertised in social media with support from the self-help group on VS, “Eye on Vision Foundation” (http://www.eyeonvision.org/). We first assessed the eligibility of interested patients during telephone interviews conducted by a headache specialist familiar with VSS. The interview was cross-checked by a second headache specialist. Inclusion criteria were age ≥ 18 years and presence of VSS (subtype black and white dots) in accordance with the criteria published previously (2). Exclusion criterion was intake of any illicit drugs currently or within 2 weeks prior to the onset of VSS. Brain MRI was normal in all subjects. Later, the VSS patients were examined at presentation by one of the two mentioned specialists. Of medications known to possibly affect cortical excitability, only one patient was on lamotrigine and three patients were on mirtazapine. Travel expenses were reimbursed, and no further payment was made for study participation. Patients with VSS were compared to age- and migraine-matched subjects.

MSPA was measured according to our previous work (10). To summarize, three-letter sequences (so-called trigrams) were presented for 30 ms on a monitor in front of the subjects. They were instructed to read the letters aloud from left to right. In a first step, training runs were performed to adjust contrast in a manner that ~80% of the letters could be recognized correctly by the subject without transcranial magnetic stimulation (TMS) intervention. In a second step, the experiment was started by presenting a series of 54 trigrams, followed each by a TMS pulse (output of at least 70% of the possible maximum output, Magstim 200, The MagStim Company Ltd, Whitland, UK) via a 90-mm circular coil to the occipital cortex in randomized intervals of 40, 100, or 190 ms in regard to the trigram presentation. The time between the start of trigram presentation and TMS pulse delivery is called stimulus onset asynchrony (SOA). Later, the percentage of correctly recognized trigrams was calculated for each SOA interval. All subjects were measured interictally; as corroborated by telephone contact, no subject reported a migraine attack or aura within 2 days after the experiment.

Anonymized data will be shared at request from any qualified investigator.

The MSPA profiles of patients with VSS and migraine-matched controls can be seen in Figure 1 and Table 1. 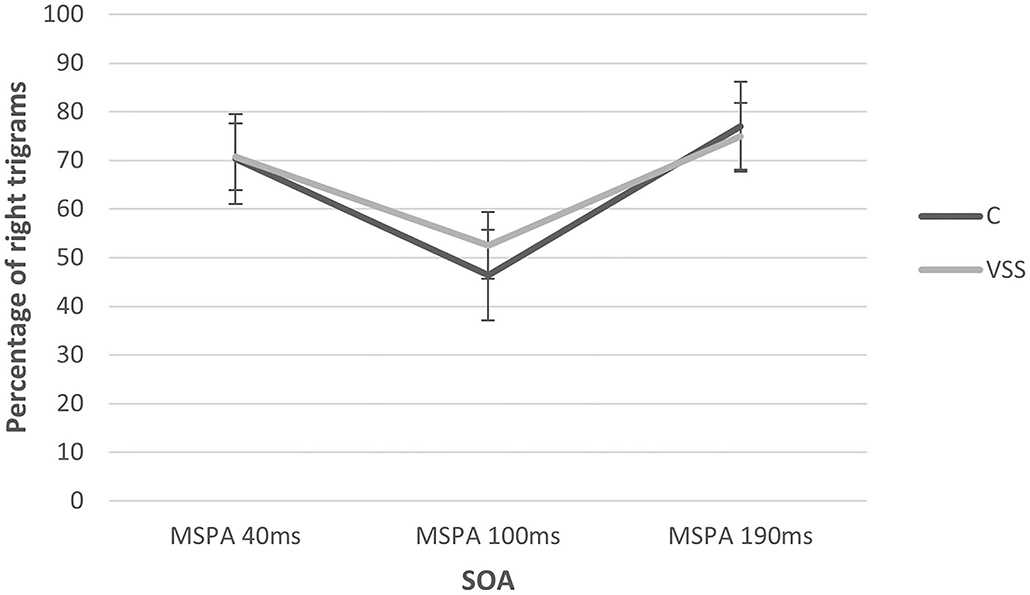 Figure 1. MSPA profiles of subjects with visual snow syndrome and migraine-matched control group at the three SOA intervals. There was a significant change with the SOA interval but no group difference. SOA, stimulus onset asynchrony.

There was a significant main effect of SOA interval (rmANOVA: Greenhouse–Geisser F 31.75, p ≤ 0.01) with a significant suppression of visual accuracy at 100 ms compared to 40 and 190 ms. There was no significant main effect of group (rmANOVA: F 0.70, p = 0.47). Additionally, we performed an explorative subgroup analysis beginning with comparing the same control group only with VSS patients without migraine aura, showing almost identical percentages of correctly recognized trigrams at 100 ms (C: 46.40 ± 34.26 vs. VSS: 46.67 ± 27.99), again without significant group differences (rmANOVA: F 0.261, p = 0.77).

The main result of this study is that magnetic suppression of perceptual accuracy is not reduced in visual snow syndrome when compared to controls matched for migraine. In this respect, VSS differs from migraine with aura (12). The significant suppression at 100 ms is comparable instead to that of patients with migraine without aura and controls without migraine (10). Previous work of Aurora and Mulleners showed that healthy controls exhibited the largest suppression at 100 ms SOA, followed by migraine patients without aura, while chronic migraine patients and episodic migraineurs with aura showed the least suppression (12, 13). Consistently, within the VSS group, subjects with migraine with aura showed a smaller MSPA compared to those without aura. However, the difference was not significant, maybe due to the small sample sizes in the subgroups.

It has been discussed that a reduced MSPA reflects a higher cortical excitability due to a deficiency of intracortical inhibition of the primary visual cortex (12). This would facilitate the initiation of cortical spreading depression, resulting in an attack of migraine with visual aura, but apparently playing a minor role in migraineurs without aura (10, 14).

Visual snow syndrome is thought to involve cortical hyperexcitability or a lack of inhibition. The present results suggest that, at least for our collective, such hyperexcitability does not seem to arise from the primary visual cortex. From the clinical description, the typical visual phenomena seem to be best explained by a dysfunction of higher-order visual cortex. This is supported by overlapping morphological and functional correlates in the visual association cortex in PET and MRI (3, 6) as well as alterations in the late visual evoked potentials (4).

One limitation of the study is the lack of matching for gender, but to the best of our knowledge, there is no evidence of sex differences in MSPA. Nevertheless, an influence cannot be excluded. Another limitation is the lack of matching for aura, but based on our explorative subgroup analysis irrespective of inclusion or exclusion of the aura patients in the VSS group, the results remained unchanged. Additionally, it should be mentioned that, in the VSS group, the disability caused by headache measured by Migraine Disability Assessment was lower compared to the migraine-matched controls, as we matched for comorbidity and not severity. Lastly, we could have added a healthy control group without comorbid migraine and give more details on clinical data.

This study demonstrates that magnetic suppression of perceptual accuracy, in contrast to the situation in migraine with aura, is not reduced in VSS compared to migraine-matched controls. Therefore, although hyperexcitability apparently occurs in both VSS and migraine aura, the locations seem to be different. The primary visual cortex might not be the main location in VSS.

The studies involving human participants were reviewed and approved by Ludwig Maximilians University Munich (227-15). The patients/participants provided their written informed consent to participate in this study.

This study received funding from Deutsche Migräne- und Kopfschmerzgesellschaft (www.dmkg.de), Eye on Vision Foundation (www.eyeonvision.org), Baasch Medicus Foundation, and Friedrich-Baur Foundation. This study was supported by the self-help group for visual snow (Eye On Vision Foundation) by communicating the study to the patients.

We thank all the patients who have taken part in the study.

The Supplementary Material for this article can be found online at: https://www.frontiersin.org/articles/10.3389/fneur.2021.658857/full#supplementary-material

Copyright © 2021 Eren, Ruscheweyh, Rauschel, Eggert, Schankin and Straube. This is an open-access article distributed under the terms of the Creative Commons Attribution License (CC BY). The use, distribution or reproduction in other forums is permitted, provided the original author(s) and the copyright owner(s) are credited and that the original publication in this journal is cited, in accordance with accepted academic practice. No use, distribution or reproduction is permitted which does not comply with these terms.