Introduction: Knee osteoarthritis is a common disease in the elderly. Patients suffer from long-term chronic pain and reduced life quality. Acupuncture has been proven to be an effective treatment for KOA. However, the neural mechanism of acupuncture is unclear, so far. Periaqueductal gray (PAG) and raphe nuclei (RPN) are essential structures associated with chronic pain in human brains. This study aims to investigate functional connectivity (FC) changes of PAG and RPN in KOA to interpret the neural mechanism of acupuncture.

Methods: In 15 patients with KOA and 15 healthy controls (HC), we acquired Visual Analog Scale (VAS) scores and resting-state fMRI images of each participant before and after acupuncture stimulation on EX-LE5 acupoint. Then, PAG and RPN were selected as seeds to perform FC analysis based on resting-state fMRI images. Finally, we compared FC patterns of PAG and RPN between patients with KOA and HC, then between pre-acupuncture and post-acupuncture. Correlations between FC values and VAS scores were calculated as well.

Knee osteoarthritis is a common type of arthritis and prevalently affects the quality of life among the elderly (1). Chronic pain is the primary complaint associated with KOA, severely influencing the patients by physical dysfunction and muscular weakness (2, 3). Acupuncture is considered an effective therapy to relieve the chronic pain of KOA (4–6), but the mechanism underlying its clinical efficacy is still controversial. Previous studies have reported that chronic pain can induce changes in brain function (7–9), and acupuncture stimulation can mediate brain function to relieve chronic pain (10). Therefore, this study aims to explore the mechanism of acupuncture treatment by investigating how acupuncture induces the functional connectivity (FC) of brains in patients with KOA.

Periaqueductal gray and raphe nuclei, located in the brainstem, play a well-established pain responses because these structures have optimal anatomical positioning to integrate relevant contextual information, driving the central neural system to release pain-related neurotransmitters (11, 12). Recently, functional MRI (fMRI) studies have investigated how the activation of PAG and RPN contributes to neural mechanisms underlying chronic pain. Lee et al. applied the FC method to test the FC changes between patients with chronic migraine and with episodic migraine. They revealed that FC was enhanced, from PAG and RPN to cortical regions, in patients with chronic migraine (13). Notably, a recent study on the mouse model of OA has found that, in the early phase of OA pain, the PAG network, especially the connection between PAG and RPN, may contribute to the transition from acute to chronic OA pain (14). Another study demonstrated that dorsal RPN and ventral PAG have the potential to regulate pain by releasing dopamine and glutamate (15).

Acupuncture, one of the traditional Chinese treatment modalities, has a good therapeutic effect on chronic pain (16), that includes chronic migraine and chronic low back pain. Some previous studies reported that the possible mechanism of relieving pain by acupuncture stimulation was mediating through central pain modulation of the PAG and RPN in the brainstem (17, 18). Although some studies have supported that acupuncture is an efficient treatment tool for KOA pain, the neural mechanism underlying acupuncture treatment on KOA is unclear. Therefore, this study aimed to clarify the acupuncture neural mechanism on KOA by using fMRI. Considering the above, we speculated that acupuncture stimulation could alter FC of PAG and RPN in patients with chronic KOA pain, which is associated with pain-related clinical symptoms.

Fifteen patients with chronic KOA pain (mean age: 59.13 ± 10.27; eight females), whose pain lasts at least 4 months, were recruited from the First Affiliated Hospital of Anhui University of Chinese Medicine (AUCM), while 15 HC (mean age: 58.53 ± 8.15; 11 females) were recruited from the local community. The patients who presented with neurological or psychiatric diseases, poorly controlled hypertension, head injury, or any other conditions that might affect the study were excluded. All the participants had signed an informed consent before the study, which was approved by the Ethics Committee of the First Affiliated Hospital of AUCM (No. 2021AH-29).

The diagnostic criteria of KOA were determined according to the Chinese Guideline for Diagnosis and Treatment of Osteoarthritis (2021 edition) formulated by the Joint Surgery Branch of the Chinese Orthopedic Association (19). Patients with KOA were diagnosed by the results of both clinical and X-ray examinations, plus the following rules: (1) middle-aged and elderly people; (2) recurrent knee pain for nearly a month; (3) morning stiffness ≤ 30 min; and (4) bone frictions when physically exercising.

Pain intensity was evaluated by the Visual Analog Scale (VAS), a tool widely used to measure pain (20). The patients were asked to indicate their perceived pain intensity as a point along a 100-mm horizontal line, and the length from the left edge to this point was measured to acquire a VAS score. The VAS score ranges from 0 to 10, where VAS = 0 represents the patient feels no pain, VAS < 3 indicates the patient feels mild but tolerable pain, 4 < VAS < 6 means the patient feels pain and sleep is affected, and 7 < VAS < 10 depicts the patient feels severe pain, which is unbearable and already affects the sleep and appetite. Detailed information is presented in Supplementary Table 1.

For each participant, resting-state fMRI images were preprocessed using a combination of analysis packages, including FSL and AFNI. Functional images were preprocessed using the following steps: (1) the first 10 functional images were discarded to eliminate transients and account for T1 relaxation effects, followed by slice timing to compensate for acquisition delays across slices; (2) motion correction was performed by realigning all functional images to the middle image, and the data with head motion over 2 mm or 2° were excluded; (3) functional images were co-registered to the high-resolution anatomical images, and then normalized to Montreal Neurological Institute standard brain; (4) voxels were re-sampled to 2 × 2 × 2 mm3 resolution; (5) images were spatially smoothed with a 6-mm full width at half-maximum (FWHM) Gaussian kernel; (6) the data were linearly detrended, and the residual signals were band-pass temporal filtered at.01–0.1 Hz; and (7) nuisance variable regression was performed to regress out the six head motion parameters, as well as the signals of white matter (WM) and cerebrospinal fluid (CSF).

To evaluate FC changes of PAG and RPN, we first selected these two regions as seeds for FC analysis. Seed of PAG was structurally defined with the “atlas of the basal ganglia” (https://www.nitrc.org/projects/atag/), in which the nonlinear elderly atlas of PAG was selected for FC analysis. RPN was divided into dorsal and medial sub-regions, defined based on a previous study (23). The seeds of PAG and RPN are shown in Figure 1. 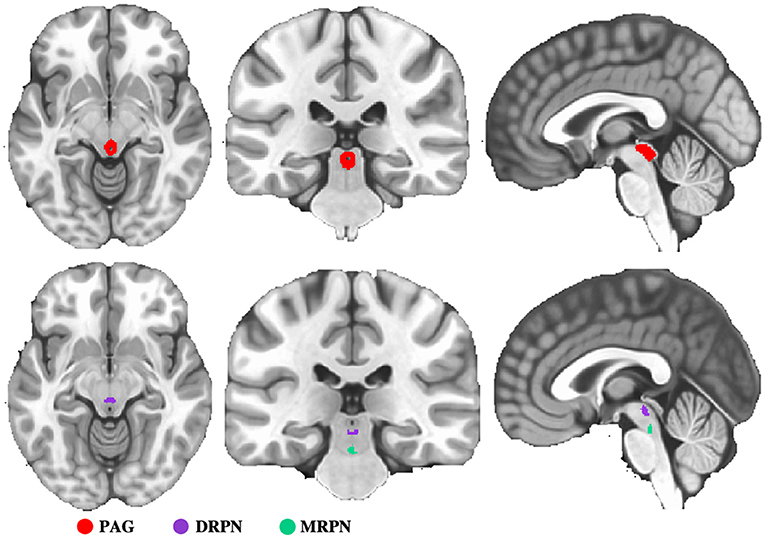 We explored the relationships between FC values and the VAS scores in the patient group to identify how acupuncture affects chronic pain through mediating brain function. For all correlation analyses, we used partial correlations to factor out age and sex. 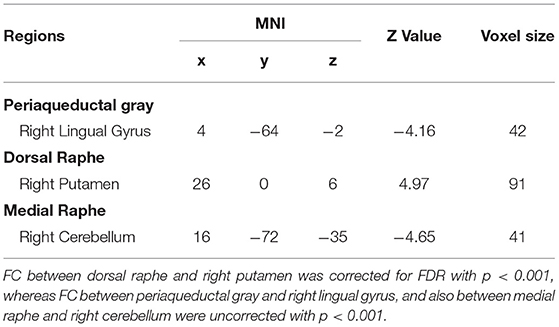 Table 1. Group differences of FC between KOA and HC at post-acupuncture. 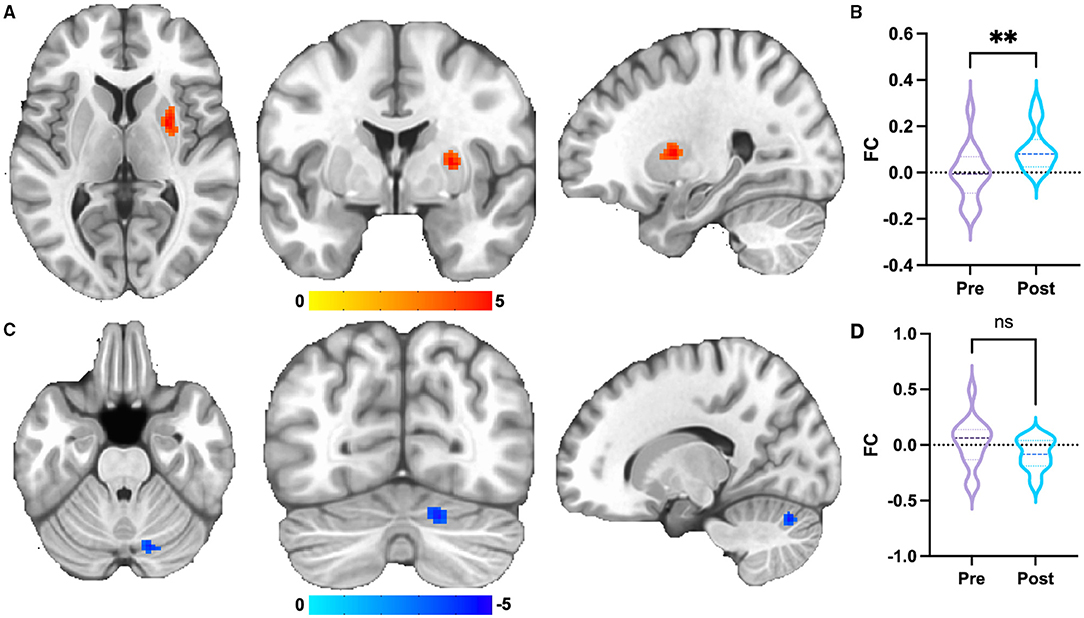 The brainstem involvement in relieving chronic pain has been investigated in previous studies, demonstrating a mediating role of PAG and RPN, as well as their interactions with cortical regions (24, 25). Therefore, we applied the resting-state fMRI to evaluate the neural mechanism underlying acupuncture, intervening in chronic KOA pain by investigating the FC changes of the PAG and RPN mediated by acupuncture. Our results suggested that acupuncture enhanced FC between dorsal RPN and the right putamen in patients with KOA, and enhanced FC is associated with chronic pain intensity.

Periaqueductal gray (PAG) plays a central role in the descending modulation of pain (26). Dysfunction of PAG is thought to contribute to dysregulation of pain, which is the main reason for chronic pain (24). Previous studies have demonstrated that FC between PAG and prefrontal cortex/anterior cingulate cortex in low back chronic pain (27) and chronic migraine (28) is enhanced after acupuncture treatment, associated with the relieving of pain symptoms (28). However, in our study, FC differences of PAG were not found between patients with KOA and HC. Acupuncture stimulation has also not induced PAG-related FC changes in patients with KOA with chronic pain. These results were inconsistent with previous studies. In this study, the patients also received several other medications in addition to acupuncture treatment, which possibly drove the FC of PAG close to the normal level. Previous studies have demonstrated that transient drug therapy could enhance the patients' brain function, whereas the patients were also accompanied by clinical symptoms (29, 30). This is the possible explanation why we did not observe the changes in PAG function in the patients with chronic KOA pain.

Previous studies have interpreted the neural mechanism of dorsal RPN in the regulation and the perception of pain from electrophysiology and neuroimaging, based on the fact that FC between dorsal RPN and cortical/subcortical regions was increased in patients with chronic pain after treatment (13, 16). The striatum receives serotonin innervation from the dorsal RPN, which implicates the behaviors of emotions, depression, and anxiety (31, 32). This evidence was further proved in a PET-fMRI study, revealing that dorsal RPN has strong functional connections with striatum (23). In present studies, FC between dorsal RPN and right putamen was enhanced after acupuncture stimulation rather than FC between medial RPN and right cerebellum. Moreover, the rising value of FC was associated with pain intensity. In summary, our results may explain that acupuncture stimulation induces the enhanced FC between dorsal RPN and striatum to drive the patients' brain with KOA to perceive the pain.

In conclusion, our results have demonstrated that acupuncture stimulation can enhance FC between dorsal raphe and striatum, illustrating a neural mechanism that acupuncture can drive the patients' brain, with KOA, to perceive pain.

The studies involving human participants were reviewed and approved by the Ethics Committee of the First Affiliated Hospital of Anhui University of Chinese Medicine. The patients/participants provided their written informed consent to participate in this study.

The Supplementary Material for this article can be found online at: https://www.frontiersin.org/articles/10.3389/fneur.2021.813723/full#supplementary-material

Copyright © 2022 Gao, Shi, Hu, Zha, Yuan, Shu, Fan, Bai, Xie, Cui, Wang, Li, Qiu and Yang. This is an open-access article distributed under the terms of the Creative Commons Attribution License (CC BY). The use, distribution or reproduction in other forums is permitted, provided the original author(s) and the copyright owner(s) are credited and that the original publication in this journal is cited, in accordance with accepted academic practice. No use, distribution or reproduction is permitted which does not comply with these terms.