Methods: We analyzed data from the anterior circulation database of our hospital (August 2018–June 2021). Multivariate logistic regression analyses identified the predictors of clinical outcomes for patients with large baseline infarcts (>50 ml) assessed by the MIStar software. The receiver operating characteristic (ROC) analysis was used to explore the cutoff value of factors.

Therefore, we explored the clinical prognosis and factors after MT in patients with large acute area cerebral infarction assessed by CTP and the optimal threshold of CBF for estimating ischemic core.

The study was an observational retrospective cohort study. We recorded patients' clinical and imaging data, such as demographics, past medical history, symptomatic intracranial hemorrhage, and 3-month clinical prognosis.

The data were obtained from the anterior circulation database of a comprehensive stroke center. The patient or the proxy signed the informed consent.

The assessment of clinical prognosis was the use of the mRS score at 3 months, and the definition of functional independence outcome was a score of 2 or less. The definition of a favorable outcome was the mRS score of 3 or less. The assessment of reperfusion was the modified treatment in cerebral infarction (mTICI) scale, and the substantial reperfusion was the state of 2b, 2c, or 3. The secondary outcomes, such as 3-month mortality and sICH within 7 days, were also assessed. The definition of sICH was according to the Heidelberg Bleeding Classification (12).

Continuous data were presented as mean ± SD and categorical data as frequency and percentage. Analysis was carried out with an independent-samples t-test and the chi-square and Fisher's exact tests.

Univariate logistic regression was used to analyze potential factors, and a covariate with a univariate p-value < 0.05 was included in multivariate logistic regression to identify predictors of clinical outcomes. The odds ratio (OR), 95% confidence interval (CI), and p-value were determined for factors of the univariate and multivariate models. The receiver operating characteristic (ROC) analysis was used to explore the cutoff value of factors.

Statistical significance was defined as p < 0.05 and an OR with a 95% CI. Statistical analysis was carried out with SPSS version 22.0 (SPSS Inc, Chicago, Illinois). 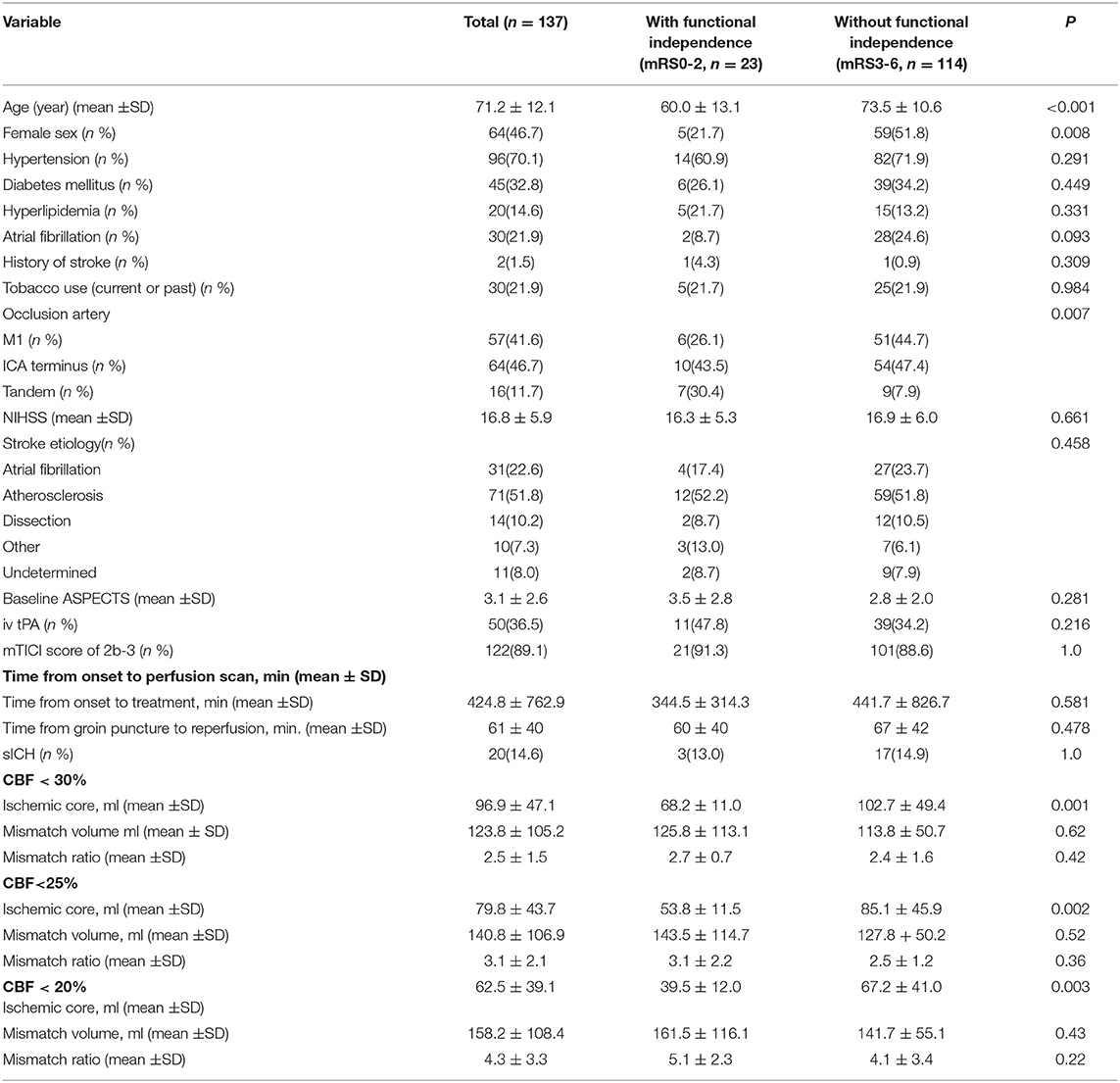 For patients with mRS 0–3 as the dependent variable, 25.5% (35/137) of patients had a favorable outcome at a 3-month follow-up. The unfavorable outcome was associated with higher age, occlusion artery of MCA and ICA terminus, larger ischemic core volume (calculated by CBF < 30%), atrial fibrillation, and higher NIHSS (Supplementary Table 1).

A total of 20 (14.7%) patients had sICH, including 3 (13.0%) patients with functional independent and 17 (14.9%) patients with poor outcome (p = 1.0). In the present study, factors associated with sICH were hypertension, hyperlipidemia, and the use of tobacco and recombinant tissue plasminogen activator (rt-PA) (Supplementary Table 2). Hypertension and the use of rt-PA treatment were independent factors of sICH (Table 2). 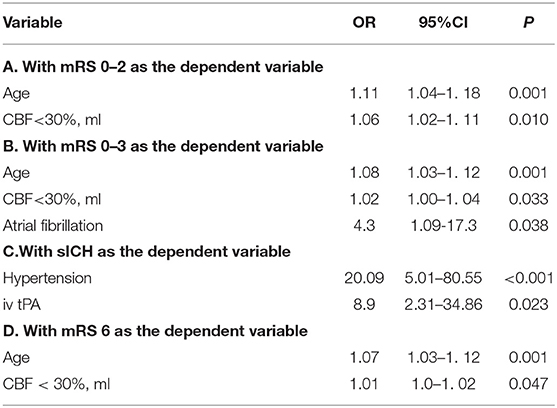 At a 3-month follow-up, the mortality rate was 36.5% (50/137). The multivariable analysis considered higher age and larger ischemic core volume (calculated by CBF < 30%) as independent risk factors of mortality (Table 2). 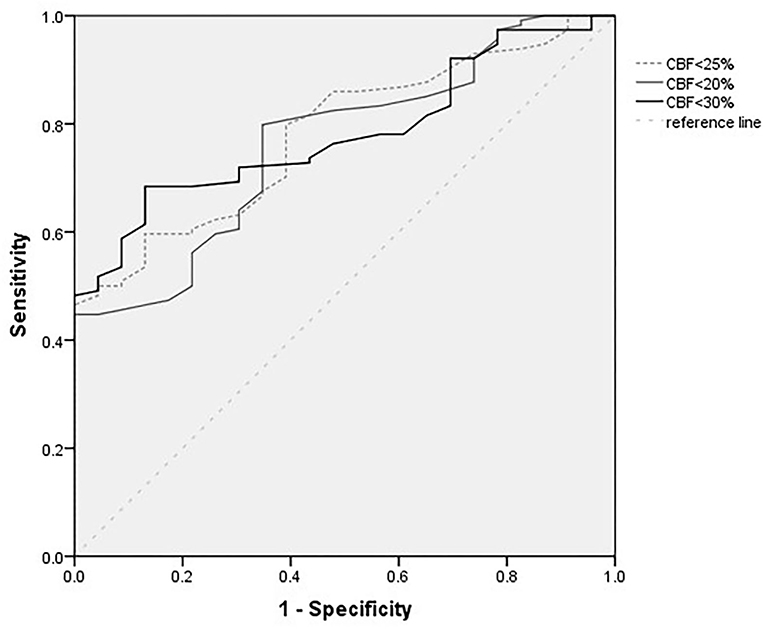 Figure 2 shows the ROC analysis for the prediction of functional independence outcome by the ischemic core volumes (calculated by CBF < 30%, ≥ 70 ml) and age. The cutoff value of core volume was 90 ml, and the age was 76 years old. The highest sensitivity of these two factors was 0.66 and 0.51, and the specificity was 0.97 and 0.90, respectively. 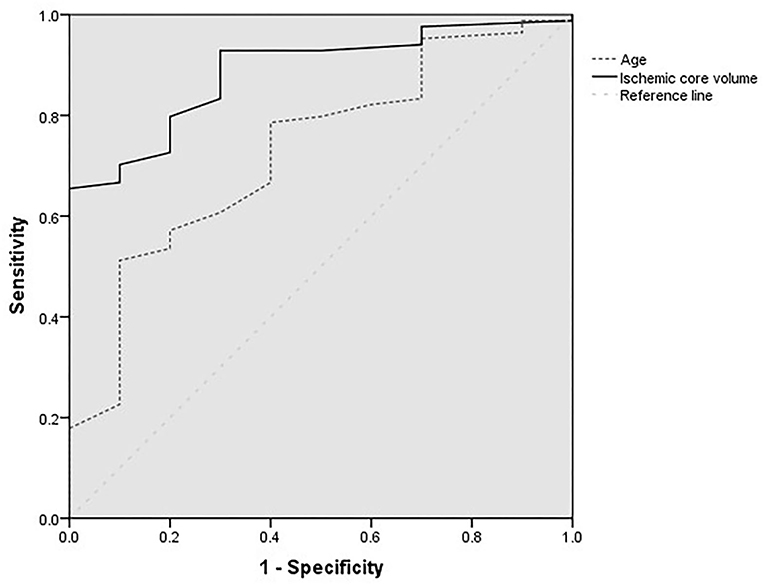 In the present study, we used the CTP to assess the large baseline ischemic core volume and was consistent with previous studies (9, 10).

Our study also found that higher age was the independent factor of poor outcomes. Mourand and Danière reported that the cutoff value of 70 years was the treatment consideration, and patients younger than 70 years had a better outcome after MT (21, 22). In our study, the ROC analysis showed that patients over 76 years old had a worse outcome, which means that patients older than 76 years with large cores may not benefit from MT.

Gilgen reported that the rate of sICH in patients with large cores (>70 ml) was 16.1% (13), which was consistent with our study (sICH: 14.6%). No significant difference emerged in our study between patients with functional independence outcomes and patients without independence outcomes. However, the Highly Effective Reperfusion evaluated in Multiple Endovascular Stroke Trials (HERMES) study suggests a higher rate of sICH in patients with large volume infarcts treated by MT. So, it is worth looking for factors of sICH. In our study, hypertension was the independent factor of sICH. Chen also reported that patients with higher hypertension were more likely to have sICH (23). More studies are needed to evaluate the factors and find the cutoff value of hypertension. The randomized trials of intravenous Alteplase before MT in Asia and Europe showed that the percentage of sICH was similar between the two groups, which means that the use of rt-PA before MT did not increase the risk of sICH more than that of direct MT (24, 25). However, we found that intravenous Alteplase before MT increased the risk of sICH in the present study, which may be associated with large baseline infarcts. The factors of sICH and bridging thrombectomy for large baseline infarcts after thrombolysis are required to be studied.

The present study has several limitations. First, this is a retrospective study that leads to a selection bias. Second, the follow-up time is only 3 months, and the functional independence outcome may be underestimated. Third, we used the software of MIStar to assess the core volume, which may differ between different software packages, such as RAPID software, though previous studies have confirmed the efficacy of MIStar in the use of assessing core volume (29).

The studies involving human participants were reviewed and approved by the Ethics Committees of Zhangzhou Shi Hospital. The patients/participants provided their written informed consent to participate in this study.

This study was supported by the National Health Commission Capacity Building and Continuing Education Center GWJJ2021100203.

The Supplementary Material for this article can be found online at: https://www.frontiersin.org/articles/10.3389/fneur.2022.856403/full#supplementary-material

Copyright © 2022 Yang, Lin, Lin, Wu, Yi and Chen. This is an open-access article distributed under the terms of the Creative Commons Attribution License (CC BY). The use, distribution or reproduction in other forums is permitted, provided the original author(s) and the copyright owner(s) are credited and that the original publication in this journal is cited, in accordance with accepted academic practice. No use, distribution or reproduction is permitted which does not comply with these terms.