Background: Vaccination against SARS-CoV-2 has been conducted frequently to limit the pandemic but may rarely be associated with postvaccinal autoimmune reactions or disorders.

Case presentation: We present a 35-year-old woman who developed fever, skin rash, and headache 2 days after the second SARS-CoV-2 vaccination with BNT162b2 (Pfizer/Biontech). Eight days later, she developed behavioral changes and severe recurrent seizures that led to sedation and intubation. Cerebral magnetic resonance imaging showed swelling in the (para-) hippocampal region predominantly on the left hemisphere and bilateral subcortical subinsular FLAIR hyperintensities. Cerebrospinal fluid analysis revealed a lymphocytic pleocytosis of 7 cells/μl and normal protein and immunoglobulin parameters. Common causes of encephalitis or encephalopathy such as viral infections, autoimmune encephalitis with well-characterized autoantibodies, paraneoplastic diseases, and intoxications were ruled out. We made a diagnosis of new-onset refractory status epilepticus (NORSE) due to seronegative autoimmune encephalitis. The neurological deficits improved after combined antiepileptic therapy and immunomodulatory treatment including high-dose methylprednisolone and plasma exchange.

Conclusions: Although a causal relationship cannot be established, the onset of symptoms shortly after receiving the SARS-CoV-2 vaccine suggests a potential association between the vaccination and NORSE due to antibody-negative autoimmune encephalitis. After ruling out other etiologies, early immunomodulatory treatment may be considered in such cases.

Adverse effects of SARS-CoV-2 vaccination with mRNA vaccines are rare and mostly limited to local reactions or slight systemic symptoms (1) including fatigue and headache most commonly. Generally, post-vaccination autoimmune encephalitis is rare (2, 3), but it has been reported to have an association with the adenoviral vector vaccine ChAdOx1 (Oxford-AstraZeneca) (4) as well as the mRNA vaccine (Pfizer/Biontech) for SARS-CoV-2 (3, 5).

Here, we describe a case of new-onset refractory status epilepticus (NORSE) due to autoantibody-negative autoimmune encephalitis in close temporal association with the second SARS-CoV-2 vaccination dose of BNT162b2 (Pfizer/Biontech).

A 35-year old woman was referred to our center with recurrent focal to bilateral convulsive seizures after an episode of fever, headache, and skin rash 6 days prior. Two days before the onset of fever, she received the second dose of an mRNA-based SARS-CoV-2 vaccine (BNT162b2, Pfizer/Biontech). The first dose was well-tolerated. The patient's medical history revealed only sporadic but not recent cocaine consumption and mild SARS-CoV-2 infection a year before the vaccination.

The clinical, laboratory, and imaging findings are summarized in Table 1 and are illustrated in Figure 1. On admission, the patient presented with fever of up to 40°C, visual impairment, behavioral changes, recurrent focal to bilateral tonic-clonic seizures, reduced level of consciousness, and choreatic movements. On admission, moderately elevated TSH, normal free T3 and T4 hormone levels, and slightly elevated liver function tests possibly due to recent overuse of paracetamol were found in the blood test. Drug screening of urine was negative. 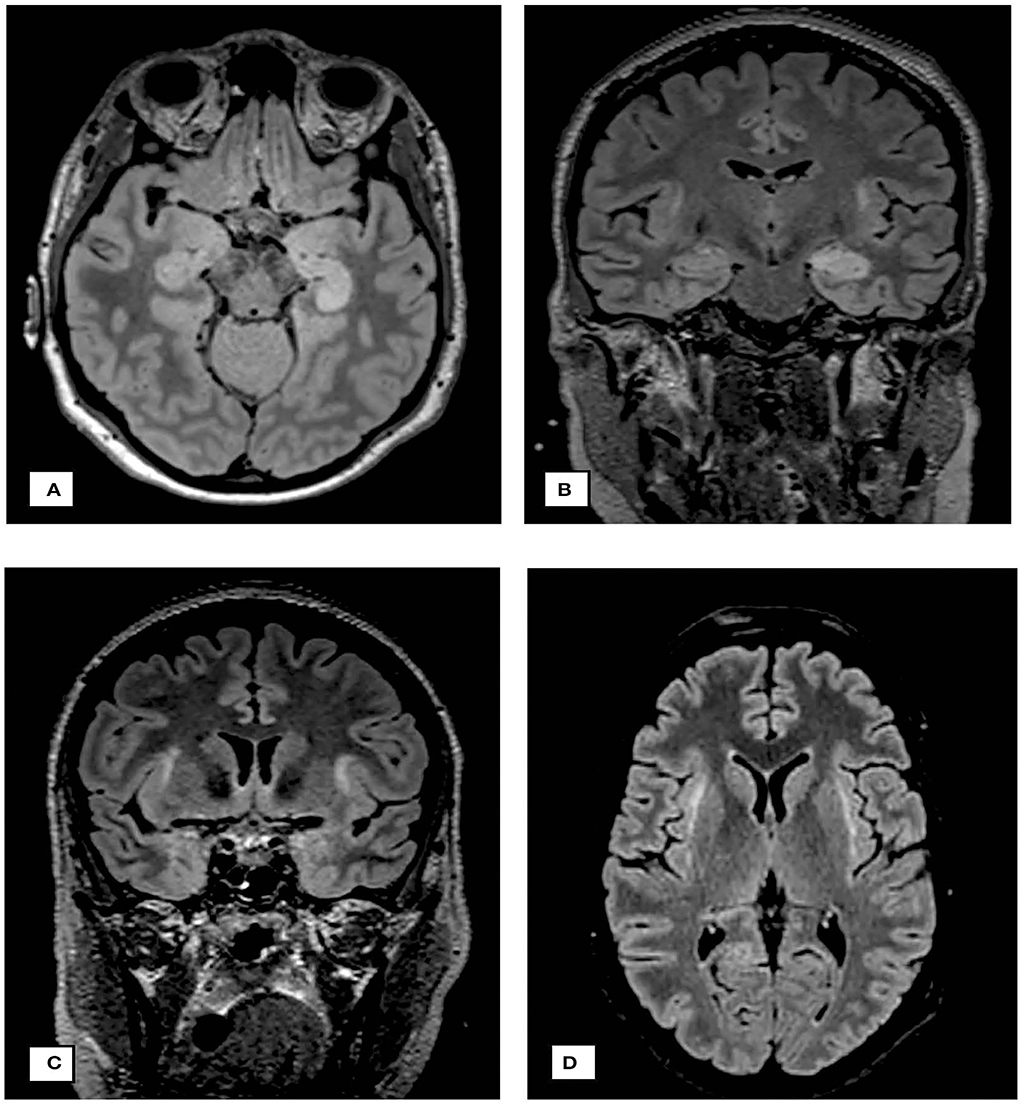 Figure 3. Neuroimaging findings. (A) cMRI on day 13: axial FLAIR sequence demonstrating edematous changes in hippocampus and parahippocampal gyrus predominantly on the left side. (B) cMRI on day 23: coronary FLAIR sequence demonstrating progression of edema on both sides, the hippocampus and parahippocampal gyrus, additional subcortical FLAIR hyperintensities subinsular on both sides. (C,D) demonstrate the claustra hyperintensities.

Due to recurrent convulsive seizures without regaining consciousness, a diagnosis of new-onset refractory status epilepticus (NORSE) was made. Levetiracetam up to 4 g/d and lacosamide up to 200 mg/d were started. Under continuous EEG monitoring, phenytoin up to 750 mg/d, midazolam up to 0.57 mg/kg/h, and ketamine up to 4 mg/kg/h were added. Phenytoin was later replaced by phenobarbital. Initially, acyclovir 3 × 10 mg/kg body weight/day and ceftriaxone were given until the CSF and serum testing for herpes viral and bacterial CNS infections turned negative. Immunomodulatory treatment with high-dose methylprednisolone (5 days of 1,000 mg/d IV) was started 2 days after hospital admission with subsequent slow tapering over 8 weeks. Because of continued seizures, plasma exchange for over 10 days starting on day 7 after the admission was performed.

Subsequently, the patient's condition rapidly improved beginning on day 12 after the admission; she regained full consciousness and had only infrequent seizures. The follow-up MRI 1 month after the hospital admission showed edema reduction in the hippocampal, amygdala, and external capsule. On discharge, she had persisting moderate mnestic deficits and infrequent seizures (2–3/month). However, after 2 months, the patient was readmitted to our hospital because of deterioration in seizure frequency (2–3 serial seizures) and neuropsychological deficits. She again received high-dose methylprednisolone for 5 days, which led to significant reduction in seizure frequency.

Whether the patient's history of SARS-CoV-2 infection approximately 1 year before the encephalitis may have played a role remains unknown. Our findings should encourage clinicians to consider SARS-CoV-2 vaccination or infection as a potential trigger for autoimmune encephalitis.

This study was partly supported by the SNF (Grant No: 4078P0_198345, title: Protective and Pathogenic T Cell Immunity During SARS-CoV-2 Infection) and the Loop Zurich, COVID-19 project (Title: SARS-CoV-2-Induced Immune Alterations and their Role in Post-COVID Syndrome).

We would like to extend our acknowledgment to Giselle Golby who revised the manuscript for medical English.

Copyright © 2022 Werner, Brandi, Jelcic and Galovic. This is an open-access article distributed under the terms of the Creative Commons Attribution License (CC BY). The use, distribution or reproduction in other forums is permitted, provided the original author(s) and the copyright owner(s) are credited and that the original publication in this journal is cited, in accordance with accepted academic practice. No use, distribution or reproduction is permitted which does not comply with these terms.