Objective: This study was aimed to investigate the characteristics of the amplitude of low-frequency fluctuation (ALFF) at specific frequencies in severe obstructive sleep apnea (OSA) patients. A comparison was made between pre-CPAP treatment and one night after continuous positive airway pressure (CPAP) treatment.

Methods: 30 severe OSA patients and 19 healthy controls (HC) were recruited. The ALFF method was used to assess the local features of spontaneous brain activity and calculated at different bands (slow-5 and slow-4). A correlation analysis was performed to evaluate the relationship between the changes of the ALFF and polysomnography data.

Conclusion: We found that the use of slow-4 was more specific in OSA studies. These results suggested that the severe OSA patients have frequency-related abnormal spontaneous neural activity, which may contribute to a better understanding of the pathological basis of OSA-related diseases and provide a potential therapeutic target for OSA patients.

Obstructive sleep apnea syndrome (OSA) is a common sleep disorder characterized by frequent upper airway collapse during sleep, leading to intermittent hypoxemia, sleep fragmentation and changes in sleep structure (1, 2). OSA is associated with a range of harmful effects, including excessive daytime sleepiness, increased risk of work-related injuries and reduced quality of life. In addition, OSA is a multisystem chronic disease which often comorbid to various other diseases, such as heart disease, hypertension, cerebrovascular disease, reflux esophagitis, depression, anxiety, insomnia, etc. (3–6). To date, the underlying pathophysiological mechanisms associated with OSA are not fully understood.

Non-invasive neuroimaging techniques have been widely used to explore the pathophysiological mechanisms of various diseases, such as neurological and psychiatric disorders. Different neuroimaging techniques have been used to explore related structural, functional, and metabolic alterations in OSA patients (7–9). Many previous studies (10–13) using structural neuroimaging have suggested that OSA patients may have brain tissue damage. Resting-state functional magnetic resonance imaging (rs-fMRI) is an oxygen-dependent brain functional imaging method, which can give more accurate structural and functional relationships (14). As a reliable measure of rs-fMRI techniques, the amplitude of low-frequency fluctuations (ALFF) has been widely applied to assess spontaneous neural activity related to brain metabolism and brain function (15). Therefore, using rs-fMRI techniques such as ALFF measurement to conduct in-depth research on OSA patients and explore their brain changes has profound significance.

To date, most rs-fMRI studies have detected spontaneous low-frequency oscillatory (LFO) activity in a specific frequency band of 0.01–0.08 Hz. It is proposed that neural oscillations with different frequencies in the human brain may be sensitive to activity in different regions and can be used to reflect different physiological functions of brain activity (16). The rs-fMRI LFO can be divided into four different frequency bands [slow-5 (0.01–0.027 Hz), slow-4 (0.027–0.073 Hz), slow-3 (0.073–0.198 Hz) and slow-2 (0.198–0.25 Hz)] (17, 18). However, only the traditional 0.01–0.08 Hz spectrum has been used to investigate OSA patients (19, 20). These researches (19, 20) reported that OSA patients had higher ALFF values in the right middle cingulate, left medial superior frontal gyrus, right anterior cingulate, right hippocampus, and right inferior occipital gyrus. The ALFF values were lower in the left inferior temporal gyrus and right cerebellum. In our study, the slow-5 and slow-4 bands were examined because they contain most of the traditional 0.01–0.08 Hz spectrum and there is minimal overlap with potential physiological noise frequencies. For example, Hoptman's study (21) showed that patients with schizophrenia were generally abnormal in the slow-4 band. Wang's study (22) also suggested that the brain's intrinsic activity patterns were sensitive to specific frequency bands such as slow-4 and slow-5 in Parkinson's disease patients. To our knowledge, no research has investigated the frequency-dependent ALFF in OSA patients. It would be necessary to differentiate the frequency bands to examine the ALFF in OSA patients.

Continuous positive airway pressure (CPAP) is the gold standard treatment for moderate/severe OSA patients (23). Previous studies have shown that brain damage may occur in OSA patients due to long-term sleep fragmentation and hypoxia, which can be ameliorated by CPAP. For example, brain structural imaging studies showed that after 3 months of CPAP treatment, partial white matter integrity was restored (24, 25), as well as the moderate improvements in mood, attention, and executive function. In addition, OSA patients treated for a longer period (6 or 12 months) had brain metabolite levels and brain volume changes in gray (26) and white matter integrity (24) in multiple regions of the brain which were similar to those of well-sleep people, suggesting that chronic brain damage in OSA patients can be reversed by CPAP treatment.

Thirty newly diagnosed, untreated male OSA patients and nineteen healthy controls (HC) were recruited for this study from the Sleep Medicine Center of West China Hospital, Sichuan University. In this study, all subjects were recruited based on the following criteria: (1) male, (2) OSA patients with AHI>30, HC AHI <5, (3) age 20-60 years. In addition, the following characteristics were excluded: (1) non-right-handed. (2) A history of neurological or psychiatric diseases (such as neurodegenerative diseases, epilepsy, brain trauma, depression, bipolar disorder) or other sleep disorders (such as insomnia); (3) MRI contraindications (such as metal implants); (4) shift work; (5) abuse of illicit drugs. All subjects underwent Epworth sleepiness scale (ESS) assessments before undergoing polysomnography (PSG). All subjects signed written informed consent forms for this study before data acquisition and the study protocol was approved by the Human Research Ethics Committee of West China Hospital, Sichuan University.

The mean square root of each voxel power spectrum was calculated as ALFF [slow-5 band (0.01–0.027 Hz), and slow-4 band (0.027–0.073 Hz)]. All ALFF maps were converted to z-maps by subtracting the global mean and dividing by the standard deviation. Subsequent statistical and correlation analyses were based on normalized ALFF plots. 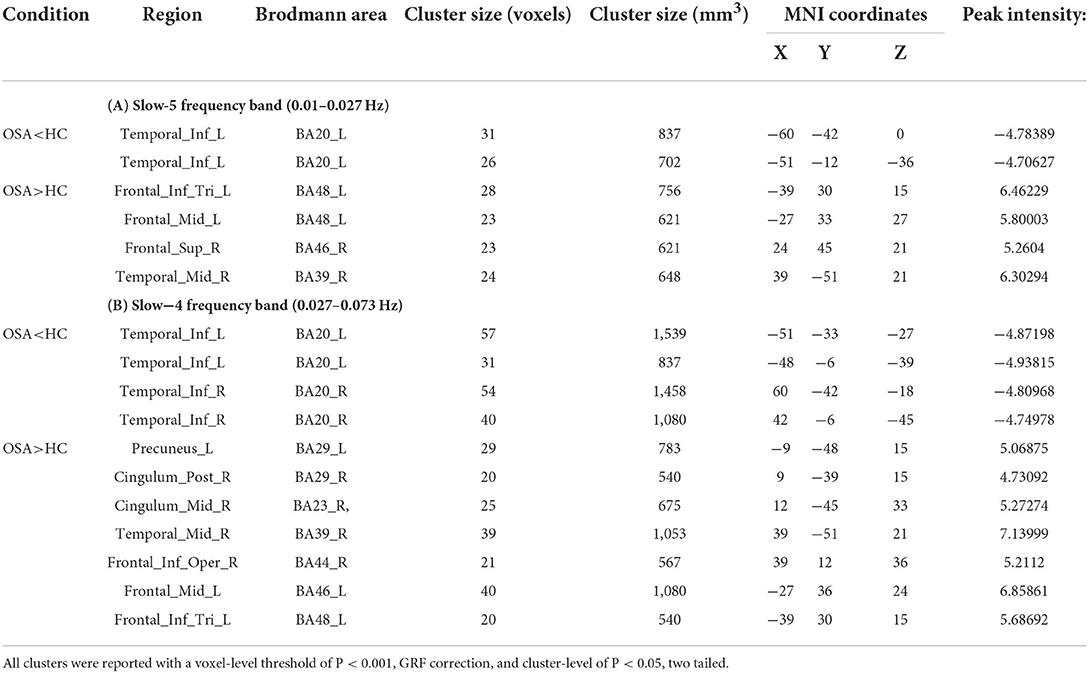 Table 2. The differences of ALFF in each frequency band between OSA groups and HC groups. 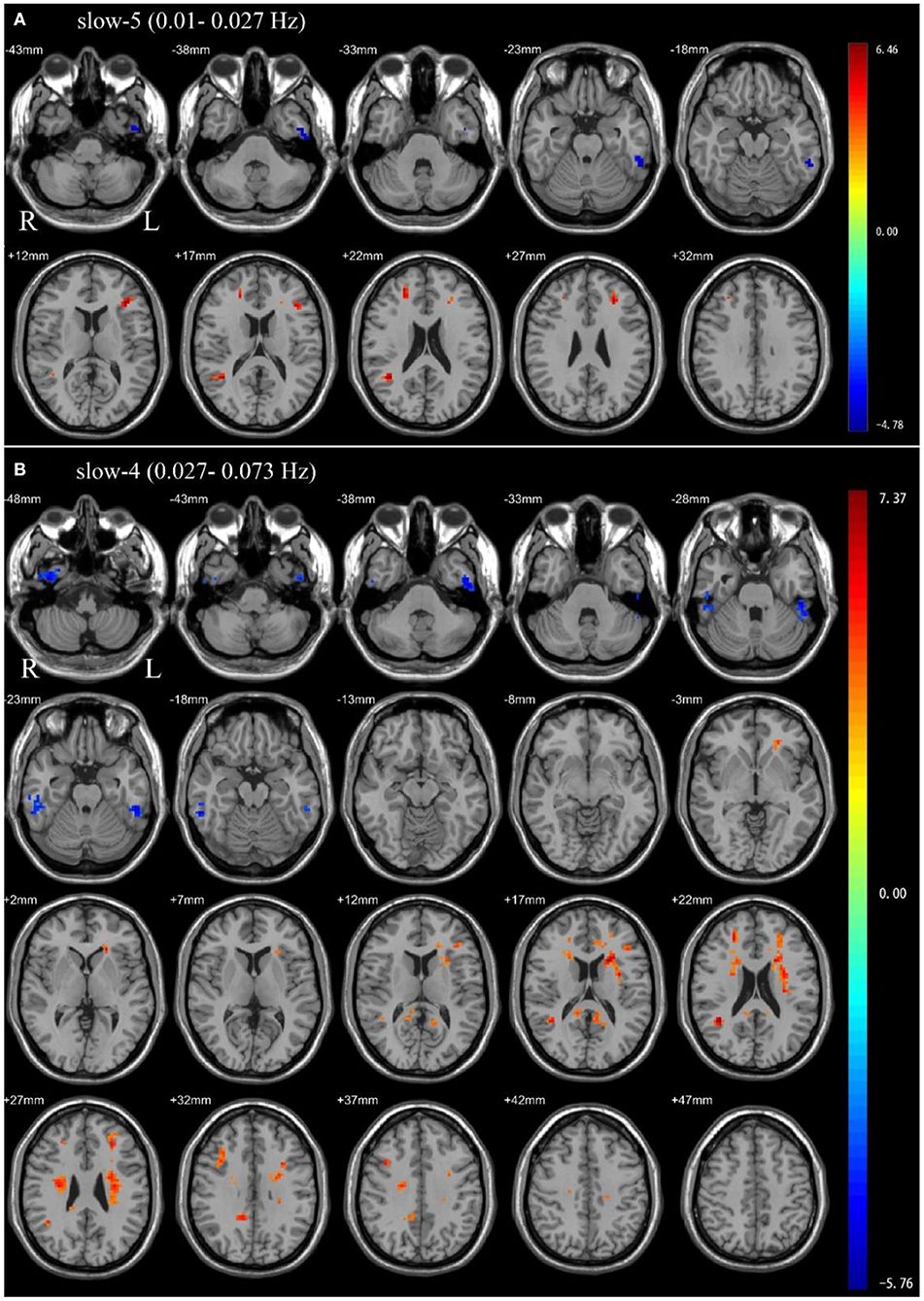 Table 3. The differences of ALFF in each frequency band between the pre-CPAP and post-CPAP group. 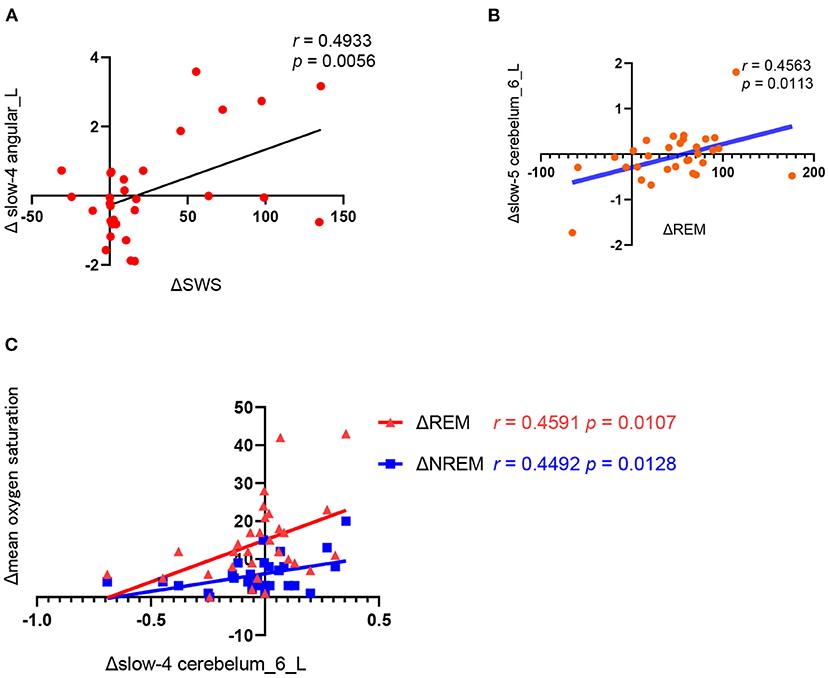 For the first time, we used the slow-4 and slow-5 frequency bands of ALFF to analyze the characteristics of resting-state frequency in OSA patients and explored the changes of ALFF values in OSA patients after one-night CPAP treatment. Our study found that there were differences in ALFF between the severe OSA group and the control group in many brain regions. In addition, ALFF changes in brain regions were also found after one-night CPAP treatment. Correlation analysis further revealed the relationship between the changes of ALFF in the brain region and the changes of polysomnography parameters. The above results are more obvious in the slow 4-band.

ALFF differences between the OSA and HC groups

We found that the signal in the left insula increased in the slow-5 frequency band after CPAP treatment. And in the slow-4, the signal increased in the left caudate area, while the signal reduced in the left calcarine area. The human insula is small but the insular cortex has extensive connections to the frontal, temporal, cerebellum, and limbic regions and is involved in a large number of different functions, cortical regulatory regions of emotion and sensorimotor function (38). Zhang's study (39) showed that the ALFF value of the insula was decreased under hypoxia, which may be related to the decreased ventilatory driving force. After one-night CPAP treatment, the blood oxygen saturation improved significantly, so the function of the insula was restored and the signal was enhanced. Therefore, the above study further supported our findings. Qin's study (19) in Tibetans found that the ALFF value of the right insula significantly increased in OSA patients. This study is inconsistent with our results, but the author explained in the article that Tibetans had strong adaptability, that is, they can improve the ventilation function to adapt to hypoxia. Neuroimaging studies suggest that insular dysfunction is thought to be a factor in airway collapse in OSA (40). There is reliable evidence showing that OSA is associated with structural and functional abnormalities of the central nervous system, especially damage in the insular cortex (40). In addition, the insular cortex receives pain and visceral sensory input and has a significant influence on the activity of the sympathetic and parasympathetic nervous systems, and is also involved in the control of certain autonomic functions, including respiration, blood pressure, and salivation (41). The insula regulates sympathetic nerve function, resulting in a decrease in the activity of sympathetic function, leading to hypertension and a high risk of cardiovascular disease in OSA patients. OSA can lead to an increase in blood pressure, but after CPAP treatment, the function of the insular cortex is restored. Therefore, the change of insular function caused by CPAP treatment may be an important mechanism of blood pressure decline in OSA patients after CPAP.

A correlation analysis was performed to identify the relationship between changes in brain function and polysomnography parameters. Our study showed that there was a significant correlation between the left angular and the SWS of sleep. The proportion of SWS in OSA patients after CPAP treatment increased significantly, suggesting that the angular signal was also enhanced after CPAP treatment. The angular gyrus plays an important role in regulating emotion, consciousness, memory and introspection (44). There is also a significant difference between the left angular gyrus and the normal group in the children's OSA study (32). We believe that angular gyrus may be more related to sleep depth. Because children have significantly more deep sleep than adults, it is easier to find differences in children's studies compared to normal people. After CPAP treatment, SWS in OSA patients increased significantly, and there was a significant correlation between SWS and memory improvement. We speculate that the impairment of angular gyrus function in OSA patients may be more related to the reduction of slow wave sleep caused by sleep apnea.

There are several limitations in the current study. Only male patients with severe OSA were included in this study, and female and mild-to-moderate OSA patients were not included. The sample size of cases and controls in this study was relatively small.

We found that the use of the slow-4 frequency band may be more specific in OSA studies. These results suggest that the severe OSA patients have frequency-related abnormal spontaneous neural activity, which may contribute to a better understanding of the pathological basis of OSA-related diseases and may provide potential therapeutic targets for OSA patients.

The studies involving human participants were reviewed and approved by the Human Research Ethics Committee of West China Hospital, Sichuan University. The patients/participants provided their written informed consent to participate in this study.

The Supplementary Material for this article can be found online at: https://www.frontiersin.org/articles/10.3389/fneur.2022.985321/full#supplementary-material

Copyright © 2022 Sun, Yang, Xie, Zou and Tang. This is an open-access article distributed under the terms of the Creative Commons Attribution License (CC BY). The use, distribution or reproduction in other forums is permitted, provided the original author(s) and the copyright owner(s) are credited and that the original publication in this journal is cited, in accordance with accepted academic practice. No use, distribution or reproduction is permitted which does not comply with these terms.