This article presents the method that won the brain-computer interface (BCI) competition IV addressed to the prediction of the finger flexion from electrocorticogram (ECoG) signals. ECoG-based BCIs have recently drawn the attention from the community. Indeed, ECoG can provide higher spatial resolution and better signal quality than classical EEG recordings. It is also more suitable for long-term use. These characteristics allow to decode precise brain activities and to realize efficient ECoG-based neuroprostheses. Signal processing is a very important task in BCIs research for translating brain signals into commands. Here, we present a linear regression method based on the amplitude modulation of band-specific ECoG including a short-term memory for individual finger flexion prediction. The effectiveness of the method was proven by achieving the highest value of correlation coefficient between the predicted and recorded finger flexion values on data set 4 during the BCI competition IV.

The goal of brain-computer interface (BCI) research is to reinstall control and communication capabilities for people with severe motor disabilities by translating brain signals into commands for a computer application or a neuroprosthesis (Wolpaw et al., 2002).

The neural electrophysiological signals currently being studied in the BCI domain ranges from electroencephalogram (EEG), electrocorticogram (ECoG), to local field potential (LFP) and single-unit activity/multi-unit activity (SUA/MUA). These different types of brain signals have their own characteristics and there is still controversy on the type of signals which is the most suitable for the BCI applications.

Electrocorticogram electrodes are placed over the surface of the cortex with typically 1 cm inter-electrode distance (Asano et al., 2005). On the one hand, ECoG provides a higher spatial resolution, a higher signal quality, and is more suitable for long-term use than the classical scalp EEG recordings. On the other hand, ECoG is less invasive than intracortical recordings like LFP, SUA/MUA which by far are used in a few BCI systems with human beings (Kennedy et al., 2000, 2004; Hochberg et al., 2006; Chadwick et al., 2011). By recognizing the merit of ECoG recordings, several groups of BCI researchers have carried out tests on the efficiency of using ECoG as control signals for human BCIs (Chin et al., 2007; Schalk et al., 2007; Pistohl et al., 2008; Sanchez et al., 2008).

Spatial resolution plays an important role in BCI (Sanchez et al., 2008). The fine spatial resolution of ECoG provides a better opportunity for directly decoding brain activities. Therefore, it is possible to implement direct neural interfaces which are difficult to be accomplished through EEG-based BCIs.

This paper describes the method we proposed to contribute to the ECoG data set from the BCI competition IV, which was dedicated to the task of decoding individual finger flexion in 2008. More precisely, for decoding individual finger flexion from ECoG, we noticed that a simple linear regression model of amplitude modulation (AM) of band-specific ECoG signals was efficient (Sanchez et al., 2008). Moreover, we made contribution to this method in two ways: firstly, we replaced the inverse operator in the solution of the linear model by the pseudo-inverse operator that should improve the stability of the model; secondly, we proposed to use a forward feature selection procedure to select the relevant frequency bands and electrodes (Langley, 1994). This method won the competition.

The task for data set 4 in BCI competition IV was to predict the finger flexion from ECoG recordings.1 Detail description about this data set can be found in Miller and Schalk (2008). Here, we only provide a brief summary.

This data set contains data for three subjects who were epileptic patients under surgical planning. Each subject had an electrode array placed subdurally on the surface of the brain in order to identify the epileptic focus. Each subject gave consent to participate in the recording experiments. While he/she performed a finger flexion task, the corresponding ECoG signals and the finger flexion time courses were recorded simultaneously. The electrode array was arranged in 8 × 6 or 8 × 8 grid (n.b., the exact location of the electrodes was unknown to the competitors because the electrode order had been scrambled during the preparation of this data set). There were 62, 48, and 64 channels for subject 1, 2, and 3, respectively.

Subjects were asked to flex a particular finger according to a visual cue (e.g., “index”) on a computer monitor. Typically for each cue, the subjects flexed the finger 3–5 times lasting 2 s followed by a rest period of 2 s. There were 30 movement for each finger resulting in 600-s recordings for each subject. The first 400-s recording were used as training set and the last 200-s recording used as testing set. Off-line analysis of the finger flexion time courses revealed that the movements of the last three fingers (i.e., middle, ring, and little fingers) were correlated in a considerable way.

The ECoG signals were recorded through the general-purpose BCI system BCI2000 (Schalk et al., 2004), bandpass filtered between 0.15 and 200 Hz and sampled at 1000 Hz. The finger movements were recorded using a dataglove and sampled at 25 Hz. Figure 1 provides an example of the visualization of the ECoG signals and the corresponding finger movement time course from subject 1. Due to space limitation, only a subset of ECoG electrodes is displayed. The correlation coefficient between the predicted and actual finger flexion time course has been used as the evaluation criterion for this data set in the competition. 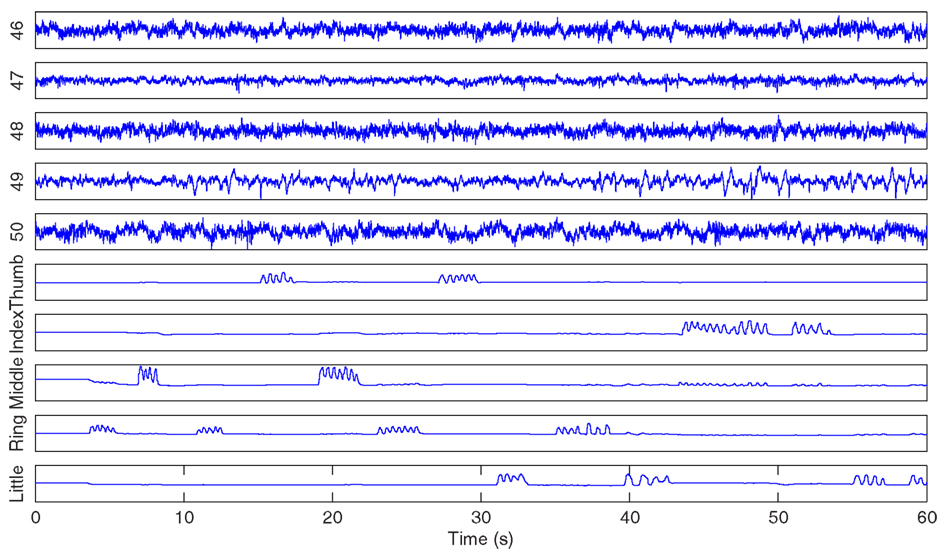 Figure 1. For illustration purposes only, ECoG signals from channel 46 to 50 (at the top) and the corresponding movement time courses for each finger (at the bottom) for the first 60 s of the training data set from subject 1 are displayed.

2.2.1.2. Amplitude modulation. Being inspired by the rate coding approach used in spike train decoding, Sanchez proposed a band-specific AM as the descriptor for ECoG signal decoding, which is defined as the sum of the square voltage of the band-specific ECoG signals v in a time window Δt:

2.2.1.3. Feature selection. Since the ECoG electrode array covered quite a large zone of cortical area, only a subset of electrodes was correlated to the task. Moreover, we had no prior information about which frequency band contributed more than the other. Therefore, for each finger and each subject, we use a forward feature selection procedure in a wrapper approach (Langley, 1994) to identify relevant AM features (i.e., good channel/frequency band couples). The whole set of AM features equals to 186, 144, and 192, respectively, for subject 1, 2, and 3 whose had 62, 48, and 64 channels (for three frequency bands). According to the forward selection procedure, we started from the empty set adding one by one the feature that improves the most the correlation among the remaining set of features. So, this procedure is suboptimal but the exhaustive procedure which tests all possible subsets is very time consuming here. Feature selection has been achieved and evaluated by splitting the original training set into a training set (3/5) and a validation set (2/5). The stopping criterion is satisfied when the correlation coefficient for the validation set does not increase or when a user predefined maximum number of features is reached (e.g., 10 for the results presented in Figures 2 and 3). 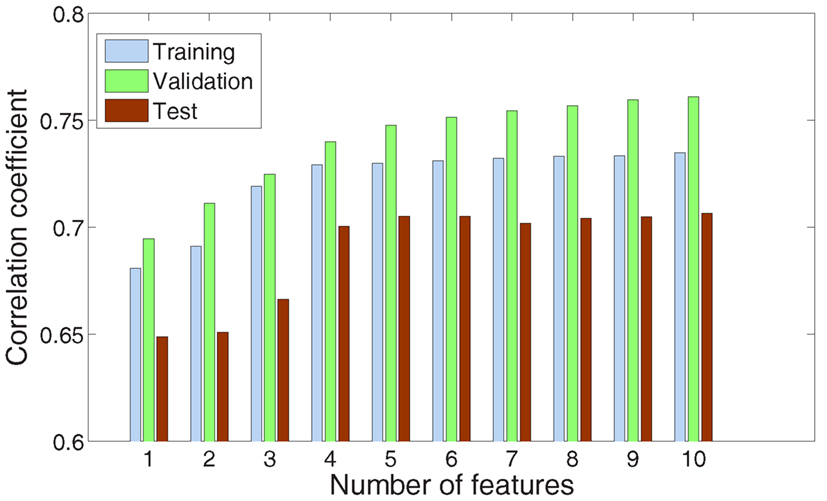 Figure 2. Evolution of the performance for the index finger of subject 1 according to the number of features given by the forward feature selection procedure. For each step, the three bars from left to right represent the correlation coefficient for the training, validation, and test set, respectively. 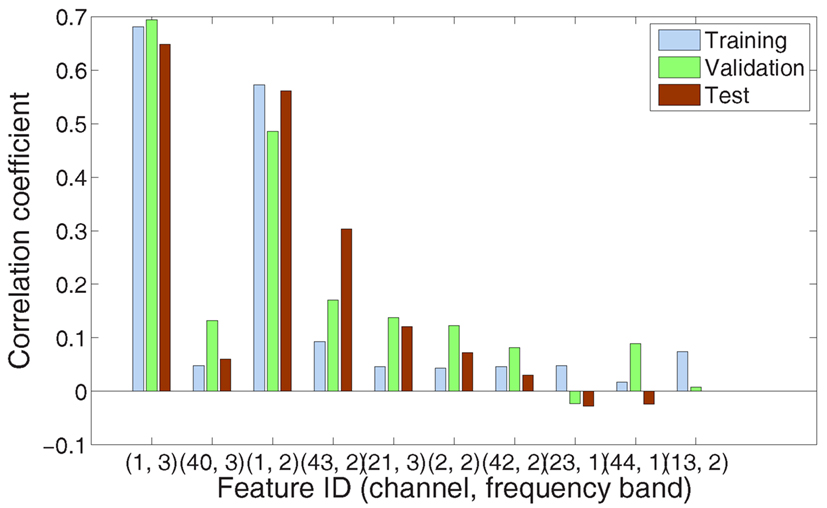 Figure 3. The X-axis shows the first 10 most relevant selected features, from left to right. Each feature is indicated by two elements: channel index and frequency band (1, sub-bands; 2, gamma band; and 3, fast gamma band). The Y-axis indicates the correlation coefficients of training, validation, and test set, respectively, regarding each feature individually.

The relationship between the features and the target signals or the interaction between features was not clear for this case. We simply applied a linear model as a decoder for its robustness property. Although, we noticed that other advanced methods have been used for ECoG signals decoding, for example, the Kalman filter (Pistohl et al., 2008), this method is not suited for our case because it needs a finger model which we do not have. The linear model we used here takes the following form:

where d is the finger position as measured by the dataglove. is the short-term memory AM feature vector k is the number of values stored. The best results have achieved when k = 25. The coefficients W of the model are trained with the Wiener solution:

where E is the expected mean. In order to improve the stability for estimating the coefficients of the Wiener model, we replaced the inverse operator in equation (3) by the pseudo-inverse operator.

Figure 2 gives an example on the evolution of the feature selection procedure for the index finger of subject 1. We found that there is no evident increment of the testing correlation coefficient by increasing the number of features after the first four features have been selected.

Figure 3 gives another point of view on the feature selection for the same subject and finger. This Figure emphasizes the individual prediction power of each feature selected during the first 10 cycles. Looking at the first three features, we learn that channel 1 was very useful (with two bands selected) and channel 40 was complementary. Last three features had lesser contribution to the task of decoding finger flexion.

Next, we summarized the prediction performance of this method using the testing dataset in terms of correlation coefficient between the predicted and recorded finger movement in Table 1.2 In order to highlight the effect of frequency-specific decomposition, the results based on the original ECoG signals (i.e., without band-pass filtering) are also provided for comparison.

Table 1. The prediction performance of the methods (with and without band-specific features) is provided in terms of correlation coefficient between the predicted and recorded finger movement for each finger and subject.

We also provided in Figure 4 an example for the predicted finger movement for subject 3 using the method based on band-specific ECoG AM features. For comparison, the corresponding time course of the recorded finger movement is plotted in the same figure. 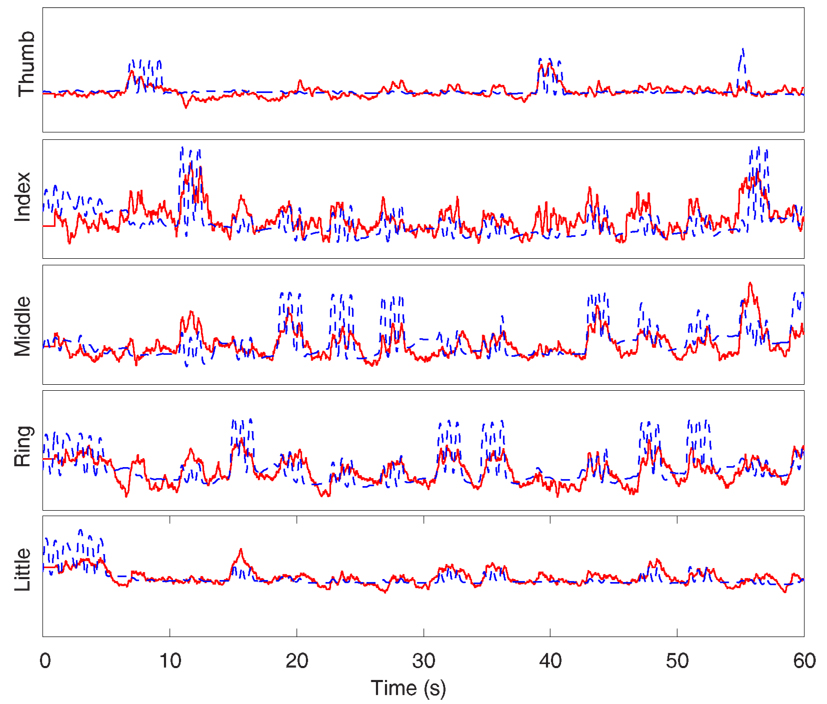 Figure 4. Time course of the predicted (solid red) and actual (dash blue) finger flexion for the first 60 s of the testing data set from subject 3.

We noticed that our method failed in some cases, especially for the middle finger of subject 1. It might be due to the considerable correlation between middle, ring, and little fingers. This draws our attention to the natural constraints that governs the movements of fingers (Wang et al., 2011a). In Wang et al. (2011a), it incorporates the prior knowledge about constraints that govern finger flexion through a prior model to improve the prediction accuracy. Their work achieved the higher correlation coefficient for this problem.

Copyright: © 2012 Liang and Bougrain. This is an open-access article distributed under the terms of the Creative Commons Attribution Non Commercial License, which permits non-commercial use, distribution, and reproduction in other forums, provided the original authors and source are credited.

The BCI Competition IV: How to solve current data challenges in BCI