Before computing correlations between conditions, many researchers subtract each voxel's overall mean response to all conditions from its response to each condition1. This is typically done independently for separate fMRI runs or datasets, for example even and odd runs. We refer to this step as “subtracting the mean pattern,” but it has also been called “normalization,” “subtraction of cocktail mean pattern,” or “cocktail blank normalization” (MacEvoy and Epstein, 2009; Op de Beeck, 2010).

Here, we discuss the effects of subtracting the mean pattern separately for two datasets2 in correlation analyses. Like other transformations of data, subtracting the mean pattern changes the relationships between conditions and therefore has consequences for results and their interpretation. Similar issues to the ones we discuss here have been described for the use of global signal covariates in univariate fMRI analyses (e.g., Aguirre et al., 1998), and more specifically in resting state analyses (e.g., Murphy et al., 2009; Saad et al., 2012). In fMRI multivariate correlation analyses, however, these changes in results and interpretation have been largely overlooked.

Effects of Subtracting the Mean Pattern on Correlation Matrices

To illustrate the consequences of subtracting the mean pattern, we simulated one example with patterns of responses to two conditions, faces and houses (Figure 1). We simulated the responses for two datasets, which would correspond to average responses to each condition in even runs and average responses in odd runs. The response patterns to faces were generated to be highly correlated across even and odd runs (r = 0.7). All other correlations were set to be approximately r = 0.3, to simulate the effect of a common activation pattern. 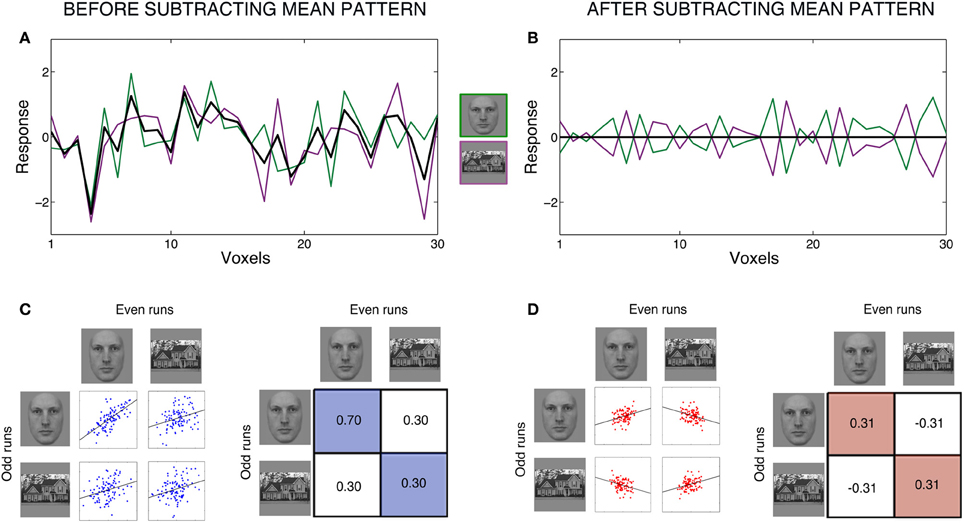 Figure 1A shows the raw data for each condition of one dataset, for example even runs, with voxels on the x-axis and response magnitude on the y-axis. We next explain all computations for one dataset, and they would be equally applied to the other dataset. Subtracting the mean pattern in Figure 1A corresponds to subtracting each voxel's mean response across the two conditions (black line) from its response to each individual condition. After subtracting the mean pattern from each condition, we obtain the patterns in Figure 1B. The mean is now zero at each voxel. Note that, at each voxel, the response to each condition is now dependent on the other condition: a voxel's response to one condition always has exactly the same magnitude but opposite sign as its response to the other condition. One clear way to see the creation of these dependencies is by looking at the correlations between patterns. In Figure 1A, the patterns of the two conditions had a correlation of r = 0.3, but in Figure 1B, the two conditions are perfectly anti-correlated, which will always be the case for two conditions. Furthermore, the response patterns to both faces and houses changed to become identical in variance.

G is a n–by–n matrix and In is the n–by–n identity matrix. The final, transformed, data matrix is given by Equation 2:

Yeven is the resulting data matrix for even runs and it has the same dimensions as Aeven.

Equation 2 shows that the response to each condition after subtracting the mean pattern is given by a linear combination of the responses to all the conditions. When we look at the variance of each condition after subtracting the mean pattern, we need to consider these same linear combinations—the variance of each condition is now distributed over all other conditions. These changes in response patterns of each condition within each dataset modify, in turn, the relationships between conditions across runs or datasets. These relationships correspond to the covariance or correlations between the rows of Yeven and the rows of Yodd (Yodd corresponds to the mean-pattern-subtracted matrix for odd runs and it is similarly derived using Equation 2).

Consequences for Analyses that are Based on Correlation Matrices

Correlation matrices are further used for other analyses, such as discrimination/classification analyses and Representational Similarity Analysis (RSA—Kriegeskorte et al., 2008a,b). Subtracting the mean pattern has consequences for the interpretation of these analyses.

Finally, some researchers have interpreted negative correlations as opposing patterns of activity for the conditions (Hanson et al., 2004; Weiner and Grill-Spector, 2010). Negative correlations, however, happen just because of the transformations that occur with subtracting the mean pattern, given that all correlations average to approximately zero (Figure 1D). Therefore, anti-correlations are not neurally meaningful (see Murphy et al., 2009).

We suggest that a suitable approach to the various problems created by subtracting the mean pattern is to skip this step, and work instead with the original data; this approach enables most common analyses. There might be cases, nevertheless, in which it is important to accurately estimate and remove the influence of a common activation pattern. Examples of these cases are when the covariance between all conditions is extremely high, or if researchers want to compare correlation magnitudes across regions4. Recently, Diedrichsen et al. (2011) proposed a novel method to estimate the true correlations between response patterns using a pattern-component model, and this method might be particularly useful for these cases.

This work was supported by a grant from the National Institutes of Health 5RO1EY013602-07 to Ken Nakayama. We thank the members of the Harvard Vision Lab, Jörn Diedrichsen, and Nikolaus Kriegeskorte for helpful discussions about the ideas and simulations presented here. We thank Katie Rainey and Sam Anthony for help with the equations. We thank Jörn Diedrichsen, Nicholas Furl, Laura Germine, and Matthew Longo for thoughtful comments on an earlier version of this manuscript.

2. ^Here, we use the term “dataset” to refer to half or part of the data to which subtraction of mean pattern is applied. For example, data from even and odd runs form two datasets. Data from different runs, sessions or experiments is also considered to be separate datasets. The correlation analyses described here are computed across datasets.

3. ^We note that subtracting the mean pattern results in having the mean of each column of Aeven equal to zero. Conversely, by using Pearson correlation, we are also automatically mean centering the rows of Aeven.

4. ^Note that this is not possible with raw data, given that different levels of common activation pattern across regions influences those correlations, nor it is possible after subtracting the mean pattern.

Copyright © 2013 Garrido, Vaziri-Pashkam, Nakayama and Wilmer. This is an open-access article distributed under the terms of the Creative Commons Attribution License (CC BY). The use, distribution or reproduction in other forums is permitted, provided the original author(s) or licensor are credited and that the original publication in this journal is cited, in accordance with accepted academic practice. No use, distribution or reproduction is permitted which does not comply with these terms.