It is well established that the intrinsic pacemaker mechanism that generates cyclical colonic migrating motor complexes (CMMCs) does not require endogenous nitric oxide (NO). However, pharmacological blockade of endogenous NO production potently increases the frequency of CMMCs, suggesting that endogenous NO acts normally to inhibit the CMMC pacemaker mechanism. In this study, we investigated whether mice with a life long genetic deletion of the neuronal nitric oxide synthase (nNOS) gene would show similar CMMC characteristics as wild type mice that have endogenous NO production acutely inhibited. Intracellular electrophysiological and mechanical recordings were made from circular muscle cells of isolated whole mouse colon in wild type and nNOS knockout (KO) mice at 35°C. In wild type mice, the NOS inhibitor, L-NA (100 μM) caused a significant increase in CMMC frequency and a significant depolarization of the CM layer. However, unexpectedly, the frequency of CMMCs in nNOS KO mice was not significantly different from control mice. Also, the resting membrane potential of CM cells in nNOS KO mice was not depolarized compared to controls; and the amplitude of the slow depolarization phase underlying MCs was of similar amplitude between KO and wild type offspring. These findings show that in nNOS KO mice, the major characteristics of CMMCs and their electrical correlates are, at least in adult mice, indistinguishable from wild type control offspring. One possibility why the major characteristics of CMMCs were no different between both types of mice is that nNOS KO mice may compensate for their life long deletion of the nNOS gene, and their permanent loss of neuronal NO production. In this regard, we suggest caution should be exercised when assuming that data obtained from adult nNOS KO mice can be directly extrapolated to wild type mice, that have been acutely exposed to an inhibitor of NOS.

Neuronal nitric oxide synthase (nNOS) KO mice (30–90 days of age) of either sex and their wild type control littermates were obtained from the Jackson Laboratory, Maine, U.S.A. Mice were euthanized humanely by isoflurane inhalation overdose, followed by cervical dislocation, as approved by the local animal welfare committee. The entire colon was removed from mice and placed in room temperature Krebs solution, which was constantly bubbled with carbogen gas (95% O2/5% CO2).

Mechanical Recordings from the Circular Muscle During Spontaneous CMMCs

We recorded the force generated by the circular muscle layer during each spontaneous CMMC, using an isometric recording transducer (Grass FT-03C; Grass, Quincy, M.A., U.S.A) connected via fine suture thread to hooks that pierced the muscle wall. Mechanical recordings were made under isometric conditions, using force transducers that were connected to two custom made preamplifiers (Biomedical engineering, Flinders University) and then to a Powerlab (model: 4/30; AD Instruments, Bella Vista, N.S.W, Australia). Labchart version 6.0 (AD Instruments, Australia) was used for analysis of data.

Intracellular recordings were made from circular muscle cells in the mid-distal region of isolated whole mouse colon, using an independently mounted micromanipulator (model M3301R; WPI Inc. Sarasota, FL. USA). All recordings were made in the presence of atropine (1 μM) and nifedipine (1 μM). Microelectrodes (i.d. 0.5 mm) were filled with 1.5 M KCl solution and having tip resistances of about 100 MΩ. Electrical signals were amplified using a dual input Axoprobe 1A amplifier and digitized at between 660 Hz and 1.5 KHz on a PC using Axoscope software (version 8.0; Axon Instruments, Foster City, CA, USA).

Measurements of the peak amplitude and interval between CMMCs and MCs were measured from isometric mechanical recordings using Chart Version 6.0 (AD Instruments, N.S.W. Australia) and intracellular recordings. Data in the results section are presented as means ± S.E.M. The use of “n” in the results section refers to the number of animals on which observations were made. Data sets were considered statistically significant if P values < 0.05 were reached. Statistical analysis of data was conducted for all experiments using within-fields/repeated measures analysis.

Mechanical recordings were made from the circular muscle of proximal and distal colon of isolated whole mouse colon in wild type control mice (N = 8). During these recordings, CMMCs were found to occur every 260.7 ± 40 s (Figure 1A; N = 8). When the NOS inhibitor, L-NA (100 μM) was applied to the colon it significantly increased the frequency of occurrence of CMMCs, such that their mean interval decreased to 121.7 ± 25 s (Figure 2; P < 0.05; Figure 1A; N = 8). 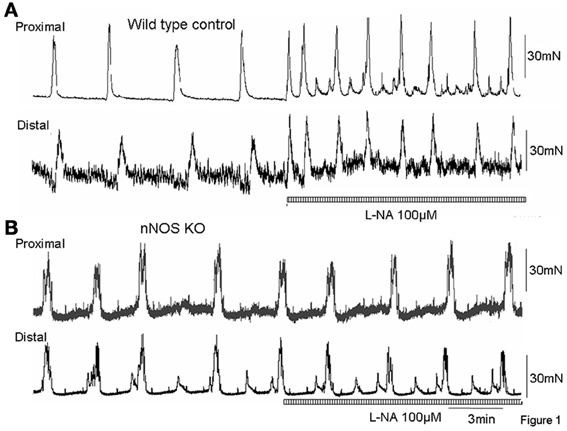 Figure 1. (A) Mechanical recordings from the circular muscle layer from proximal and distal colon of a wild type control mouse. CMMCs occur approximately every 3–4 min. Addition of the NO inhibitor, L-NA (100 μM) caused a significant increase in frequency of CMMCs. (B) in an nNOS KO mouse, surprisingly, CMMCs occur at a similar frequency as wild type control animals (as in A), but addition of the NOS inhibitor, L-NA has no effect confirming this is a KO mouse. 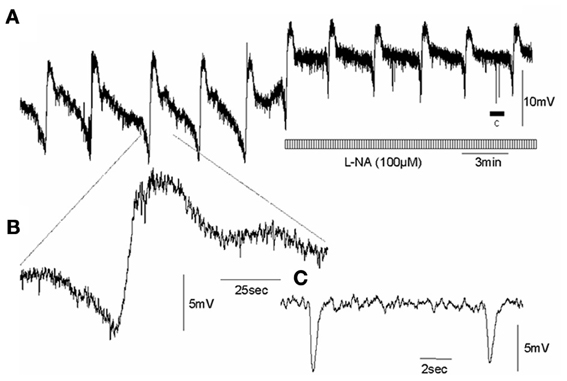 Figure 3. Effects of an inhibitor of NOS on intracellularly recorded MCs in the circular muscle layer of wild type control mouse whole colon, whilst in the presence of nifedipine (A) CMMCs occur with a pre-complex hyperpolarization and slow membrane depolarization. Addition of L-NA induced significant depolarization and increased the frequency of MCs. (B) shows a single myoelectric complex. (C) shows the period of spontaneous inhibitory junction potentials represented by the arrow c, in panel (A). Note, the spontaneous fast IJPs are unaffected by NOS blockade. 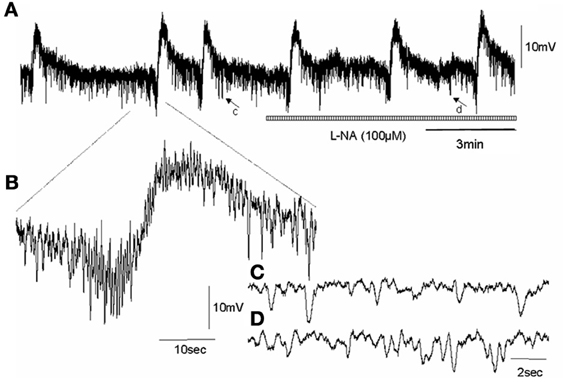 Figure 4. Shows effect of NOS inhibition on an intracellular recording of MCs in the circular muscle layer of an nNOS KO mouse colon, in the presence of nifedipine. (A) CMMCs occur with a pre-complex hyperpolarization and slow membrane depolarization in nNOS KO mice, similar to wild type controls. Unlike wild type animals, addition of L-NA did not induce any depolarization of the circular muscle layer and did not increase the frequency of MCs. (B) shows a single myoelectric complex. (C) shows a brief recording represented by the arrow c in panel (A) of spontaneous IJPs that occurs in Krebs solution prior the addition of L-NA. (D) shows the period of recording represented by the arrow in d in panel (A), of spontaneous inhibitory junction potentials in the presence of L-NA. There is no change, as expected, in the fast IJPs recorded in nNOS KO mice. 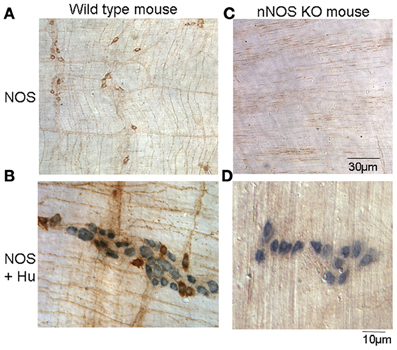 It is well known that endogenous NO release is not required for the generation of CMMCs or their underlying myoelectrical correlates in mouse colon, in vitro. However, endogenous NO potently modulates the frequency of CMMCs and maintains the RMP of the CM in a hyperpolarized state, during the intervals between CMMCs. The major aim of the current study was to determine whether nNOS KO mice would show CMMC characteristics that are similar to CMMCs recorded from wild type mice, when acutely exposed to an inhibitor of NOS. The major finding in this study is our unexpected observation that the frequency of CMMCs in nNOS KO mice was not significantly different from wild type control mice. Also, unexpectedly, the RMP of the circular muscle layer was not significantly more depolarized compared to control mice and the amplitude of the slow membrane depolarization underlying MCs was not different from control.

Why are CMMCs in nNOS KO Mice not Different from Controls?

We expected that CMMCs would occur more frequently in nNOS KO mice and MCs underlying CMMCs to be of reduced amplitude. The reason why we expected these results was because we had found previously that acute blockade of NOS caused these effects in wild type mice where nNOS is naturally expressed. However, when we studied nNOS KO mice, none of our expectations were supported by our data. The fact that in nNOS KO mice there was no overall difference in the major characteristics of CMMCs, or their underlying electrical correlates, suggests substantial compensation occurs throughout the life of these animals. This could occur via upregulation of other neurotransmitters/receptors, ion channels, or signaling pathways. Although our study did not reveal differences in the frequency of CMMCs between nNOS KO mice and wild type offspring, another study characterized the properties of CMMCs in nNOS KO mice and concluded that CMMCs did occur significantly more frequently in nNOS KO mice, than in wild type controls (Dickson et al., 2010). We are unable to explain these differences. Interestingly, the records presented in Dickson et al. (2010) (see Figure 2B) do not show any clear difference in CMMC frequency between nNOS KO mice and wild type siblings.

Whilst acute exposure of an NOS inhibitor in wild type mice caused an immediate and pronounced increase in CMMC and MC frequency, application of an NOS inhibitor to nNOS KO mice did not cause any detectable changes in CMMCs or MCs (Figures 3, 4). This is an important observation, because it suggests that nNOS is specifically responsible for modulating CMMC and MC frequency; and that iNOS and eNOS (both present in the mouse colon), do not play a detectable role in modulating CMMC characteristics, at least in vitro.

Based on our previous studies (Spencer et al., 1998a,b), we assumed that mice with a genetic deletion of the nNOS gene would show depolarized RMPs during the intervals between MCs. In fact, we did not find any difference between the RMPs in wild type control mice compared with nNOS KO mice. Indeed, when an NOS antagonist was applied to wild type mouse colon, the RMP between MCs depolarized significantly, consistent with previous findings (Spencer et al., 1998a, b). In contrast, addition of an NOS inhibitor to nNOS KO mice had no effect on RMP of the circular layer, nor, on the mechanical activity underlying CMMCs. This result in nNOS KO mice suggests that during the intervals between CMMCs, the RMP of the circular muscle layer is maintained in a hyperpolarized state by neurotransmitters other than NO and/or upregulation of other receptors, signaling pathways or second messenger systems. The nature of which requires further investigation. Although we could not demonstrate depolarized RMPs in nNOS KO mice, a recent study by Dickson et al. (2010) reported that the RMP of the circular muscle was significantly depolarized compared to wild type mice.

The findings of the current study show that the CMMC motor pattern recorded from nNOS KO mice (that lack neuronal NO throughout their entire life), do not provide comparable characteristics to wild type mice exposed to an NOS inhibitor. We suggest caution should be exercised when assuming, or expecting, that the motility patterns recording from nNOS KO mice can be directly extrapolated to, and compared with, the data obtained from wild type mice that have been acutely exposed to an inhibitor of NOS.

Copyright © 2013 Spencer. This is an open-access article distributed under the terms of the Creative Commons Attribution License (CC BY). The use, distribution or reproduction in other forums is permitted, provided the original author(s) or licensor are credited and that the original publication in this journalis cited, in accordance with accepted academic practice. No use, distribution or reproduction is permitted which does not comply with these terms.