Intracerebral hemorrhage (ICH) accounts for 15% of strokes, which is a lethal neurological disease (Qureshi et al., 2001; Mehndiratta et al., 2012). Treatment with ICH generally involves a surgical procedure to remove the hematoma, with varying and controversial efficiencies and prognosis. Due to the poor prognosis of ICH coupled with the extensive burden on the family of patients and society, exploring new ways to improve the clinical outcome of ICH is necessary. Recent studies showed that neuro-inflammation deeply relates to the progression of ICH-induced brain injury (Wang and Tsirka, 2005; Mracsko and Veltkamp, 2014). Progressive brain loss after stroke could be prevented and the clinical outcome could be improved by modulating the immune milieu after ICH (Wang et al., 2007).

Recently, Interleukin-4 (IL-4) cytokines has been demonstrated to effectively induce protective M2 cell subtype activation, which associated with tissue repair and composition of extracellular matrix (Gordon, 2003; Colton and Wilcock, 2010; Graeber, 2010). Also, pretreatment by IL-4, prevented, in a dose-dependent manner, neuronal cell injury induced by activated microglia (Chao et al., 1993). Here, in the rat ICH model, we focus on whether IL-4 could improve the outcome by modulation of inflammatory milieu and its influence on microglia/macrophage polarization after administration of IL-4.

The IL-4 (PeproTech Asia, # 400-04) was dissolved in PBS and stored at −20°C. IL-4 (0.8 μl each, final concentration is 0.25 μg/μl) was orthotropic intracranially injected 1 h post collagenase IV injection. The injection of IL-4 was controlled by stereotaxic frame and micro-injector. The injection coordinate is the same as that of collagenase IV injection. For control, the ICH+PBS group (vehicle group) has been injected with same volume of PBS (0.8 μl).

Before the surgery, the rats were anesthetized with 10% chloralhydrate. Then, we separated striatum from rat brains on ice. Each striatum was homogenized in RIPA lysis buffer (Thermo, USA) with the addition of protease inhibitor. The homogenate was centrifuged for 15 min at 12,000 rpm, 4°C. The protein concentrations were detected by Pierce™ BCA Protein Assay Kit (Thermo Scientific, # 23225). Fifty micrograms of total proteins were loaded onto 8% SDS-PAGE gel. Proteins were transferred onto polyvinylidene difluoride filters (PVDF) membranes, followed by blocking with 5% milk for 1 h at room temperature. Then, specific primary antibodies against iNOS (Rabbit; Abcam; ab3523; 1:3, 000); Arg 1 (Rabbit; Abcam; ab91279; 1:1, 000); and tubulin β (Rabbit; Bioworld Technology; BS1482; 1:1, 000) were incubated overnight at 4°C. After the incubation with secondary antibodies for 1 h, we used ECL (Thermo Scientific; PI32109) to visualize bands, which were then analyzed by the Quantity One (Bio-Rad; Version 4.6.2).

Also, we used ELISA kits (R&D Systems, USA) to detect the cytokines in the striatal protein extract including IL-1β, TNF-α, IL-6, and IL-13, according to the manual instruction.

The rats were anesthetized at day 3 after ICH. Trans-cardiac perfusion has been performed with 4% paraformaldehyde, followed by dehydration with 30% sucrose for 48 h. Coronal frozen sections (10 μm) were then harvested from the striatum. Brain sections were incubated overnight with primary antibodies: iNOS (Rabbit; Abcam; ab3523; 1:100); Arg 1 (Rabbit; Abcam; ab91279; 1:100); and Iba 1 (Goat; Abcam; ab5076; 1:200) at 4°C. Then, the slices were incubated at 37°C for 1 h with secondary antibodies: Fluor 594-conjugated (Donkey anti-Rabbit; Invitrogen; A-21207; 1: 500) and Fluor 488-conjugated (Donkey anti-Goat; Invitrogen; A-11058; 1: 500). Furthermore, sections were stained with DAPI (Roche; 10236276001; 1:20, 000). Images were acquired by using scanning fluorescence microscope (Leica Microsystems). For statistical analysis, we selected 6 slices for staining from each brain (n = 3 for each group). Six to ten digital microscopic images around the hematoma region were randomly applied in each slice. Double positive cell number was quantified and the average of sections from each brain was taken. The size of the image was measured by scanning fluorescence microscope. Results were expressed as the average number of cells per mm2.

The assessment of the modified Neurological Severity Scores (mNSS) including sensory, motor, reflex, and balance tests is a complex behavior test (Schallert et al., 1997; Mahmood et al., 2013). The maximum score of the test is 18, which means maximum deficit. The rats had been trained and assessed prior to surgery, to make sure the basal score is 0. Then, blind behavioral deficit tests were performed at 1, 3, 7, and 14 days after ICH, respectively.

Data were presented as mean ± SEM. Two-way analysis of variance (ANOVA) and Bonferroni post-tests were used to analyze the behavior data. The gene expression, western blotting, ELISA, and immunofluorescence data were analyzed by One-way ANOVA and Bonferroni post-tests. The results were considered statistically significant when P-value < 0.05. The statistical analysis was performed by GraphPad Prism 5 (San Diego, CA, USA). 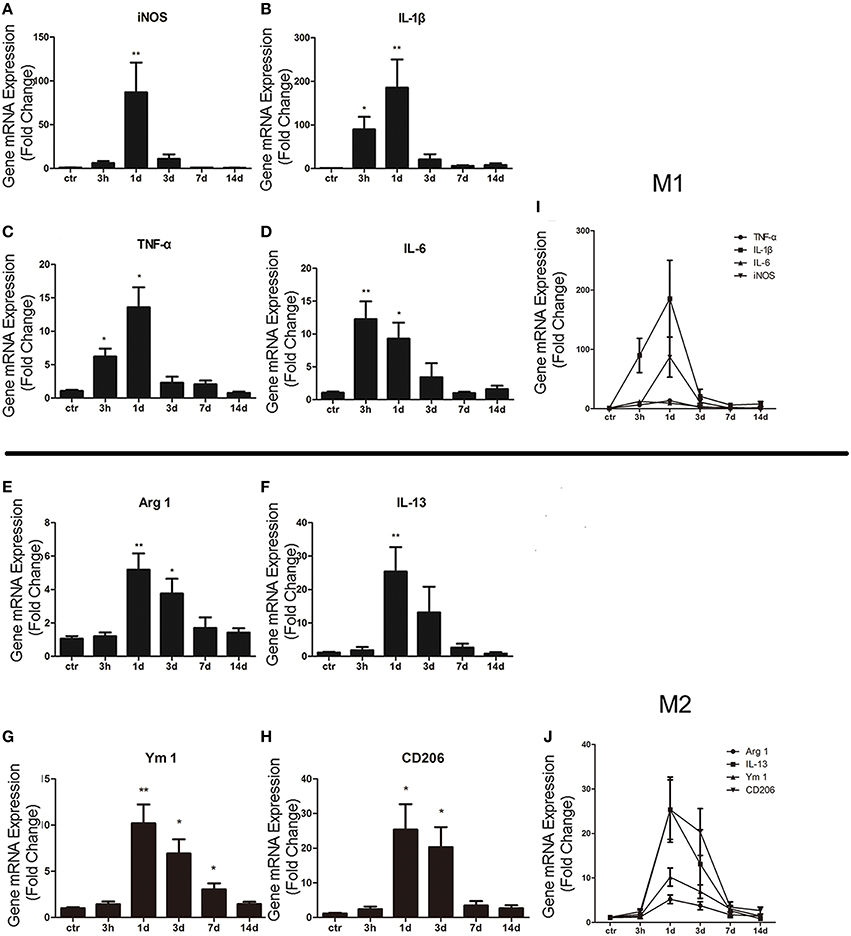 Then, we studied whether the administration of IL-4 could influence neurobehavioral function recovery in ICH model rats. We used the mNSS scale to evaluate neurobehavioral function between different groups. The rats were trained prior to surgery to ensure the basal level (score = 0). Then, the rat behavior score was evaluated and record at each time point post ICH. The evaluation process was blinded. We performed two-way analysis of variance (ANOVA) and Bonferroni post-tests to analyze the result of the behavior test. We found that there were significant differences between the ICH+IL-4 group and the ICH+PBS group at 3 (P < 0.05; n = 8), 7 (P < 0.01; n = 8), and 14 days (P < 0.01; n = 8) after ICH (Figure 2). Moreover, there was no significant difference between the ICH+PBS group and the ICH group (Figure 2). The results suggested that injection of IL-4 significantly improved the outcome of ICH model rats.

IL-4 Decreased the Activation of M1 Cells After ICH 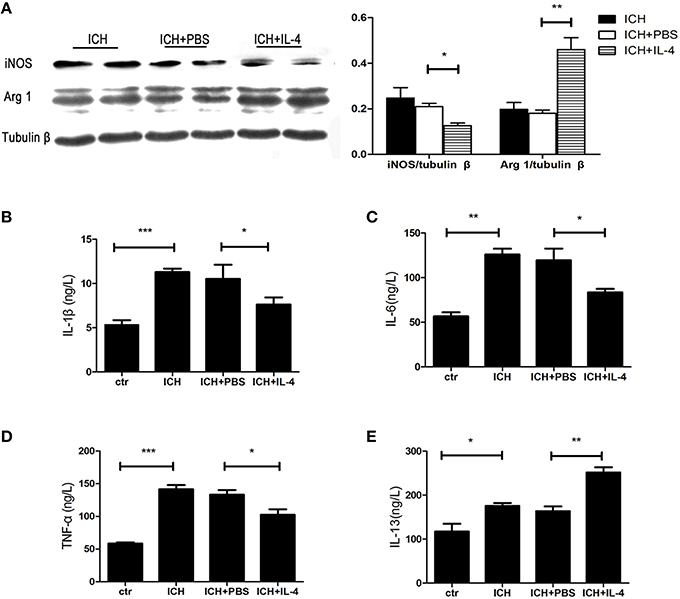 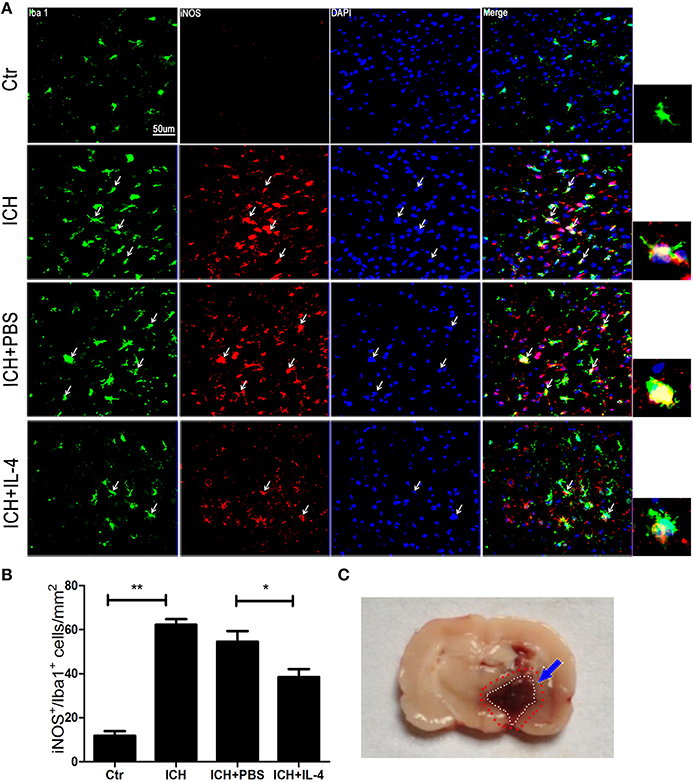 IL-4 Increased the Activation of M2 Cells After ICH

On the other hand, we also explored whether IL-4 influenced the activation of M2 cells. The M2 activation post IL-4 injection was investigated with western blot, ELISA and immunofluorescence, respectively. We found that IL-4 significantly induced Arg 1 expression (P < 0.01; n = 3) at 1 day after ICH (Figure 3A). Besides, ELISA results showed that injection of IL-4 enhanced the production of IL-13 (P < 0.01; n = 3) at 1 day after ICH (Figure 3E). In addition, at tissue level, the co-staining Arg 1/Iba 1 showed that Arg 1+/Iba 1+ cells (P < 0.01; n = 3) had been significantly increased in the ICH+IL-4 group (Figure 5) compare to ICH+PBS group at 3 days after ICH. These results demonstrated that IL-4 treatment could enhance the activation of M2 cell type after ICH. 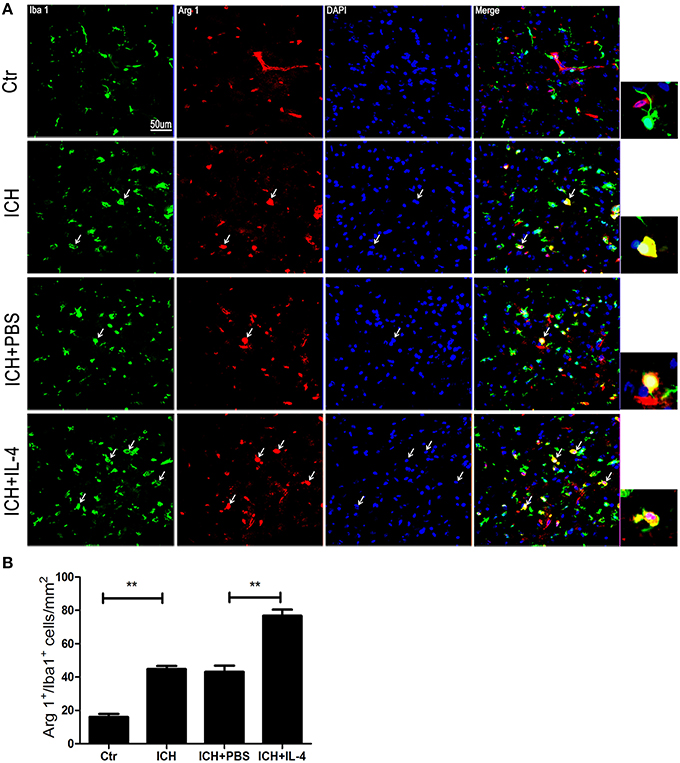 Recent studies demonstrated that immune responses play an important role in the brains injury after stroke (Dirnagl et al., 1999; Xie et al., 2014; Yang et al., 2015). For innate immune, when encountering insulting stimulations, microglia/macrophage was activated (Zhang et al., 2001). Consistently, our study showed that the microglia/macrophage was significantly activated after ICH. Specifically, we found that the expression levels of M1 markers (IL-1β, TNF-α, and IL-6; Mosser and Edwards, 2008; Kumar et al., 2013; Tang and Le, 2016) rapidly increased at 3 h, peaked at 1 day, and returned to normal levels after about 3 days, whereas those of M2 markers (Arg 1, IL-13, YM 1, and CD206) (Kumar et al., 2013; Mosser and Edwards, 2008; Tang and Le, 2016) increased at 1 day after ICH and returned after about 7 days. The profile of M1/M2 changes is similar with that of the cutaneous wound model, performed by Deonarine et al. (2007) They found that both of M1 and M2 markers increased at day 2, with M2 markers increased consistently at day 4 and 8 during the healing of cutaneous wound (Deonarine et al., 2007). In addition, recent studies demonstrated that microglia/macrophage activation was detected as early as 1 h following ICH in the collagenase injection model and within 4 h using whole blood injection (Xue and Del, 2000; Wang and Doré, 2007). In spinal cord injury, traumatic brain injury and ischemic injury, M2 type transiently detected at high levels before 7 days, however, M1 type maintained even up to 28 dpi (Hu et al., 2012; Chen Y. J. et al., 2015; Kumar et al., 2015). The profile of microglia/macrophage activation was also positively associated with the severity of the model.

Evidence showed that IL-4 plays critical roles in learning and memory in the normal brain (Derecki et al., 2010). In addition, IL-4 has been demonstrated to protect the brain from injury in the ischemic model (Xiong et al., 2011; Hu et al., 2015). Administration of IL-4 at the acute phase of ICH in this study could significantly improve neuro-behavior recovery in ICH rat model. However, further studies are needed to test the protective effects of IL-4 for fully elucidate the optimal time point and dose.

Interleukin-4 (IL-4) is a multifunctional cytokine, which could influence Th2 subset differentiation and polarization of microglia/macrophage (Kato and Nariuchi, 2000; Kobayashi et al., 2013; Orihuela et al., 2016). Recent research points to a dual role of microglia/macrophage in neuronal injury and recovery in stroke. In addition, microglia/macrophage own two phenotypes (M1/M2), which plays opposite roles during the repair after CNS damage (Kigerl et al., 2009). The M2 type is related to wound healing and tissue repair can secret protective cytokines, while the M1 type involves in the pro-inflammation response exacerbate neuronal demise (Banati et al., 1993). Furthermore, the M1 type cells have been shown to impair axon regrowth (Kigerl et al., 2009), while M2 polarization has been shown to be essential for efficient remyelination (Miron et al., 2013). In the present research, administration of IL-4 at early stage after ICH decreased M1 activation, while enhanced M2 activation. Besides, IL-4 inhibited the secretion of M1-related cytokines (IL-6, IL-1β, and TNF α), while promoted the production of M2-related cytokines (IL-13). Thus, IL-4 modulate immune responses after ICH through changing the activation phenotypes of microglia/macrophage, which may partially account for the recovery of ICH rat by IL-4 administration.

However, for clinical application, there are still some issues need to figure out. The recombinant proteins still have some limitations as therapeutic agents (Leader et al., 2008). Also, the therapeutic window and the delivery method of the IL-4 still need to be further studied.

In conclusion, our study showed that microglia/macrophage was activated after ICH. Administration of IL-4 could improve the functional recovery of ICH. Early injection of IL-4 could promote anti-inflammatory response which favors the repair via inhibiting M1 cell activation while enhance M2 cell activation after ICH. Therefore, administration of IL-4 in the early phase of ICH is likely to be one promising therapeutic approach for improve the outcome of ICH.

The manuscript has been approved by all authors. JY designed and performed the major study, analyzed data, and wrote the manuscript. SD and WH also performed part of research and data analysis. JH and SH helped the revision of this research. QZ and YZ designed the study and obtained funding for the study.

Copyright © 2016 Yang, Ding, Huang, Hu, Huang, Zhang and Zhuge. This is an open-access article distributed under the terms of the Creative Commons Attribution License (CC BY). The use, distribution or reproduction in other forums is permitted, provided the original author(s) or licensor are credited and that the original publication in this journal is cited, in accordance with accepted academic practice. No use, distribution or reproduction is permitted which does not comply with these terms.