Metal ions such as iron, zinc, and manganese are essential to metabolic functions, protein synthesis, neurotransmission, and antioxidant neuroprotective mechanisms. Conversely, non-essential metals such as mercury and lead are sources of human intoxication due to occupational activities or environmental contamination. Essential or non-essential metal accumulation in the central nervous system (CNS) results in changes in blood-brain barrier (BBB) permeability, as well as triggering microglia activation and astrocyte reactivity and changing water transport through the cells, which could result in brain swelling. Aquaporin-4 is the main water channel in the CNS, is expressed in astrocyte foot processes in brain capillaries and along the circumventricular epithelium in the ventricles, and has important physiological functions in maintaining brain osmotic homeostasis and supporting brain excitability through regulation of the extracellular space. Some evidence has pointed to a role of AQP4 during metal intoxication in the brain, where it may act in a dual form as a neuroprotector or a mediator of the development of oxidative stress in neurons and astrocytes, resulting in brain swelling and neuronal damage. This mini-review presents the way some metal ions affect changes in AQP4 expression in the CNS and discuss the ways in which water transport in brain cells can be involved in brain damage.

Several metals, including zinc, iron, and manganese are important as major or trace elements in cellular biological functions, acting as catalytic cofactors of enzymes (Kress et al., 2002), cellular antioxidants, and neuromodulators (Paoletti et al., 1997). In contrast, metals such as mercury, lead, cadmium, and nickel have no known biological functions. Both essential and non-essential metal ions may lead to brain damage when they accumulate in the central nervous system (CNS).

Non-essential metals are an important cause of human intoxication due to occupational exposure or air, soil, and water contamination, resulting in serious health problems (Valko et al., 2005; Park and Zheng, 2012), including severe hematopoietic, renal, and neurological conditions (Tchounwou et al., 2012). More recently, the role of glial cells in protecting neuronal damage caused by metal ion accumulation in the brain has been studied, showing that astrocytes have a central role in reducing neural excitotoxicity by taking up metals that cross the blood-brain barrier (BBB) (Ni et al., 2011; Noguchi et al., 2013), while microglia release mediators of inflammatory and immune responses when activated by metal ions. As a consequence, oxidative stress is generated in brain cells, and reactive nitrogen and oxygen species (RNOS) contribute to the apoptotic process, leading to neurodegenerative diseases (Yuste et al., 2015).

Metal intoxication often leads to increased water transport through the BBB and astrocytes, which could have important consequences on the expression of aquaporins in the brain. Aquaporins are integral membrane proteins that mediate the bi-directional transport of water through the cells, regulating the osmolarity of the intra- and extracellular medium. Aquaporins possess six membrane-spanning domains and five connecting loops. To date, thirteen main isoforms of aquaporins have been described (AQP0 to AQP12). The isoforms AQP3, 7, 9, and 10 are known as aquaglyceroproteins, which mediate the transport of glycerol, urea, and carbon dioxide in addition to water.

In the CNS, AQP1 is mainly found in the apical membrane of the epithelium of the choroid plexus and in the ependyma and pia (Nielsen et al., 1993), while AQP4 is the main water channel expressed in glial cells (Jung et al., 1994). In astrocytes, AQP4 is localized in the foot processes apposed to brain capillaries and along the circumventricular epithelium in the ventricles (Nielsen et al., 1997). The distribution of AQP4 in astrocyte processes is polarized, and the channels are assembled as orthogonal arrays of particles (OAPs; Yang et al., 1996), which share the same distribution as the inwardly rectifying K+ channel Kir4.1 (Nagelhus et al., 1999), showing an expressive role for AQP4 in regulating homeostasis of brain osmolarity and excitability via the extracellular clearance of K+.

Therefore, oxidative stress due to metal intoxication seems to have an important role in brain excitotoxicity and damage, with cells swelling as a consequence or cause of neuronal damage. This mini-review aims to bring an overview of the role of AQP4 during metal intoxication and cellular mechanisms involved in neuroprotection and toxicity of the brain.

Exposure to Non-Essential Metals and the Role of Astrocyte Water Transport in Brain Injury (Table 1, Figure 1)

Human intoxication due to mercury exposure is associated with occupational activities, including mining and smelting of cinnabar ore, environmental pollution, and consumption of seafood contaminated with mercury. Central nervous system symptoms related to mercury exposure include paresthesia, cerebellar ataxia, and decrease of cognition (Ye et al., 2016).

Table 1. Effects of metal-ions on aquaporin-4 (AQP4) expression in the brain. 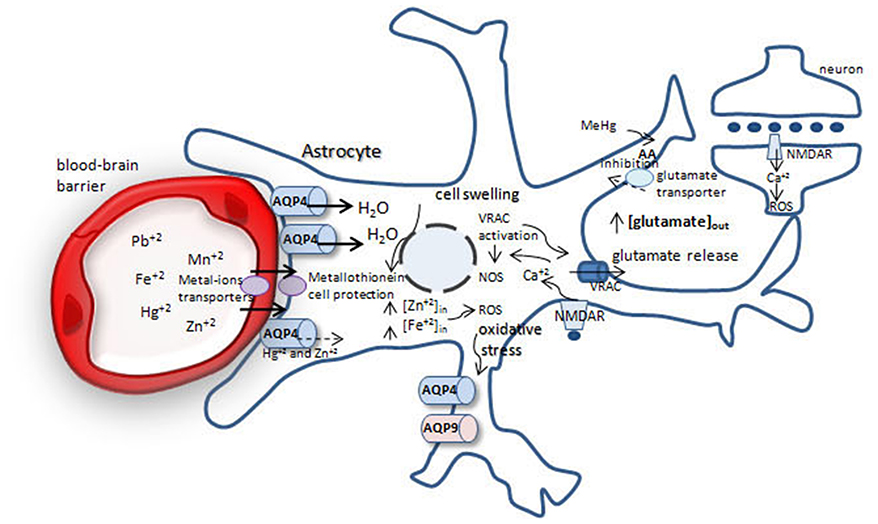 Elemental mercury is lipid-soluble and crosses the BBB by diffusion. In brain cells, it is oxidized through catalase and peroxidase to inorganic mercury (Hg+ and Hg2+). Methylmercury (MeHg) is an important source of human intoxication through seafood intake. MeHg is carried through the endothelial cells of the BBB by a neutral L-cysteine amino acid carrier, and is preferentially taken up by astrocytes and microglia. In astrocytes, MeHg promotes RNOS production through decreased availability of cysteine, reducing the antioxidant responses. Moreover, MeHg stimulates arachidonic acid synthesis, which in turn inhibits glutamate uptake by astrocytes, leading to neurotoxicity through ROS production (Ni et al., 2012).

Aquaporins are mercury-sensitive water channels. Most AQPs are inhibited by Hg2+, therefore decreasing cell water permeability (Agre et al., 1998), except for AQP6, which is activated by Hg2+ exposure (Yasui et al., 1999). The effects of mercury on cell's water transport were described in an early study in ghost erythrocytes treated with p-chloromercuribenzene sulphonate. In erythrocytes, mercury inhibited ~36% of water diffusion (Benga et al., 1985).

AQP4 has two isoforms (M1 and M23) that have been described as mercurial-insensitive water channels (MIWC), since their osmotic water permeability was not inhibited by mercury compounds (Shi and Verkman, 1996). In cells, the AQP4 monomer is normally oriented with the cysteine residue in loop D facing the intracellular side, preventing mercury binding to the channel and rendering AQP4 mercury-insensitive. However, mutagenic assays directed to the cysteine residues in the rat AQP4M23 isoform in proteoliposomes, in which the cysteine residue in loop D was randomly positioned inside or outside the proteoliposome membrane, demonstrated that when the AQP4M23 Cys178 in loop D faced the outside of proteoliposomes, mercury was efficient in reducing water permeability through AQP4. Covalent binding of mercury to the Cys178 residue might induce conformational changes in the AQP4 monomer, reducing water permeability (Yukutake et al., 2008). One in vivo study demonstrated the effects of 14 days of MeHg exposure (1.5 mg Hg/kg/day p.o.) on AQP4 expression in the brain of marmosets. MeHg intoxication increased AQP4 mRNA in the frontal lobe, occipital lobe, and cerebellum, while the AQP4 protein was increased in the occipital lobe and cerebellum (Yamamoto et al., 2012).

Lead (Pb) intoxication effects in the CNS include lethargy, memory deficits, encephalopathy, and coma. Lead poisoning in humans occurs by breathing dust or swallowing paint, water, or food containing lead. When bound to sulfhydryl groups of hemoglobin, lead reaches brain vessels and crosses the BBB by diffusion or competition with the same carrier system for other metal ions, as iron. Mechanisms of lead intoxication are mainly related to ROS production and disturbed ionic mechanisms, as lead can substitute for bivalent cations as Ca+2, Mg+2, and Fe+2, leading to neurotransmission deficits, impaired subcellular signaling, and oxidative stress (for review, see Needleman, 2004).

Manganese is an essential metal and a constituent of metalloproteins and mitochondrial enzymes in oxidative metabolism (Aschner, 2000). Manganese poisoning occurs mainly through occupational exposure of miners, industrial steel workers, or welders to heavy metals. High exposure to manganese results in neurological symptoms, including bradykinesia, dystonia, and gait disturbance. At a cellular level, manganese poisoning will disturb antioxidant defense and water transport in cells, leading to swelling (Erikson et al., 2004). Primary cultures of rat astrocytes treated with manganese showed increased AQP4 proteins in the plasma membrane. This effect was time-dependent, and there was no corresponding increase in mRNA. Conversely, astrocyte cultures transfected with siRNA targeted to AQP4 showed a significant reduction (~86%) of astrocyte swelling mediated by the AQP4 protein when exposed to manganese. The effects of manganese on cell swelling seem to involve mitogen-activated protein kinases (MAPKs) in astrocytes, since inhibition of ERK1/2/3 and p38-MAPK prevented AQP4 protein increases in the plasma membrane (Rao et al., 2010).

Zinc is an essential trace element for all cells, involved in various metabolic and signaling pathways as component of regulatory and catalytic proteins (Mizuno and Kawahara, 2013). In the brain, zinc is mostly bound to proteins and has important modulatory functions in glutamatergic synapses (Tamano and Takeda, 2011). Zinc intoxication is a consequence of inhalation, ingestion, or manipulation of metal. Free intracellular Zn2+, which is present during intoxication, generates oxidative stress in neurons and astrocytes and modulates neuronal activity.

In the brain, Zn2+ is mainly distributed in membrane-bound metalloproteins and presynaptic vesicles in glutamatergic neurons. When the amount of free Zn2+ increases in the brain, oxidative stress is triggered and activates nitric oxide synthetase (NOS), which in turn releases Zn2+ from intracellular stores and activates apoptosis. Increases in free Zn2+ promote cellular swelling (Kruczek et al., 2009). Cultured rat astrocytes exposed to a hypo-osmotic milieu (205 mosm/L) increased Zn2+ concentrations in the cytoplasm, mitochondria, and nucleus. Hypo-osmotic-dependent zinc increase in astrocytes seems to be trigged by Ca2+ and ROS intracellular signaling, as antagonists of the NMDA receptor prevent hypo-osmotic Zn2+ increase (Kruczek et al., 2009). Hypo-osmotic effects in astrocytes can be mediated in part by the recently identified AQP4e isoform (Moe et al., 2008). Rat astrocytes transfected with AQP4e and maintained in hypo-osmolar solution (200 mosm/L) showed a transitory increase of AQP4e membrane insertion, concomitant with diminished mobility of the AQPe-carrying vesicles. Depolymerization of vimentin filaments in the cytoskeleton under hypo-osmotic conditions would contribute to the AQPe mobility and membrane insertion (Potokar et al., 2013).

Iron is an essential metal in multiple metabolic reactions, including DNA synthesis, enzymatic reactions, and electron transport. Iron accumulation is very deleterious for brain functions due to its wide participation in metabolic reactions (Schipper, 2012; Rouault, 2013). Iron intoxication is not common; however, iron deposition in cells occurs frequently after intracerebral hemorrhage (ICH), a subtype of stroke with high morbidity and mortality in humans.

Cell damage as a result of increased Fe2+ is mediated by the NF-κB p65 protein, which activates ROS production and release of proinflammatory cytokines in astrocytes and microglia, respectively, and consequently increases AQP4 and AQP9 in astrocytes (Wang et al., 2015). These studies evidenced increased iron-dependent water permeability in astrocytes mediated by AQP4, showing a role for free iron brain deposition and increased risk of brain damage.

Metal ions including iron, zinc, and manganese are essential to metabolic functions, protein synthesis, neurotransmission, and antioxidant neuroprotective mechanisms. However, in the CNS, unbalanced essential metal ion amounts, as well as non-essential metal accumulations, are detrimental to brain function.

Toxic amounts of non-essential metals and breakdown of metal ion homeostasis result in changes in brain metabolism and water permeability. These changes are particularly related to increased AQP4 expression in the astrocytes surrounding the BBB, the development of oxidative stress in neurons and astrocytes, and brain swelling, leading to neurodegeneration.

Conflict of Interest Statement: The author declares that the research was conducted in the absence of any commercial or financial relationships that could be construed as a potential conflict of interest.

Copyright © 2016 Ximenes-da-Silva. This is an open-access article distributed under the terms of the Creative Commons Attribution License (CC BY). The use, distribution or reproduction in other forums is permitted, provided the original author(s) or licensor are credited and that the original publication in this journal is cited, in accordance with accepted academic practice. No use, distribution or reproduction is permitted which does not comply with these terms.

Chemicals in the environment and brain development: importance of neuroendocrinological approaches