The feeding center in the hypothalamus plays an important role in energy homeostasis. Neurons in the feeding center are activated or suppressed by the molecules reflecting peripheral energy status, including hormones such as ghrelin, leptin and insulin, and nutrients such as glucose, free fatty acids, and amino acids. These neuronal responses are integrated by intracellular signaling and the brain circuit; as a result, feeding and metabolism are controlled (Williams and Elmquist, 2012). Therefore, nutrient sensing is important for the control of energy balance.

Preparation of Single Neurons from ARC

Single neurons were prepared according to procedures reported previously (Kohno et al., 2003, 2007) with slight modifications. Briefly, mice were anesthetized with 10% pentobarbital (10 μl/g) injected intraperitoneally (IP) and decapitated. Their brains were taken out and brain slices containing the entire ARC were prepared. The entire ARC was excised from the left and right sides. The dissected tissues were washed with 10 mM HEPES-buffered Krebs-Ringer bicarbonate buffer (HKRB) containing 1 mM glucose. They were then incubated in HKRB supplemented with 20 U/ml papain (Sigma-Aldrich, P4762), 0.015 mg/ml DNase II (Sigma-Aldrich, D-4138), and 0.75 mg/ml BSA (Sigma-Aldrich, A2153) for 16 min at 36°C. This was followed by gentle mechanical trituration. Then, the cell suspension was centrifuged at 100 × g for 5 min. The pellet was resuspended in HKRB and distributed onto coverslips. The cells were kept in moisture-saturated dishes for up to 4 h at RT.

Cytosolic Ca2+ concentration ([Ca2+]i) was measured by ratiometric fura-2 microfluorometry in combination with digital imaging, as previously reported (Kohno et al., 2003, 2007). Briefly, after incubation with 2 μM fura-2/AM (Dojindo, Kumamoto, Japan, F016) for 45 min, the cells were mounted in a chamber and superfused with HKRB at 1 ml/min at 33°C. Fluorescence images due to excitation at 340 and 380 nm were detected every 10 s with a cooled charge-coupled device camera (ORCA-R2 C10600, Hamamatsu Photonics, Hamamatsu, Japan), and the ratio image was produced by an Aquacosmos (Hamamatsu Photonics). The data were obtained from single cells identified as neurons by previously reported procedures (Kohno et al., 2003, 2007); briefly, they have a relatively large diameter (≥10 μm), and their cell bodies are clear and round on phase-contrast microscopy. Cells with astrocyte-like flat morphology were excluded. The data were obtained from cells that met these criteria for neurons.

Criteria for [Ca2+]i Responses and Expression of Results

Agents were administered in the superfusion solution. When increases in [Ca2+]i took place within 5 min after adding agents and their amplitudes were 0.25 or larger, they were considered to have responded. In the studies using inhibitor and blockers, when the amplitude of [Ca2+]i responses with drug treatment was 40% or smaller than that of [Ca2+]i responses without drugs, inhibition was judged to have occurred. Each experiment was based on data prepared from at least 3 mice. A total of 896 neurons were examined.

Mice were anesthetized with 10% pentobarbital (10 ml/kg, IP). Then, mice were perfused transcardially with saline and 10% formalin (Wako, 062-01661). Brains were taken out and post-fixed overnight at 4°C. Then, they were transferred to phosphate-buffered saline (PBS, pH 7.4) containing 20% sucrose. The brains were frozen and kept at −80°C until sectioning. Coronal sections were cut at 25 μm using a cryostat (1:5 series). Sections were collected in, transferred to a cryoprotectant solution, and stored at −30°C.

Intracerebroventricular (ICV) Administration of Sucralose and c-Fos and POMC Immunohistochemistry

ICV administration was performed as reported previously (Sasaki et al., 2010) with slight modification. Mice were anesthetized with 10% pentobarbital (7 μl/g, ip) and 5% xylazine (10 μg/g, ip) and guide cannula (C315G, Plastics One, Roanoke, VA) was implanted to the right lateral ventricle, and secured to the skull with dental cement (QUICK RESIN, SHOFU, Kyoto, Japan) and adhesion bond (Loctite 454, Henkel, Dusseldorf, Germany). The cannula tip was located 0.2 mm caudal and 1.0 mm right to bregma and 2.5 mm below the skull. More than 1 week after the surgery, mice that had recovered to 90% of their preoperative weight were used for injection. PBS or 0.085 mg sucralose diluted in PBS (0.5 μl) were injected. Thirty min after injection, mice were perfused transcardially with saline and 10% formalin. 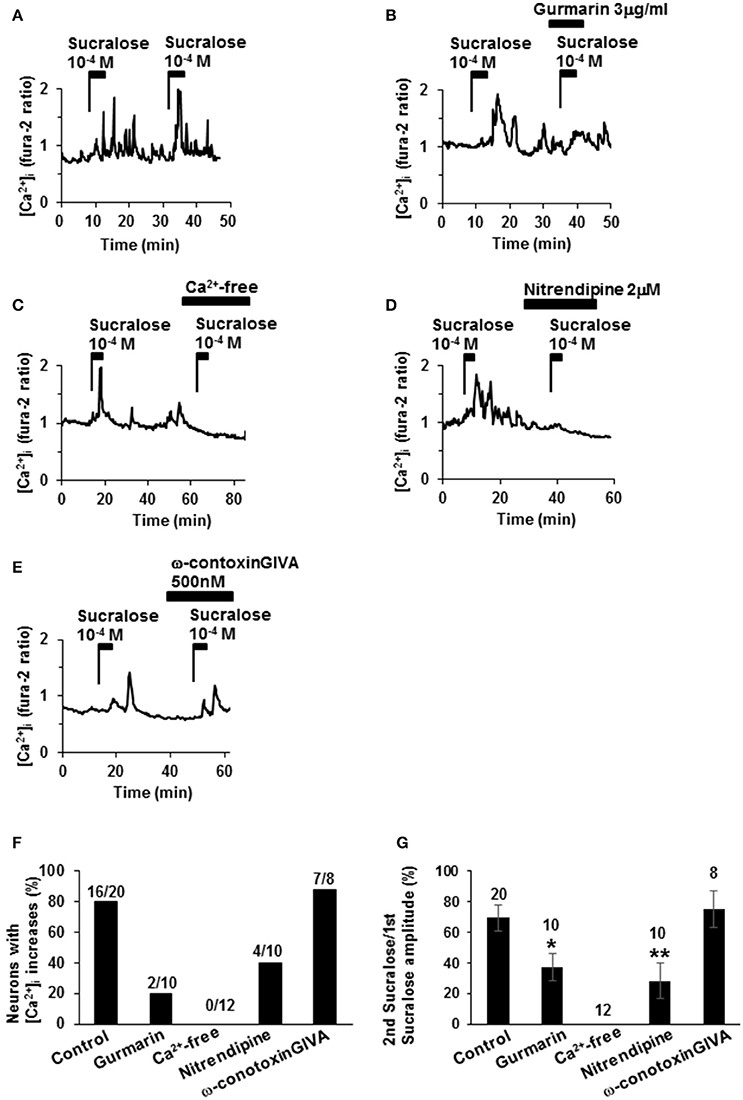 The relationship between sucralose-response and glucose response was examined. Among 22 neurons that responded to sucralose at 10−4 M, 12 neurons (55%) exhibited [Ca2+]i increases in response to elevating the glucose concentration from 1 to 10 mM, the response used to judge the glucose-excited neurons (Figures 3A,C). On the other hand, among 22 neurons that increased [Ca2+]i in response to elevating glucose, 12 neurons (55%) exhibited [Ca2+]i increases in response to sucralose at 10−4 M (Figures 3A–C). Notably, there were no sucralose-responding neurons in glucose-inhibited neurons that decreased [Ca2+]i in response to elevating the glucose concentration. These data indicate that more than half of sucralose-responding neurons are glucose-excited neurons, while none of them are glucose-inhibited neurons. These data emphasize the anorexigenic property of sucralose-responding neurons. To explore the contribution of sweet taste receptor to glucose responses, the effect of gurmarin on response to high-glucose was examined. When glucose concentration was increased from 1 to 10 mM, continuous increases of [Ca2+]i were observed in 11 out of 11 glucose-excited neurons (100%; Figures 3D,F). The administration of gurmarin at 3 μg/ml suppressed [Ca2+]i increases induced by 10 mM glucose in 8 out of 12 neurons (67%; Figures 3E,F). Area under the curve of fura-2 ratio amplitudes in the presence of gurmarin was significantly decreased compared to those in the absence of gurmarin (Figure 3G). These data suggest that excitation induced by high-concentration of glucose is mediated in part by sweet taste receptor. 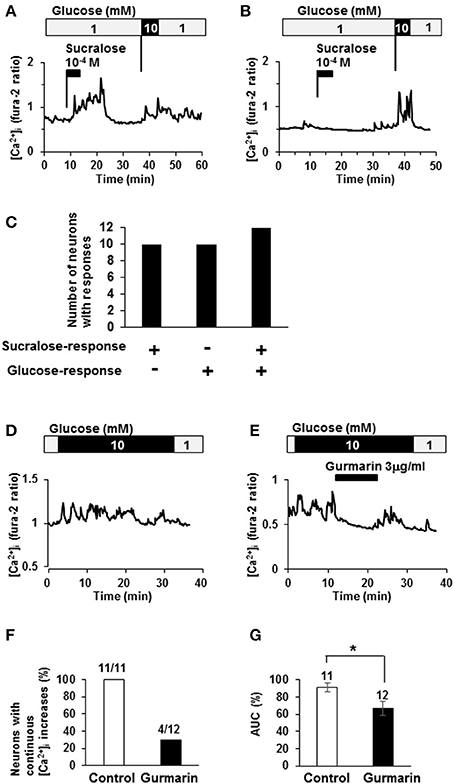 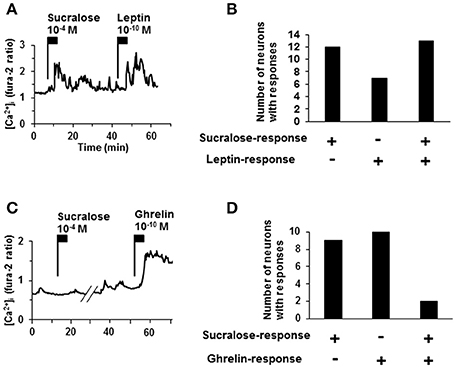 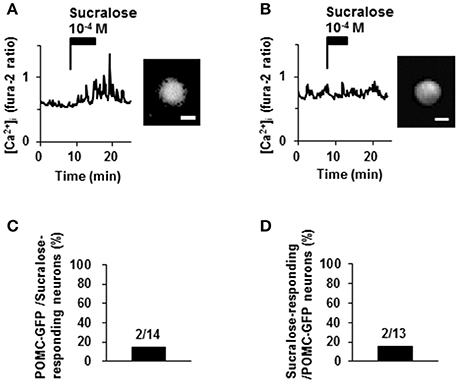 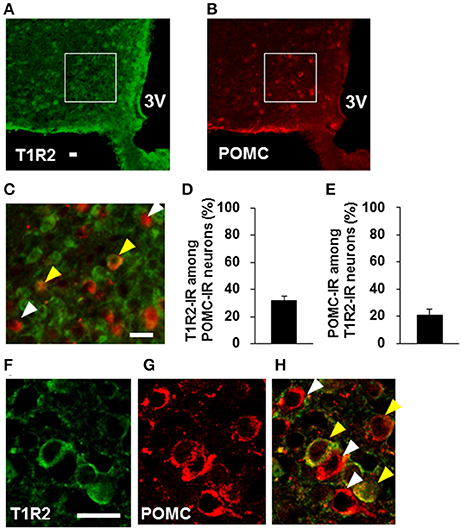 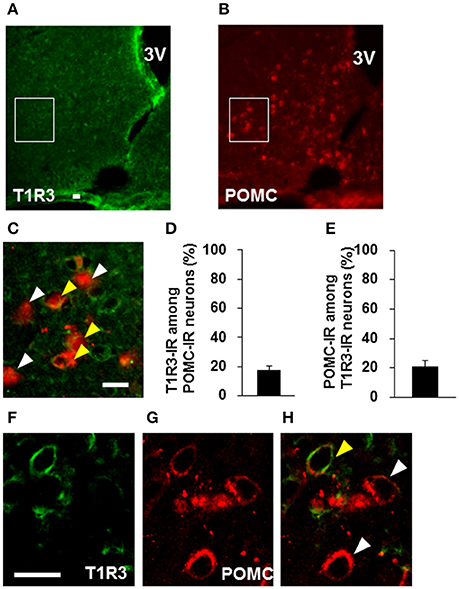 Expression of c-Fos after ICV Administration of Sucralose 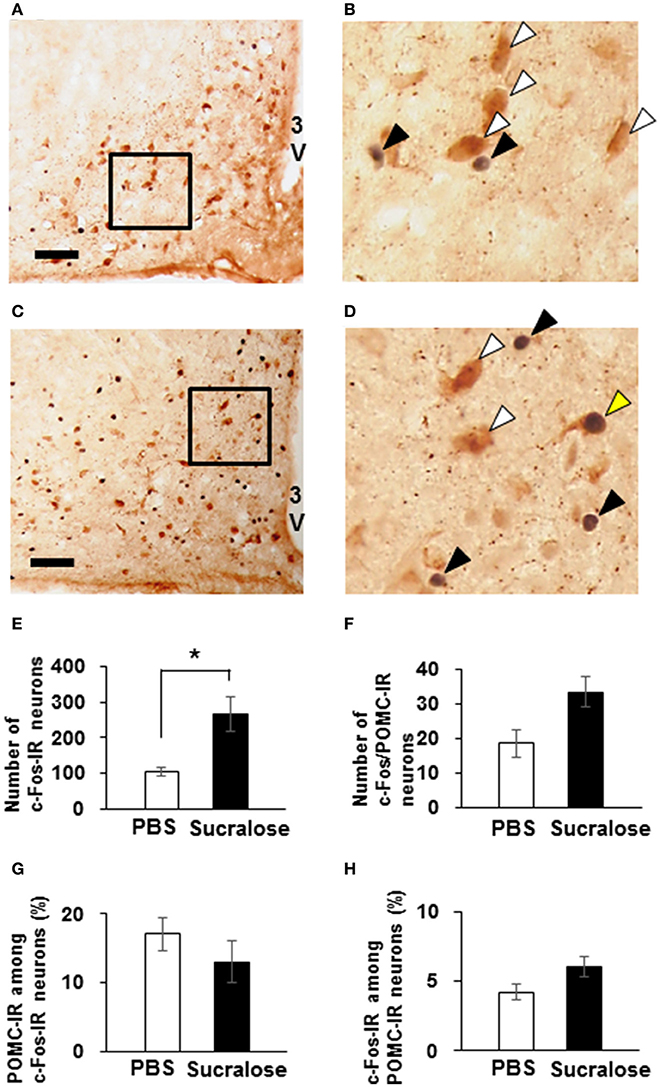 In this study, we found that an artificial sweetener, sucralose, at 10−5–10−2 M increases [Ca2+]i in ~15% of ARC neurons through the sweet taste receptor-mediated pathway. Sucralose-induced [Ca2+]i increases were dependent on the extracellular Ca2+ influx at least partly through the L-type Ca2+ channel. A large part of sucralose-responding ARC neurons were high-glucose- and leptin-responsive neurons. In addition, response to high concentration of glucose was contributed by sweet taste receptor. Low percentage of POMC neurons were included in sucralose responding neurons, c-Fos expressing neurons, and sweet taste receptor-expressing neurons in the ARC. These findings indicate that sweet taste receptor mediated neuronal activation occurs mainly in high-glucose-and leptin- responsive non-POMC neurons in the ARC, which may contribute to the neuronal activation in response to high-glucose. These mechanisms could be implicated in feeding regulation and energy homeostasis.

We found that sucralose at 10−5–10−2 M induces [Ca2+]i increases in ARC neurons. Similarly, it is reported that sucralose at 10−3–5 × 10−2 M induces [Ca2+]i increases in MIN6 cells, a mouse pancreatic β-cell line (Nakagawa et al., 2009). Additionally, sucralose at 2 × 10−4–5 × 10−3 M induces GLP-1 secretion from NCI-H716 cells, a human enteroendocrine L cell line (Jang et al., 2007). These data support the assumption that sucralose may induce the excitement of cellular activity in a sweet taste receptor-dependent manner. Higher sensitivity of ARC neurons to sucralose could be related to the lower concentration of sweet taste molecules, such as glucose, in the brain compared to the periphery. Glucose concentration in the brain is estimated to be lower than that in blood (Routh et al., 2014).

Sucralose-induced [Ca2+]i increases in ARC neurons were dependent on extracellular Ca2+ influx, especially through L-type Ca2+ channel. Of note, sucralose-induced intracellular signaling could just be a part of the signals that may be induced at the downstream of sweet taste receptors. In pancreatic β-cells and intestinal GLP-1-secreting cells, a variety of sweeteners induce diverse patterns of intracellular signals (Nakagawa et al., 2013; Ohtsu et al., 2014).

It is reported that only a small percentage of orally administrated sucralose are absorbed from the intestinal tract in rats, and that most of intravenously administrated sucralose is excreted in urine and feces within 24 h in rats (Sims et al., 2000). It is not yet known if the portion of blood sucralose penetrates the blood-brain barrier (BBB), and the effect of orally ingested sucralose on the hypothalamus is unknown (Schiffman and Rother, 2013). BBB in the ARC is morphologically different from other area (Shaver et al., 1992; Rodríguez et al., 2010; Ciofi, 2011) and is compromised in mice from obese mother (Kim et al., 2016). These characteristics of BBB in the ARC might increase the permeability of sucralose. To clarify the potential side effect of sucralose consumed with foods and to explore the therapeutic application of sucralose, further studies are required.

In this study, we found that the sweet taste receptor is implicated in activation of high-glucose- and leptin- responsive neurons in the ARC, the majority of which are non-POMC neurons. Further, approaches including genetically modified mouse and non-antibody staining could uncover the physiological role and localization of sweet taste receptor in the ARC. Sweet taste receptors may play an important role in coupling systemic factors to neuronal activity and energy homeostasis.

This work was supported by research grants for DK from Nestlé Nutrition Council Japan and Suzuken memorial foundation.

Copyright © 2016 Kohno, Koike, Ninomiya, Kojima, Kitamura and Yada. This is an open-access article distributed under the terms of the Creative Commons Attribution License (CC BY). The use, distribution or reproduction in other forums is permitted, provided the original author(s) or licensor are credited and that the original publication in this journal is cited, in accordance with accepted academic practice. No use, distribution or reproduction is permitted which does not comply with these terms.